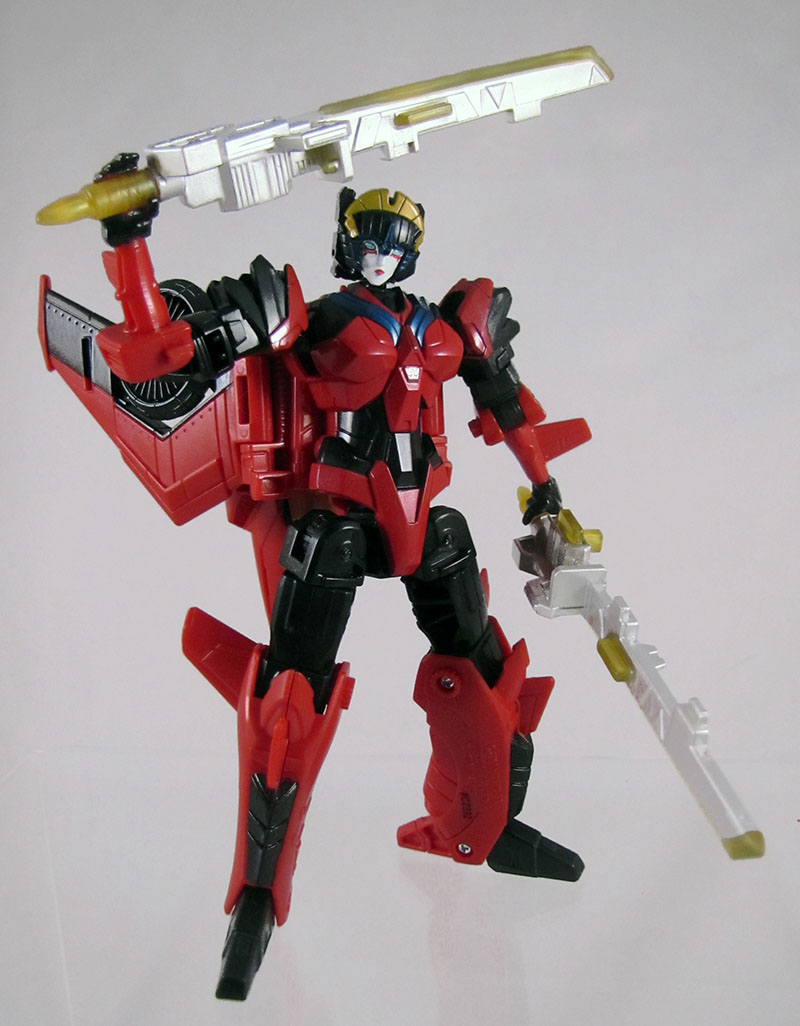 It's Windblade o'clock!  That's kind of like 4:20, but slightly more often.  And that's fine with me.  I'm always up for additional Windblades.  Keep piling 'em on, Hasbro.  I've got a house with shelves to fill.
Last year, there was an SDCC exclusive Windblade, technically part of the Titans Return line, but since she was a redeco of Robots in Disguise Windblade, she was the only toy out of the three in her box set that wasn't actually a Titan Master-compatible person.  She wasn't a headmaster!  And while I was grateful for Additional Windblade, I also kind of wish she got a proper Titans Return toy with a head-person head.
WELL THAT TOY IS HERE
Suddenly, out of no where, unbeknownst to Secret Inside Sources That Know The Entirety Of The Next Toyline Before It Even Hits Shelves, there was a Titans Return Windblade toy.  One day Hasbro's like, BAM!, surprise, Windblade in yer eyes!  So many rumor lists, and she wasn't on any of them.  This was an enjoyable experience, like how at SDCC Hasbro got to actually tell us what Power of the Primes was about and what the toys were and everything, without us knowing everything ahead of time. 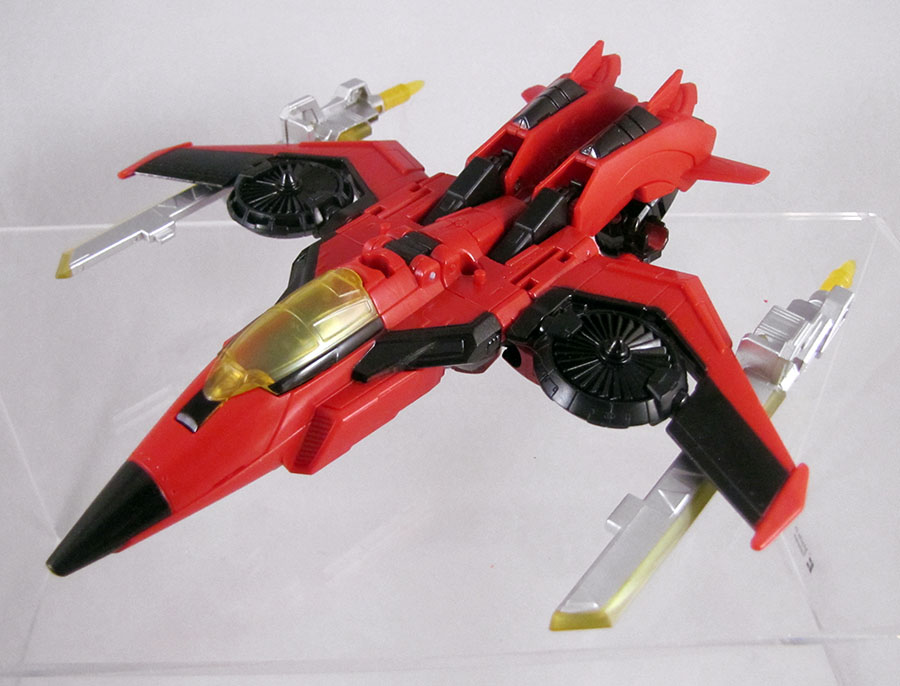 which lasted about five days before the entire rest of the toyline was leaked, but whatever, it was a nice moment
Titans Return Windblade shares some parts with Scourge/Highbrow (thighs, feet, biceps, some internal transformery joint stuff), but the rest of her is new.  The amount of new is nice, especially considering Windblade's in the penultimate wave of Titans Return deluxes.  Usually by this point they're just spittin' up redecoes.  Some people mumble about her wide upper arms or her blocky thighs, but I... just... can't... bring... myself... to... care.  The toy looks good.
The original Windblade toy got a lot of flak for being difficult to stand.  The second main Windblade toy, the Robots in Disguise version, is better at standing.  This toy, though, stands the eff up.  This is mostly due to the no-nonsense way her legs are built.  They're just big and relatively chunky (for a Windblade toy) and there's feet and that's it.  These legs don't try to be fancy.  You could probably throw the toy across the room and it'd still stand. 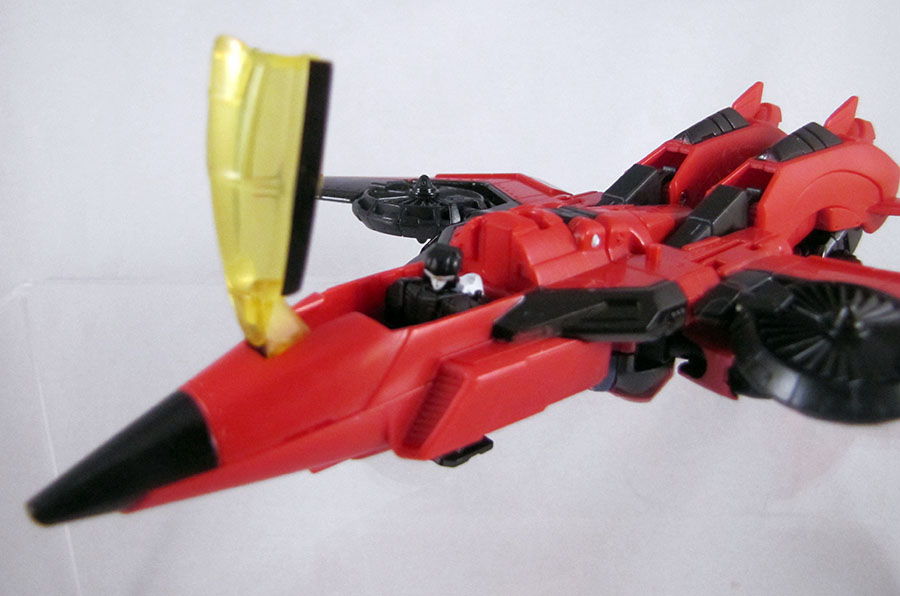 Titans Return Windblade also has a more satisfying transformation to jet mode.  It's not as fiddly, and everything fits solidly in place.  This toy is just a formidable chunk of Windblade.  Not as many bells or whistles (there's no scabbard and no removeable head fan), but what's here gets the job done.  You can, if you wish, borrow the scabbard/sword from a previous Windblade toy.  There are slots in the toy's thighs that accomodate tabs from the older scabbards.  Hooray for standards in toy construction, requiring those slots at most joints. 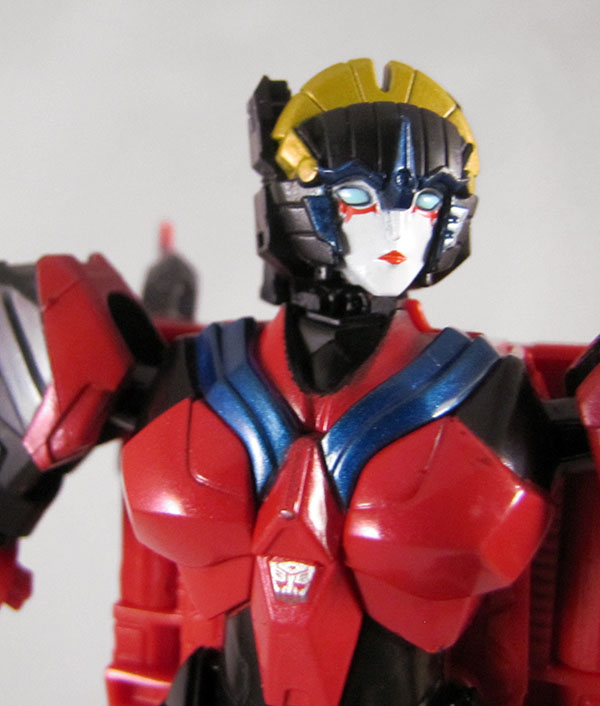 Windblade's head transforms into a little lady robot named Scorchfire.  She can sit in Windblade's cockpit or ride in the combined sword... thing her swords make when they mash together.  It's like a flying forklift that's all fork and no lift.
If you want a solid-ass Windblade toy, this might be your best option.  If you want a Windblade that looks a little more accurate to her proportions in fiction but you don't care if she takes some effort to stand upright, then maybe look into Takara's reissue of the original that's coming next year.  If you want a Windblade that shuts up and goes away but not really because you're lonely, you might be Starscream.
man, we better get a windblade in power of the primes so we can have one that's a combiner limb, i need windblades in all the various transformers gimmicks and combiner wars left me out to dry
Tags: generations, titans return, windblade
View/Post Comments
Windloop Multiblade
Posted August 3, 2016 at 5:45 am 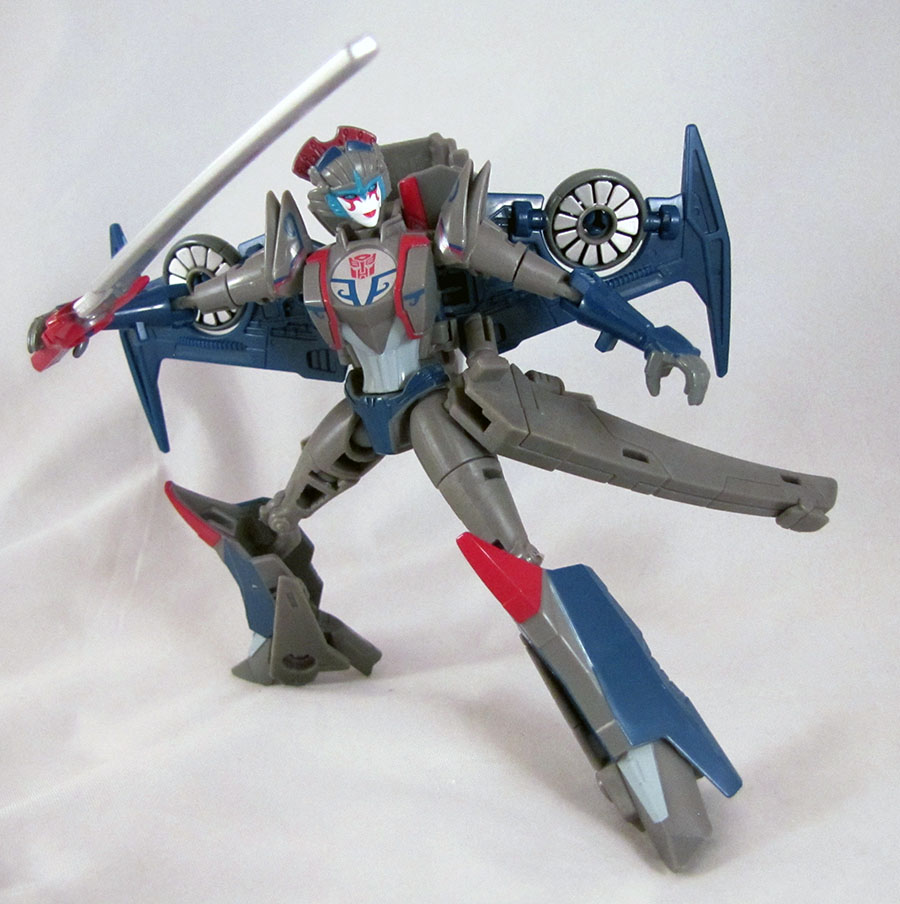 For the second year in a row we got a fancy-colored Windblade as a San Diego Comic-Con exclusive!  Last year, we got a red and goldish Windblade in a "Combiner Hunters" giftset, and this year we get a new Windblade in a "Titan Force" giftset!  ... and I do mean "new."  There's a new Windblade toy that's based on the Robots in Disguise cartoon design, and this is the actual-factual first way to get it.  The domestic retail one's yet to hit stores, and the Japanese version of the same thing is either arriving shortly before or after it.  So this San Diego Windblade is a new toy!

Sort of, I guess?

I mean, it's still Windblade, and a Windblade design that's not too far removed from the first Windblade toy.  This new RID Windblade transforms..... very similarly to the first one.  Nosecone flips on the back, legs fold out from the thrusters, arms just kinda unpeg from the underside of the jet.  Like, it's all the same stuff, but everything is kinda simplified.  It's a toy that's the same size and the same general design, but with fewer details.  There's fewer parts, and it's streamlined a little. 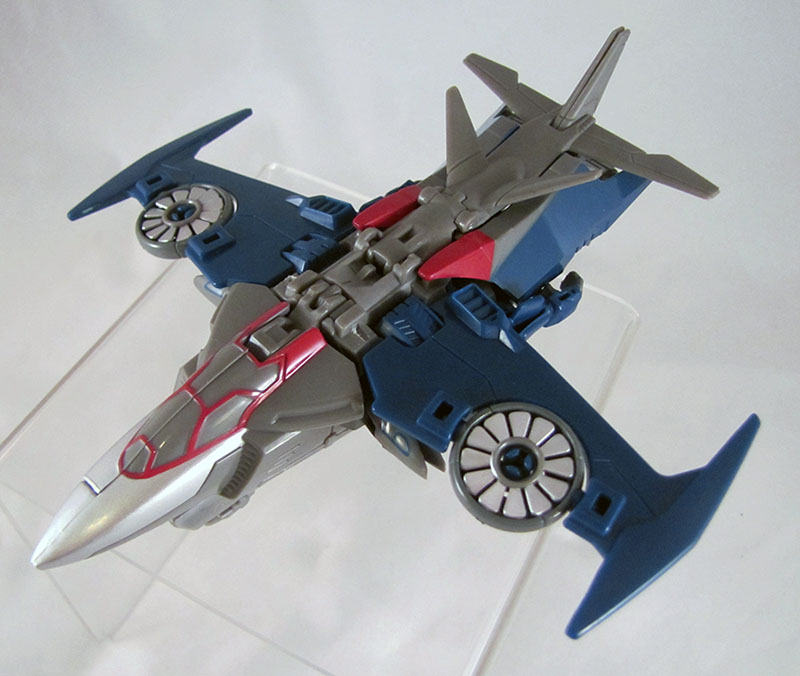 New Windblade even comes with a sword and sheath that are nigh-identical to the original.  One might be forgiven for assuming they're exactly the same tooling, but they're not.  The 5mm peg is moved to a new location and the whole sheath thing is skinnier now.  Like, it's as if they took the same 3d model and squished it a bit and moved a peg.

The fan still removes from the back of her head, and the turbines on her wings still rotate.  As such, she retains most of the original toy's functionality, it's just, again, everything's a lot simpler.  And she stands better, too, with new feet that aren't so fiddly. 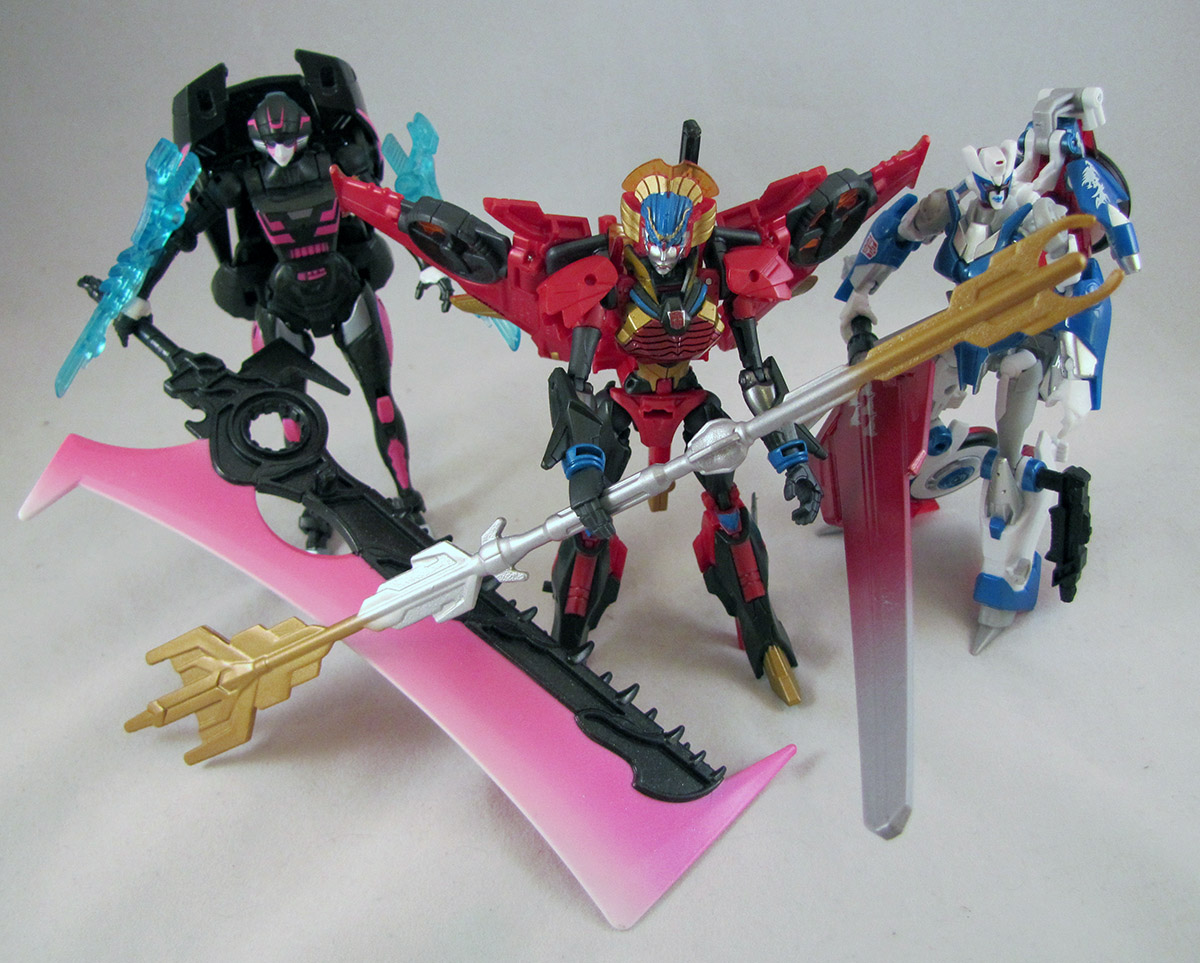 Here's the SDCC-exclusive Combiner Hunters three-pack, which I'll showcase 'cuz the remainder of the stock goes up some time today on HasbroToyShop.com.  (OH HEY!  HERE IT IS!) It comes with redecoes of the three Deluxe Class female Transformers we got last year: Arcee, Windblade, and Chromia, plus a bunch of additional huge-ass weapons and one small bit of retooling.

The retooling is Arcee's hands, which go from slot-holding hands to the usual 5mm peghole hands.  She still comes with her swords, and since the slots are 5mm across, she can still hold her swords.  She doesn't come with either of her original guns, which means technically you can't really complete her transformation.  Her hands grasp either end of her smaller rifle in car mode, and without that rifle, the arms kind of just fold underneath and don't secure.  I mean, it's not the worst thing in the world, and it's not like they're visible in car mode, but it still bothers me a little.  She comes with a giant toothed cleaver that originally came with the super-large Beast Hunters Optimus Prime toy from a year or so back.   She doesn't hold the cleaver super well, what with it being twice her size, but you can still get her into some poses, and a huge-ass cleaver is still fuckin' rad.  Her new colors, a dark charcoal with some pink and silver trim, make her the most attractive toy of the set.  Plus, you know, Autobot symbol tattoo on her cheek.  Booyah. 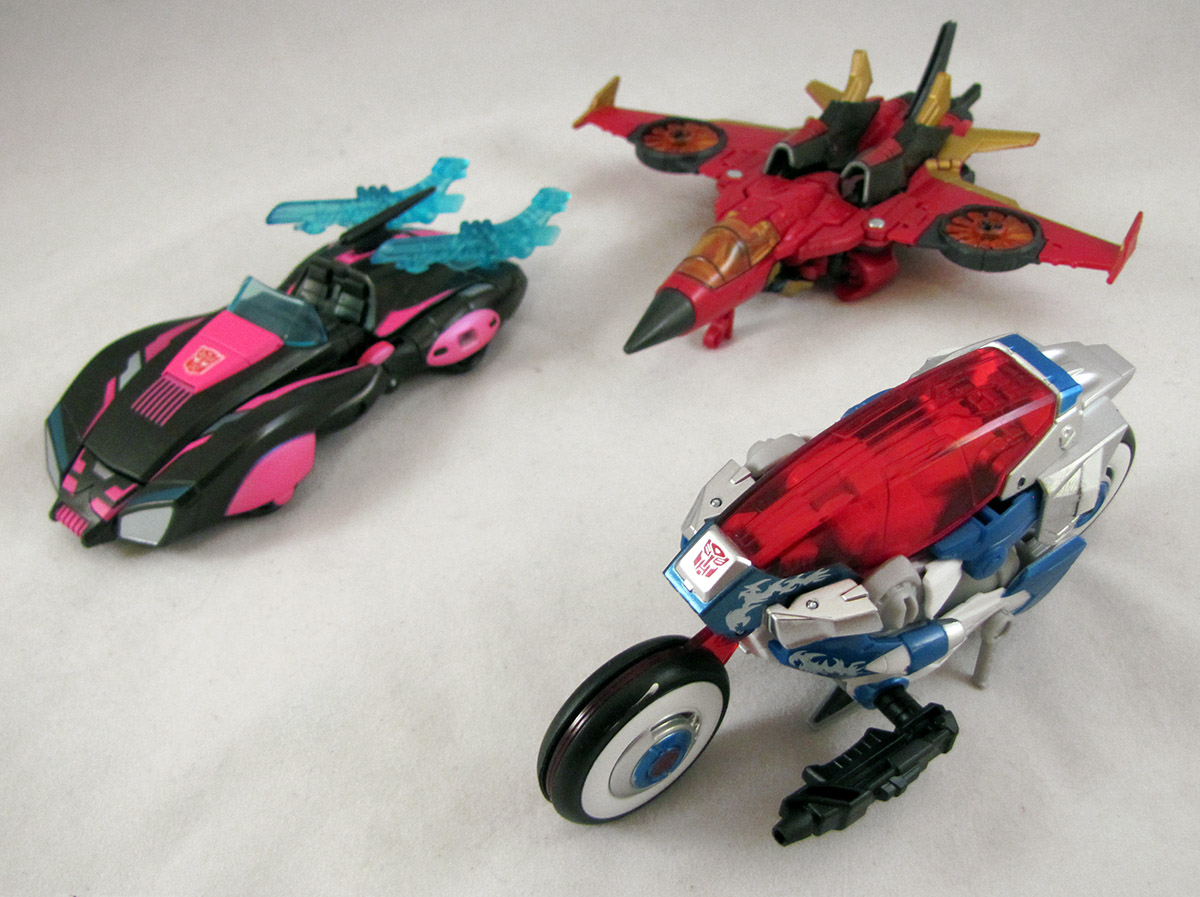 Windblade and Chromia have fewer changes to them, with no weapon absences or retooling, and their colors kind of feel a little more shuffled-around rather than changed.  Chromia is improved, I think, with the facepaint around her eyes, which makes her look pretty fierce and a little terrifying.  Which fits Chromia well, hmm?  She's still blue and gray, though now she's more gray than blue, while Windblade is now mostly red rather than only a little red.  They both come with weapons from those 12-inch "Titan Heroes" figures that collectors hate but kids snatch up like crack.  You know, the nontransformable five points of articulation guys?  Windblade's weapon is the "Decepticon Hunter" from the Robots in Disguise cartoon, while Chromia's sword is Bumblebee's sword version of the Decepticon Hunter from the same cartoon.  But, you know, packed with a Deluxe Class toy, they're huge.

A purchase of either this Combiner Hunters set or the SDCC-exclusive Devastator at Comic-Con got you a bonus Combiner Hunters one-shot comic.  That comic's being released to comic book stores on Wednesdays!  I read that comic like thirty times at my booth, and so I'm very glad it was a good comic.  (It introduces Victorion, the fan-voted lady combiner.)

If you like transforming robot ladies in facepaint and tattoos wielding weapons larger than themselves which they use to cut down giant Transformer combiners, then this set is probably up your alley. 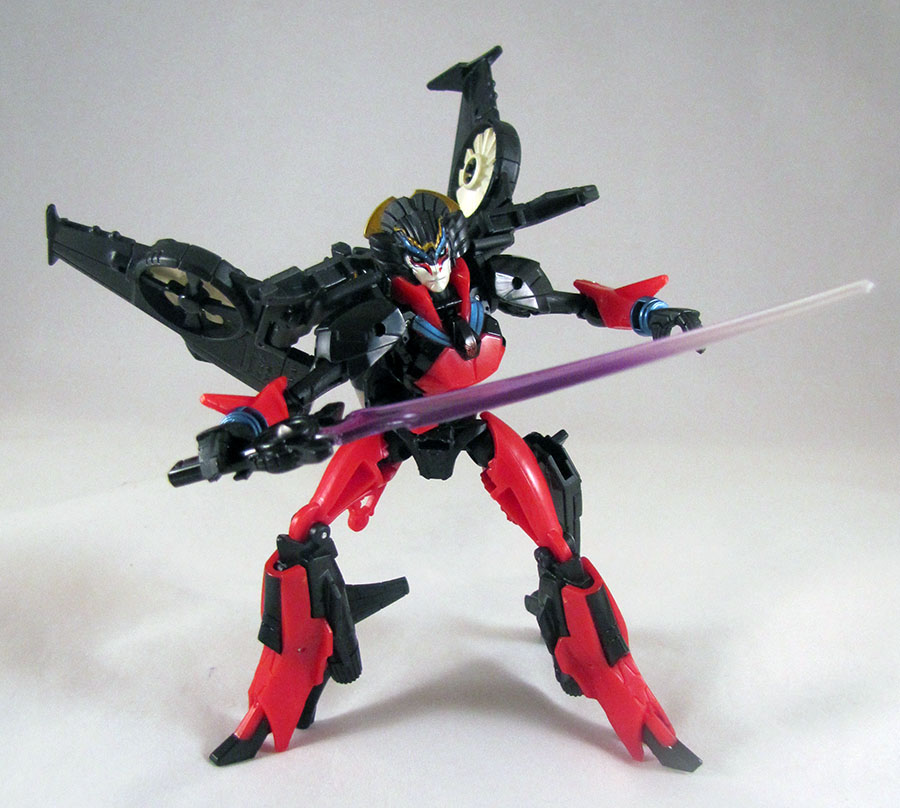 Yay, Windblade is here!  I've been needing her toy in my life for some time -- though admittedly, it's not because of her toy specifically, but who her character is and what she represents.  Many of her attributes were chosen through fandom voting, such as her red and black color scheme, her altmode, her weapon, and, of course, her gender.  It's the winning gender option that set a lot of weirdos off, which, as my comic strip had noted previously, it's not like anyone was mad that "male" was an option.  But "female" won, and so here we are.  Viva democracy!

Her character is also important to me.  So often Transformers characters are defined by how badass or snarky they are, but Windblade's strength is in her empathy.  Optimus Prime may often make speeches about how peace and harmony are important while simultaneously beating someone's face in, but Windblade's compassion is presented as an actual important skillset.  Sure, she's good enough with a sword (and getting better with training), but the care in which she interacts with other people wins her more battles.  She easily could have been another aloof loner rebel warrior whatzit, but no. 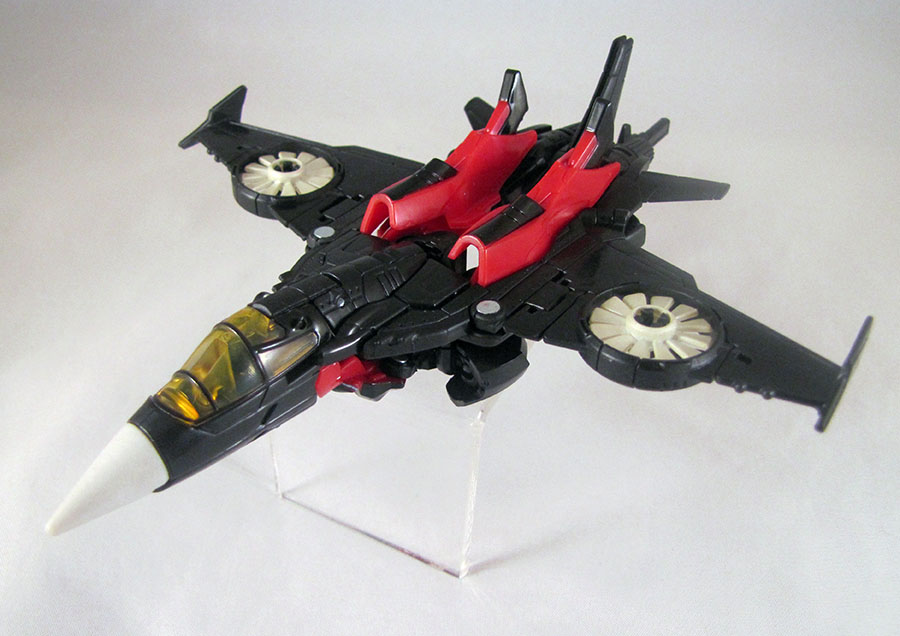 And so Windblade's toy, the result of a Thirtieth Anniversary Hasbro website poll, has had some equal care taken with it.  In a world of increasingly budget-strained decisions in the action figure industry, Windblade is obviously a case of some extra mile being taken.  In addition to the base figure, which transforms from a robot to a VTOL jet, she also comes with her sword, the blade of which fades from translucent purple into translucent clear.  The sword stows in a scabbard which can be held or pegged in numerous ways -- there's a 5mm port on one end, a grip for her hand on the other, and a notch that can lock into a slot on either of her hips.  The fan can be removed from behind her head and be held in her hand as a weapon.  Her VTOL jets can be rotated forward, plus they spin.  As with recent Transformers toys, there's a plughole under her nosecone (which relocates to her robot mode back) that is compatible with some action figure stands. 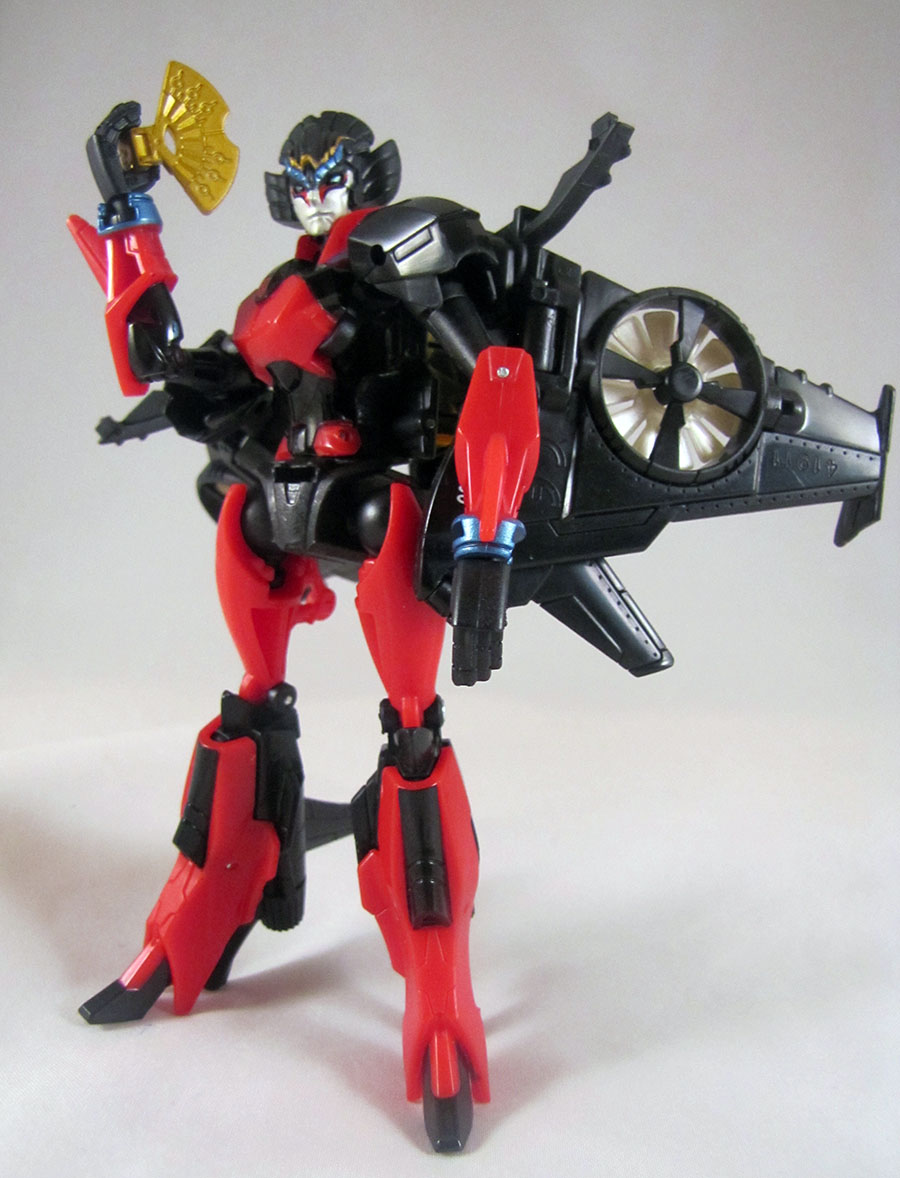 There are a few negatives -- for example, she's not easy to stand.  Due to her wings, she's a little backheavy, and so her tiny footprint is sometimes not sufficient, and the way her heels like to easily fold back up into her legs doesn't help either.  She can be stood if you're patient, but you can't just plop her down on a desk when you're done swooshing her around.

Her jet mode also has a few holes in it.  The top of the jet is obviously a pair of shins, and there's an open gap between these two parts that looks kinda bad.  And because the toy had so much work put into it, she's a little fiddly.  She's got a lot of joints and hinges packed into her.  Things plug in fairly well in both modes, but there may be some times that stuff moves when you're trying to move other stuff.

Windblade hasn't really hit North American retail yet (I got mine from Big Bad Toy Store), but when she does, I think she's worth taking a look at.  She's important for many reasons and her toy does some neat stuff.