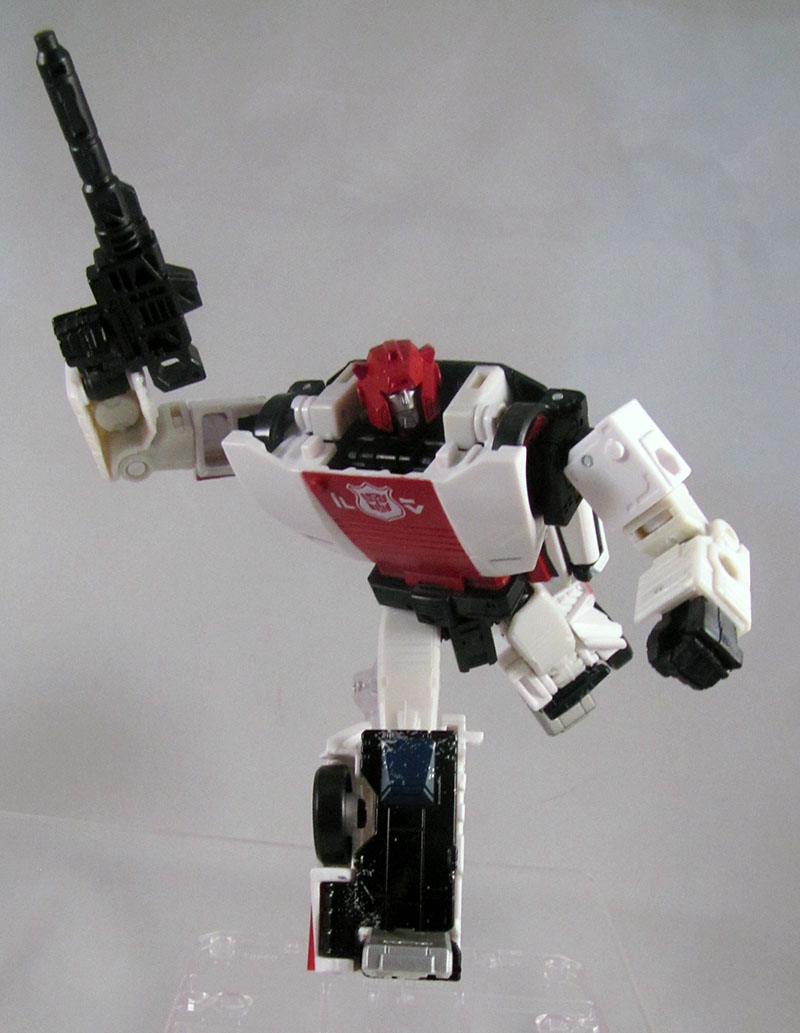 I think I've definitely fallen out of love with the Universe (2008) Sideswipe/Sunstreaker/RedAlert/Punch/ Counterpunch/G2Breakdown/Breakdown mold.  I guess it doesn't help that a number of those were misassembled, causing the neat little "rotate the roof backpack to cause the head to rise up out of the torso" gimmick to result in an always-off-angled roof backpack.  But mostly, like, yeah, it tried to do so much, and the end result is this tall and gangly guy with funny ears.

I guess that's one of the advantages of so much Transformer stuff being budgeted out after a decade of rising costs.   You really gotta narrow your toys down to the basics.  They get a lot less fiddly!  A little less flying too close to the sun, y'know?  Brass effin' tacks.

Anyway, I've already reluctantly sung Stege Sideswipe's praises.  Reluctantly mostly because, really?  I'm not that attached to Sideswipe-the-character.  The most interesting thing he's ever done is die, whether it's Pat Lee making it up that he died in the movie, or actually dying in the IDW comic that one time. 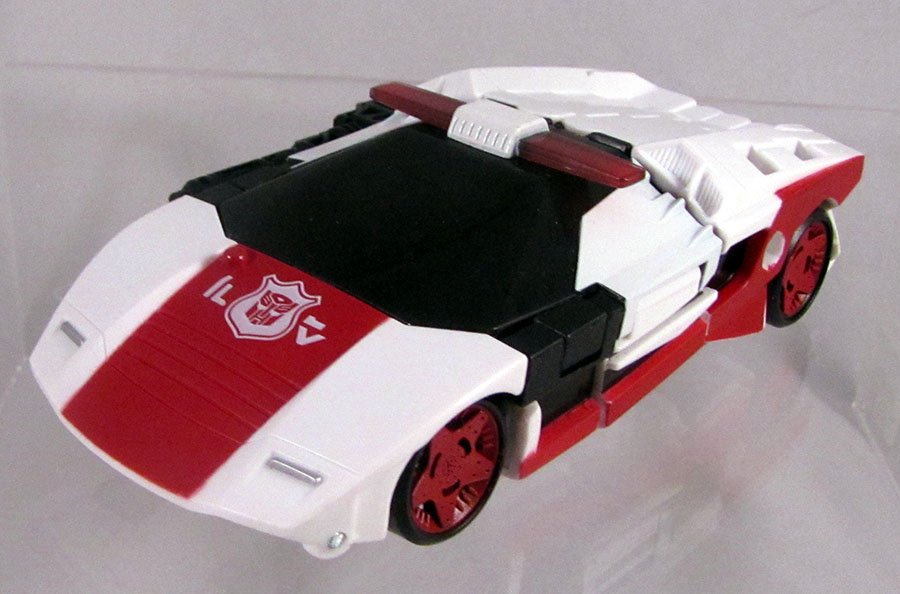 But Stege Red Alert!  I like him.  He has a personality.  He's a paranoid, anxious mess.  And who among us on Today's Internet can't relate to that?  So I've been keeping a keener eye on replacing Universe Red Alert, more than Universe Sideswipe, with Stege Red Alert.

Red Alert is what you'd expect from a Red Alert.  He's Sideswipe, but in white/red/black Fire Chief deco!  He's got his red helmet from the cartoon, which is nice, because non-black helmets are interesting.  Most of his white plastic is stark white, but his arms and thighs are this off-white color.  He's not an Earth vehicle, and so the "F D" that's typically on his chest has been swapped out for the Cybertronian letters for "F" and "D." 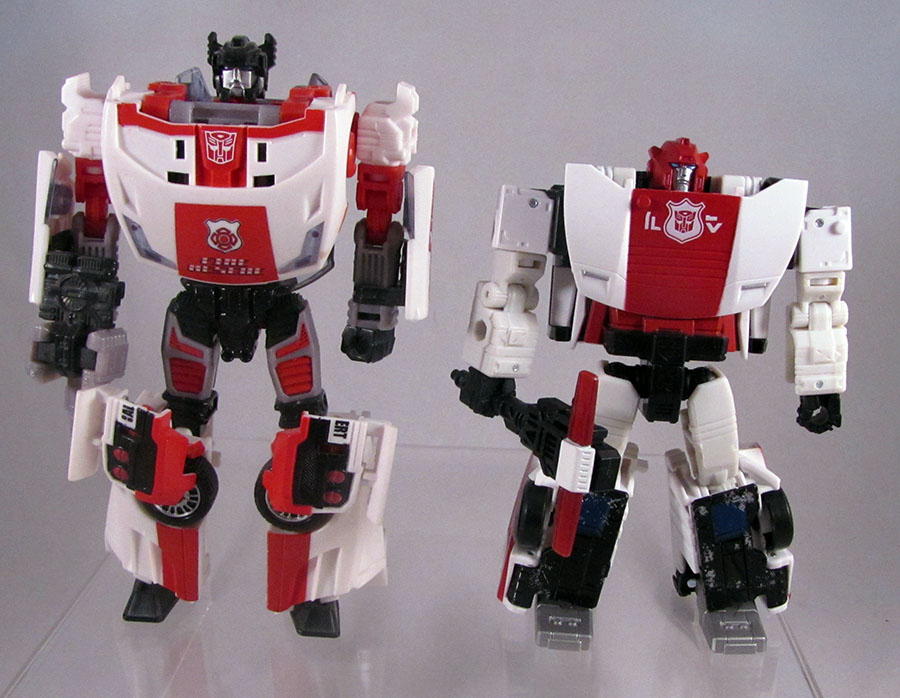 The one thing I don't like is that he doesn't come with the same shoulder missile launcher weapon thingy that Sideswipe does.  They both had that!  The should both have that.  Instead, Red Alert comes with a rifle, which you can also attach his flasher lights to and have him hold the whole contraption as an axe.  Maybe something presumably made out of glass isn't something you should be swinging around at metal people, but whatever.

man, transformers used to have a lot more deco, didn't they

I'd meant to gab on about Generations Red Alert back on Monday night along with that week's Toy News International strip, but the Mike statues done shown up on my porch and Red got knocked back.

(Only a handful of Mike statues remain!)

As the TNI strip mentions, there's a lotta versions of this mold right now.  I own five, but there are about four more between Japanese versions of three of these guys and an additional (super super rare) G2 version of Sideswipe.  It's not the greatest mold, but it isn't terrible.  How is it that the toys that get redecoed the most are the ones that are actually pretty mediocre?  The original Seeker mold, the Classics Seeker mold, Dinobot... (SHUT UP SHUT UP DINOBOT IS AWESOME)

As I've mentioned previously, no matter how terrible the toy, the more versions of one toy I accumulate, the more desirable extra versions become.  It's absolutely nuts.   Maybe it's like mob mentality, how people get dumber in groups.  Well, these large groups make me dumber!

Red Alert himself isn't a bad version of the mold.  If I had to rank him by prettiness compared to the others, he'd probably rank a distant second after Breakdown.  Breakdown's color scheme has no equal, so that's just not terribly fair, but them's the breaks, Red.  The way the white and gray and sharp red play off each other is striking, just enough to edge him out over his primary color brothers.

As for the tooling itself, he's probably second-to-worst, just ahead of Tiny Head McGee, aka Mr. Punch/Counterpunch.  Why?  Well, because of the light bar on the roof, you can't mount his engine thingy on his back in robot mode anymore.  In addition, the holes on his shoulders are no longer large enough for him to peg his weapon into.  So Red Alert's forced into having to wrap the engine thingy around the gun and peg the whole thing into his wrist... which is an incredibly unstable arrangement even before we realize that this larger gun configuration conflicts with his forearm kibble.