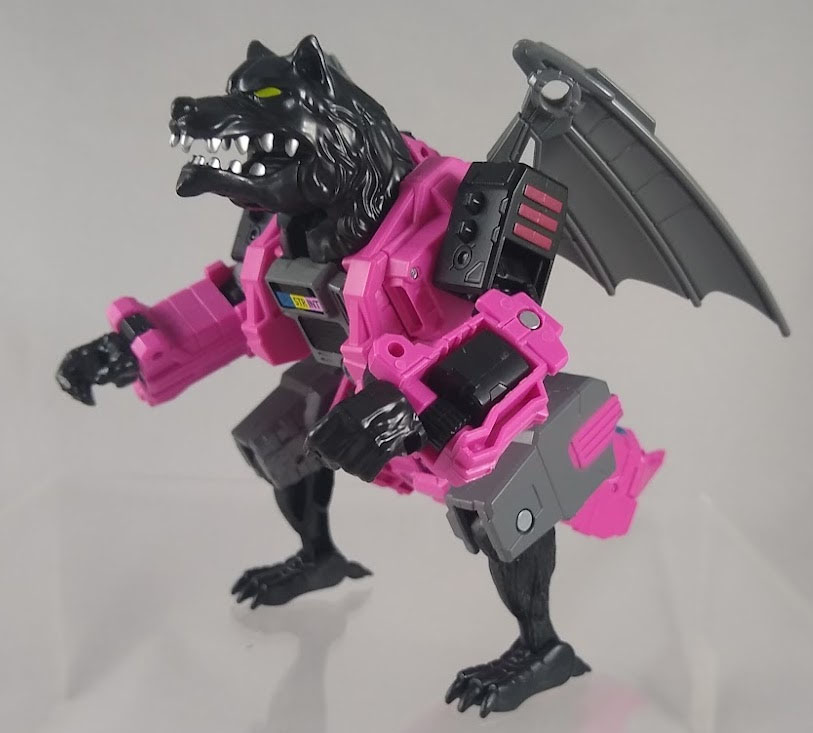 I got the original Fangry on my... ninth birthday, I think?  He was a 1988 guy, and I was nine in 1988, so minus some potential timeline complications, that's probably accurate.  He was a gift from a friend at my birthday party at Aladdin's Castle, which is an arcade, which is a place you play upright video games for quarters, for you young people.  (kidding, i know you know what arcades are)  I had no idea Fangry existed at the time -- he was completely new to me -- and since I was a literal child, I remember thinking, who the heck is this weirdo, why isn't he Hardhead or Brainstorm or a Headmaster I actually know?
But I'm thankful I got him, because 1) Fangry is rad.  There is no 2).  Just 1).  That's all we need.  He's a pissy winged dragon wolf who violently reacts to being given orders and, wow, actually got some play in the Marvel Comics I read slightly later as a child.  In 1988 terms, he was important!
Titans Return gave us a tiny Head Only Fangry that sort of plugged into a tiny winged wolf that also became a dragon, but no Normal Sized Proper Fangry.  So I made my own!  I got a second Titans Return Grotusque, who was 90% the way to Fangry already.  He was a purple winged gopher instead of a purple winged wolf.  All he needed was a bit more purple, some wolf ears to fudge the animal head closer to wolf, and the existing Titans Return Fangry head.  A pretty simple and effective Fangry custom!  I was proud of it. 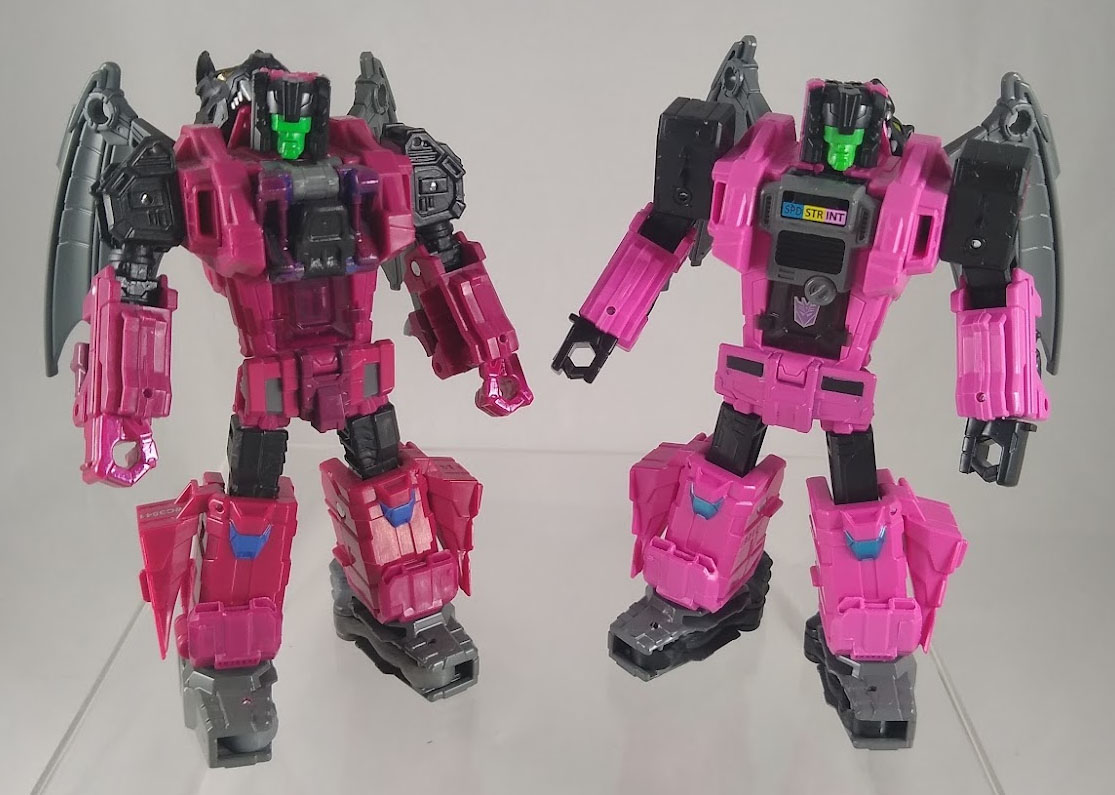 And I'm even prouder now that Hasbro's done the exact same thing.  Okay, they did some retooling, because they can, but it's effectively the same thing I did.  Because I'm smart!  Kingdom Fangry is a slightly pinker Titans Returns Grotusque, using the same TR Fangry head, a new wolf head, new shoulders, some new wolf hands (instead of the three claws), and a new chest and crotchplate.  But yeah, glad to see both Hasbro and I were super geniuses.  Watch me preen.
Fangry is part of a $85 Target-exclusive "Worlds Collide" four-pack that, so far, has shown up in like five Targets.  That was a month ago.  No hint of them in Columbus yet.  But I found my unicorn on eBay, a person selling the four-pack minus the Bumblebee, who's the only guy I have no use for.  (I didn't want to pay double for the whole set to some scalper if I could help it.)  So I now have my Fangry, who's essentially the completed version of my Proof Of Concept. 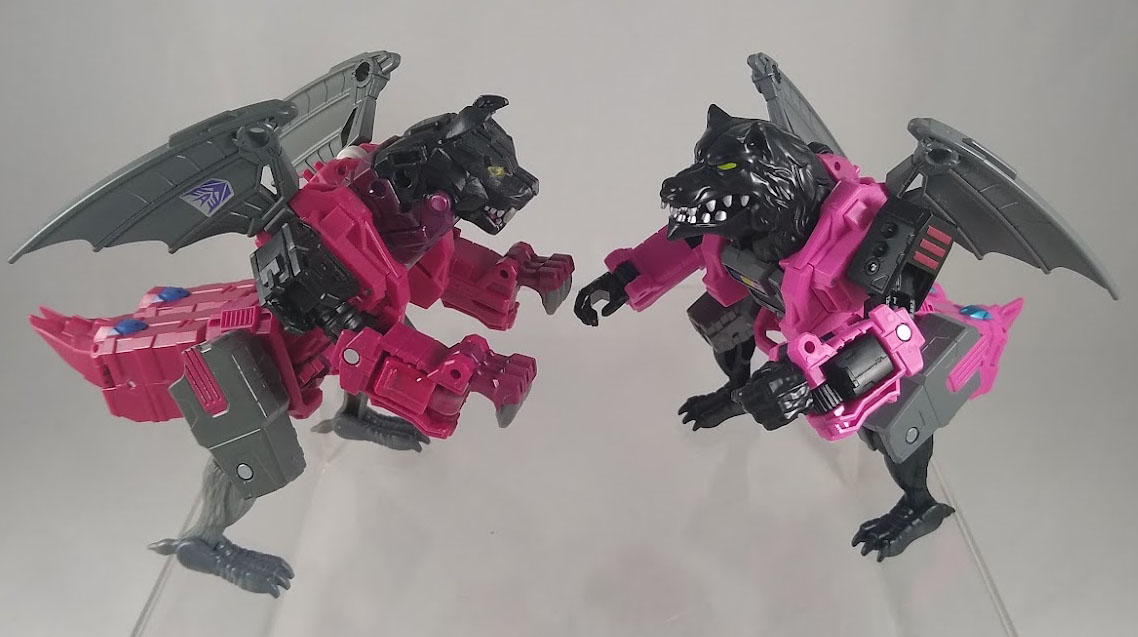 I love the new wolf head, which is based directly on the original character model, down to its toothy expression.  The jaw is hinged, so you can close that mouth up, if you want.  Grotusque's beast mode head transformed the jaw out of the chest, but Fangry has the entire head and jaw as a separate apparatus, while the new chest piece merely hangs around down there like window dressing.  Brisko, the name of Fangry's head, has some different plastic layouts and paint choices as well, giving him a more vivid treatment.  (The face itself seems identical.)  The new chest shows Fangry's tech-spec readout, same as the original toy.  And Brisko can hide inside the stomach compartment when Fangry's in wolf mode, same as originally.
The Grotusque mold has seen some better days, though.  Many folks have reported weak knee joints, and mine had a little of that, but nothing I couldn't fix with some brushed-in clear floor polish.  The robot feet chunks have trouble staying on their hinges, also, and I might try using floor polish on those as well. This mold's just been used too much.  Doublecross/Twinferno, the original use of the mold, was also retooled into the other two Monsterbots before we got to Fangry, so this tooling's been around the block a few times.
But it's Fangry, and so I'm pleased.
and i can keep him in beast mode without thinking dang that's a gopher with wolf ears
Tags: fangry, generations, kingdom
View/Post Comments
Triggerhappy every day
Posted November 25, 2016 at 1:01 am 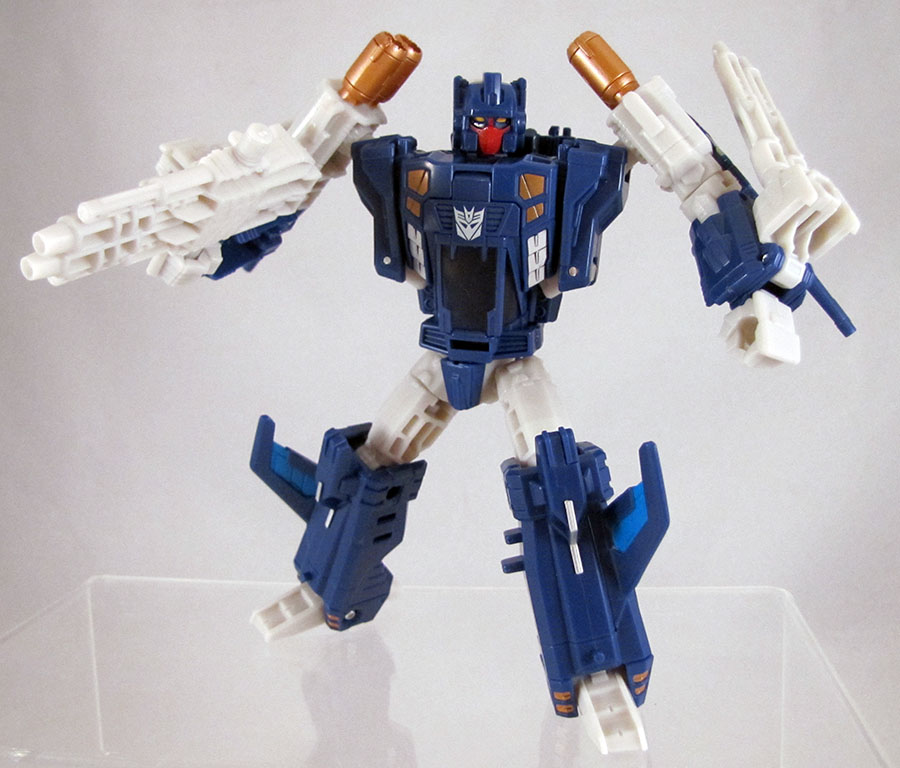 Out of the four Wave 3 Titans Return Deluxe Class guys, I saved the best for last.  Triggerhappy is, like, the Italian finger kiss of Titans Return Deluxes.  I love him so much, you guys.  Whereas Getaway was just a redeco with a new face, Hot Rod was solid but very conventional, and Twinferno was inventive but kind of awkward, Triggerhappy is the whole package.  He is everything.

Let's start with his jet mode.  Spaceship mode?  Sure.  But, like, it just looks cool.  It's got those giant double-barreled cannons and the swept-back tailfins and the sharp angular look... I dunno, it just looks fast and deadly.  It one-ups the original Triggerhappy just by having those tailfins.  They add a lot of important visual flare to both his jet mode and his robot mode legs.

Same as per the others, Triggerhappy's cockpit can open up and his little head dude can sit inside. 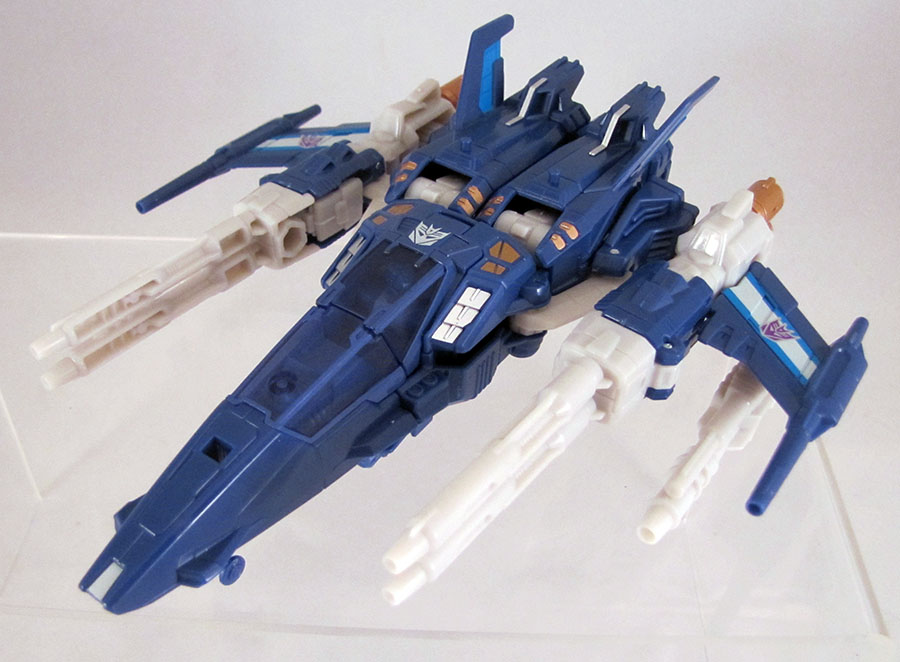 The transformation is complex, efficient, and elegant, all at the same time.  The original Triggerhappy, as mentioned, didn't have those tailfins on his legs before.  The legs previously hid underneath the jet, but now on Triggerhappy's new toy they form the rear half.  The double-barreled cannons double up on his arms.  And the fun part -- the nose of the jet folds down, which is attached to a rotational piece that also the legs and crotch are attached to.  You rotate that whole thing around, switching the placement of the nose and the legs.  This was not part of the original toy's functionality... the jet nose just hung down at his crotch.  But by splitting the cockpit in half and rotating the rest behind the toy, you get a much nicer looking torso.  Plus it moves the legs from behind the jet to just below the back half of the cockpit to complete the torso.  I dunno, it's great, I love it.  It's fun to do. 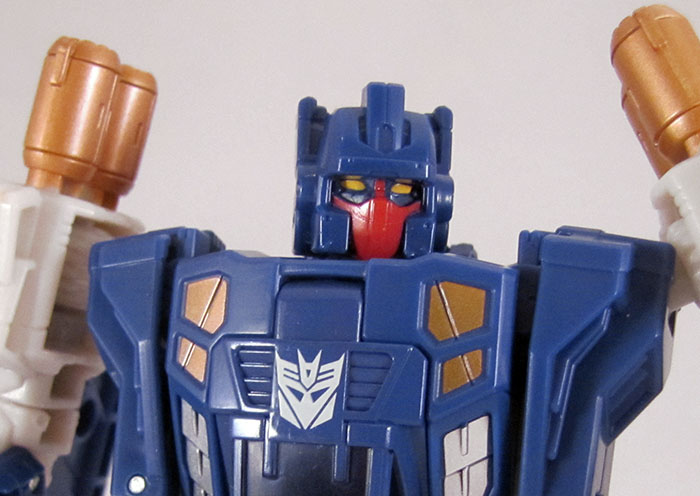 And it results in such a nice robot mode.  He's got those new tailfins on his legs, he's got that abbreviated cockpit window on his chest, and the shoulders are moved up into place on a series of struts that bulk up his look in just the right way.  If you want, you could fold his fists back into his forearms and untransform his double-barreled cannons into their place, giving him giant gun arms.

I'm also pleased with the amount of paint.  There's no large areas that are covered with paint; instead, there's lots of tiny little areas given silver and gold highlight.  Lots of little things that you would have been expected to be left plain are given little paint details, whether it's the very middle tip of his jet nose or the tiny bits of gold on his ankles.  Unlike the sparse-looking Getaway, Triggerhappy looks very complete.

I'm gushing, I know, but there's not much to complain about here, and everything is executed so well.  I heart him.

So, woo.  Pretty sweet.  This may be the first t-shirt ever with ... any of these guys.