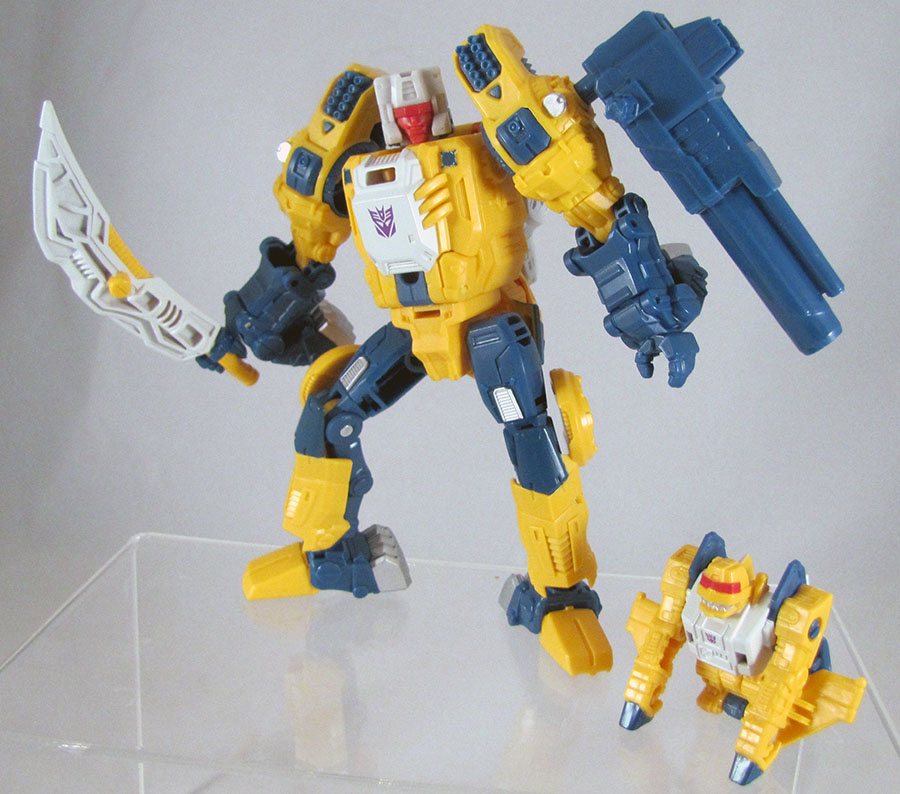 Weirdwolf is yellow and teal, and this is like 99.99% of why I like him so much.  That plus the offwhite and red trim to me is the Italian finger kiss of color schemes.  It's the same reason I love RID Destructicon Bludgeon.  It's why BotCon 2007's Weirdwolf redeco of Cybertron Snarl is one of my all-time favorite convention toys.  I love those colors.  They're great.  A++  Would buy again.

I decided to get the TakaraTomy version of Weirdwolf for a handful of reasons.  One, he comes with a yellow and teal monkey, which is hard to say no to.  Rarigo (which is "gorilla" spelled backwards in Japanese) is a redeco of Apeface's Titan Master vehicle, which triplechanges from gorilla to jet to gun and back.  If I can get a Weirdwolf that also comes with a monkey, why wouldn't I get the one that comes with a monkey? 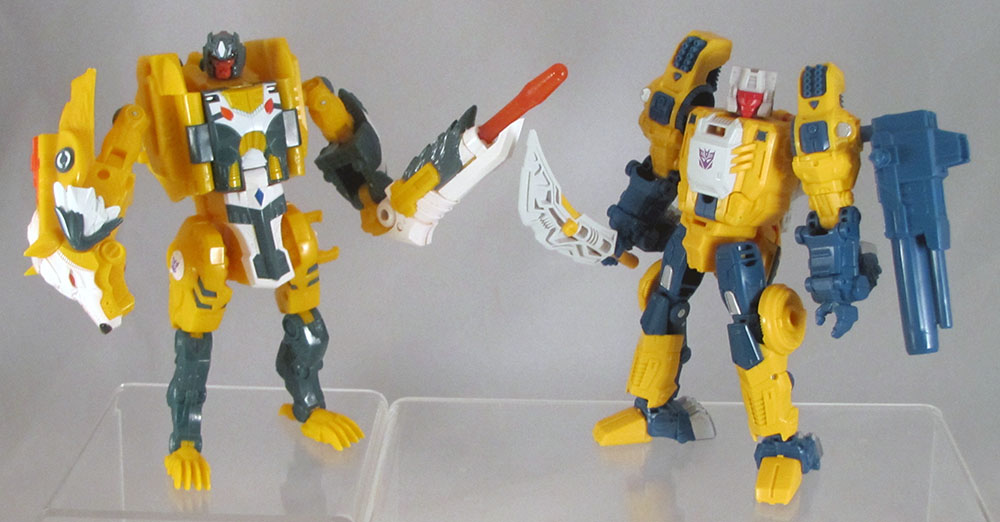 Secondly, judging from online photography, TakaraTomy's Weirdwolf had a teal I liked better than Hasbro's.  Mind, this is going off of promo renders and colors-not-always-true-to-in-person photography, but I did my best to judge the two teals, and I decided on the Japanese one instead of the domestic.  I am very particular about my teals!  The BotCon Weirdwolf's teal is a smudge too green, and it's not SO green that it ruins the yellow-and-teal deal for me, but it's on the edge.  TakaraTomy Weirdwolf looked just right.

Plus their Monzo got his face painted, which is a plus.

Things I'm missing by not having the Hasbro one, are the nice translucent red highlights inside the wolf head.  Takara paints over a lot of that with light gray.    On the other hand, I really like the two-toned red of the eyes and face.  The face is a tad pinker than the eyes, and it's a nice, subtle effect.

The toy is pretty adept for your run-of-the-mill quadruped-to-biped transformation.  The arms transform into forelimbs and the legs transform into hindlimbs, as often the case with beastformers.  But it's a much better four-legged mammal than Alpha Trion's unikitty mode, with hind legs that look a lot more natural, and so I'm pleased.  The torso expands for beast mode and collapses to a shorter length for robot mode.  The wolf head rotates at the neck, and also there's a small amount of left-to-right movement as well.  The jaw opens, which is usually a feature on beastformers, but is still always welcome.

Weirdwolf's tail becomes a sword, and there's a cannon weapon that plugs into his beast mode's hindquarters which can also be a seat for a Titan Master head dude.  And, of course, Weirdwolf can point his gorilla gun around if he wants.

I hope the next Transformers line-wide gimmick is Monkey Weapons.

So, woo.  Pretty sweet.  This may be the first t-shirt ever with ... any of these guys.
Tags: merch, t-shirts, silverbolt, fangry, weirdwolf
View/Post Comments
Page 1