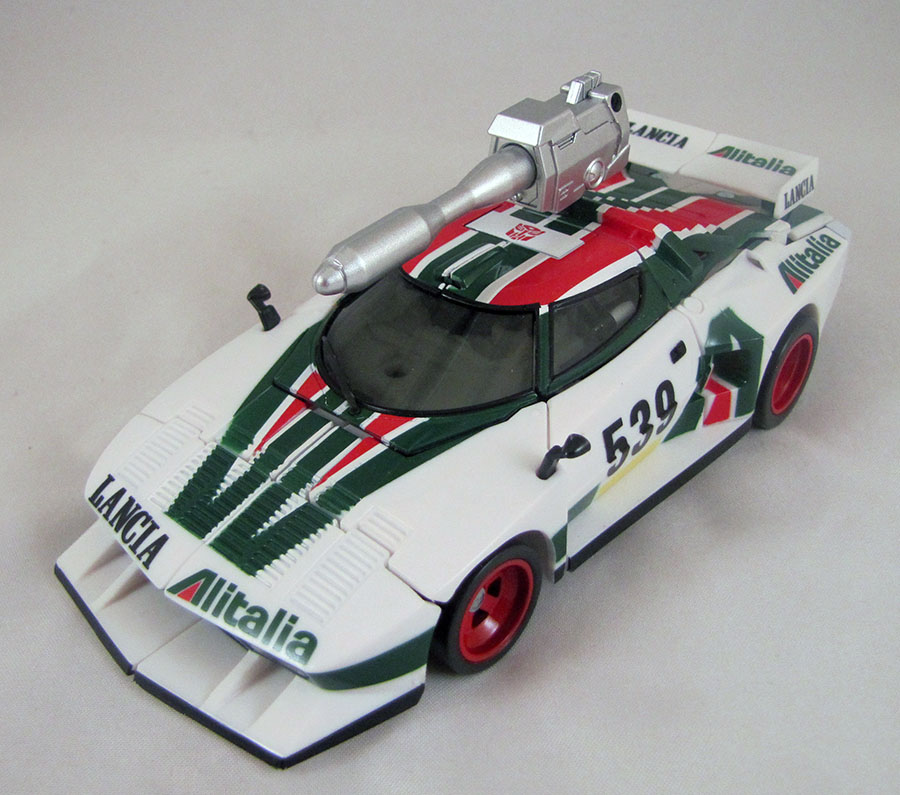 *finally climbs out of a pile of babies*

Look, I have new toys!  New Combiner Wars toys!  I don't have these guys' torso yet, but let's talk about the limbs.  They're wave six of the Deluxe Class guys, aka The Final Wave.  I mean, there's still a buttload of more box sets coming out through the rest of the year, but these are the last single-packed guys before Combiner Wars gets transitioned into Titans Return (aka Everyone Is A Headmaster).

Wheeljack is the most changed of these four.  Though he used to be Breakdown, he's had his entire car mode replaced and most of his robot mode as well.  He's 90% new toy, though he transforms exactly the same and has all the same functionality.  I'm happy for the vehicle mode reshelling the most, because I just kinda feel like Wheeljack needs to look like a Lancia Stratos, moreso than most other Autobot cars need to be their original car model.  I mean, it's cool that he has new robot parts, too, but that feels like extra on top of a necessity. 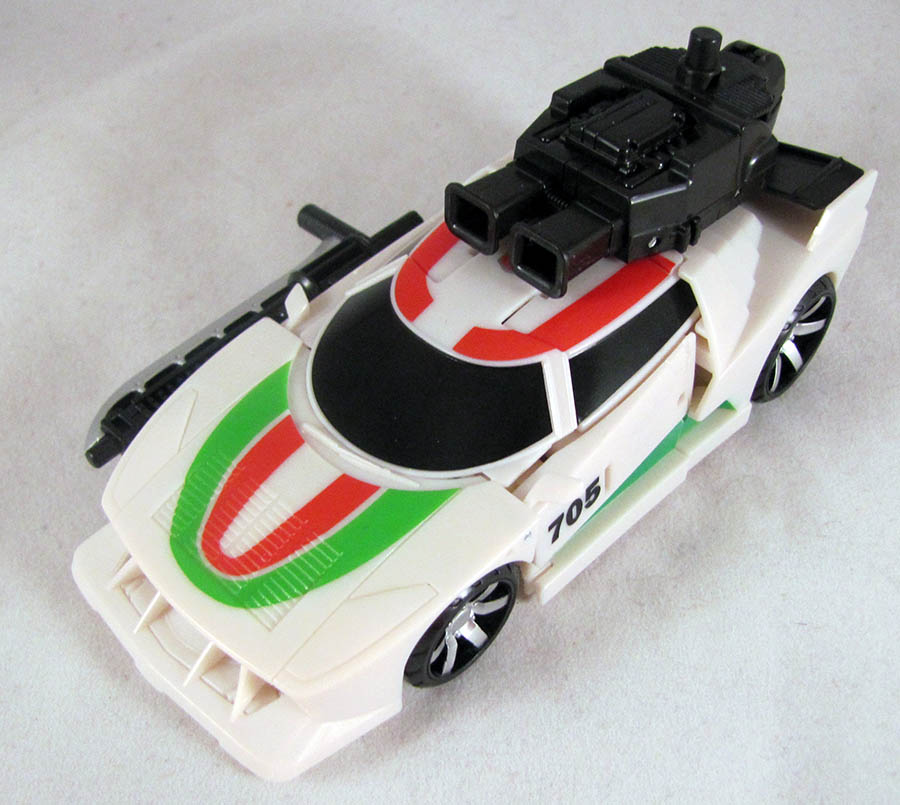 In between promo renders and the final product, some of Wheeljack's black plastic is now white, like his crotch and elbows.  This is not helpful, since he was kinda too-white already!  And so now he's really white.  Don't get me wrong, he has a lot of paint -- Wheeljack kind of has to have a lot of paint, since he's got a distinctive rally deco, but all his budget went into creating that, so you don't get a lot of the small stuff like having painted forearms and whatnot.  S'okay, I'll paint a lot of that stuff myself later. 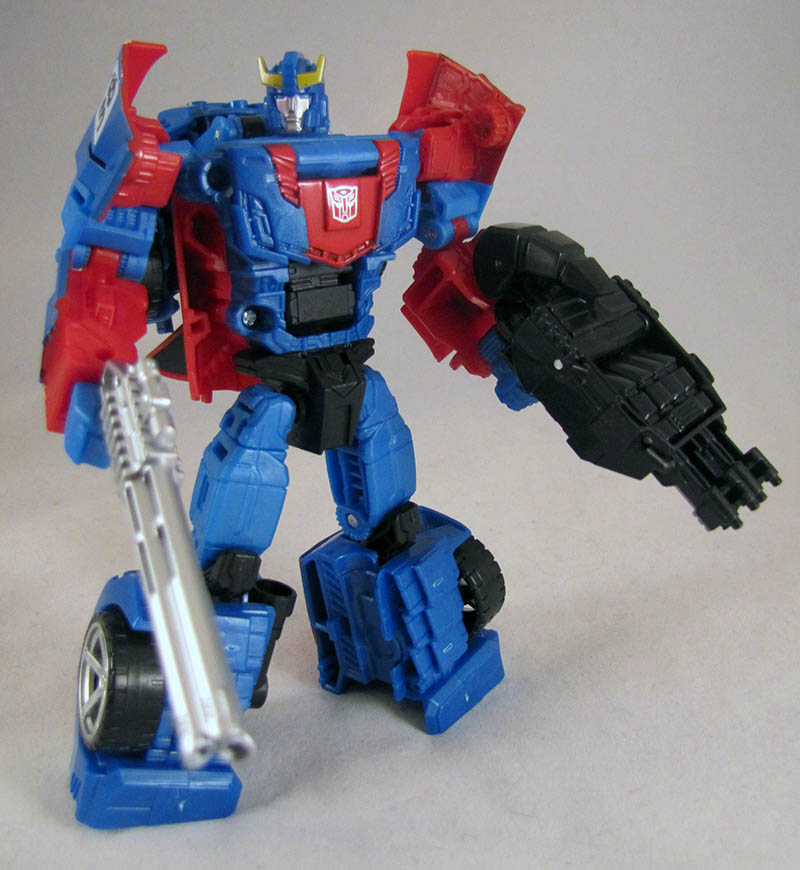 Second, let's just get Smokescreen out of the way.  He's a straight redeco of Prowl.  Like Wheeljack, he uses up all his paint budget in his vehicle mode's rally deco, and so his robot mode's a little plain.  Smokescreen's a little frustrating, because we know there are other unused heads on these guys that might not make it to retail (coughcoughRatchetcoughcough) but I guess Hasbro proooobably wanted a race car instead of a second white-and-red ambulance.  S'okay, Ratchet's likely this year's BotCon customization class guy anyway.

Hound is Swindle with a new Hound head!  Swindle himself was a heavy retool of Rook in the same way that Wheeljack is a retool of Breakdown -- aka, it's all new except for a crotch and a peg and some tiny joints here and there.  In addition to Hound's new head, his smaller weapon now has nubs on the back so that it can be shoved into the rollbar cage on his robot mode back, giving him an over-the-shoulder weapon.  (Some later versions of Swindle reportedly have this as well.)   Over-the-shoulder weapon pleases me! 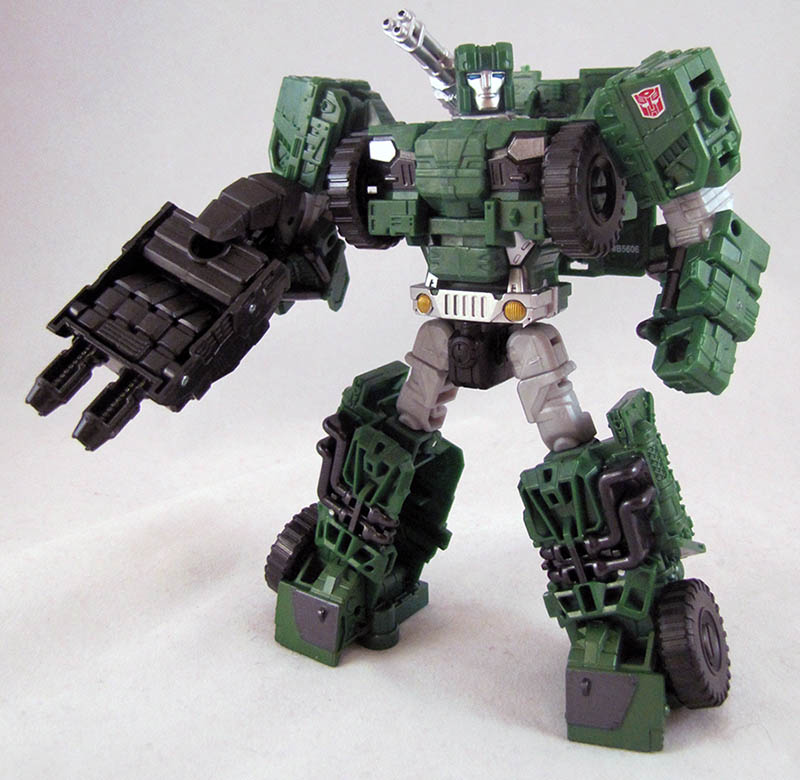 Where Hound is frustrating is how they deco him.  He's got, like, two separate vehicle fronts sculpted on his torso.  Up top on his chest is one set of fake vehicle front, and then there's a separate set of fake vehicle front on his stomach.  This is so he can do double duty as both Hound and Swindle provided you illuminate the right parts with paint.  However, the right parts were not illimunated with paint!  Hound has his Swindle parts painted, ignoring completely the Hound bumper across his ribcage, while those Swindle parts were ignored on Swindle.  Grrrr!   Maybe I'll do some painting on Hound as well.

And finally there's Trailbreaker, who even-more-finally has his own original name back.  Hasbro tried to make so many Trailbreakers over the years, realized they didn't have the trademark but weren't willing to find a new one, and so we got a lot of black Ironhides.  And so finally, a year or two ago they were all FINE, dubbed him "Trailcutter," put out a few Trailcutter toys, and even got Trailbreaker to change his name to Trailcutter in the IDW comics.  And then Trailcutter died.  And now they got "Trailbreaker"-the-Trademark back for real and so I guess they can give his proper name to his corpse. 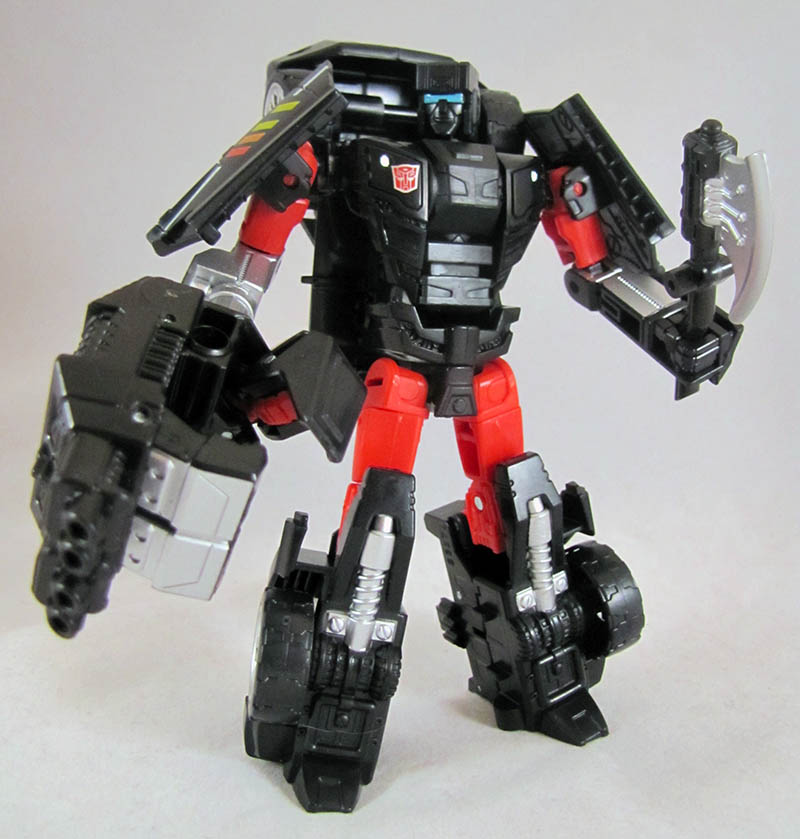 Trailbreaker has a few retoolings, but not nearly as many as Wheeljack.  He's got a new head, obvs, but he's also got new forearms and new fingers on his combiner mode fist.  One of his new forearms ends in a hand and the other ends in a gun, as Trailbreakers do, but they made the end a 5mm peghole so you can shove his combiner mode fist in there.  Sweet.  His combiner mode fist now has kind of a claw thing going on instead of fingers, which is super neat.  Well, it'd be super neater if this tooling got used a second use (as Hoist?) so you could give a combiner robot double claw hands, but whatcha gonna do.  (Other than buy a second Trailbreaker.) 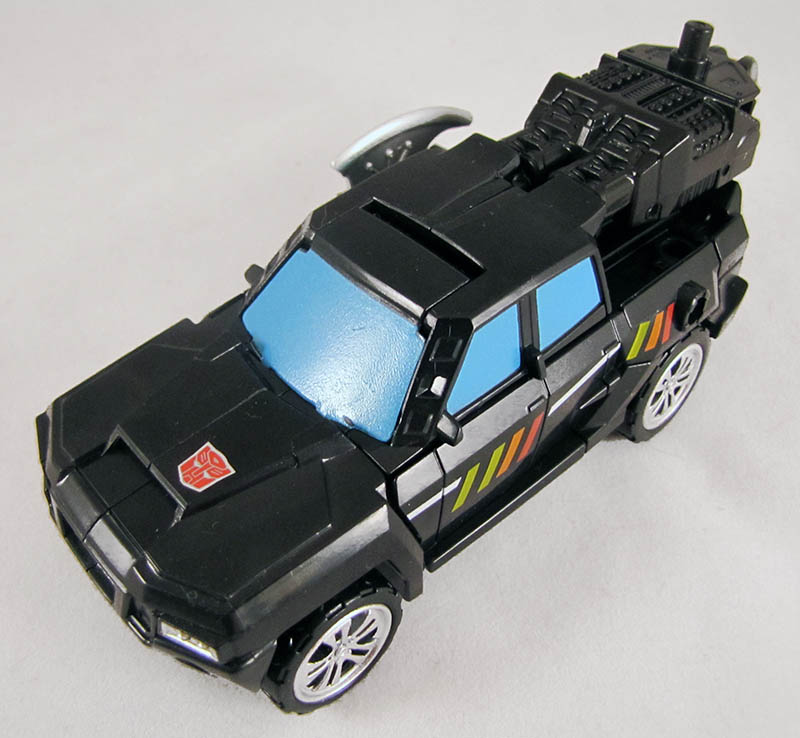 Trailbreaker's new claw things give me pause, though.  The fronts of the claw are painted, which is... weird.  Other than dipping the whole damn thing in silver, like with the Optimus Maximus guys, these hand/foot weapons don't really get paint, and they certainly don't get spot paint.  I have this feeling that the silver finger fronts are meaningful in some way, but I can't find any new way for the weapon to interact with the robot mode.  I mean, obviously, the first thing you think of is Trailbreaker's silver forcefield generator which usually goes over his head, but you can't shove this weapon behind Trailbreaker's head any better than any other version of the mold.  (ie, terribly)  I dunno.  It's gonna bug me.

Hasbro's been trying to make new Trailbreaker toys since like 2002, but losing the trademark to "Trailbreaker" kept on getting in their way, but finally once they bit the bullet and renamed him a year or so ago, we've gotten this flood of him.  And here's the version of him everyone wanted -- "Classics" G1-style Trailbreaker at non-Legends scale!  Of course, his name is "Trailcutter" now.  The comic book he comes packaged with even shows him deciding to rename himself.  (Well, okay, the original comic-book-store version of it did, but the version that comes with the toy excises these exchanges and calls him Trailcutter throughout.)

(The toy version of the comic also removed his alcoholism.)

(Because he's an alcoholic.)

(You see, because his 1984 tech spec said he was inefficient at metabolizing fuel, so...)

Anyway, now that Trailbreaker's out, your roster of 1984 Autobot Cars is complete!   He was the last out the door, much like at the bar every night OHHHHHHHH!  Ha ha ha, gems like that are why I'm a popular webcartoonist.  And once Hoist and Skids come out in the upcoming waves, your 1985 Autobot Cars'll be done, too.

Like Skids (and also like upcoming Legends Class Tailgate and Swerve), Trailbreaker is based on his appearance in the current ongoing More Than Meets The Eye comic book.  His robot mode, anyway!  Also like Skids and Tailgate and Swerve, the toy gives him an Earth-ish style vehicle mode rather than the wacky-looking Cybertronic vehicle he is in the comic proper.  This makes Trailbreaker look less like his comic book robot mode design than he would otherwise, because about 40% of his robot mode is his truck's front end.  But make no mistake, the parts of his robot mode that aren't parts of his truck mode are definitely based on Alex Milne's design.  Check out those Milne-style forearms (larger box connected to a smaller box with a little tab between them)  and the sculpted FOC-style light-stripes Milne put on the thighs.   Also, well, the feet.  The armored-SUV parts are the only non-Milne stuff to be found on him.

The truck bed cover is removed during transformation to robot mode to become either a shield or be attached to his back to give him his usual double-cannoned silhouette.

His transformation hits that sweet spot between simplicity and complexity.  His hood/torso area's multilayered and takes a short while to figure out, but it's not rough to do.  The arms fold underneath as you'd expect and his legs collapse in on themselves.   The only point of real annoyance for me are his shoulders.  Not because they don't functionally work, but because even though the joints are tight enough for his arms to stay in the right place, it's obvious that the grooves which should lock on to the side view mirrors aren't attaching fully.  It's a neuroses thing.

He's the size that Deluxes are now.  On the smaller end of Deluxes Through History, but still clearly a Deluxe.