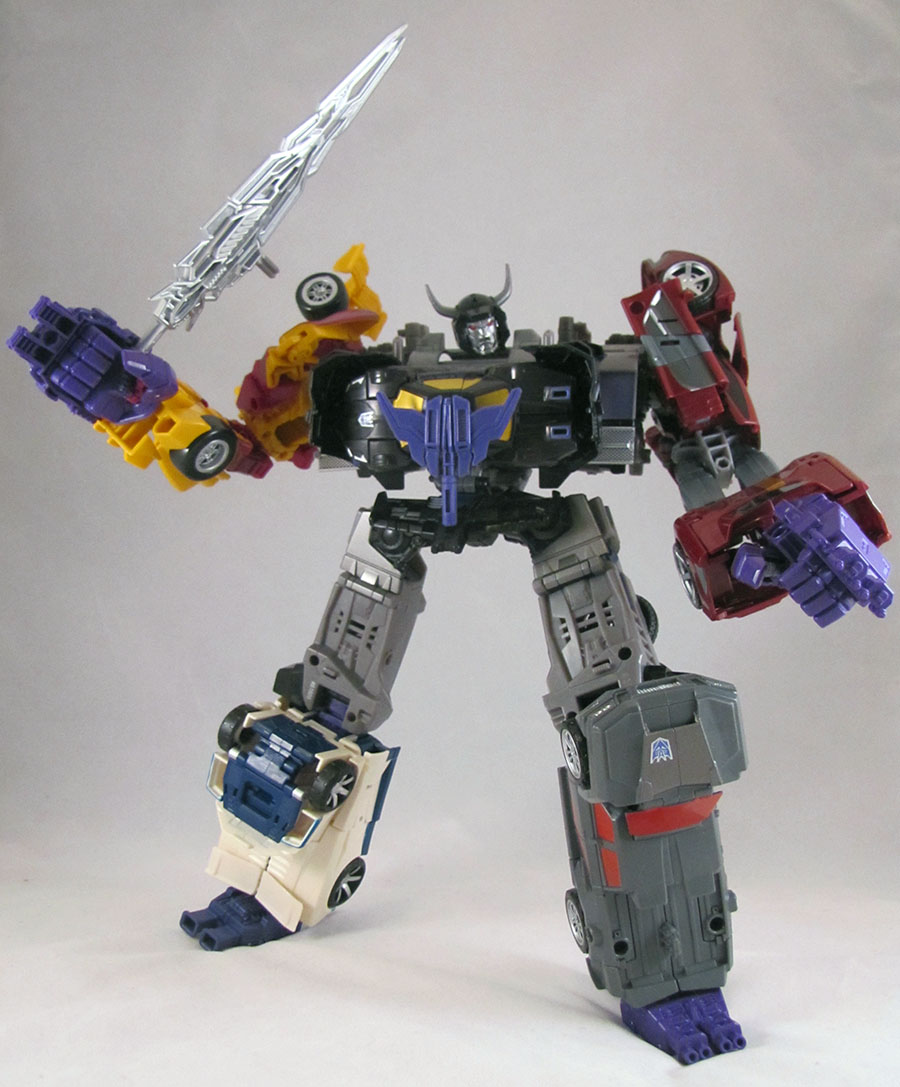 I've had enough of these Combiner Wars guys to make a full combiner since Christmas, but I didn't have the right components to make an official team until Thursday.  And so I figured I'd wait to talk about the combined forms until then, when I could show off a completed group.  The first two waves of Combiner Wars staggered the teams, with one or two missing members of the two completable teams held off until the second wave.  (Optimus Prime being a third wheel.)

Here are the Stunticons!  There are four of the original members here, with two new members of the team.  Wildrider has been replaced by Offroad, partially for "we lost the trademark" reasons and partially for "wouldn't it be nice if one of these guys weren't a sports car" reasons.  You gotta vary up your allotted retail space.  Offroad himself is sculpted to be a new Ruckus, a Triggercon from the late Eighties, but it was determined for one reason or another that his toy would instead become a new guy in colors that would look like Wildrider when in combined mode.  (I think "Ruckus" itself is another lost trademark, but I'm not sure.)

The other new member of the team is Blackjack, who was originally a Micromaster from the Sports Car Patrol, but is now the guy who forms Menasor's chest.  The original Menasor had a little black car-like drone on his chest that came with Motormaster, the semi truck torso guy, and Blackjack is the new approximation of that.  The new Blackjack toy itself, like Offroad, was sculpted to be a different guy, Runabout, the Battlecharger.  But they didn't have the trademark to that guy the last time a Runabout toy was made (he was a Transformers Collectors' Club exclusive renamed Over-Run), so that toy became another small black car, Blackjack.  S'just as well, since I'm not ready to replace my Over-Run yet, and am happy to have a new Blackjack.

(Blackjack doesn't fit super securely on many people's Menasors, but mine is snug enough.)

Wildrider won't be completely forgotten, as he's getting a limited release through online retailers(?) as a Dead End head-retool named Brake-Neck.

Like the Aerialbot limbs, the Stunticons share some engineering ideas.  Offroad transforms the way most Combiner Wars limbs do so far, with the head placed at the far end of the combiner connector piece, the front of the vehicle folding over onto the back of the robot, the arms splitting off from the sides of the vehicle, and the legs pulling out from the rear.  Dead End and Breakdown differ similarly from this formula in that their heads are not attached to the connector piece at all, but are hidden under the hood of the car during vehicle mode, attached to the front of the torso which wraps over the tops of the shoulders and over the connector piece in robot mode.  Drag Strip's head is done similarly, but without the chest wrapping part.

Breakdown is super obviously going to be Sunstreaker eventually.  He looks like Breakdown, sure enough, and there aren't really any compromises on Sunstreaker's behalf, but Breakdown's foot/hand/gun is Sunstreaker's car engine thruster dealio, and it can peg onto Breakdown's back appropriately, as well as slot into Breakdown's car mode in a way that better approximates Sunstreaker's vehicle mode than the usual orientation.  Breakdown will likely get some new parts, like a head and chest, and some new colors and be a pretty good Sunstreaker.

The highlight of these guys, however, is the combination engineering,  The connection points are a dream.  There's no shoving or excessive force, and yet it's incredibly sturdy and poseable.  I'm in awe of its simplicity.  You really can play with the larger combined robot as if it were a single entity, without fear of anything falling off.  (With the exception of Blackjack for some people, as mentioned above.)

This is probably pretty good, since this is a line titled Combiner Wars, so the combining should probably work.

look i only said the comics were stopping 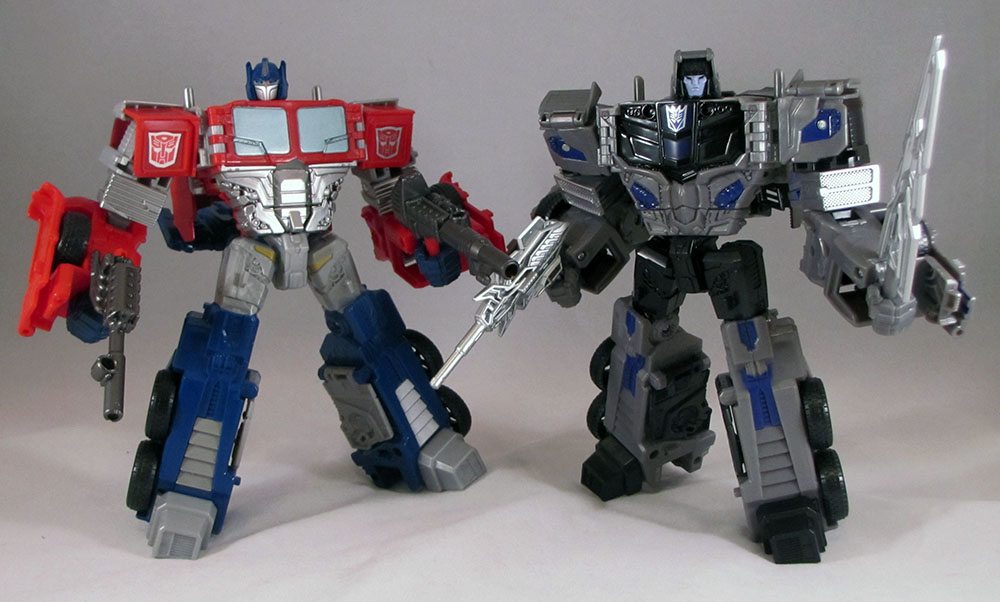 When this new Voyager Class Optimus Prime was first introduced to us, we didn't know he was going to be a super robot's torso in some new subline imprint called Combiner Wars.  And so we were all sort of staring at him, scratching our heads, wondering what was up.  New Optimus was lookin' kinda weird.  Photography of him cleverly obscured the combined-robot crotch hanging off his back, and his limb connection points and super robot head were likewise obscured.  Knowing that certain elements were being compromised to incorporate a torso mode, not to mention existing mostly to be the eingineering groundwork for another toy, made everything fall into place. 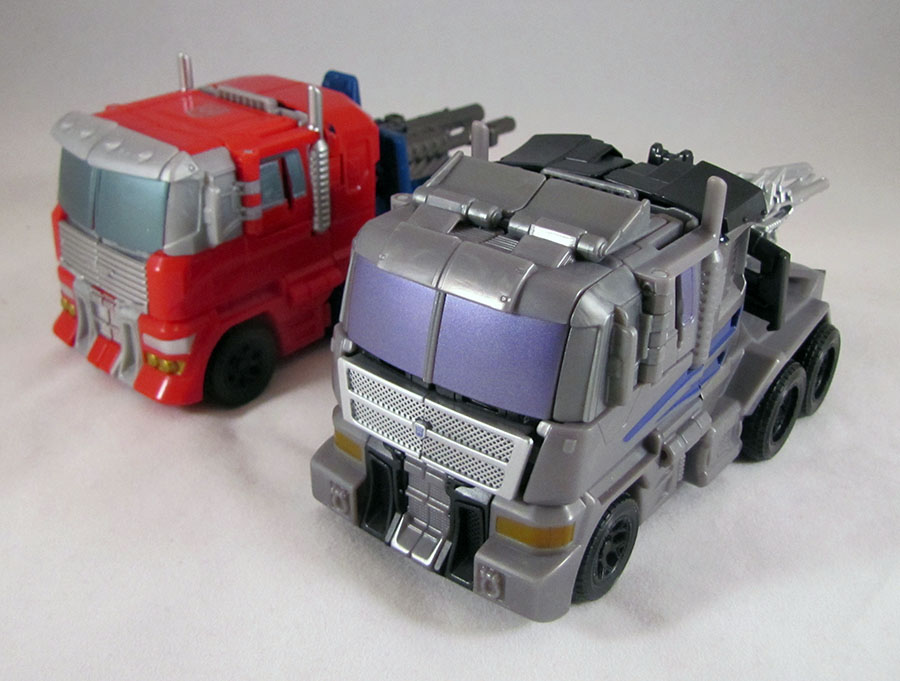 Combiner Wars Motormaster is a pretty damn extensive retool of Combiner Wars Optimus Prime.  They look like they share a bunch of parts, but it's always fewer parts than you think.  Yeah, from the thighs down, they're the same toy, but nearly everything from there up is new.  I'm talking like nothing but the fists, the backs of the biceps, and some structural parts of the torso.  The entire front of the cab on either is different, as are the arms and chest and heads.  Functionally, they are the same toy, but their sculpt differs.

CW Prime is a beefy friggin' Optimus Prime.  He's a little pinheaded, but that's partly due to his transformation -- his neck sits on a rotating panel that obscures his head in truck or torso mode, and there's not a lot of clearance for it otherwise.  The super robot head hides inside his giant backpack.  His chest windows are fake kibble, with the real truck windows placed on the backs of his arms.  His legs transform like basically any Optimus Prime ever.  Motormaster is the same except he gets different sculpted details other than fake chest windows. 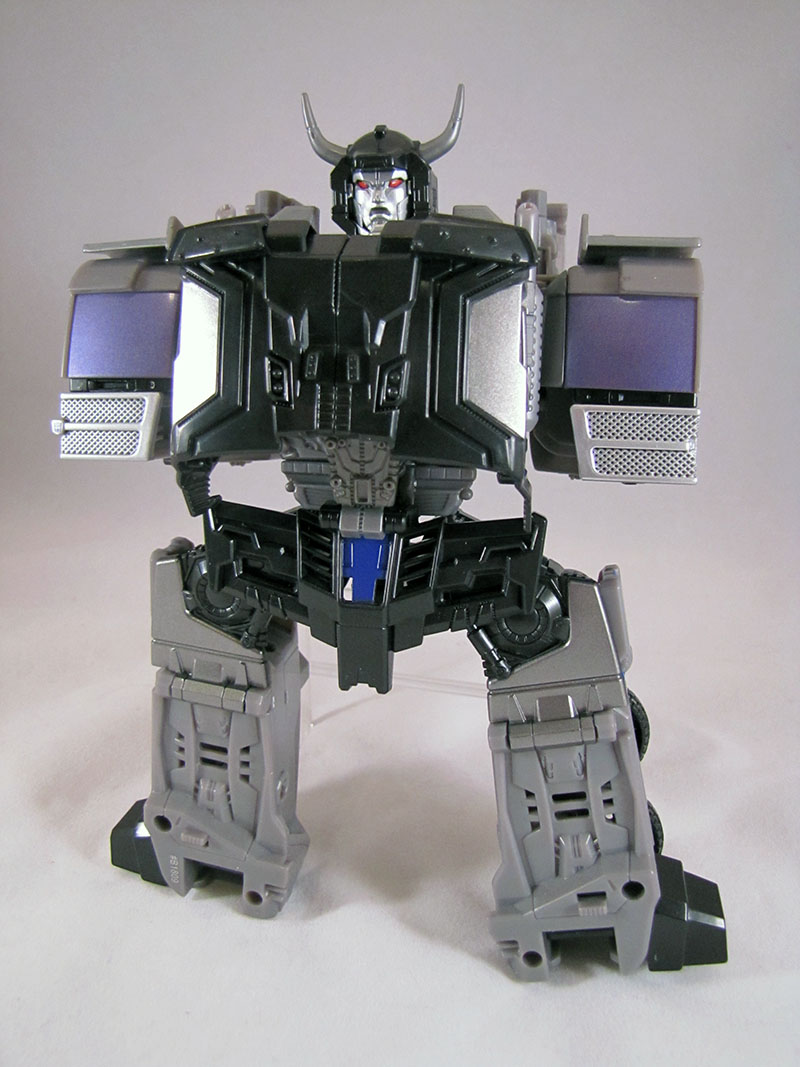 Both these guys are meant to be the torso of a combined super robot, so some key joints ratchet very toughly.  The hips in particular are very solid, and their ratcheting resting points are pretty far from each other, which makes the sculpted slant at the bottom of the toes feel silly.  There's no ratcheting point that lines up with how his toes are sculpted against the ground. 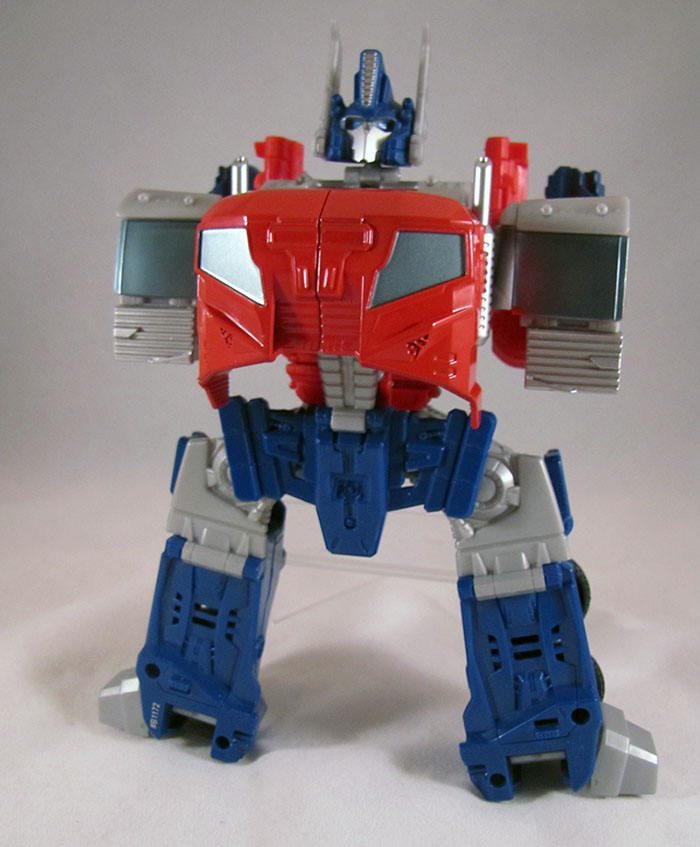 Optimus Prime's a beefy Prime, very wide and boxy, which are traits we don't get in an Optimus Prime toy much anymore, so I like him for that.  Most, if given a choice between the two, would choose Motormaster.  Motormaster gets far, far fewer toys, and other than the obvious Optimus legs the base toy seems geared more towards Motormaster than Optimus.