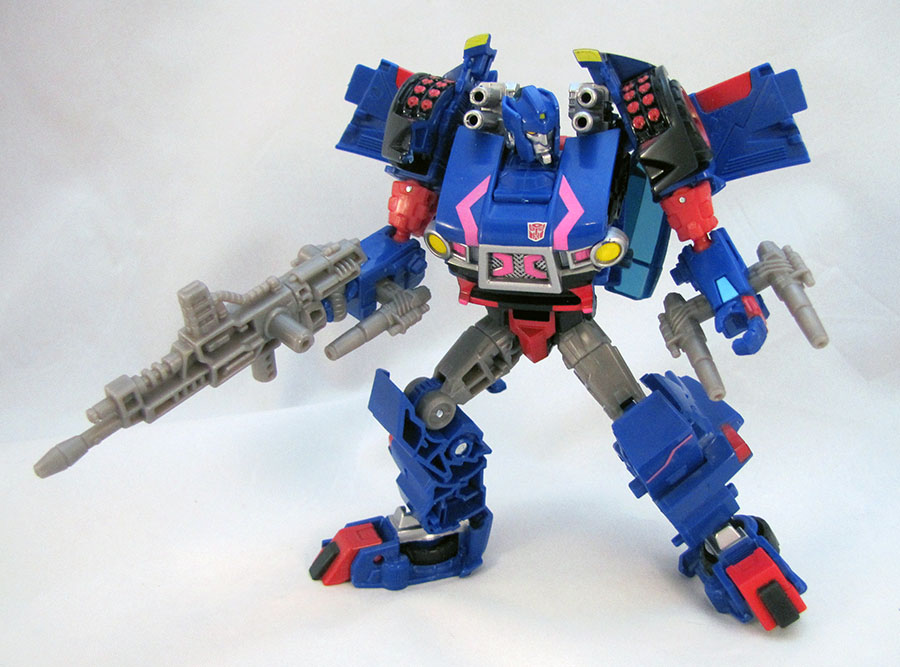 Man, this last bout of new toys sure are just better-decoed versions of stuff I have.  Well, whatever, have a G1 guy instead of a BW guy this time, for variety!

Japan is probably not too big on Skids.  He, like, showed up barely in two episodes of the original cartoon, with a line of dialogue each (performed by a different voice actor for each appearance in both English and Japanese), and Japan didn't get the Marvel comics where he had a spotlight issue and several other appearances.  His toy wasn't released normally over there, as it was available not separately, but only in a boxset with Sunstreaker and Buzzsaw.  And so it's not surprising that it took so long for TakaraTomy to put out their own version of our Generations Skids. 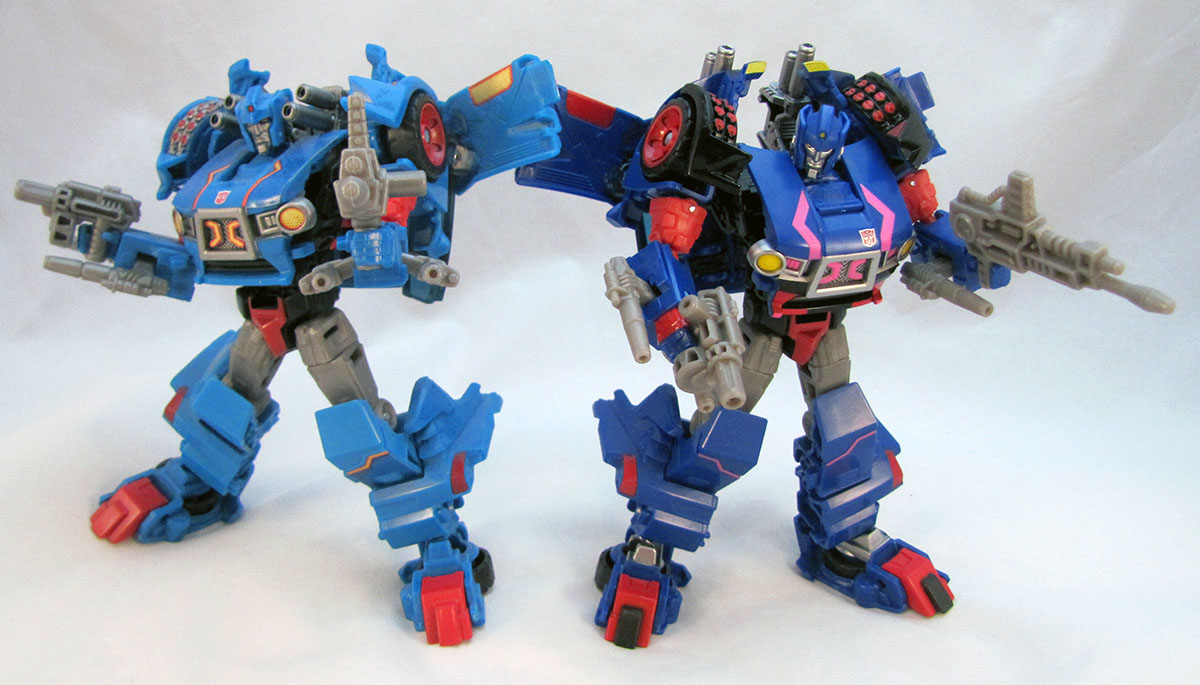 It IS kind of surprising that it's such a perfect deco replica of his appearance in IDW's More Than Meets The Eye comic book series.  Like, I'm not sure that's released properly over there.  I think you hafta get it on iTunes or something.  I mean, there seems to be a small fanbase in Japan for it, but I don't think that's a widespread thing.  Honestly, I don't really know.  My knowledge here is spotty.  If someone wants to fill me in on Japan's relationship with IDW Transformers comics, that'd be neato.

But, yeah, instead of trying to deco Skids hardcore like the cartoon, they made sure to MTMTE him up, including painting pink stripes across his hood despite there not being any sculpting there to suggest a need for that.  Nope, he gets those stripes (and basically everything else) off his color model for an American comic. 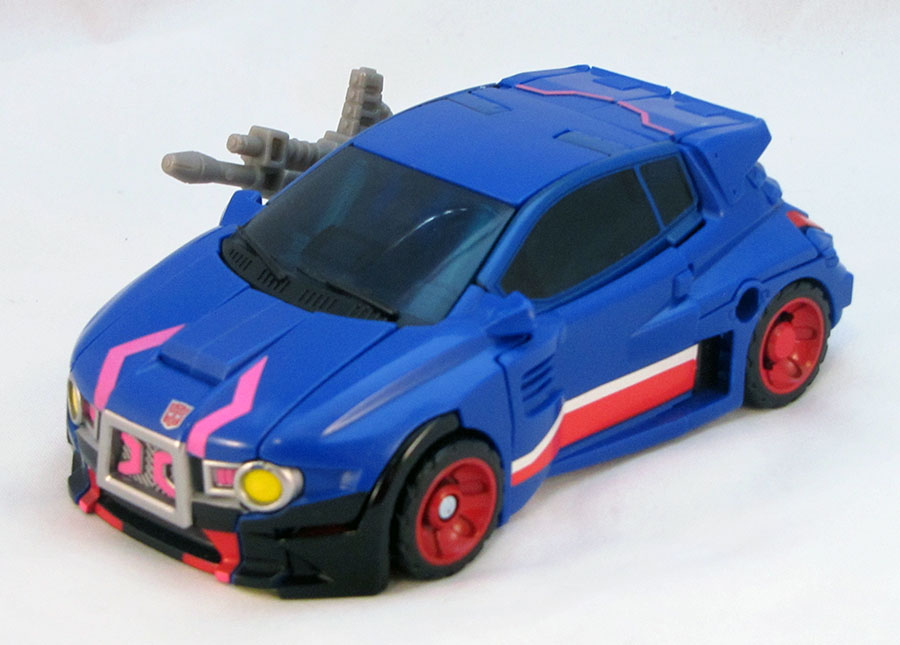 And so, obviously, I had to get him.  I mean, I'd put Reprolabels on my domestic Skids to get those necessary stripes and other details on there (as you can see in the photos -- that toy ain't stock), but this TakaraTomy version is so much more comprehensive in replicating the MTMTE color model than the domestic version + stickers.  He's got the black toes and the silver ankles and the red hands and tummy, and I adore the use of pink for the stripes, as well.

Addendum: After taking a photo of the new toy next to the old one with the stickers, I tried to remove the stickers to get a more fair visual assessment of the two toys unaltered.  BAD IDEA.  Those Reprolabels are not meant to come off.  You leave a lot of silver chrome behind, and I'll probably hafta get some serious Goo-Be-Gone to remove it, if I decide to at some point.  You can get the American toy carded on eBay for like $8, so I'm not sure it's worth selling the thing once I subtract the cost of the Goo-Be-Gone.  If it even works.  Meh!

Tags: skids, legends, generations
View/Post Comments
In which we are never satisfied.
Posted June 1, 2016 at 2:15 am 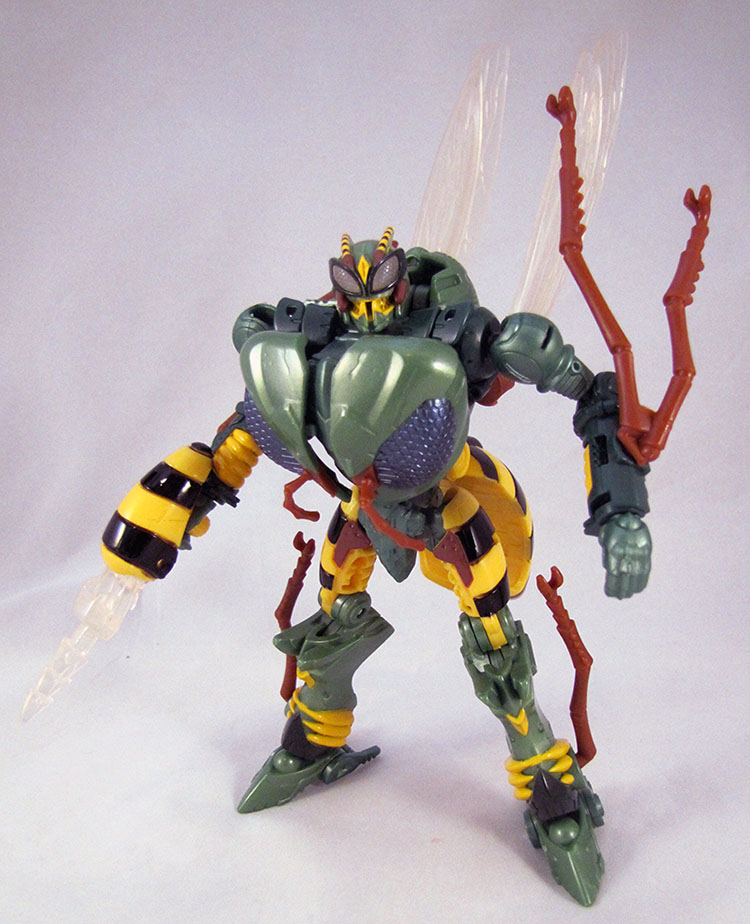 Here is another post in our series of "i bought another beast wars toy because it was painted a little better than the beast wars toy i already have."  Today's subject: LG-EX Waspinator!

Like TakaraTomy's Generations Rhinox, so too was their Waspinator heavily metallic.  This didn't look nearly as weird on him, since wasps are all chitinous (I looked that up, thank you) and less leathery than rhinos.  But it meant his yellows were gold, and so even though it painted his face a little better than the domestic Waspinator, I passed.  I did reconsider a few times, but that version of Waspy's pretty popular and so he's hard to find on the secondary market.  ... thankfully, because then this version was announced.

Bye-bye, gold!  Hello, more-accurate yellow.  And, important to me, they've finally painted the bee stripes on his robot head antenna.  They don't tend to do that!  Probably because that's a hella lotta paint operations.  I mean that's... *counts* 12.  Twelve paint operations spent on 1% of his overall surface area.  If you've got a paint budget, you're not gonna blow it all on danged antenna.  But dammit, it's appreciated.  Thank you, limited-release convention exclusive! 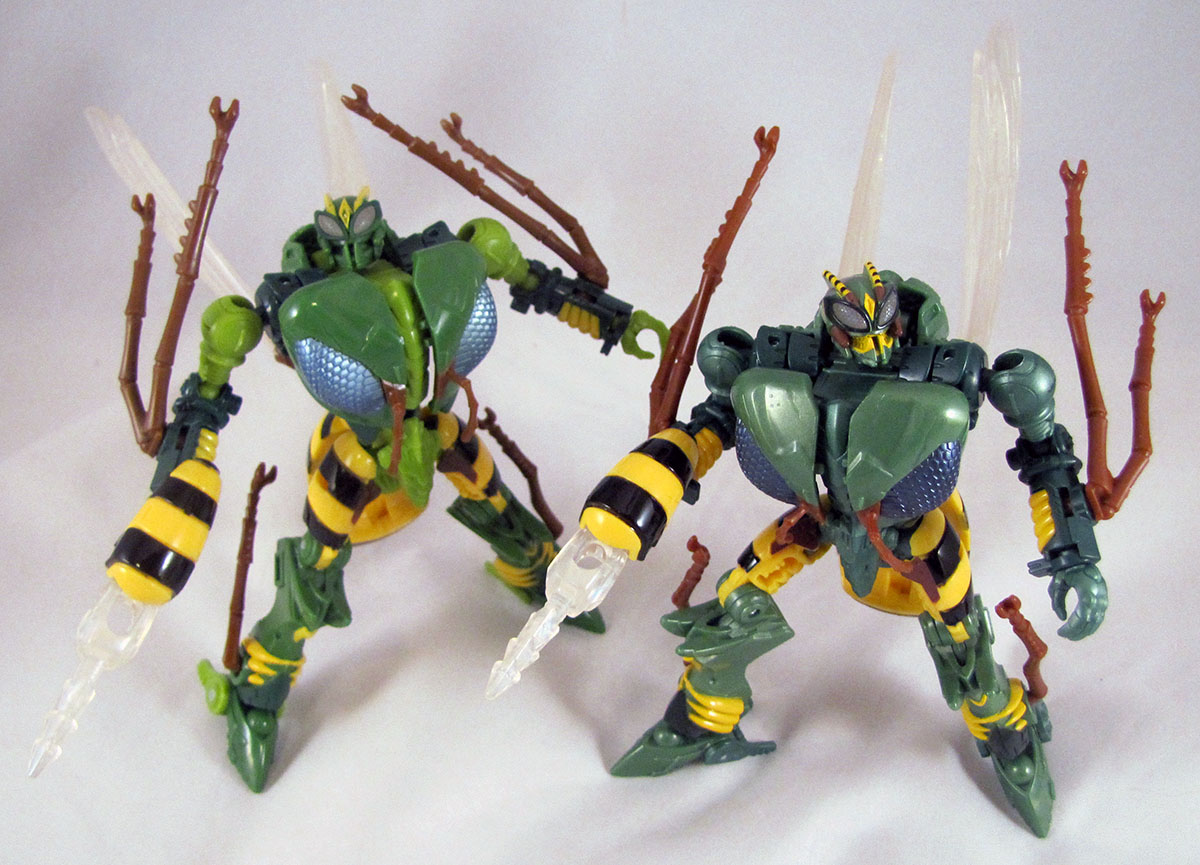 My to-be-imminently-replaced domestic Waspinator has more differences to catalog, versus his replacement.  I love the darker green around his eyes.  I love the brown tusks on his cheeks.  I love his mouth having yellow in it.

I do like the darker green replacing the lighter lime green plastic on his body.  It makes him a more uniform color, but the additional yellow paint operations balance that out, plus it calls attention away from how made-of-robot-parts his wasp mode is.  His thorax is now a homogeneous patch of dark green at a quick glance, rather than a jumble of green with some lime green biceps and fists thrown in there.

I do kinda miss the Predacon symbol that was on the domestic version's beast mode.  Ah well.

Briefly, foolishly, I give my brain the luxury of believing that, yes, this is it, this is the best Waspinator, I don't need another ever again unless it's like a Combiner Limb or something.  And then I remember that, oops, oh, right, they've just started making Masterpiece Beast Wars toys.  In a year or several, we might have a Masterpiece Waspinator.  And once again, what was once sufficient will then be insufficient.

But that's probably not for a while.  I can enjoy this one until then.

ADDENDUM: There is also a redecoed Rattrap from this set, but I didn't bother getting him.  Either he wasn't different enough or my current Rattrap is fine or any combination of the two.

Tags: beast wars, waspinator, legends, generations
View/Post Comments
If I'm gonna get gunned down by chainguns of doom, they could at least be painted
Posted May 29, 2016 at 9:30 pm 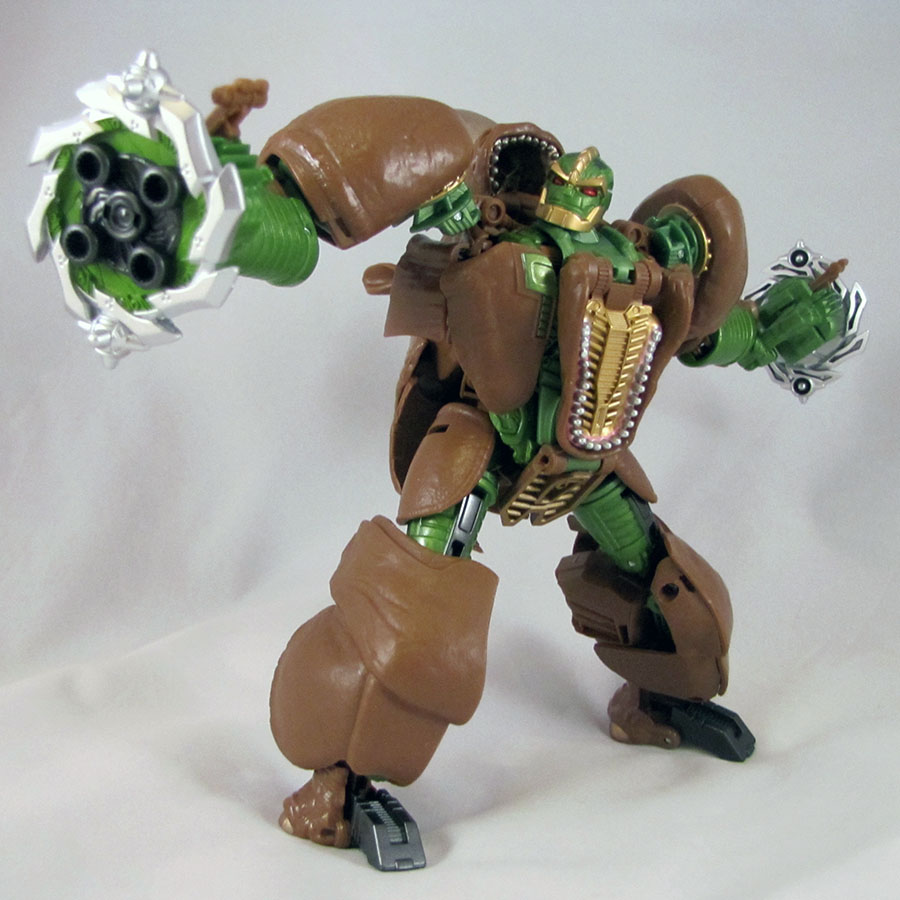 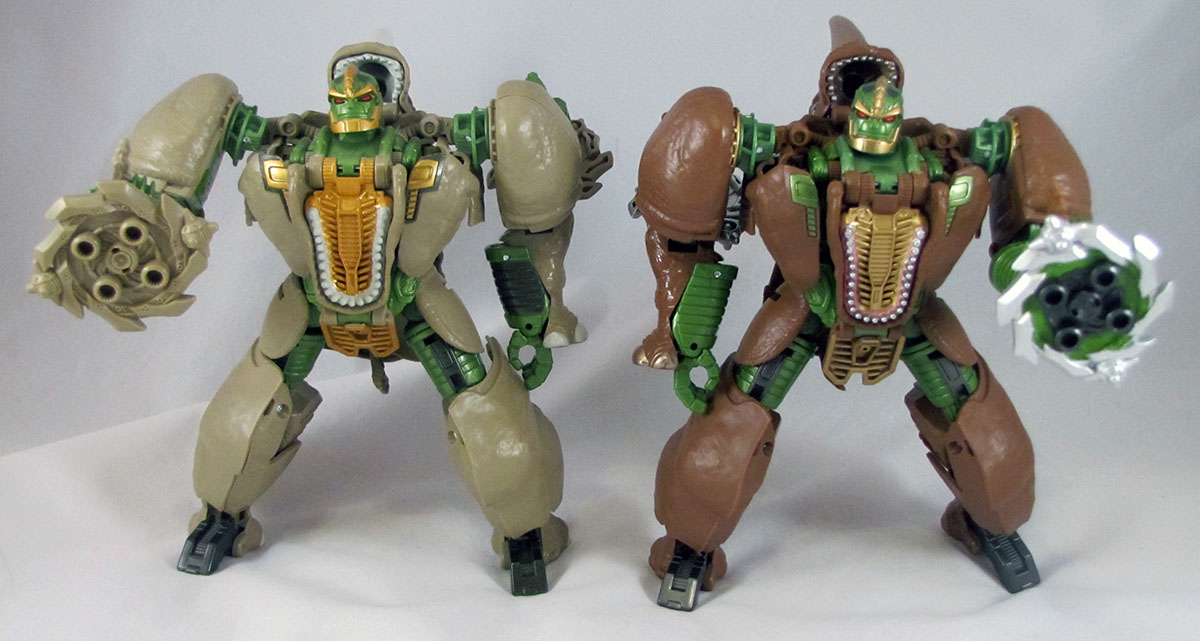 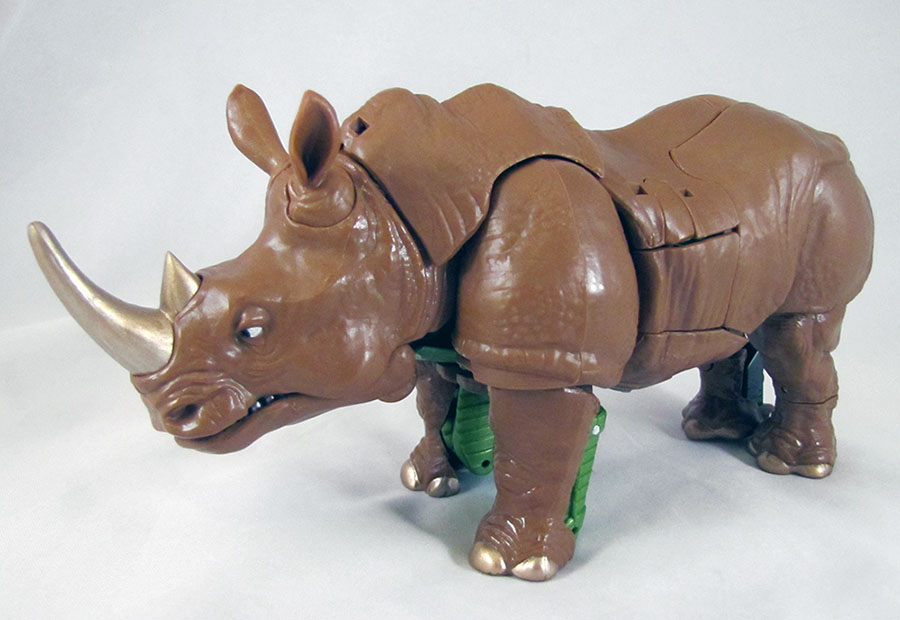