First of all, I'm going to come right out the gate here and ask why the instructions, photography, and promotional material all show Kickback's translucent energon weapons attached to his wings.  I mean, yes, they *can* attach to his wings.  There's slots specifically for that and nothing else.  HOWEVER.

This is not their real purpose.  These two translucent energy weapons COMBINE and PLUG INTO THE INSECT MODE THORAX because they are THE ABDOMEN.  This is the insect mode's abdomen.  Kickback has no abdomen otherwise.  The combination of extra pieces and plugging into the back of the insect mode (there is a combination of a peghole and a guided slot only for this purpose) is what completes the insect mode.  But nothing mentions this!  Nothing!  It seems IMPORTANT!  Attaching them to the wings?  BAD.  Why is this what they advertised?  I don't get it. 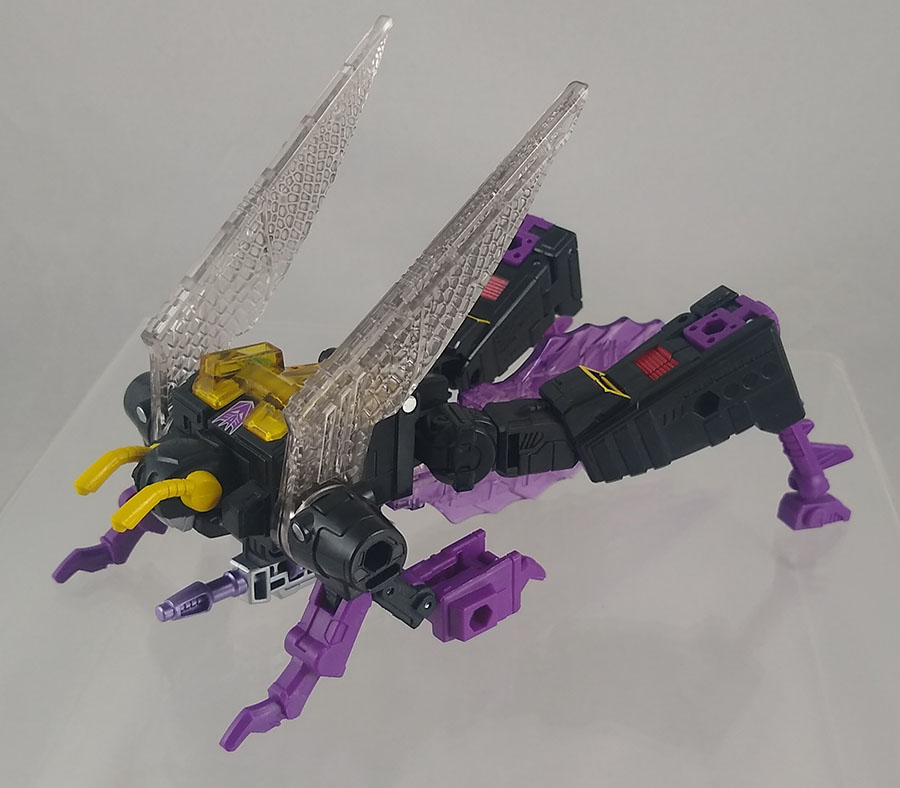 No no no wait.  I'm not done.  Do you REALIZE what this MEANS that his sword things are made out of halves of his abdomen?  It means HE HAS ASS SWORDS.  HE BEATS YOU TO DEATH WITH HALVES OF HIS OWN BUTT.  This is GREAT.  This is INTERESTING.  This is worth my attention.

Otherwise, this is an extremely standard Kickback toy.  He transforms very simply (essentially exactly like the original toy but with a flap to cover up the robot face in insect mode) in like five seconds, tops.  He looks like the cartoon.  If in the cartoon he weaponized his own buttcheeks. 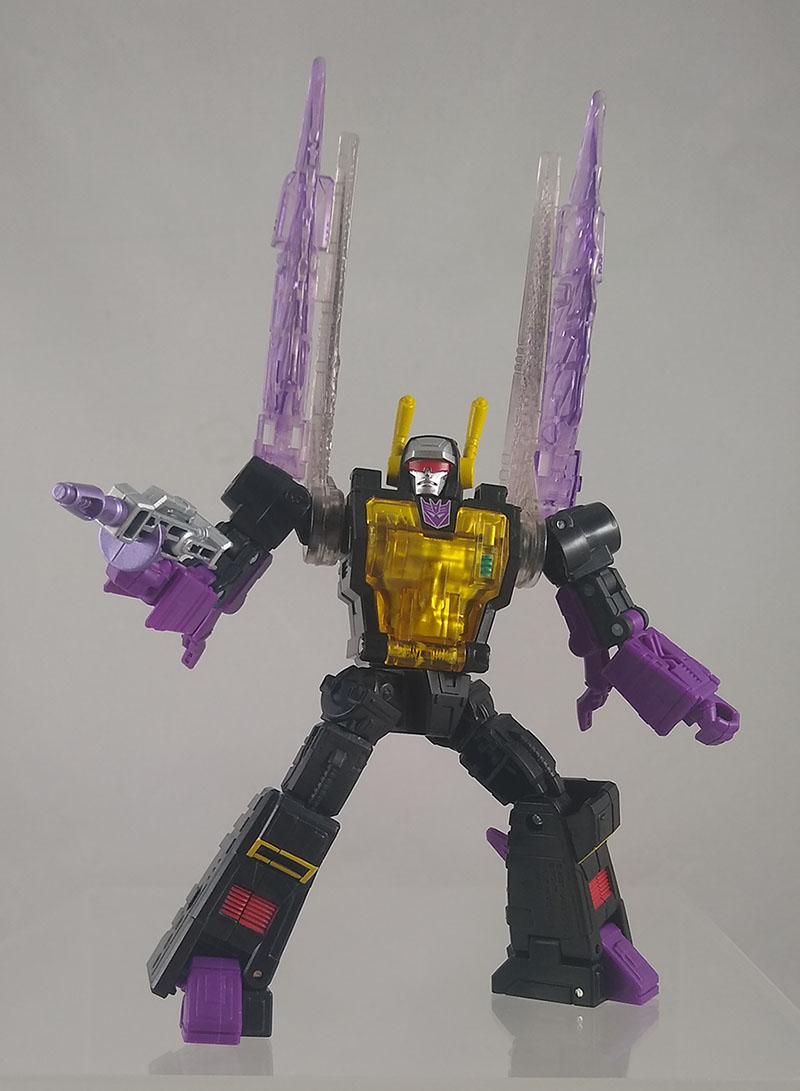 He's bigger than he should be?  Transformers since the beginning of War for Cybertron: Stege has been very good at making toys be the correct size relative to each other.  But Insecticons are, like, Mini-Vehicle size.  I checked!  I watched many cartoon episodes to make sure the scale chart got this one wrong!  Yet Legacy Kickback is regular Deluxe Class size.  Kinda beefy, really.  Hasbro could have gotten away with selling us a smaller toy for our money.

And yet they give us this large-ish toy with even larger ass swords.

You can count the number of (Insecticon) Kickbacks on a Ninja Turtle's hand.  I am imbibing the sauce right now, but I'm fairly certain that Fall of Cybertron Kickback is merely transforming grasshopper Kickback #2.   That's not a lot of toys for a dude who was in the first season of the original cartoon!  He was also a toy I had as a kid, and he starred in one of my favorite Transformers children's storybooks.  You know, the one where Grapple looks like an orange Hook.

I am also super-jonesing for new beast Transformers these days, and Thundertron was kind of a butt.  (Which is a funny thing to call him, since his huge problem is he didn't have one.)  WOULD KICKBACK TURN THIS SHIT AROUND????

Yes and no!  His robot mode is pretty friggin' great.  I mean, look at it.  It's crazy and mean and also crazy.  It's a sharp redesign that loosely interprets the original toy.  He has huge stompy boots and giant claws that reach over his shoulders.  If you want a slightly more G1y look, you can clip his insect wings back onto the shoulder claws, but that inhibits their clawyness.

And his insect mode would be perfect if not for two problems, one of them bad and one of them merely annoying!  The merely annoying problem is that his weapon doesn't store anywhere in insect mode.   It just hangs out. , even off at a dumb clunky angle.  And it's too bad, because it's based on the Gear Shredder weapon from the Fall of Cybertron game, and so it launches a disc.  Grasshopper with a buzzsaw weapon?  Yes.  But it is not so.

EDIT: Apparently it slots in somehow on the claw/wings?  Whaaaaaaaaaaa

The bad one is how notly his grasshopper hind legs peg into the sides of his beast mode.  They just sorta hang out on the sides, flippy floppy, gettin' in all sorts of annoying trouble.  It makes him amazingly fiddly.  This decreases funness!  And it makes me sad.  If there were only a peg or something in there that held it all together, he'd be the bestest.

But at least his robot mode's frickin' sweet.  C'MON HASBRO I NEED A PERFECT NEW BEAST TOY YOU GUYS