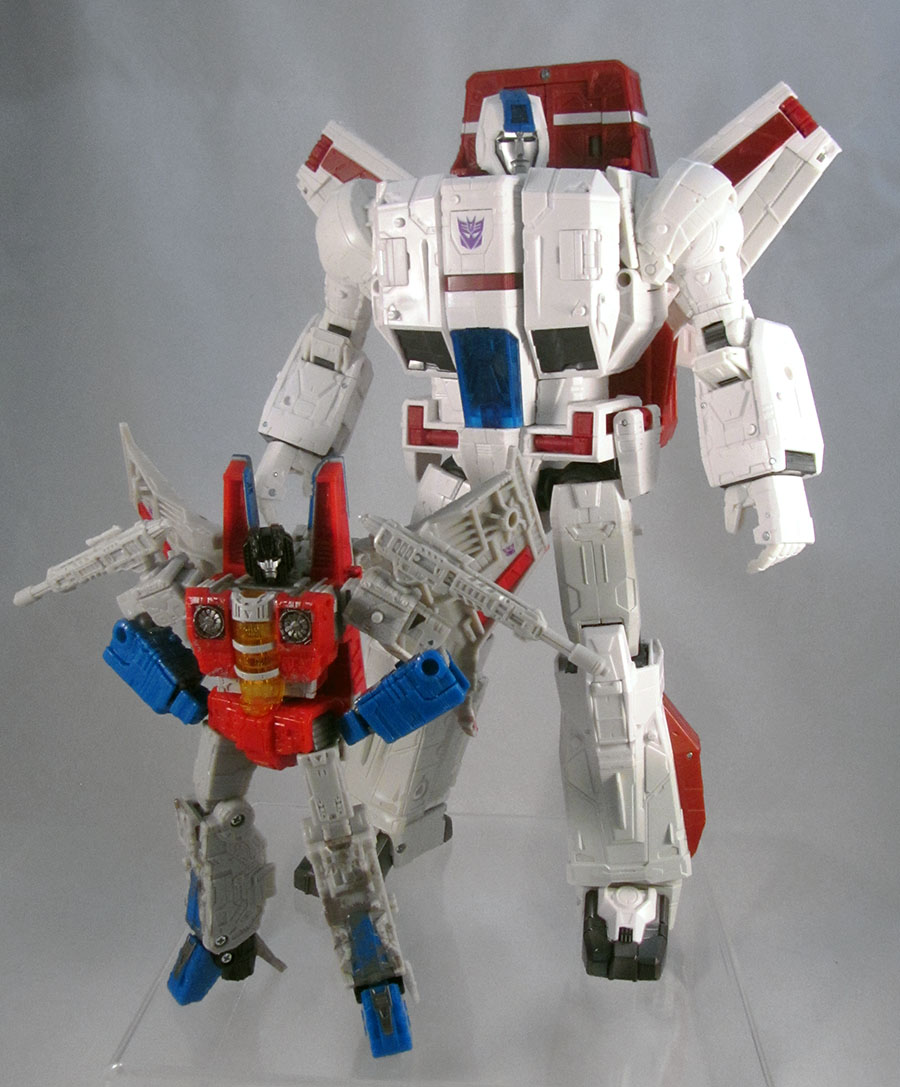 Dang, Transformers: Stege has been so committed to keeping robot mode scale consistent that they up and went and made a new Commander Class price point so that they could do Jetfire at the right size.  This is very crazy and also I respect it.

But yeah!  Jetfire!  He's PRETTY BIG!  Not as big as the 27"+ Unicron that went up for HasLab crowdfunding today, but definitely a large-ass guy!  At over a foot tall, he's nearly as massive as the old Armada Unicron we got, that's how big he is.  Starscream and Optimus Prime only come up to the tops of his thighs.  This is accurate to his portrayal in the cartoon, where he was a gigantic scientist who keeps getting left for dead until the next time the Autobots need him to fly them somewhere.  Because, again, he swol. 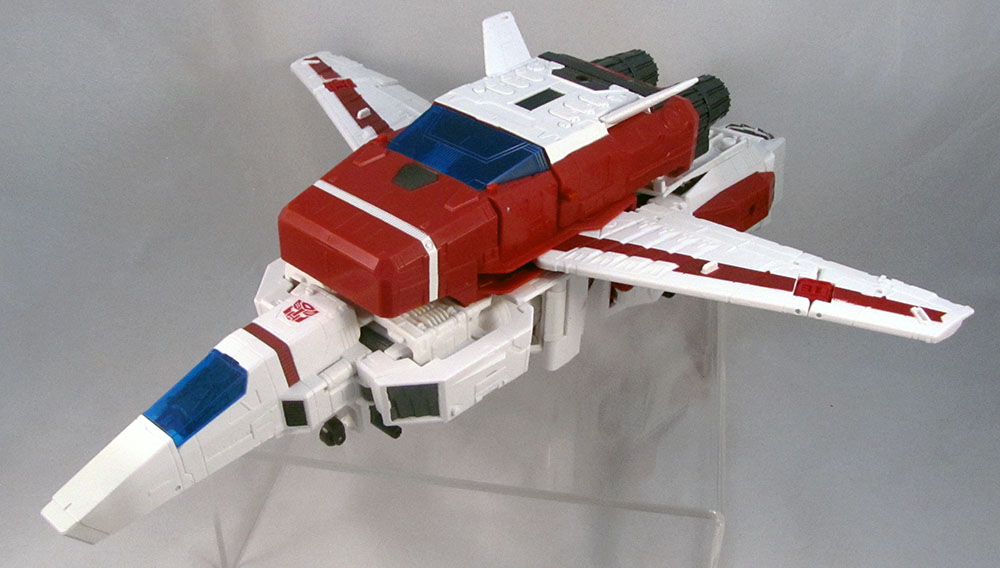 Jetfire has a lot of small... stuffs about him.  Little things, here and there that make you think, yeah, okay, the Commander Class price tag is worth it, hopefully.  First of all, you know those 5mm pegholes they put in fists that let them hold weaponry?  Well, Jetfire has them, sure, but only when his fists are closed.  When you open his fist's fingers out into a relaxed shape, the 5mm peghole hides away into the palm.  Very neat!

The Autobot logo on his chest can be flipped around to display a Decepticon logo.  Jetfire was a former Decepticon in nearly every continuity, so this is a good feature. 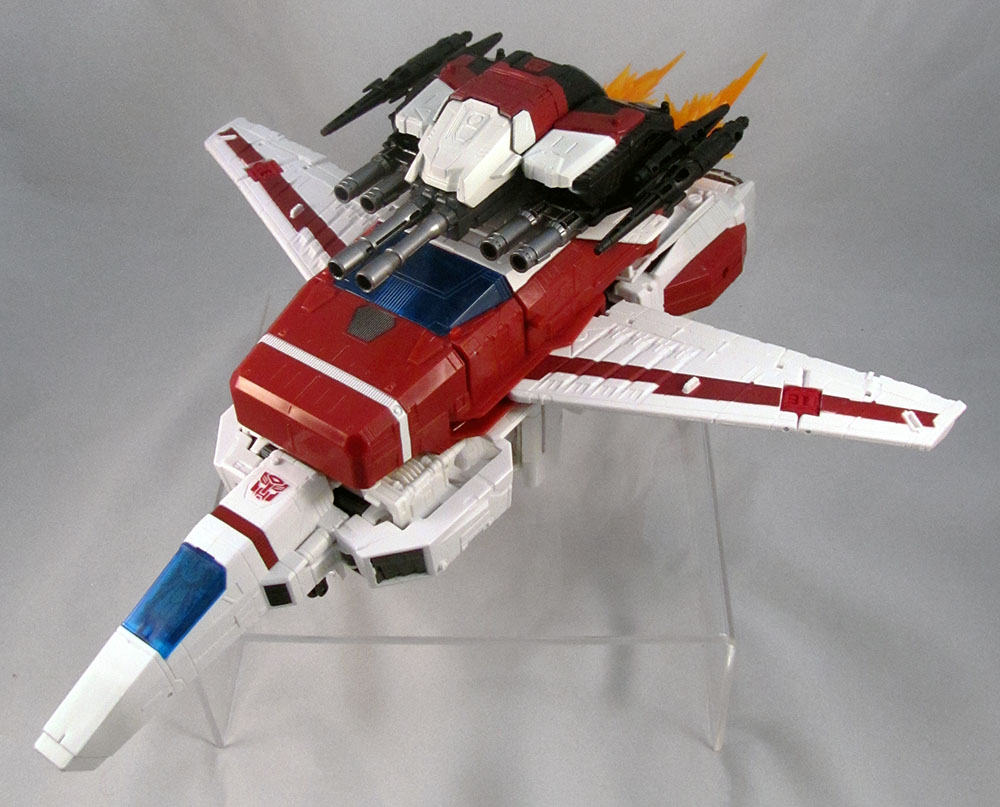 All Stege has waist rotation and ankle tilts, and Jetfire is no exception.  His waist articulation is a little shallow, because of hip kibble, but it's there.  The rest of him is pretty dang articulated!  Again, articulated palms. That Commander Class price point money went into joints.

Open up his jet cockpit.  Pull out the chunk of greeble inside.  Now there's a seat for a Titan Master!  (Remember, the little head guys from Titans Return?)  Open up the other window area on the back of the jet, and there's another two Titan Master seats hidden there. 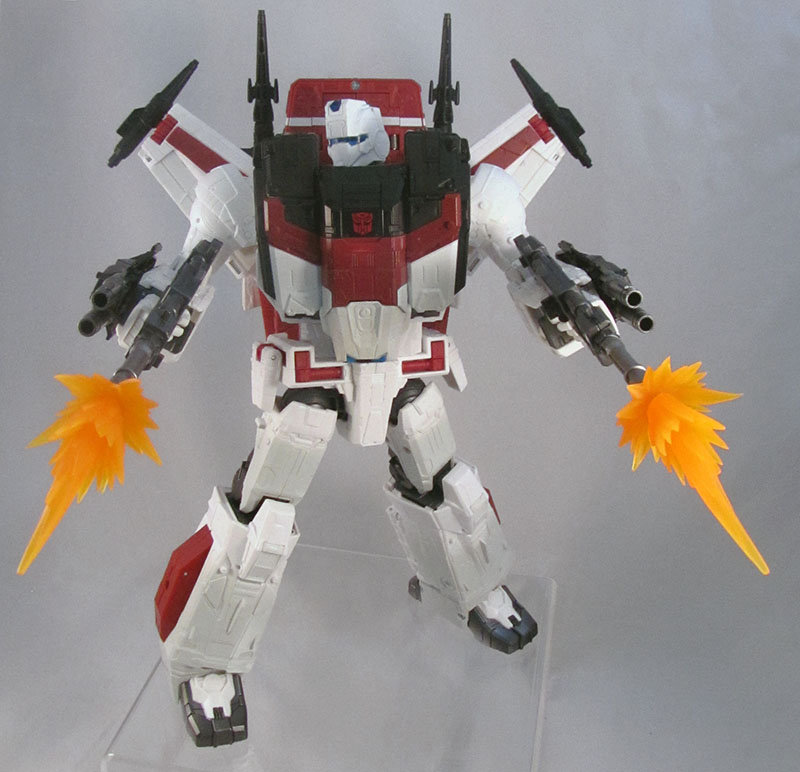 When he's in jet mode, he has four 5mm pegs that can deploy from underneath him.  You can have other, smaller Transformers hold onto those pegs so that they can catch a ride with Jetfire into battle.  This is also very neat, but admittedly hard to coordinate.

Because there's some sort of rule that Jetfires have to have battle armor pieces, Stege Jetfire comes with some of that.  And a mask, even!  It feels very perfunctory.  I honestly don't care for all that junk, but that's not new to my feelings on Jetfires.  I've always tossed that armor stuff aside.  (In jet mode, it all combines into a little hat you can put on top!)

Jetfire's the first toy bigger than the smallest size class (Battle Masters) to come with his own effects parts!  You know, the translucent plastic explosions and blasts and what not that you can peg onto your Stege guys?  Jetfire comes with two thruster bursts, which each can break apart into three pieces.  They're my favorite effects parts so far.  They can work for thrusters or weapon blasts or Jetfire's chest taking hits from other weapons...  Jetfire's effects parts are very satisfying. 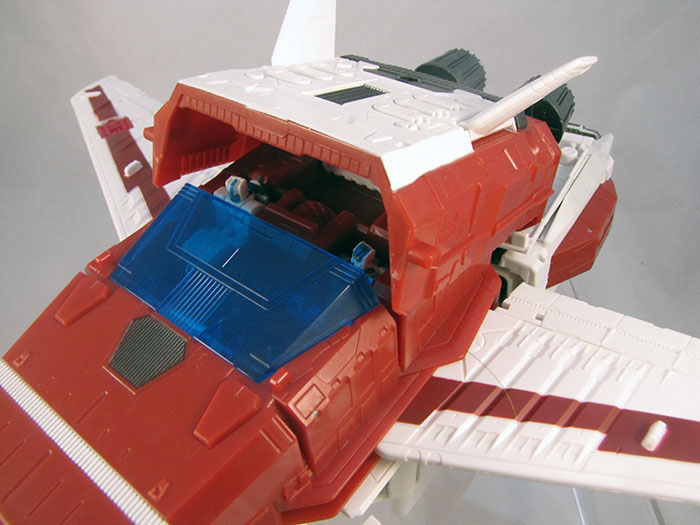 He transforms into that box with wings he was in the original cartoon and comic.  It's not nearly as sleek as the Robotech or whatever thing he was originally licensed from, but that's cool.  Cartoon/comic Jetfire transforms into something that looks like a kid drew it, and that kind of tickles me.  It's the Axe Cop of spaceships.  Again, it's just some boxes with some wings with another box on top with some tinier wings.  And it transforms about how you'd expect.  (Fold out the cockpit, fold the arms under, collapse the legs, lay it down.) 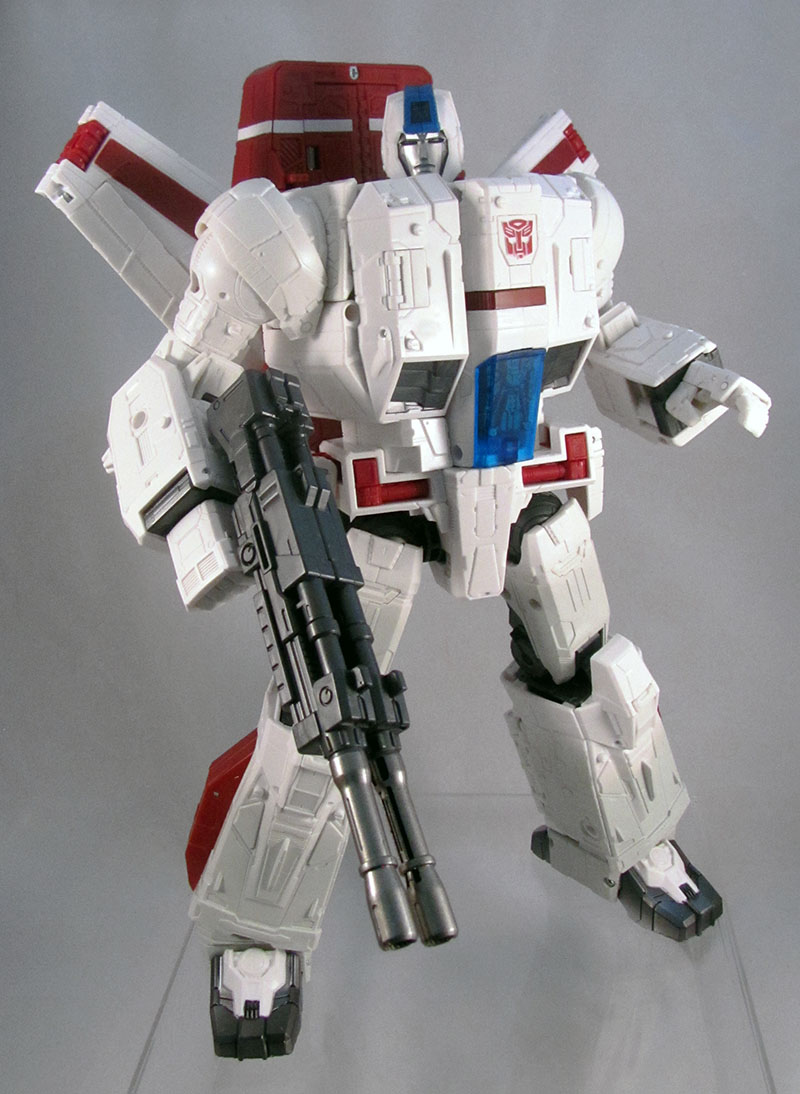 There are some fun details in that otherwise standard transformation, however.  For example, there's the way the wings fold up between robot and jet modes.  The wings themselves transform.  They don't merely swing up.  There are multiple maneuvers that sculpt the tinier, stubbier robot mode wings into the longer, more aerodynamic wings the jet mode has.

He's honestly the Jetfire to end all Jetfires. 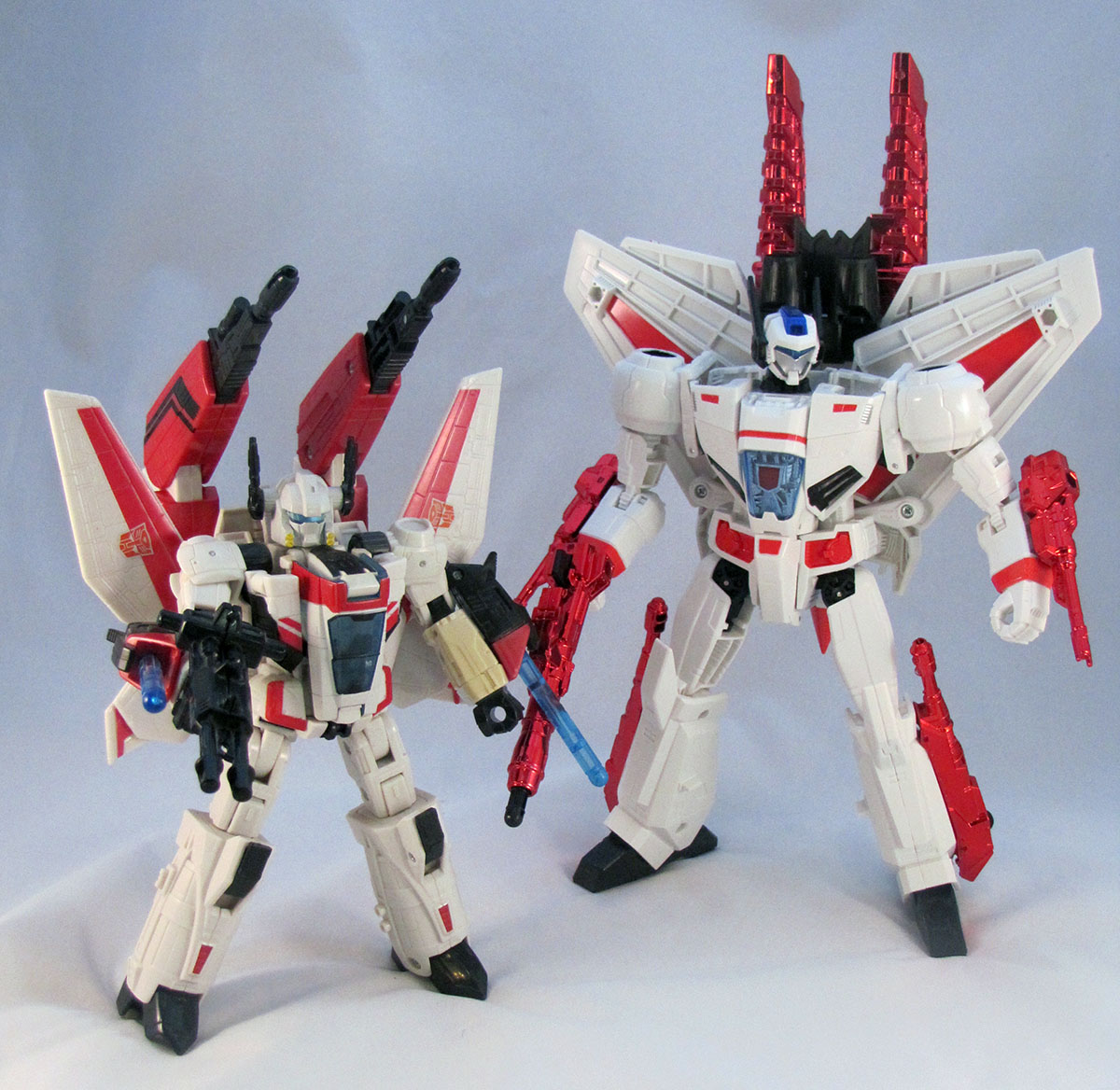 I think for this review of Thrilling 30 Jetfire (2014) a pair of columns of pros and cons versus Classics Jetfire (2006) will suffice. 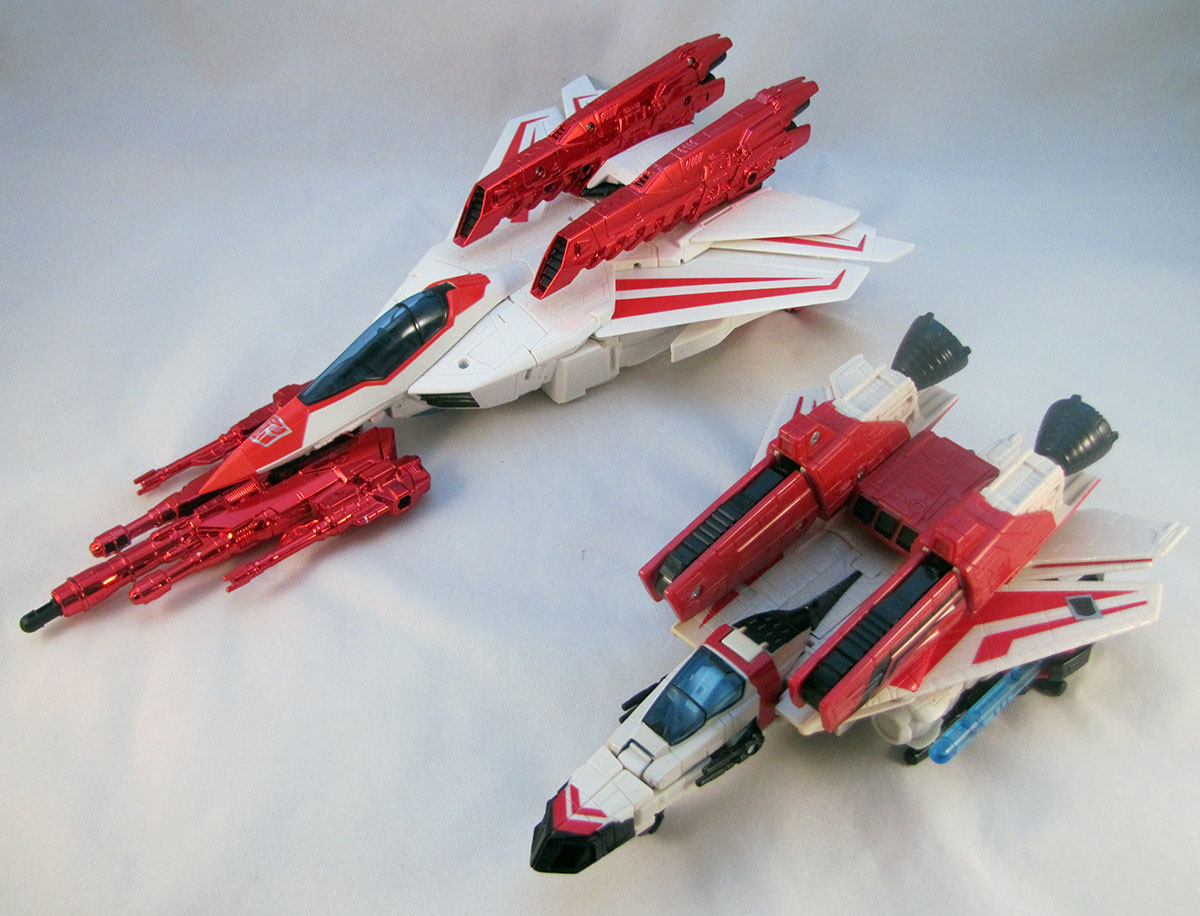 I'm almost always into the little GIJOE dudes we get at Comic-Con, but not so much the giant vehicles they come with.  I am rarely into Joe vehicles ever.  They're huge and they take up space and they're not characters.  Now, the SDCC Joe vehicles for the past three years have been characters -- Transformers characters, even -- but even then I'm not really sold on them.  I have versions of these guys that transform into robots and take up less space.  But if you want to get, like, Decepticon Destro or a GIJOE-style Bludgeon, you also have to swallow the giant-ass rides they come with.  The Shockwave HISS from last year is still the centerpiece of our kitchen table 'cuz there's no where else for it to go.

Currently, Harmony Gold is famously trying to sue Hasbro for this year's Jetfire, claiming it infringes on their ownership of Robotech.  I don't know how that'll go down, but the stated terms of their suit is kind of over-reachy.  They seriously want everyone to return their purchased toys to them.  You do your best, guys, we'll see how that works out.  But the event raised my interest in this Giant Thing I Happened To Buy With My Bludgeon enough to try to start putting it together Wednesday night.

Immediately I had regret.  This thing is so huge.  I mean, I have some huge toys, but there's this algorithm in my brain where the size of a toy needs to match my desire to possess it, and my desire to own this giant Jetfire thing was almost zero, but its footprint in my house was titanic.  I actually started to feel a little claustrophobic as the damn thing took up half the couch as I stickered it.  Halfway through the process, I texted my friend Ron to please remove this thing from my house for me.  (He gladly accepted, but he's currently out of town.)

The jet itself is a Skystriker.  A big thing!  It's even bigger with the newly-tooled jet booster pack that you attach to it, which makes it look more like Jetfire.  There's even room for a new seat in that extra part section.  Seriously, this thing is large.  The stickers are... well, they fall in line with Metroplex's stickers, but less fit-where-it's-supposed-to-go-y.  There're some mislabeled things and some stuff that doesn't exactly fit, and the paper likes to come up along with the sticker part basically always, so it helps to have fingernails.  Don't even try to get the striping around the cockpit to match up.  It won't.  You're just gonna have to agree with yourself that it's gonna be imperfect.