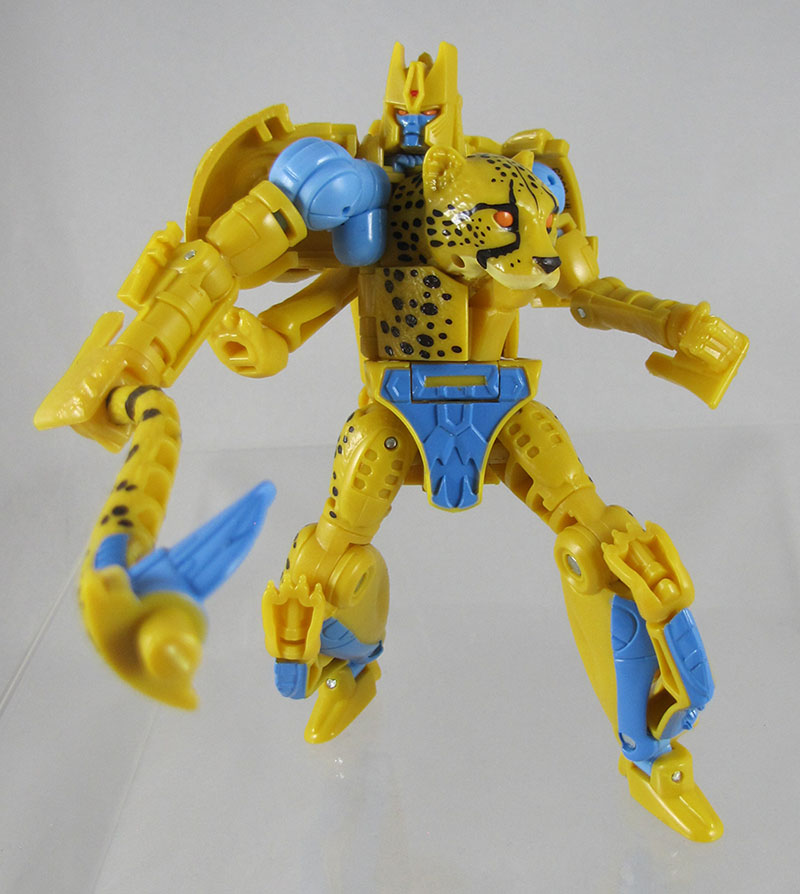 Kingdom Cheetor is an A+ on just the cheetah mode alone.  Remember the original 1995 Cheetor?  That thing was, like, a badger or something, maybe disguised badly as a cheetah after dabbing itself with a Sharpie.  2009's Universe Cheetor tried harder to make a believable cheetah, and it definitely wasn't as chonk, but, like, it had hulked out muscles and stuff at the other ends of its wiry limbs.  It had thighs that Liefeld drawings only dream of.

But now Kingdom Cheetor is here, and it... looks like a cheetah?  I've seen cheetahs at the zoo, and this is definitely the closest by far.  It's skinny and not hulked out.  It's just the shape of a cheetah.  Sure, you can see some robot parts and joints poking out here and there, but it'd be impossible not to.  It's an incredible feat, the level of which only made more apparent by previous attempts. 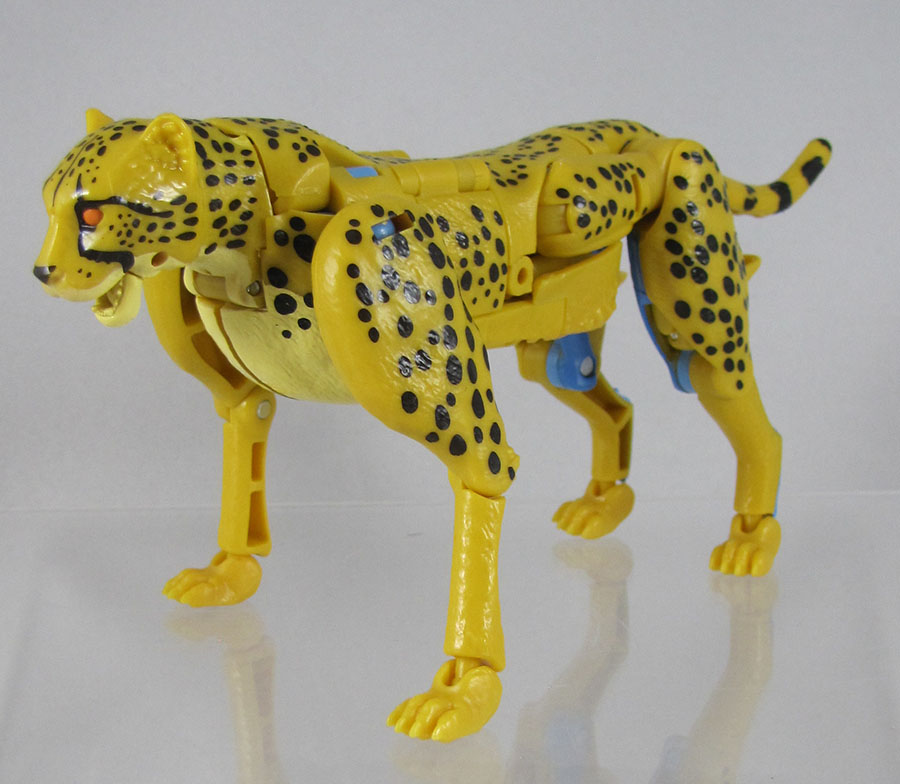 Cheetor falls in line with Kingdom Rattrap in that both try to have more naturalistic beast modes that attempt to transform into the cartoon robot mode best as possible.  Cheetor's robot mode legs fall the most short, but they were always going to be the weak point.  Even at Masterpiece complexity, it was impossible to get clean, skinny cheetah legs into the shape of Cheetor's robust robot legs.  They're different colors, even!  But I think this toy makes the best choice for the price point.  The cheetah shins just fold up into the cheetah thighs, with the details of the robot thighs hidden behind the cheetah shins.  It's an approximation that sacrifices robot accuracy for cheetah accuracy, and that's the right call.  Beast Wars toys should transform into, y'know, believable animals.

Perhaps the weirdest thing about the transformation to robot mode is how the cheetah head-to-chest portion works.  There's a 3mm peg mounted on a diagonally-reaching staff, erected from just above the crotch level.  The cheetah jaw opens and you shove this peg deep into its throat.  Yeah, transformation kind of looks like Cheetor goes down on himself.  It'd be less weird if it felt like it worked better?  It's a very tight fit, and you kind of feel like you're breaking it every time you try to yank his cheetah head off of his tummy dick.  The original Cheetor's cheetah head kind of hung limply from the chest in robot mode, so at least this secures it. 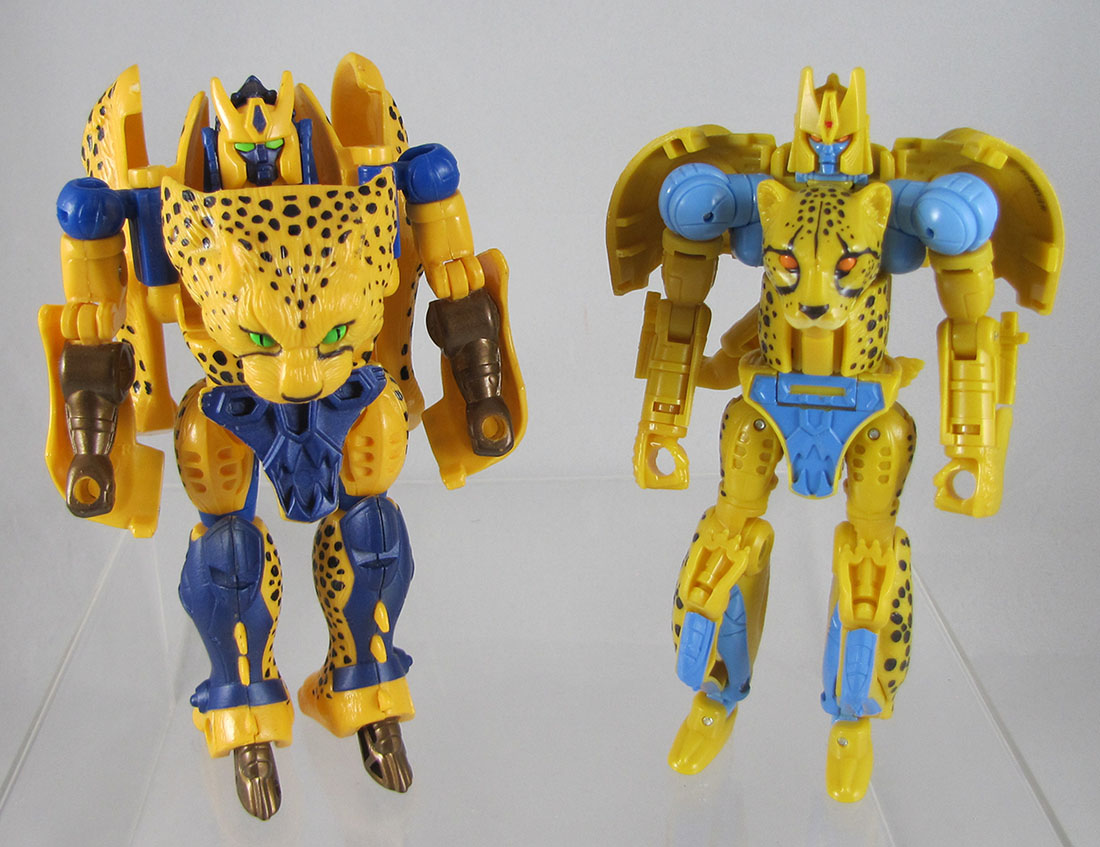 Part of the reason original Cheetor was so chonk was that he came with multiple weapons that all integrated into the cheetah form.  One hid well enough in the butt and came off to form a gun from the tail-section, but there was also a working water squirter that fit onto his stomach.  Kingdom Cheetor ditches both of these in service of a more svelte cheetah mode, with the tail and less of the butt detaching to form a hook-ended whip.  The whip purposefully looks like 1998's Transmetal Cheetor's whip weapon.  This new toy doesn't give you either of Cheetor's classic weapons, but it also doesn't give you a cheetah that looks like it's pregnant with a water cannon.

By far, Kingdom Cheetor is the best Deluxe Class Cheetor.  It looks like the character, it looks like a cheetah, and it's mostly annoyance-free. 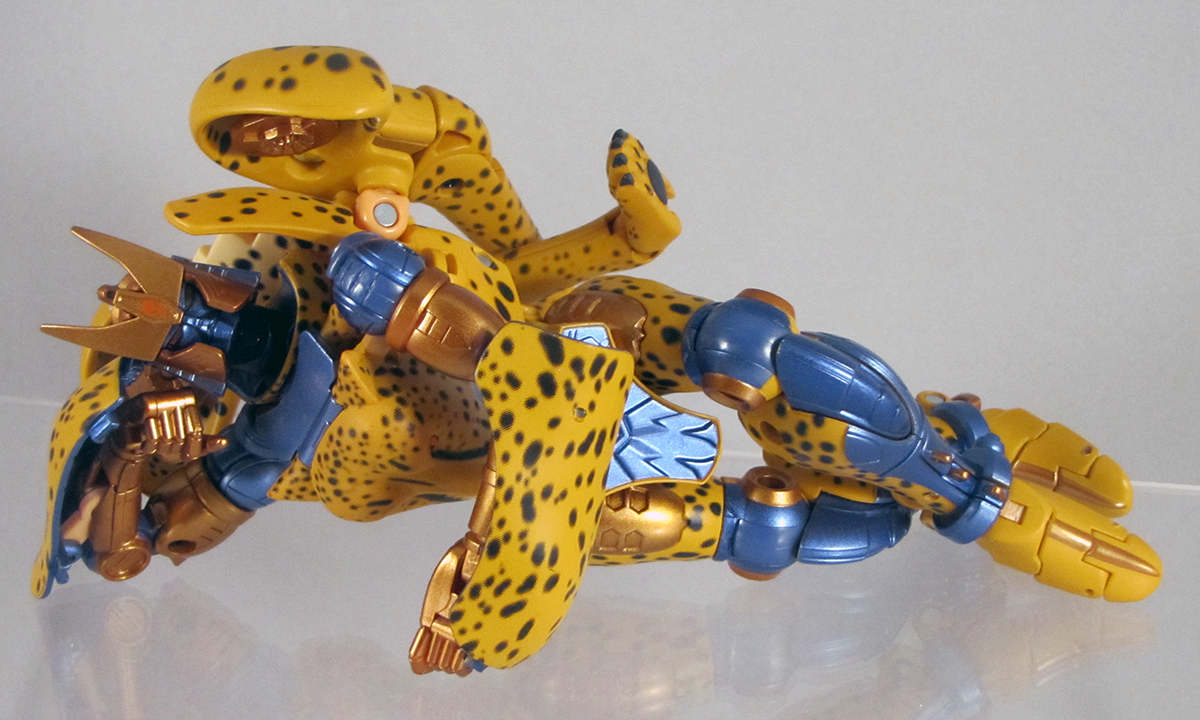 A few months ago, I spent some time marveling at how much Masterpiece Optimus Primal dedicated itself to looking like the CGI model.   Well, motherfuckin' Masterpiece Cheetor is here, and he's all like, ha ha ha, that's cute, but get a load of fuckin' me.

Beyond the observations about Generation One Masterpieces I made in regards to MP Primal, here's another: I feel like the G1 Masterpieces.... homogenize the style a little bit.  They sand down the edges, scootch things to and fro to make a toy look more what a character looks like in your mind's eye.  Heads are shrunk, hands are less big and mitteny, proportions are massaged, etc.  But Cheetor, moreso than Primal, makes apparent to me how much of a bigger commitment there seems to be to making the Beast Wars Masterpieces especially media accurate.  Yes, sure, it has been remarked upon frequently that the spots on Cheetor's surfaces are purposefully made to look stretched like the 90s CGI surface texturing the cartoon model had.  But.... Cheetor's THUMBS, man.  Cheetor's CGI model had long-ass freakish thumbs.  And yet here they are on this toy.  Long-ass freakish thumbs.  No sanding down the edges, no massaging the visuals to look more like Every Other Masterpiece Fist.  He closes his fingers into a fist and his thumb still stretches far beyond like the head on a coiled snake.  It's just Cheetor's actual freakishly awkward CGI hands, replicated in plastic. 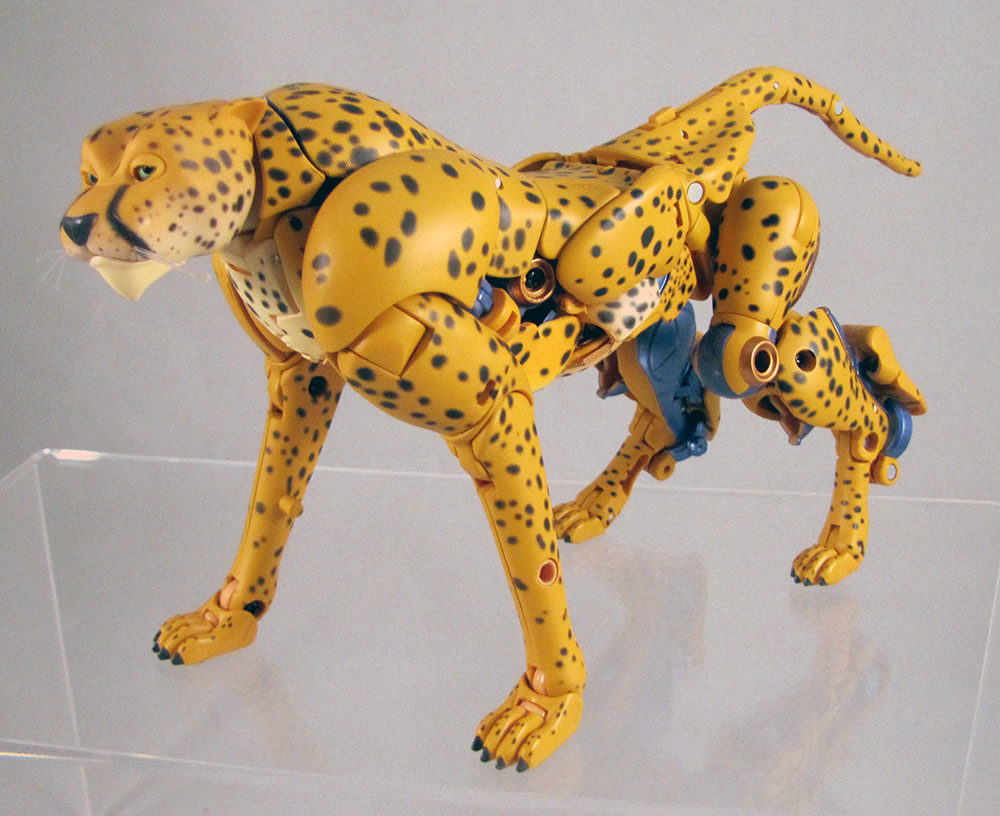 And I eat this shit up.  I do.  It's embracing the wrinkles of Beast Wars and not just our fuzzy happy half-memories of it.  It's not Beast Wars: But FIX'D, but just... Beast Wars.

The toy itself, much like Primal, transforms similarly to the original.  The cheetah forelegs still end up on the back, the robot forearms still hide under the spine just behind the cheetah head, the robot legs still become sort of cheetah hind legs.  There's a t-bone steak-shaped piece on the small of the cheetah's back that flips down to be Cheetor's crotchpiece.  The differences between old and new are all in the details.  The cheetah forelegs are now articulated (versus not at all) so that they can fold across each other on Cheetor's back.  Pulling the robot arms out of the cheetah's back is a little more complicated now; there's way more moving pieces involved to get things just so.  The hind-leg-to-robot-leg transformation is... I mean, you still see robot parts easily in cheetah mode.  You're going to.  It'd be impossible to engineer otherwise.  But it minimizes the robot parts as best as one could hope while also making a more natural cheetah hind-leg shape. 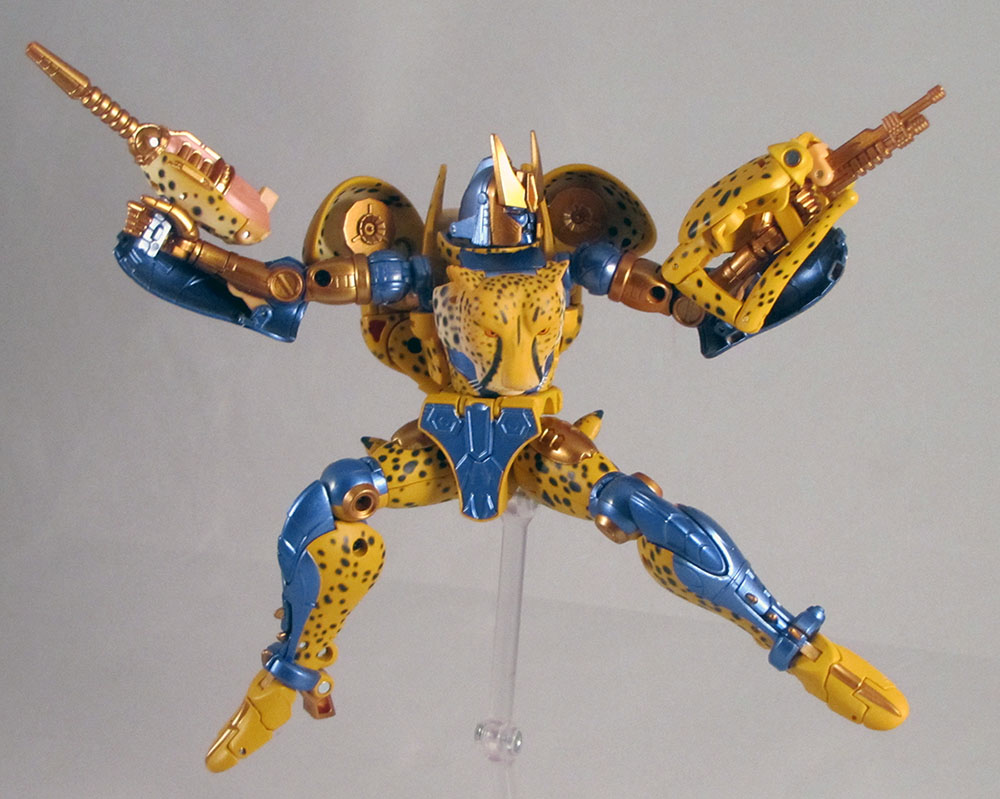 There is a crazy amount of paint on this guy.  I spent a good while trying to identify places on it that were unpaintable nylon plastic, because 99% of his parts have paint on them somewhere.  But there are a few small hinges here and there that appear to be unpaintable nylon, like the yellow inside the cheetah forepaw's wrists.  (Unpaintable nylon is generally used for structural reasons, which is why HasTak bothers to use it at all, and it's why you can find it buried within MP Cheetor's joints only.)  All of Cheetor's gold is paint, so you don't hafta worry about GPS.  Altogether, MP Cheetor is just ... visually dense. 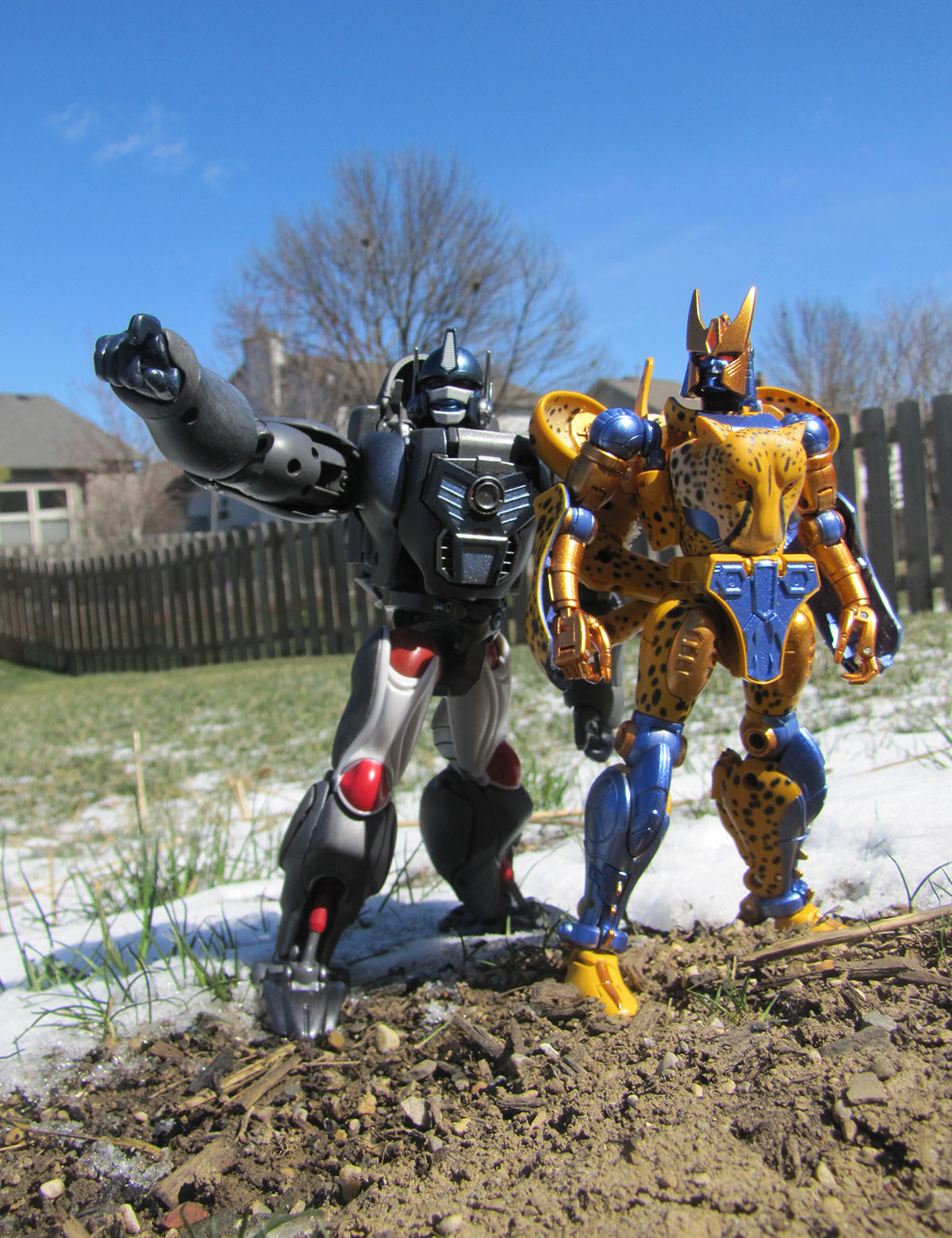 Like MP Primal, he has a set of swappable heads with different expressions for both robot and beast modes.  For robot mode, he's got Stoic and Grrrr Angry and OH SHIT, and for beast mode, he's got Half-Lidded Stoned, Grrrr Angry, and OH SHIT.  The beast mode head's jaw is openable in each iteration, and also there's three sets of eyes you can swap into whichever beast mode head you're using.  One set looks left, another center, another right.  It's not QUITE as elegant an eye articulation solution as with the Figma Elsa (let it gooooooo) I have where the eyeballs are literally articulated (but you have to use a little pick to move them), but I appreciate that this is an option at all.

MP Cheetor comes with two guns.  The original toy had two guns, as well, but only one of them made it onto the cartoon showed up much at all.  The original toy had a water squirter gun fashioned from Cheetor's intestines.  You heard me.  Anyway, that's the one that was frequently represented on the cartoon.  The Masterpiece version doesn't watersquirt, sadly, but it does finally paint those intestines pink.  The second weapon, was Cheetor's cheetah ass.  You ripped off his ass and folded back the tail and there was a barrel under there and Cheetor grasped his own ass and shot his ass at you.  The Masterpiece version is very similar, only differing in how the tail folds underneath instead of over the top.  My favorite part is how the Masterpiece version of the gun borrows some of Cheetor's midsection and sculpts them into the buttocks-shapes of the original toy's ass gun.  Cheetor's ass gun is no longer made out of ass, but transforms from non-ass into a more ass-like shape.   For nostalgia. 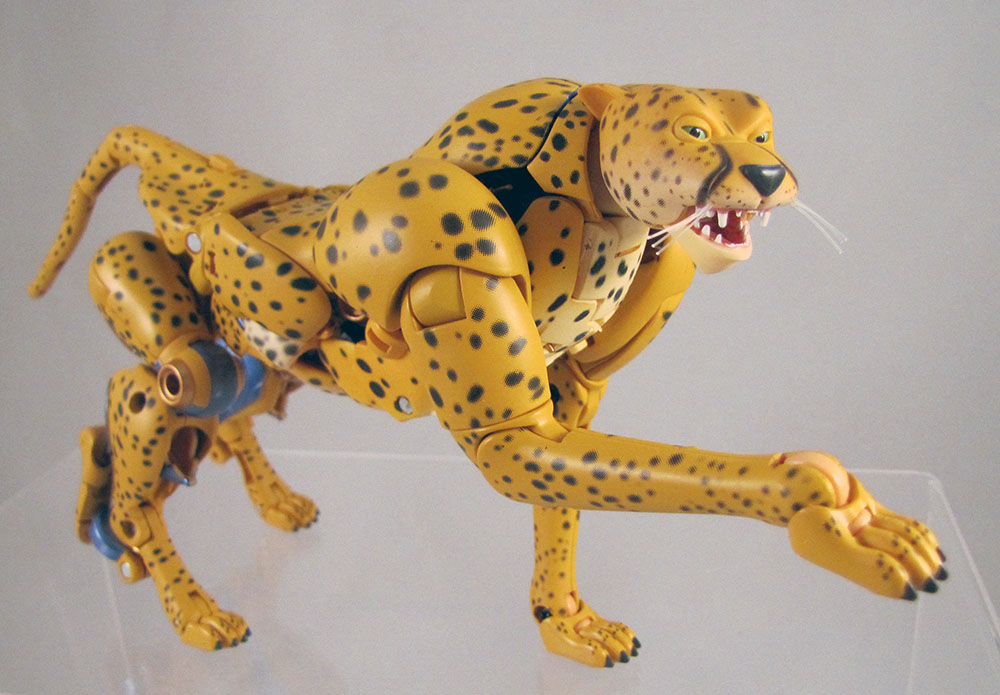 You can stow both weapons on his back in robot mode.

THIS TOY IS AMAZING.  It is not perfect, though.  One, he's really bad at holding his ass gun.  It doesn't peg into his palm like the gut gun, and you kind of just have to wedge it loosely into his grasp and hope gravity and friction work.  Secondly, and this is the biggest, he doesn't seem to, like, peg together in his cheetah midsection in beast mode.  Mind, when you set him down in cheetah mode, this self-resolves, because he is jointed so that he closes himself up if he's standing on something.  However, once you pick him up, he kind of flops open like a real cat hanging over you lazily but if a real cat also showed you the robot parts inside him while he did so.   Cheetah mode is FOR DISPLAY ONLY, it seems.  You pick him up to play with him and he kind of goes ploop.  It's weird, because the rest of him is so satisfyingly stiff. 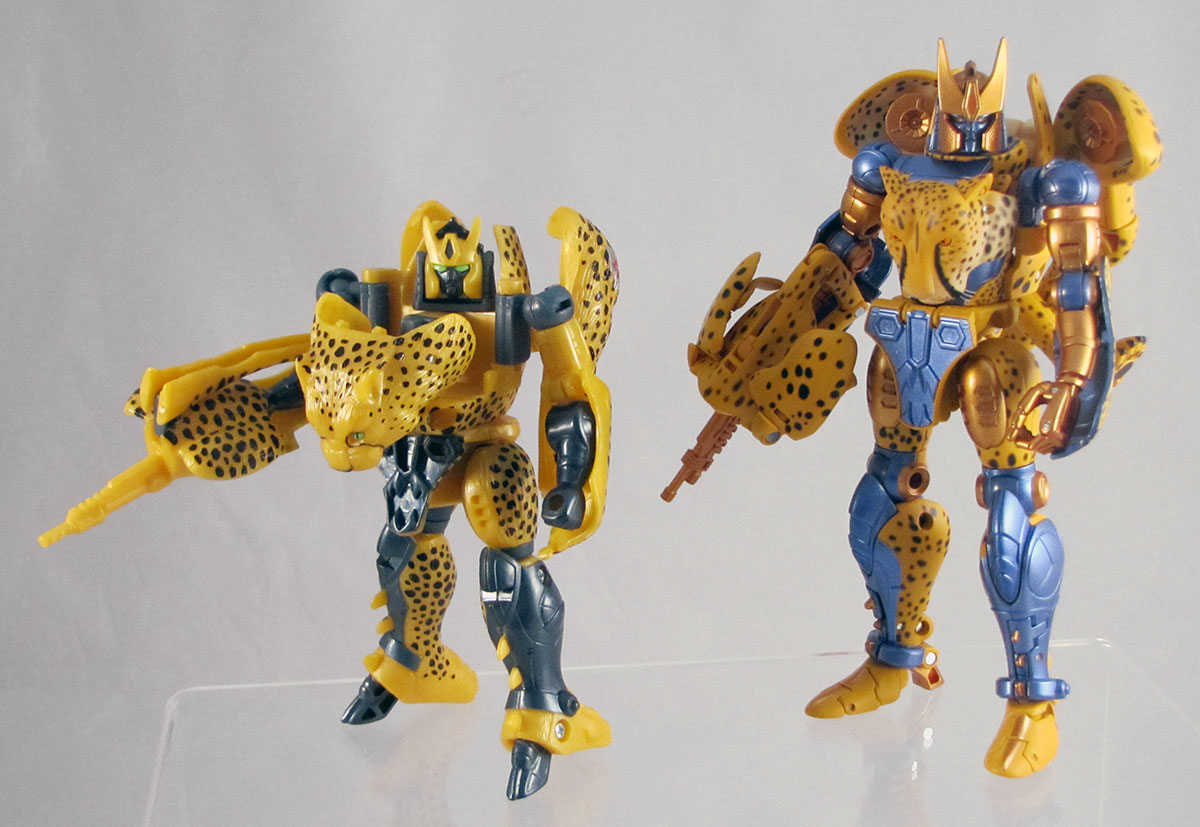 That's it, that's what's wrong with him, setting aside the "is the fake cheetah head on his chest a bad thing" situation.  There is so much love in him, though, those bits are overshadowed pretty strongly.  I don't even fucking like Cheetor that much, and I have fallen hard for this action figure.

NOW WHERE IS MY DINOBOT, GIVE ME DINOBOT, HE WAS ANNOUNCED, SHOW ME PICTURES