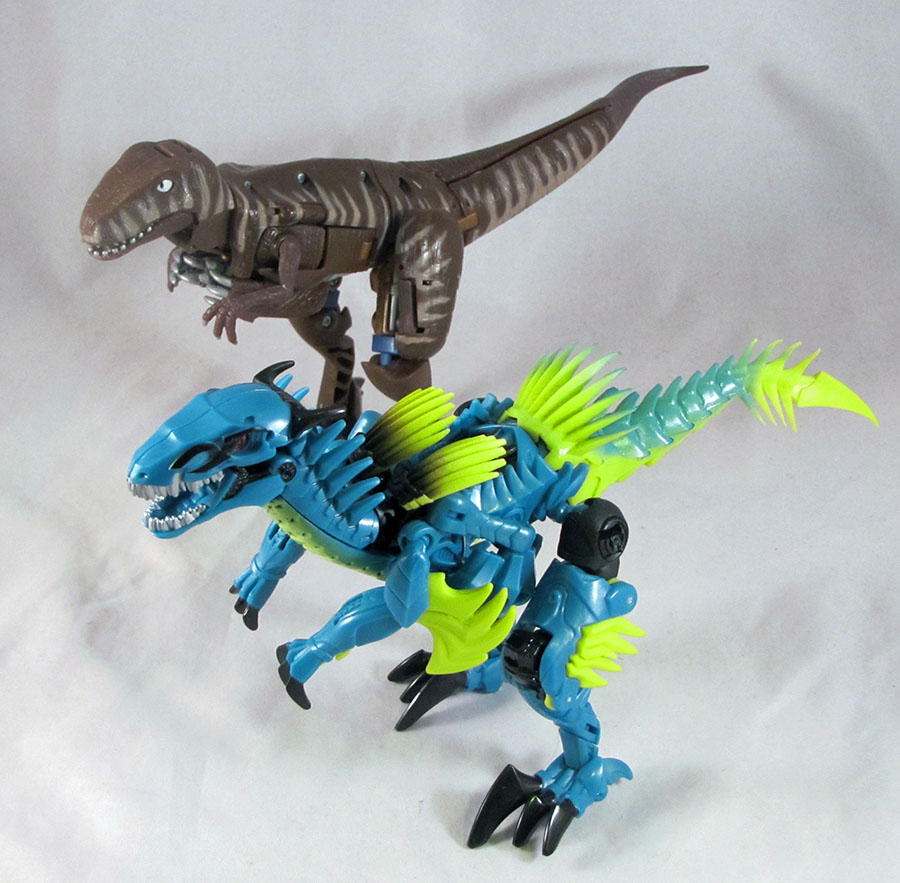 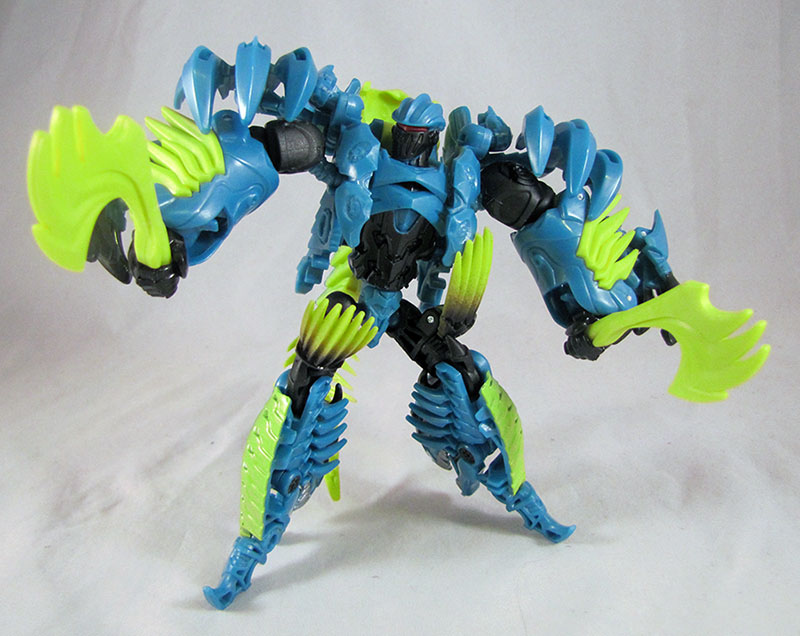 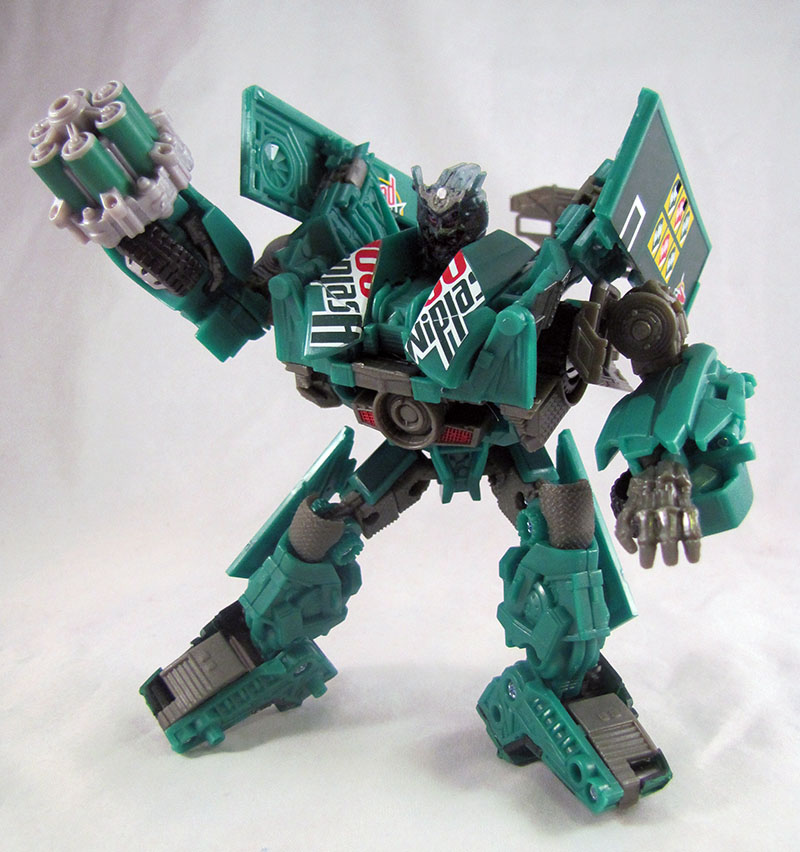 Way back in the first live action Transformers film, near/during the climax, the AllSpark started going nuts and bringing life to ordinary machines, making new Transformers life.  (New, expendable Transformers life.)  One of these guys was born from a Mountain Dew pop machine.  He'd later get his name from a fan who shouted out "Dispensor!" at Hasbro panel after they'd asked for suggestions.  (Hi, Susp.)  Anyway, he's got kind of a cult following and even got a little Robot Heroes figure.

But TakaraTomy was all "Dudes, that is not enough," and for their "Movie Advanced" Age of Extinction toyline, they grabbed Payload, who was an armored money truck from the first filme's toyline, gave him a new head and arm attachment, and dubbed him Dispensor the pop delivery truck.  We first got word of this being a thing that would happen from a really super-fake reading list of toy solicitations.  I mean, why the hell would TakaraTomy make a new Dispensor and spend money retooling an older toy to do so?  It'd be insane!  List must be fake. 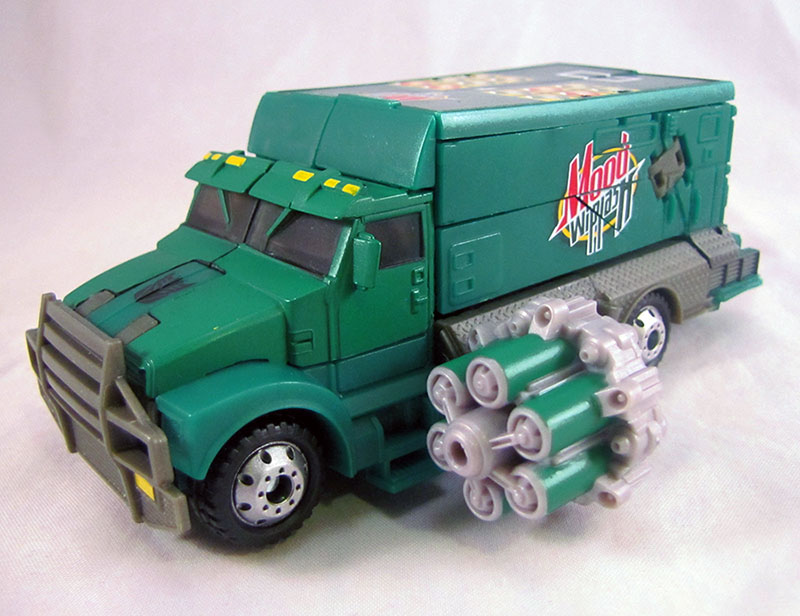 Instead, no, this world's gods are benevolent, and he is real.  Payload, who he's retooled from, is a toy I personally haven't owned, so the toy itself is new to me.  Back in 2007, Payload was one of the generics from the accompanying licensed video game.  His most distinguishing feature in robot mode was his single-lensed camera head, shared with the other kinds of generics, so replacing it with a new head really makes this version of the toy stand out as his own guy.  The new arm attachment is nice, as well, since Dispensor's most distinguishable feature was his arm which fired pop cans.  It pegs over a forearm (if you don't transform out the hand) or pegs into either side of the vehicle mode. 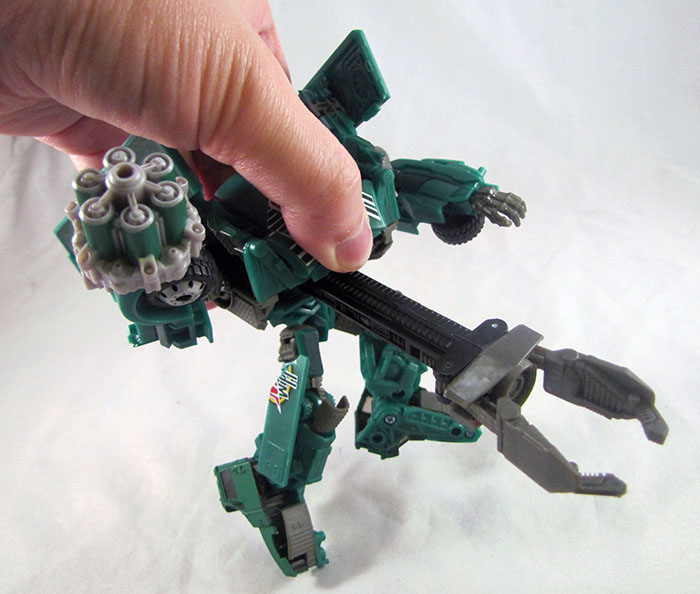 Same as with Payload, Dispensor's secondary gimmick (after transformation) is the large claw that emerges from his chest.  When not emerging, it sticks about half a foot out the back of him.  This makes his robot mode a little back heavy, and you have to pose him leaning over forwards a little to accommodate this.

A pop machine is painted on the top of the truck.  You could stand the truck up on end to pretend he's a pop machine, but the thick rear bumper kind of gets in the way of doing this.  Instead of saying "Mountain Dew" like it did in the film, he instead has Mountain Dew-esque logos on him which read "Mood Wiplash," a misspelled name of an alcoholic Transformers drink from the More Than Meets The Eye ongoing comic book series. 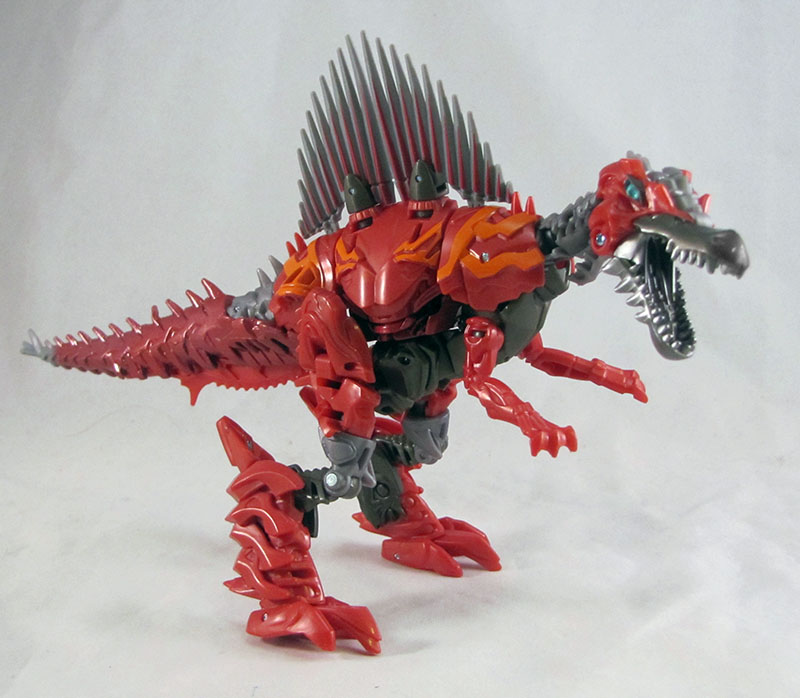 Dinobots!  I don't care what your opinions of the Michael Bay movies are, they're giving us Dinobot toys now, and so that means they have now been totally justified forever.   Emotionally shallow?  Dinobots!  Annoyingly jingoistic?  Dinobots!  Frequent racist undertones?  .... Dinobots....?

Well anyway, here's Scorn.  He's a new Dinobot, a spinosaurus, and he has a new name.  And it's a pretty good new name!  It's a one-syllable word that starts with S, so it's off to a great start by fitting the existing pattern, but the actual name is, y'know, Scorn, which is pretty awesome in itself.

Presuming he's in the film, he likely won't be this bright red and orange the toy is, which is too bad.  I mean, I understand why the toy is bright colors -- Hasbro has a job to do, and that job is to sell attractive-looking toys to children.  And, well, a span of like seven solid gray dinosaurs doesn't seem all that exciting on pegs.  Or in the movie, really, but oh well.  I've stopped caring about movie accuracy.  Give me a red and orange guy. 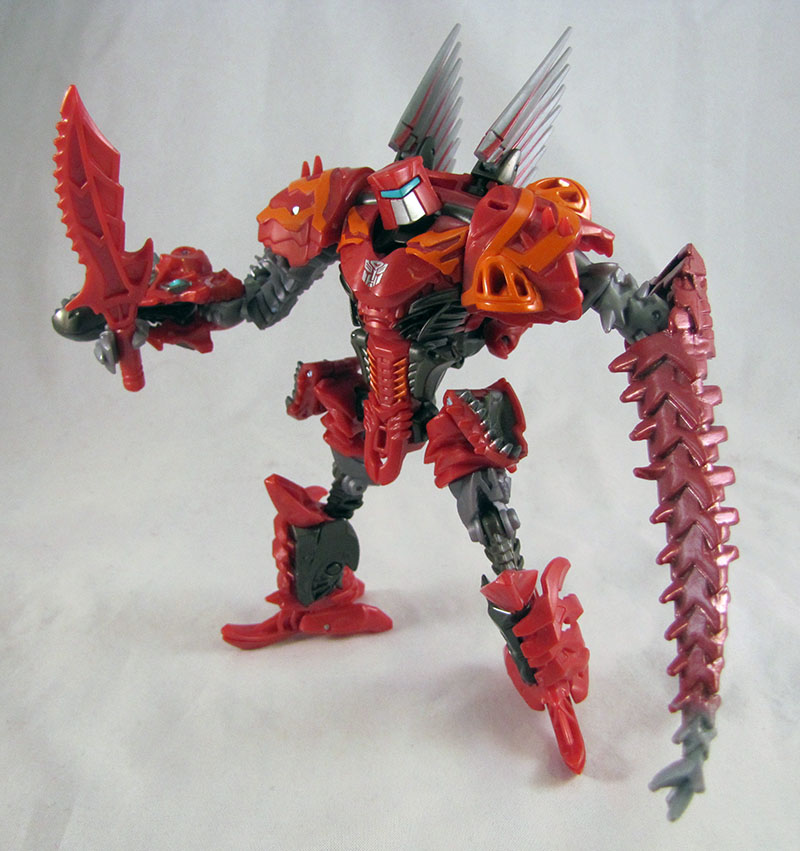 Hasbro reps said at Toy Fair that the Dinobots transform in the movie, but to be honest, Scorn's robot mode doesn't really feel like it.  Other than the vestigial teeth on his hips, he doesn't feel like he's got the fake altmode kibble on him that most movie designs do.  He transforms more like someone designed from the ground up by Hasbro than an ILM design.  You know, kinda Beast Wars traditional-style, with the head hand and the tail hand.  His head is also kind of simple -- all of the non-Grimlock Dinobots have pretty simple helmeted heads, none of which feel particularly movie-y.  But this is a new trilogy with a new artistic direction (everyone else has pretty humanoid faces now rather than being all monstery) so who knows.

All this said, Scorn is pretty awesome.  He's easily the best Dinobot of the three that came out at launch.  He also feels more massive than his wavemate Slug (the Triceratops).  Though they're both roughly the same height in robot mode, Scorn is way larger in beast mode.  He's also got a pretty well-articulated head and neck, with desired joints in the dino legs and shoulders as well.  He's a great spinosaurus.  He's probably the best toy of the first wave. 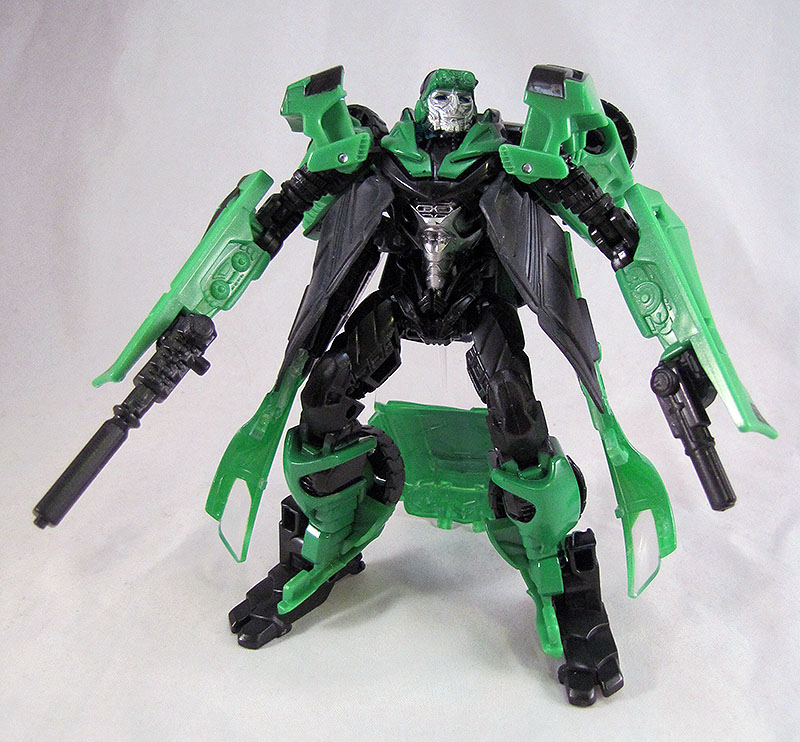 I spent Saturday getting my usual metric buttload of new Transformers toys, as it was the official street date for Age of Extinction stuff to go out.  The Targets didn't have much, and Walmarts weren't much better, but Toys"R"Us at least fulfilled their part of the contract, so I didn't go home empty handed.  Transformers movie toy street dates have kind of diminished over the years.  For the first movie, the street date felt like an actual event that stores cared about.  Everyone put their stuff out immediately and everywhere.  Everyone had their own exclusives out the first day, too.  It was a Thing.  These days, it feels like they're shrugging a little, even though TF movie stuff still outsells the non-movie stuff by a large margin.

I've decided to talk about Crosshairs first, since he was a pleasant surprise.  I mean, of course the Dinobots are gonna be sweet-ass Transformers dinosaur toys, and there's an Optimus and a Bumblebee as per usual, but Crosshairs I actually had pretty low expectations for.  It's probably related to how poorly most folks seem to transform him, Hasbro included.  In a lot of images of him, his shoulders aren't transformed out of car mode, so he's got this giant immobile block of plastic surrounding his torso and head.  But hey, no, that all moves away and into position.  The rear bumper folds back behind the torso and the shoulders lower and separate.  The wheels fold back.  He looks way less like an upscaled Legends Class toy when properly converted. 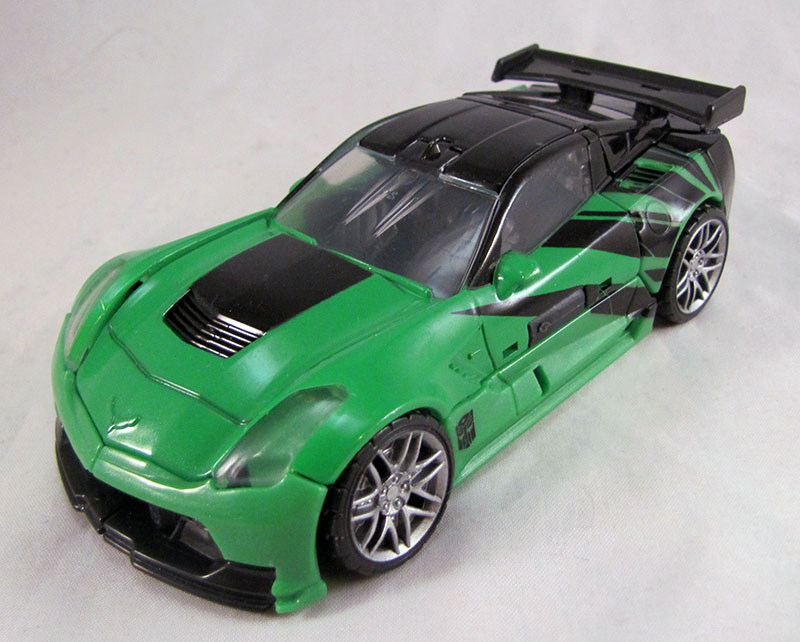 He also has, you know, a trenchcoat.  And goggles, too, but the trenchcoat is a neat motif!  Rubberized parts fold out from inside the car kibble to plug into his ribcage so it looks like a spreading open bit of clothing.  Man, I bet the folks at Hasbro saw concept images of this guy and thanked whoever their respective gods are.  I mean, he's got a kibble coat.  You don't have to engineer most of the car panels into robot parts, you just have to hang them off the back of him and he's accurate.

For this reason, he isn't very hard to get back into car mode.  You just take everything and plug it back in, for the most part.  There is some fiddling, and everything moves, but nothing moves very far. 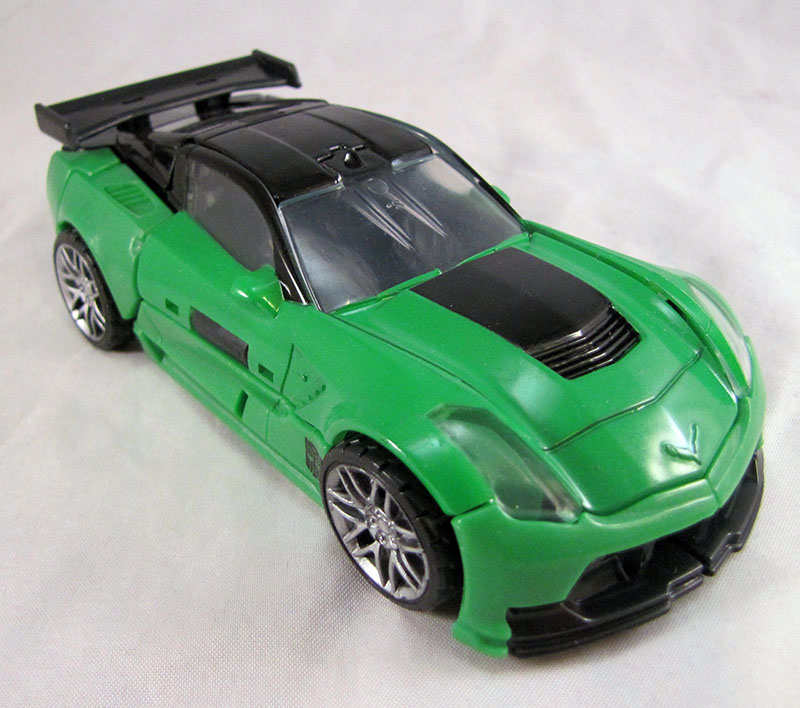 The only weirdness is that only one half of his car mode gets deco.  Is the actual real-life vehicle like this or something?  Because it doesn't really make any sense -- he's packaged in robot mode, so it's not like Hasbro's putting the painted half of the car mode out in front of the package like a bunch of dicks.  It is legitimately boggling.

He comes with three weapons.  He gets two smaller pistols which peg into the insides of his coat and one larger rifle.  In the one clip of him in the trailers, he has two of that larger rifle.  Dangit.   Oh well.

I like him, at any rate.  Doesn't-Realize-Matrix-Trilogy-Isn't-A-Thing-Anymore trenchcoat dude is all right by my book. 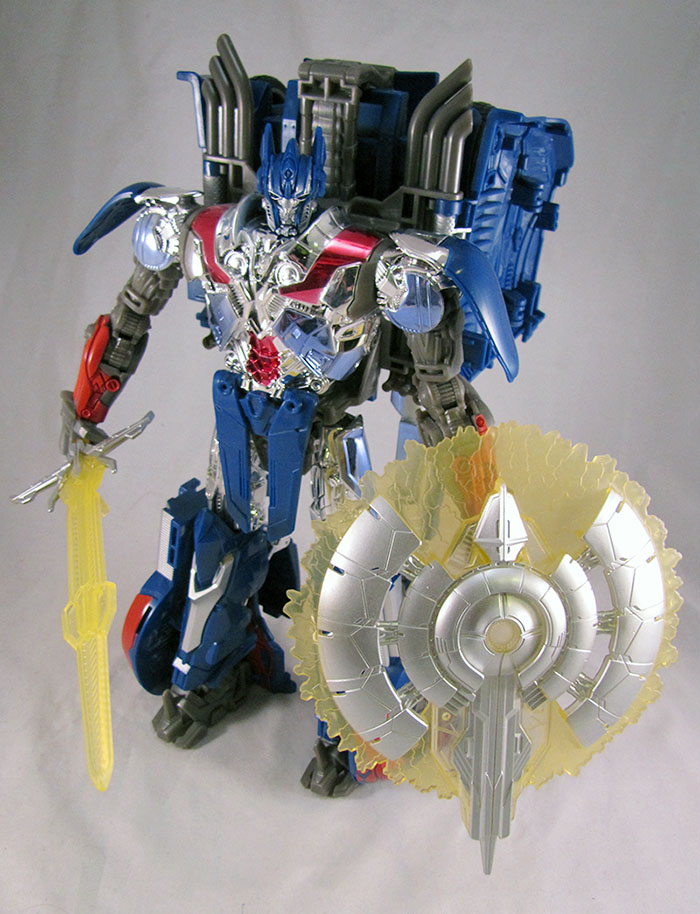 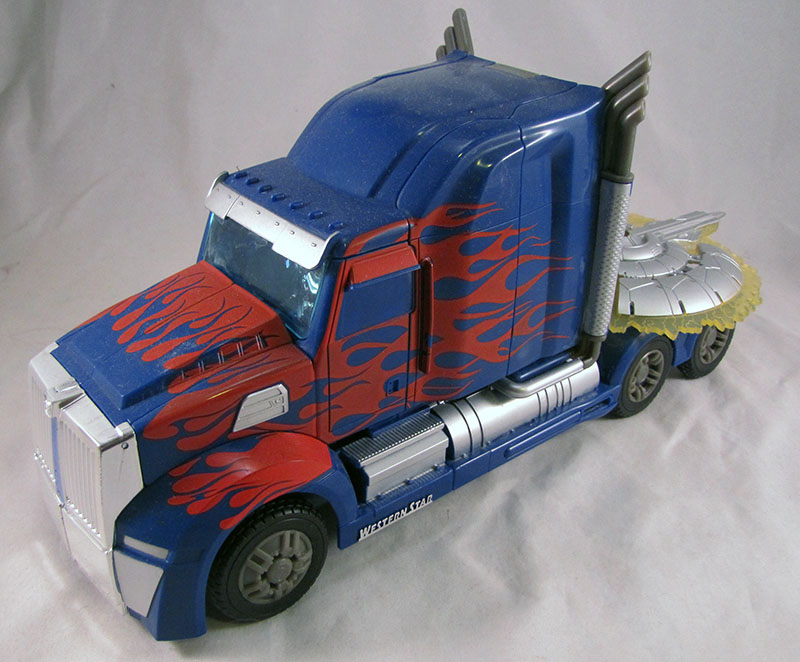 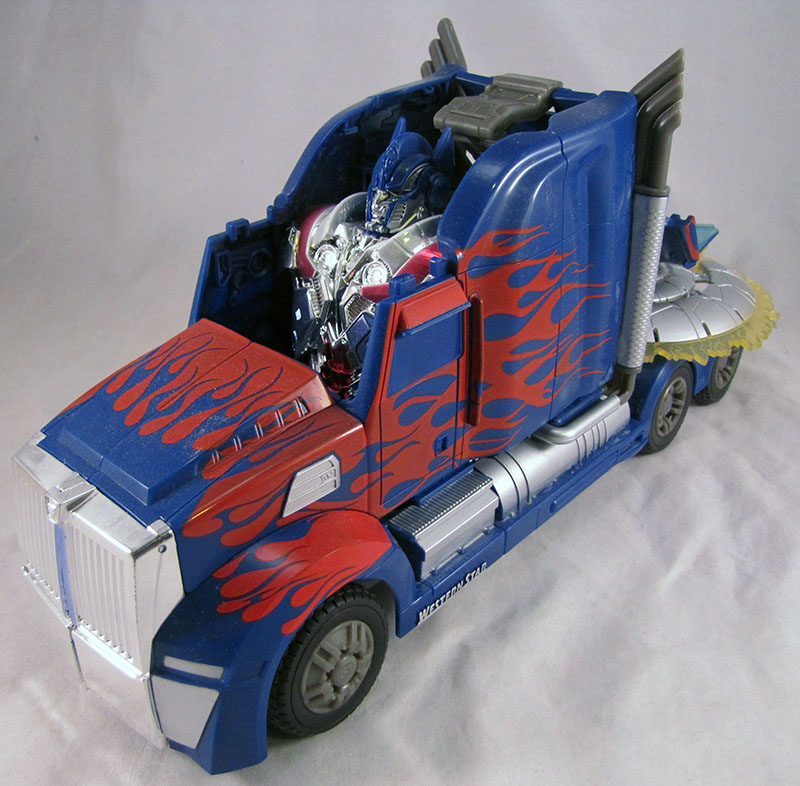