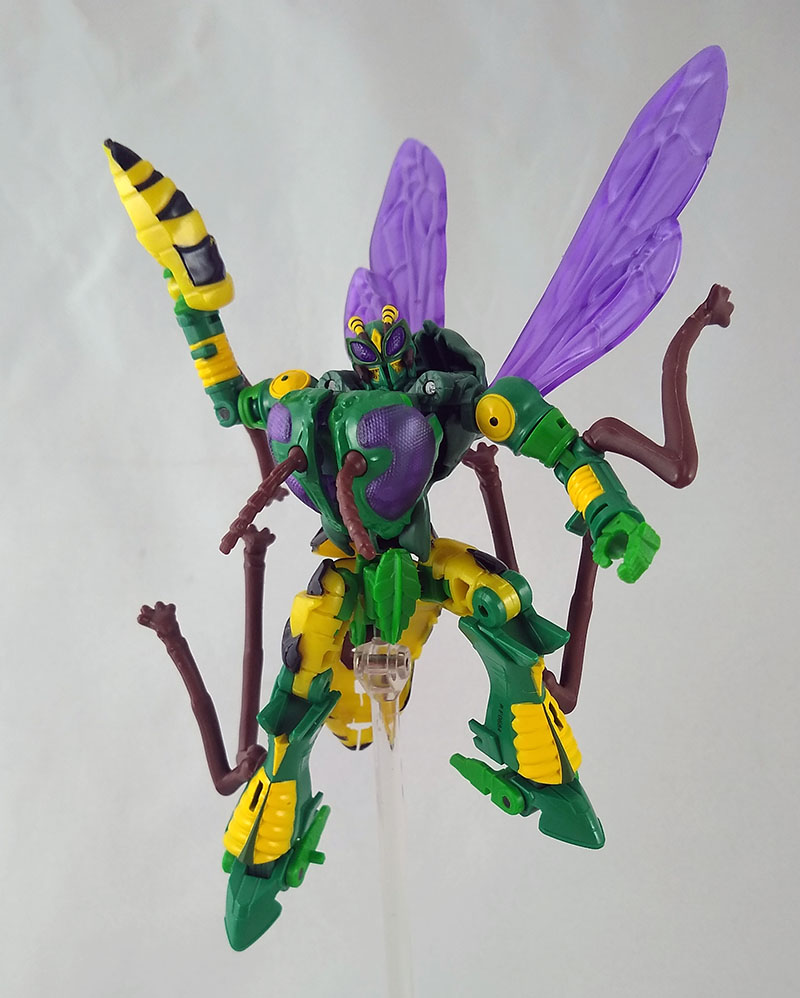 Thrilling 30 Waspinator was pretty good!  A very good Waspinator!  Perfect, even, if you let the foggy haze of "i last touched this thing when I put it on a shelf five years ago" take over your cognition.   And it helps if you bought the expensive Japanese-convention-exclusive version with actual paint on it.  And if you didn't care that its knees couldn't bend more than ten degrees.  Or that its wings couldn't point upwards in robot mode without some fussing, or that his eyes were a glassy spooge color, or that he was weirdly a mechanical wasp of some sort, not organic, or--

Yeah, we're in Transformers' years of diminishing returns, sure.  Taking characters/toys you were pretty pleased with and doing them just a little bit better, just better enough, to realize the older one was GARBAGE actually!  THROW THAT OLDER TOY IN A BIN AND FORGET IT DOWNSTAIRS FOREVER.

That, sure, but also sometimes there's some new things that you like that you hadn't considered, like, hey, what if we sculpt Waspinator's wasp mode after an actual wasp?  It changes the eye shapes on his chest (making him less cartoon accurate), but it's actually pretty neat!  I like that!  And a wasp's stripes on its ass aren't actually a cartoonish set of perfectly horizontal stripes, so what if we shaped them more organically?  That's also neat!  I like that. 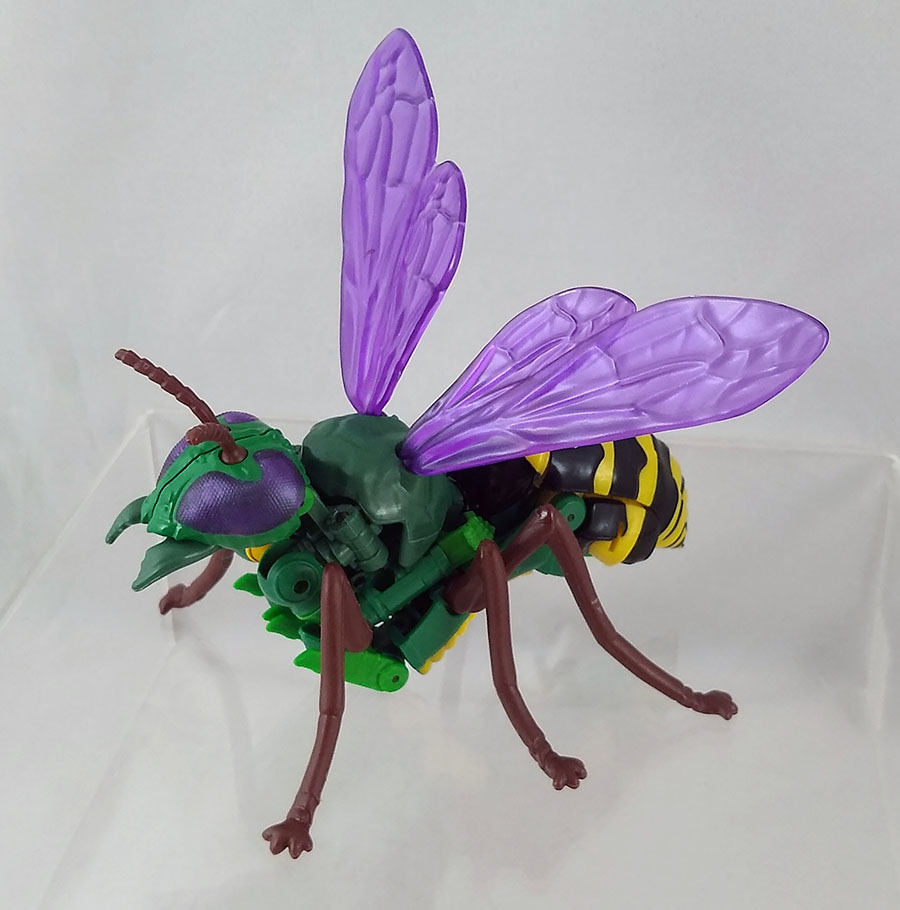 And you know what's GREAT???  Every single Waspinator until now has cast his upper shoulders in nylon plastic because they're always balljoints, and balljoints work better if they have a little texture and sturdiness to them.  So, nylon.  But you can't paint nylon with factory paint, so Waspinator never before could have had the big yellow circles on his shoulders that he did in the cartoon.  But Kingdom Waspinator's shoulders are finally not balljointed!  They're universal joints with regular plastic!  And so at long last, the big yellow shoulder circles.  Phew.

There are some things the original still does better: I miss the flip-out stinger in the singer gun.  New Kingdom Waspy's stinger gun is just the solid yellow piece with the weapon detailing lightly sculpted into the underside.  But that's not a huge deal because I like leaving that weapon stowed so as to keep the striped butt portion intact. 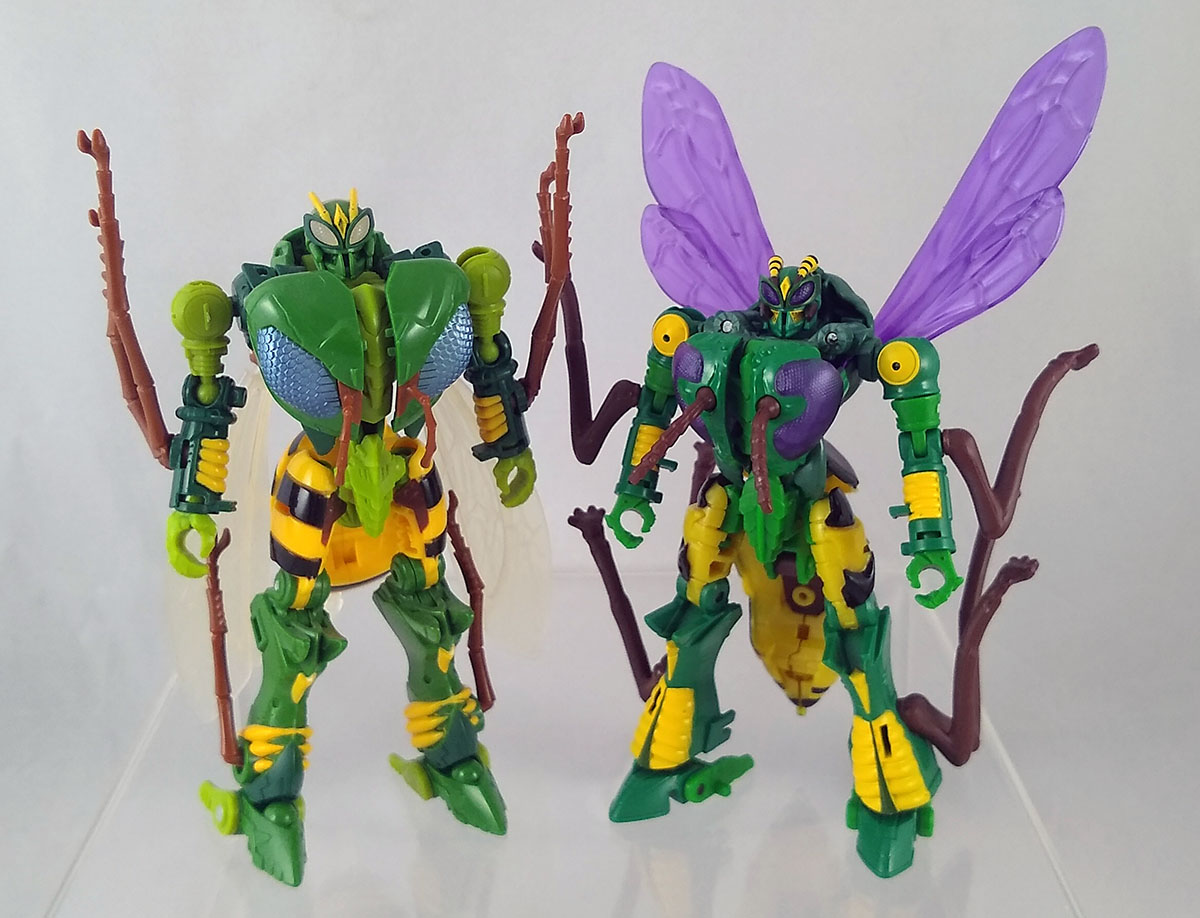 And maybe you'd like him as big as he used to be?  Maybe.  I'm fine with Waspinator being shorter.  He shouldn't be a tall deluxe.  (aka the size all deluxes used to be but now sometimes some of them are shorter for scaling)

Kingdom Waspinator is a good Waspinator!  They actually paint his head!  I mean, I had the fancy Japanese convention one for that reason, but this one cost like a third what that one did, and everyone can buy it not just a few thousand people, so.  That seems nicer.

When does Terrorsaur get here so I can do a Kingdom Predacon groupshot, huh?

(original retail version thrilling 30 waspinator pictured in the comparison photo, not the fancy japanese convention one with paint)