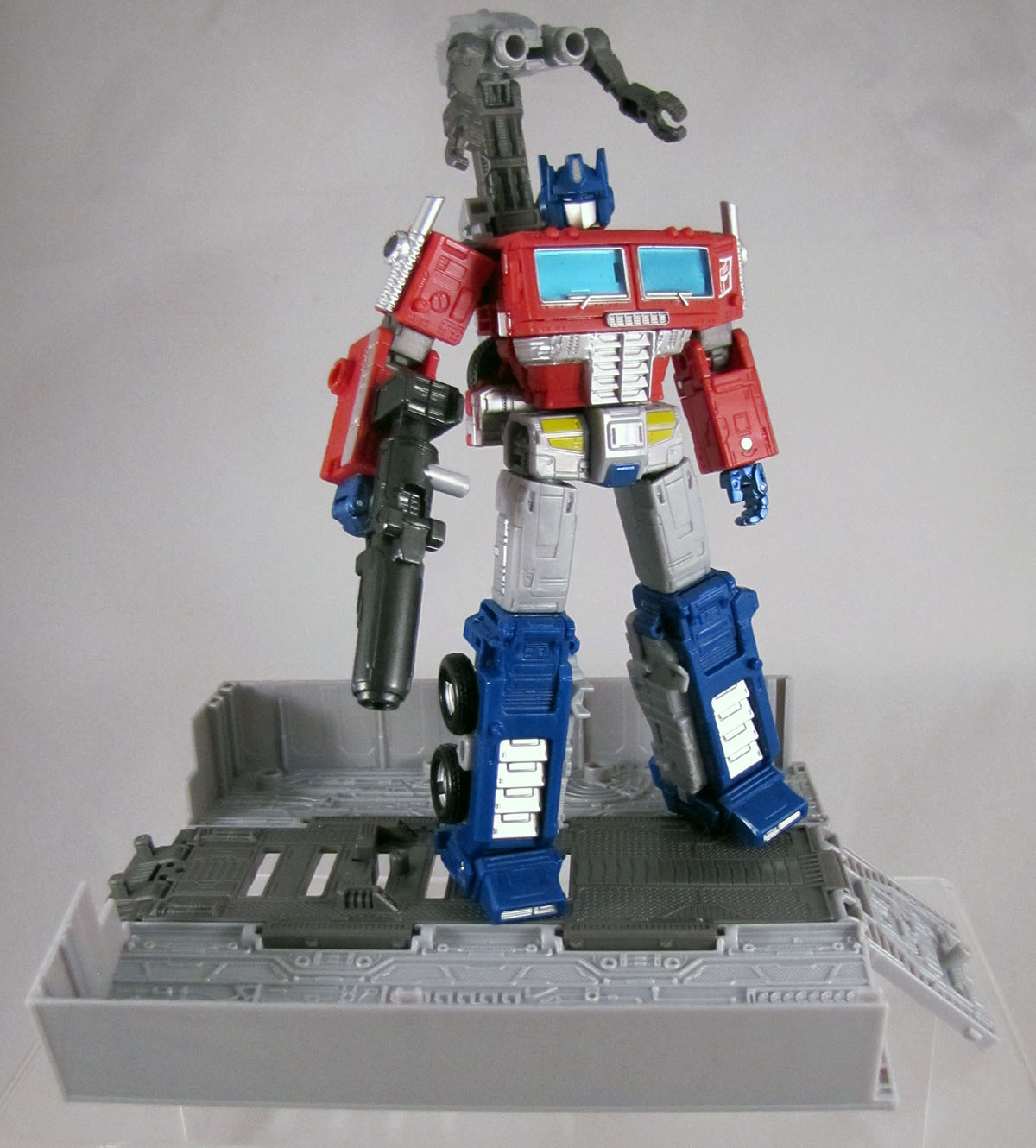 If I recall, I bemoaned Stege Optimus Prime for being a uncanny valley Earth Truck, so very close that it looked like an Earth truck wearing some extra parts stapled on it.  Well, here's the truck underneath those parts!  It's what you wanted really all along, after we sold you the other one that tried to be this but not really!  Stege was ""not"" Earth truck, and EarthRise Optimus Prime is just Earth truck.

I mean, it's an Optimus Prime, whaddya want.  A trailer?  It's here!  It even splits open and there's Command Deck inside.  Roller?  It's... not here.  Well, there's plenty of other Rollers.  But this is your Trying To Be The Cartoon G1 Optimus Prime With An Actual Trailer, At Retail.

And to be honest...?  Heck, I think I preferred the Cybertronian-style one.  I miss the way the front wheels folded up into the ribcage.  I miss it having... I dunno, what small amount of stylization it had.  Yeah, it was an Earth truck wearing goggles, but turns out the goggles were the interesting part. 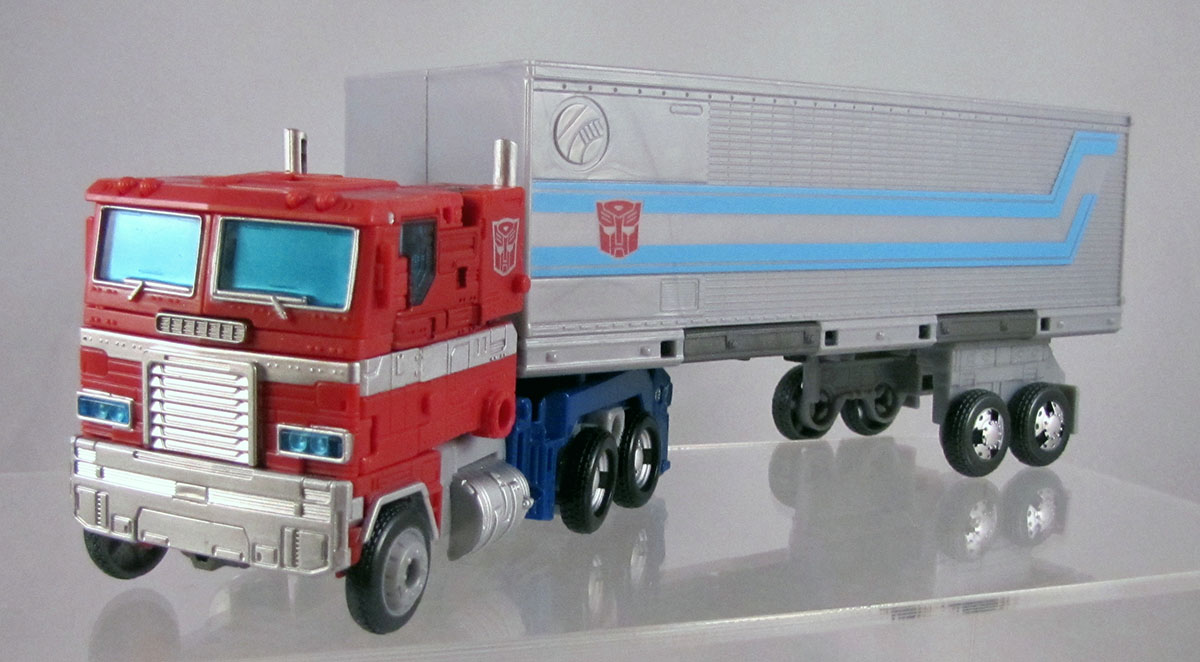 I mean, this isn't a bad toy.  It's actually quite good!  It has some new ways to get Cartoon Optimus out of a box.  I like how it wads its truck stuff up inside its shirt.  I do actually like the trailer -- it's largely why I bothered with it.  My kids are... VERY into trucks with trailers and also connecting all my Transformer base stuff together.  The middle section of the trailer door slides out and becomes a shield, AND it has hinged edges that connects to all the road pieces from the rest of the line (plus Stege's Omega Supreme).  If I skipped this Optimus Prime toy that has a trailer with base-connecting capability, I'd be a monster.

I did have to fix his eyes, though.  They were blue, which... well, his face is also blue, so they kind of disappear.  I opened up his noggin and painted his eyes gold.  That's one major thing I like about current Transformers toys, the part where the eyes are sculpted into the back of the head but poke out through the front, likely to make painting them easier for the factories.  Well, it makes it easier for me, too!  Huzzah.  Those gold eyes pop, now. 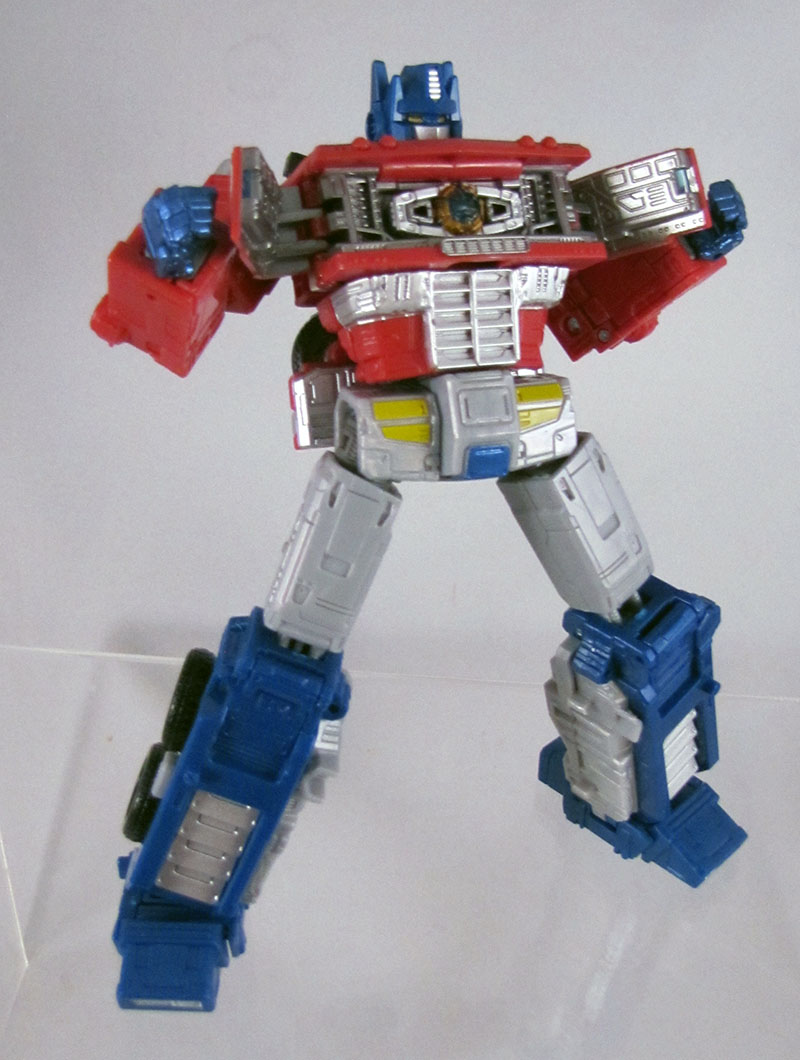 EarthRise Optimus Prime also comes with an ion cannon (his rifle) that folds in half and can store anywhere there's a 5mm peghole.  (There are lots.)  And there's a Matrix of Leadership inside his chest which can be removed.  Technically this is why his hands are sculpted to open, but he's not great at holding it.  Kind of have to wedge either end around his thumbs and pray.  But!  If you flip around the Matrix, there's a 5mm port there, which means you can shove effects parts into there if you want to have him do Matrix Blasts or whatever Optimus Prime is up to these days.  Or just have the Matrix zoom through the sky like Nyan Cat.

One of my favorite oddities with EarthRise Optimus Prime is that he's partially made from actual Stege Optimus Prime parts, especially his legs.  But they gutted his legs, put some new stuff in there, and they don't flip around to transform anymore, and so you have this extra, vestigial 5mm trailer hitch peghole split across the outsides of his shins, with a new 5mm peg added to the insides of his new legs.  It's wild.

I'm not sure any of you followed that.  I barely understood myself reading it.