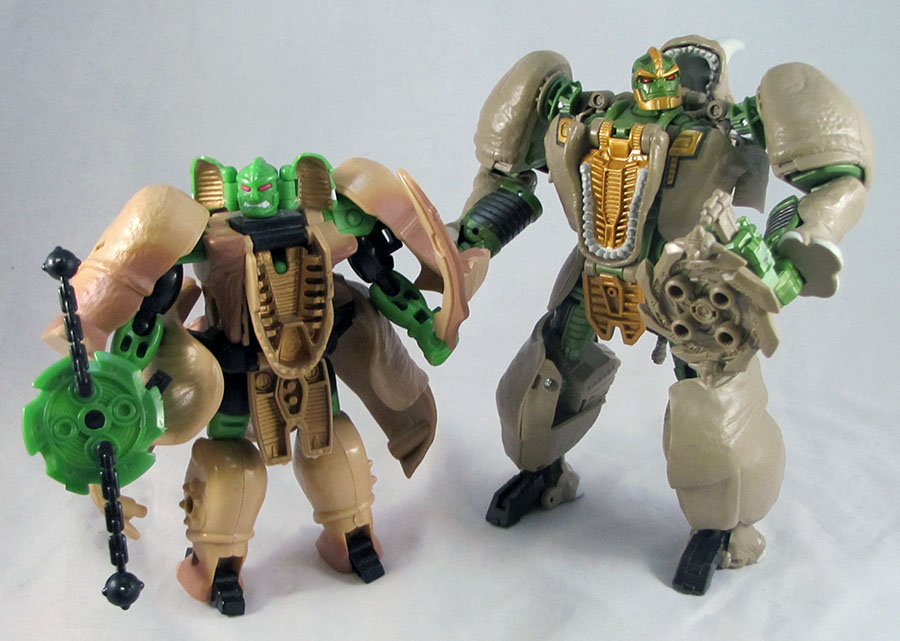 If I had a time machine, I would probably use it to go back to like 1999 or so and tell myself that this toy would exist.  Look, little dude, you don't have to pull all the parts off your Rhinox and sculpey yourself a more show-accurate one.  Just... wait a while.  You'll lose that thing anyway.

Also in a few years you're going to stop believing the Earth is 6000 years old, so why not cut that shit out earlier.  You'll be free.  Let it go.  Let it go.  Turn away and slam the door!

The original Rhinox toy was designed to be kinda like a samurai guy.  He's got his samurai skirt and he gets a sword and a mace weapon and his mutant face splits out and kinda looks like the sides of a samurai helmet.  The cartoon model was all "hell naw" and removed a bunch of that and ignored his sword and just made him this huge unstoppable bruiser who's also super-smart and really good at being a leader and settling disputes and... okay, Rhinox was kind of on the edge of being annoyingly perfect.  But he was humble and kind of a homebody, so that kept that from happening.  Rhinox was never "i have to go now my home planet needs me," and other folks mostly ignored that he was clearly the most awesomely competent dude in that show. 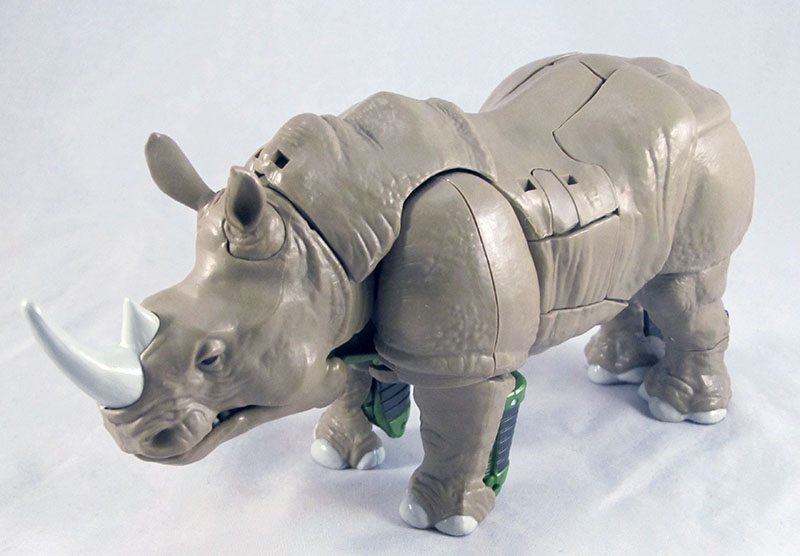 The original Rhinox toy was also a mess.  God dang.  Everything hangs everywhere.  He transformed from rhinoceros to a Christmas tree, I'm pretty sure.  Just cascading panels everywhere.  Thank goodness the newer, bigger Rhinox toy emulates the cleaner look of the television show.  The back end of the rhinoceros does split into quite a few parts, but they all compact neatly around him and usually lock down.  A hanging crotch skirt piece remains as the single remaining callback to his original samurai look.  (You can fold it up under his jaw-chest if you want to erase that motif completely.)

In rhino mode, he's a very satisfying rhino, if immobile.  His butt and tail and horns and ears are all made of soft plastic.  There are no gimmicks in this mode.  He will look pretty and that is basically it.  Don't even open his jaw.  It's not supposed to be opened.  The jaw is for transformation and there's rows of very very not-rhinoceros-like sharp teeth in there for robot mode and the whole thing is hinged too far back in the jaw anyway to look good.  Don't do it!  Enjoy your static rhinoceros, dammit. 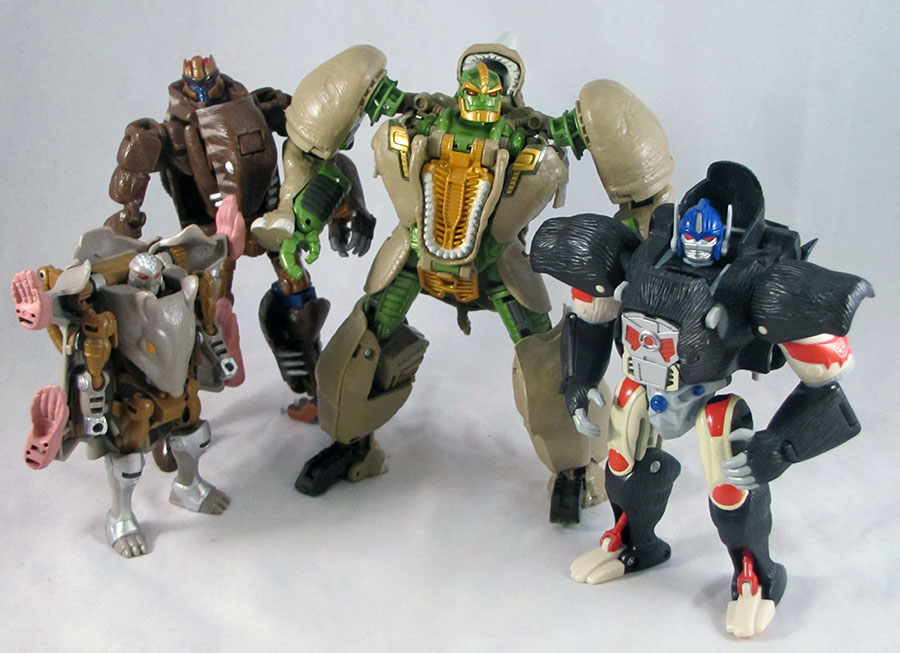 In robot mode, Rhinox has the articulation you expect, though I'm appreciative that his balljointed neck allows him to look up, which facilitates some nice chaingun of doom poses.  Speaking of which, he comes with two of those, as is Proper.  As with the original (single) weapon, pump the lever and the chain spins.  As not with the original, it's an actual chaingun thing, and not a weird rotating mace sawblade thing.  If you don't want your Rhinox to be encumbered with his weapons, you can shove the 5mm handles into the deep screwholes in the backs of his shoulders.  We always wondered where Rhinox was reaching when he'd grab behind himself and pull these outta seemingly nowhere, and now we know. 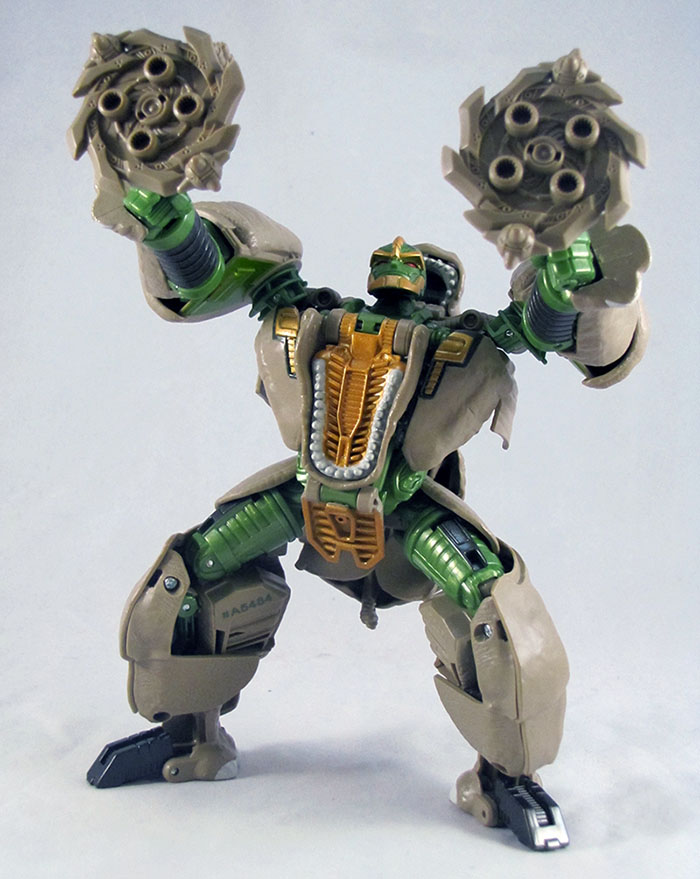 Rhinox is packaged mistransformed so that his torso is elongated.  Properly transformed, his crotch compacts deeper into his torso.  He's depicted this incorrect way on the packaging as well.  But done correctly, he's rightly stout.

Two things I don't like about him:  1) His legs are a little loose!  Sometimes he's hard to stand.  2) I wish they'd kept his lips.  This new toy's mouth is more of a simple sculpted line.  Not only can't he be a samurai anymore, but he can't be a black dude, either (who is voiced by a white dude).  Stop this cultural erasure, Hasbro!

you totally need to buy him, for reals