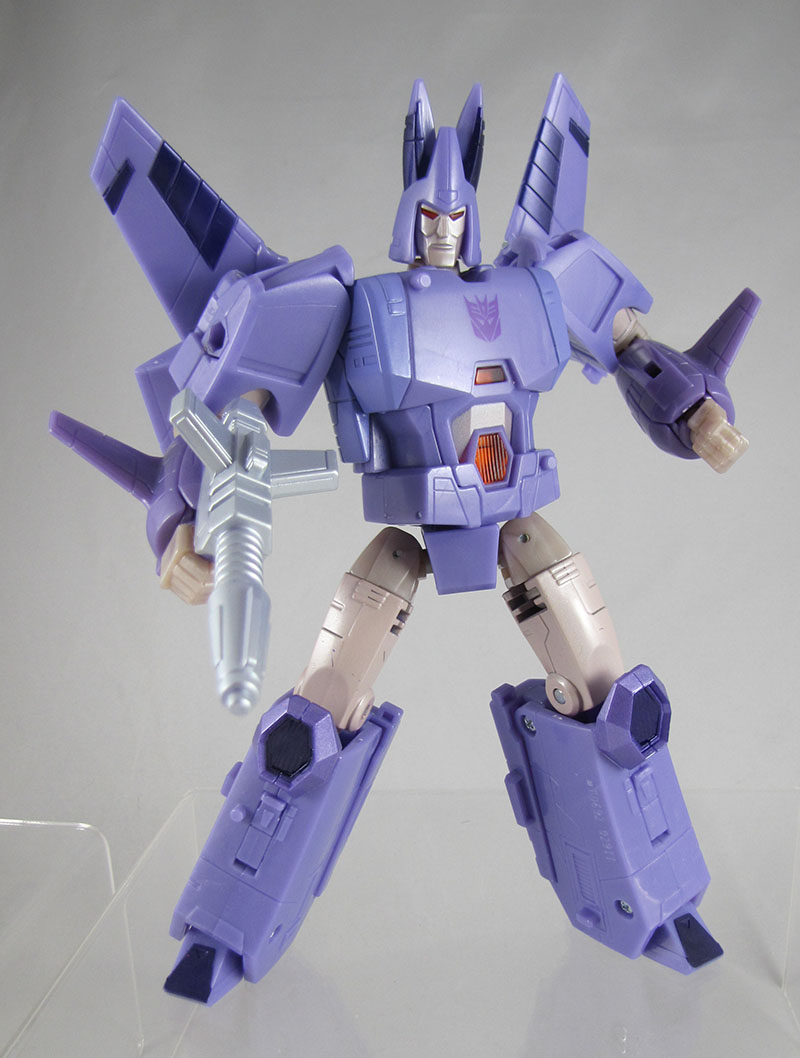 If there's anything we know about Transformer toys since Studio Series and War for Cybertron started, it's that robot height in animation is king.  Pull out those scale charts!  We're adherin' to them no matter what, unless you're Rattrap!  Did you think some characters were the same height?  Well, they weren't!  Were they actually always drawn the same height except for one two-second scene where one of them was taller?  Well, guess what?  That was actually the one time somebody paid attention the scale chart!  And that's what we're copyin'!

So, hey, Kingdom Cyclonus.  You're tall.  We know we're getting a Galvatron from this line, and we haven't seen him yet and we don't know how big he is, but I wouldn't be surprised if Galvatron were shorter than this Cyclonus.  It'd match the scale chart.  Because Cyclonus is a big boy.  Galvatron pilots him in jet mode!  Ultra Magnus is his most common opponent in the cartoon!  He's just large.

And, yeah, usually he's just drawn the same size as his often-partner Scourge, who's just Starscream-sized.  But on scale charts (and when he's countering Ultra Magnus) he's huge. 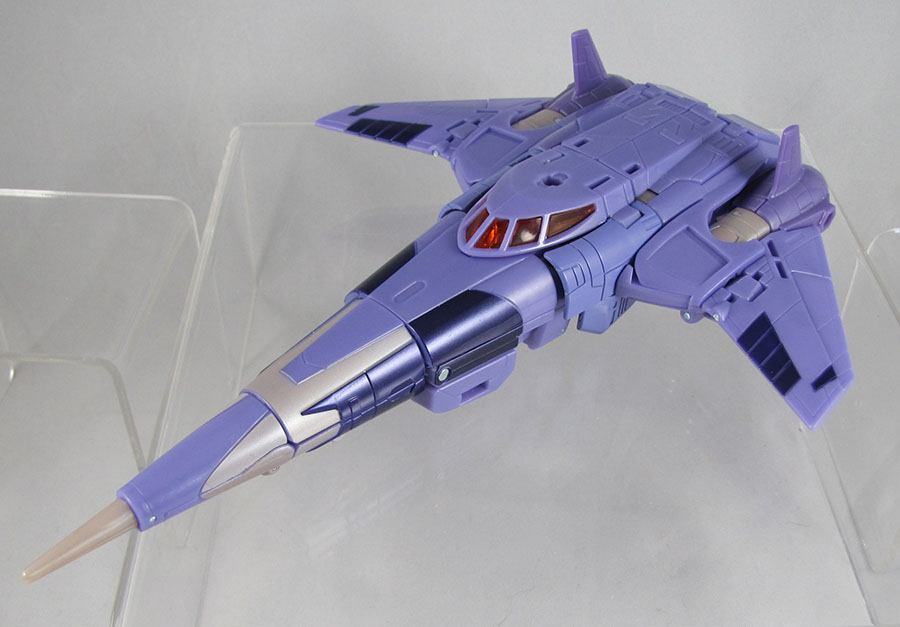 Guess Bombshell had a glo-up.

Since Kingdom Cyclonus is basically just a large version of the animation model sheet, his toy kind of feels like an oversized knockoff in your hands.  As if your eyes are cheating you.  It should be smaller!  But it is not.  And someone scaled it up, and there was no increase in sculpting detail, and it's just... large.  That, and also there's a budget spectrum for toys with one end labeled "SIZE" and the other "COMPLEXITY" and Cyclonus is at the SIZE end.  He's big, and so he will have less going on.  Remember how I mentioned that his wavemate Optimus Primal is relatively tiny and has a lot of flip-out stuff?  Same deal, but opposite. 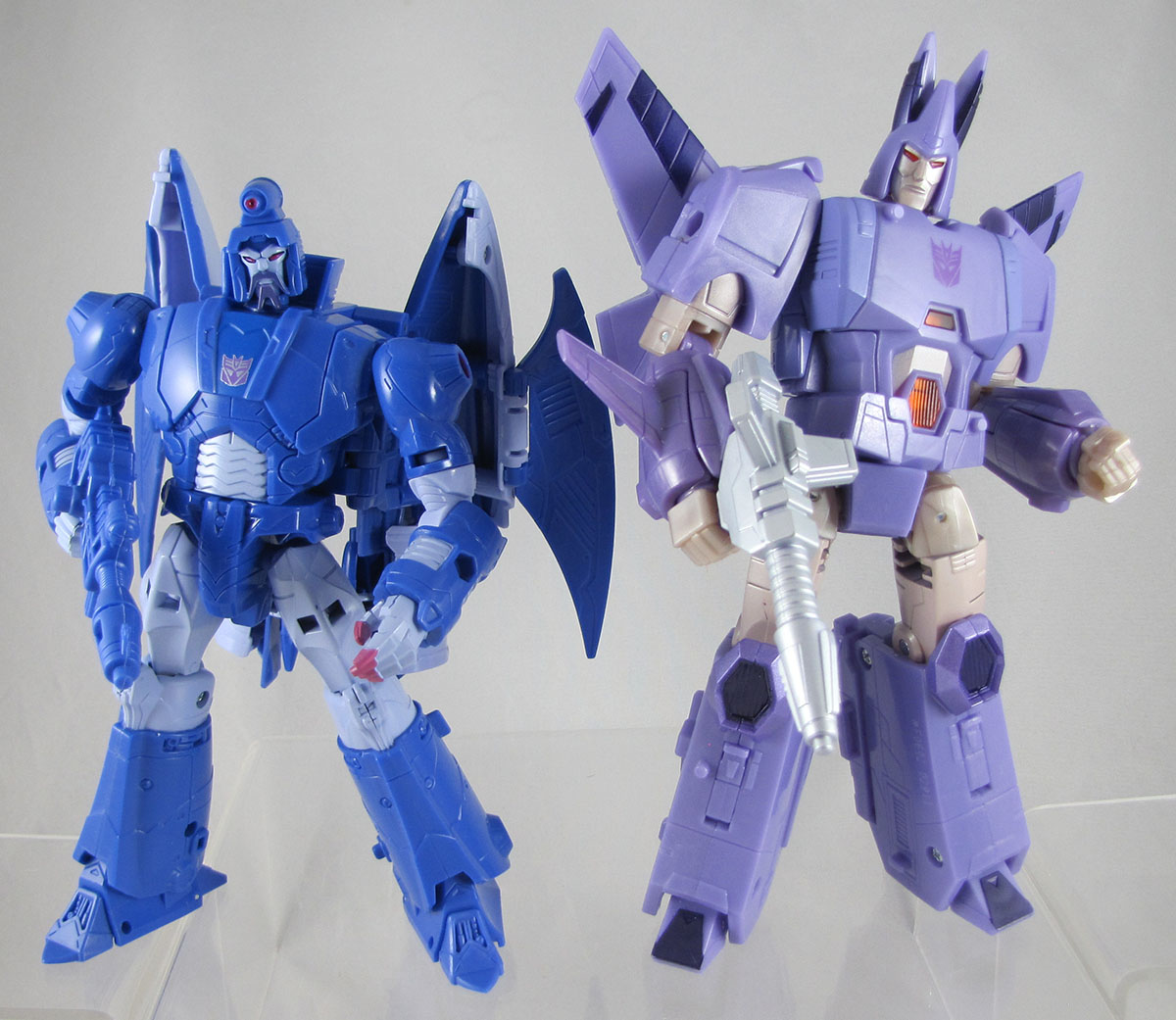 Also remember how I mentioned I scraped the paint off of one of Optimus Primal's thighs?  Well, my Cyclonus came with tiny little paint scrapes on his thighs.  (It's purple plastic under there.)  And the transformation involves.... shoving those surfaces just barely past the insides of his shins.  I have not yet actually scraped any paint off myself, but Optimus Primal gave me a complex.  This part of Cyclonus's transformation is not fun.

The fun part of his transformation is telescoping like three or four layers of nosecone out of his torso.  He's a nesting doll in there.

One thing I've noticed is that the panels that fold down on either side of the cockpit in jet mode don't... actually rest snug where they should?  They just kind of flare out a bit?  I checked images of other folks' Cyclonuses, and all others seem to have the same issue, and the official renders seem to suggest it's supposed to cling snugly instead.  I dunno.

It's a big Cyclonus!