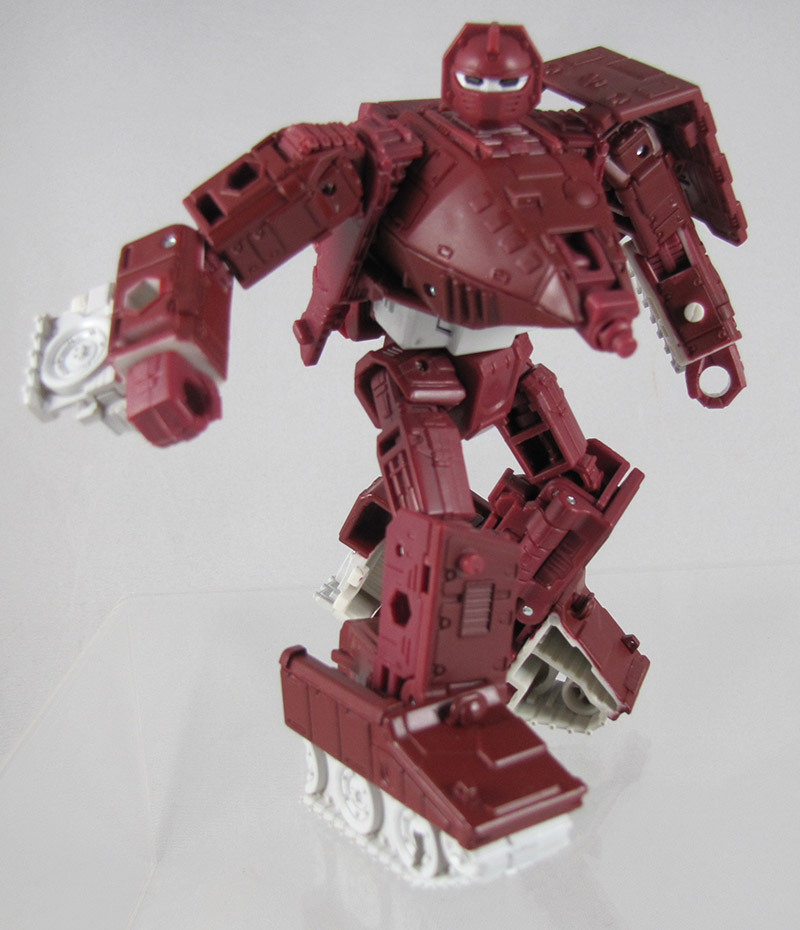 The best review of Kingdom Warpath is probably a comparison to the last Deluxe Class toy they made of him, back in 2011.  That decade ago, Transformers was still doing "updates" of characters rather than trying to recreate what they looked like in media like they do today.  And 2011 Generations Warpath was.... hardcore?  Like, they tried to make him look cool, but in the same way that Azrael Batman looks cooler than regular Batman.  He was the gritty 90s update-with-pouches to Warpath, while Kingdom Warpath is regular ol' Bruce Wayne.

So, yeah, Kingdom Warpath isn't a Warpath that's trying to look kewl?  He's adorable.  And, to be frank, that is an important aspect of Warpath.  Sure, he transforms into a tank, but he's a friendly guy with a childish speech quirk of shouting onomatopoeia.  He shouldn't look like he's here for a new #1 and a few months of "THINGS WILL NEVER BE THE SAME" shock value before they bring back Classic Warpath with restored issue numbering. 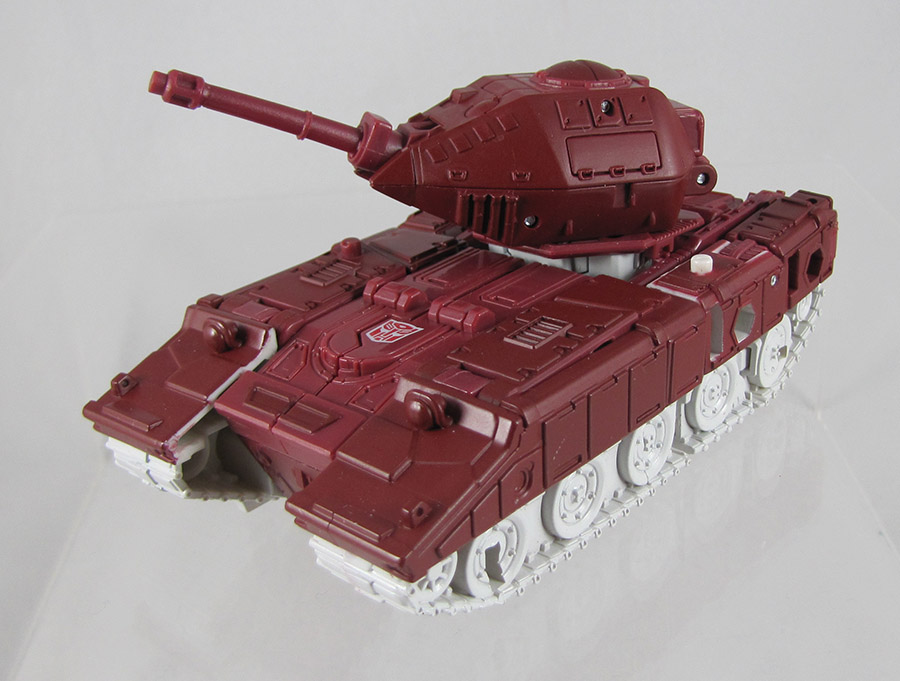 The War for Cybertron Trilogy toys (Stege, Earthrise, and now Kingdom) try to make toys in scale with each other in robot mode, so Kingdom Warpath is a little shorter than most Deluxes.  He's not nearly as short as Cliffjumper/Bumblebee/Hubcap/BugBite, but he's a bit shorter than Sideswipe and the other Autobot cars.  He's a Mini-Vehicle, but he's a tank so he's not THAT mini of a vehicle.

His legs are a mass of layers of plastic that transforms in a series of flips in order to get him from Tank Front to Cartoon Legs, and it feels tedious at first but has an easy learning curve.  Transforming him from the waist up is pretty easy.  There's a chunk of the underside of the tank that pops off to form a shield.  You can't really see this chunk in vehicle mode, as it forms, again, the underside of the tank.  But it does help hold the front of the tank together (two tabs on the shield grip the two legs together), so it's still necessary and you can't just throw it away because you hate vehicle chunks becoming accessories. 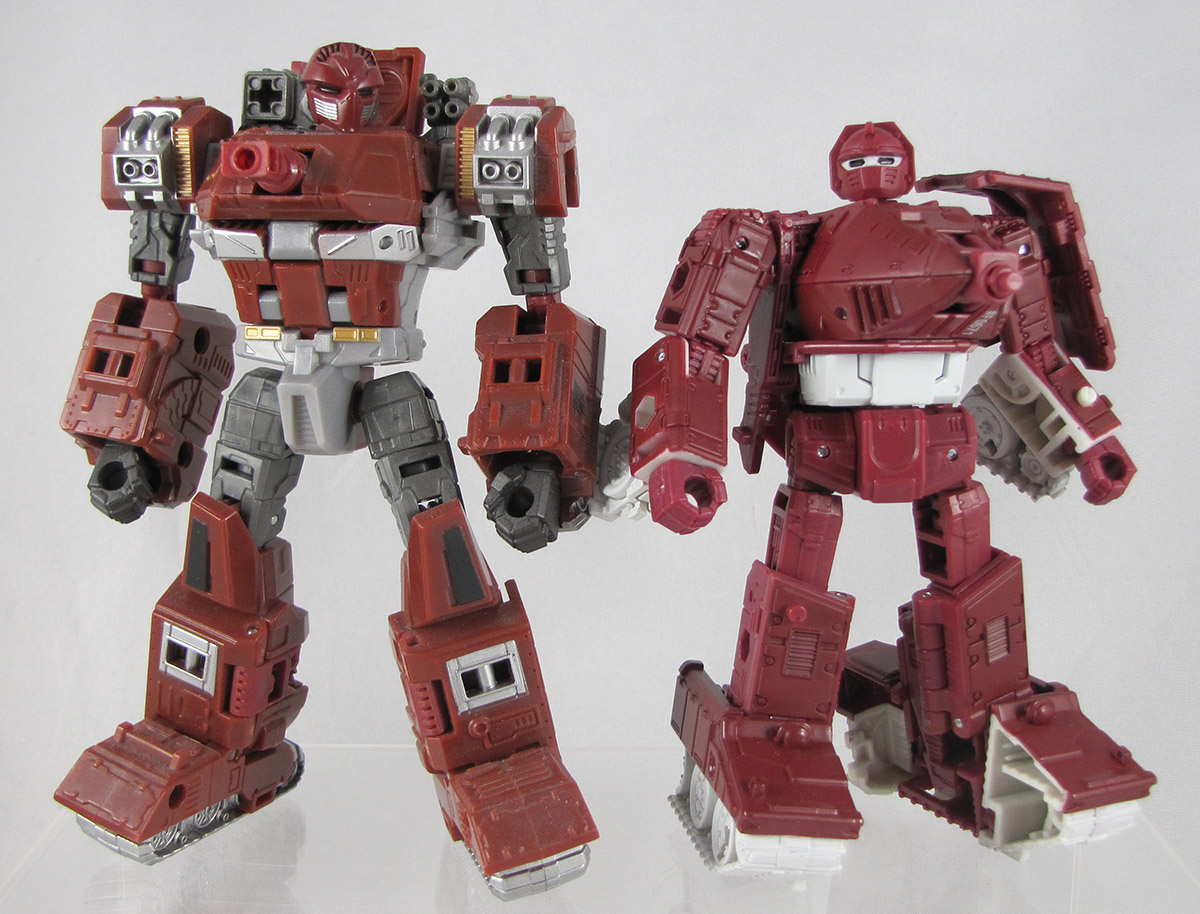 His forearms are offwhite plastic painted red, and the red paint doesn't quite reach the corners of the arms, and so it's pretty obvious they're painted from a glance.  Guess they couldn't fit the forearms on any of the tooling that housed red plastic parts.

The tank mode does basically everything you'd want it to.  It looks like an Earth tank, the turret rotates, and the barrel raises.

Leave the treads on his forearms unfolded if you want a more cartoon/comic-accurate look.

Deluxe Warpath here is kind of like a weird footnote in my brain.  He was so barely on my radar I still don't really register him existing, despite having gotten him in the mail 36 hours ago.  I suppose my anticipation factor for him was pretty low.  He's just Warpath!  I got a new toy of him in the last batch of Generation 1 retreads.  And, well, he's just Warpath.

He punctuates his speech with "POW!" and "KABLAMEE!"  That's his entire personality, right there.

So,  yeah, it's a Warpath.  He looks a lot like Warpath!  He still has the turret chest with the barrel poking out and the treads on his arms and feet.  He's dark red and silver.  He's Warpath!  This version did borrow the trick from the previous Warpath, the Legends Class toy, with the collapsing tank barrel.  It pushes into his chest in robot mode, and it's engineered that so when it's extended in tank mode, it can articulate up at an angle.

People seem to dislike Warpath not being a real tank.  He's an "H-tank," which means he's a tank that doesn't look like a rectangle from the top, but instead a smaller rectangle with four "legs," each housing a set of treads.  On this matter I don't really care.  H-tanks are a staple of Transformers by now, and while some dislike them, I tolerate them if only for the variety they bring to tank alternate modes.  Hell, I got Rumble and Frenzy just last week, and they were also tanks.  I'm happy that Warpath's tank mode has a different silhouette.  It also allows a better visual upgrade to his original form, with the treads on both his arms and feet.  I dislike when Transformer toys break treads cleanly in half during transformation, so splitting the treads up into smaller, self-contained chunks to begin with avoids this.

In tank mode, in addition to the barrel articulation, his turret can also rotate.  This is a feature I'm always happy to see in Transformer tanks, and usually it requires the turret to stay on the robot mode's back, unintegrated into the rest of its robot mode form.  Not Warpath!  It turns, plus it manages to fold down into and become the robot mode torso.  There's also a spring-loaded missile launcher on his right shoulder.  This is notable because spring-loaded weaponry seems to have been kinda slowly budgeted-out of Deluxe Class toys in recent years as prices remain the roughly the same and production costs continue to skyrocket.

I was disappointed to learn that the missile launcher and the non-functioning weapon on his other shoulder weren't "c joint" snap-on accessories.  They really look like they should be!  But at least Warpath has places on his arms and legs that you can snap other guy's "c joint" accessories onto him.

His color scheme's a little boring.  I mean, yeah, it's exactly like the original Warpath's, but I kind of wish he had a brighter accent color somewhere.  He does have bits of gold, but it's hard to distinguish those parts from the silver, since it's a very desaturated gold.  As a nod to his sole personality trait, as I mentioned above, tampographed on either side of his tank mode are "K4-90W" and "Z0W-333."

I sound kind of down on the toy, but I'm really not, over all.  He looks great in robot mode and I enjoy his big treaded stompy feet.  The fun of a robot mode is a very important attribute that can help me overlook minor disappointments elsewhere.  He's a much better Warpath than the one I already had, but I think I would have preferred a toy of a guy I didn't already have as Generations' last hurrah.

Speaking of which, the head in Warpath's instructions belongs to Hardhead.  Guess what old toy they'll be  wanting me to replace now!
Tags: generations, warpath
View/Post Comments
Page 1