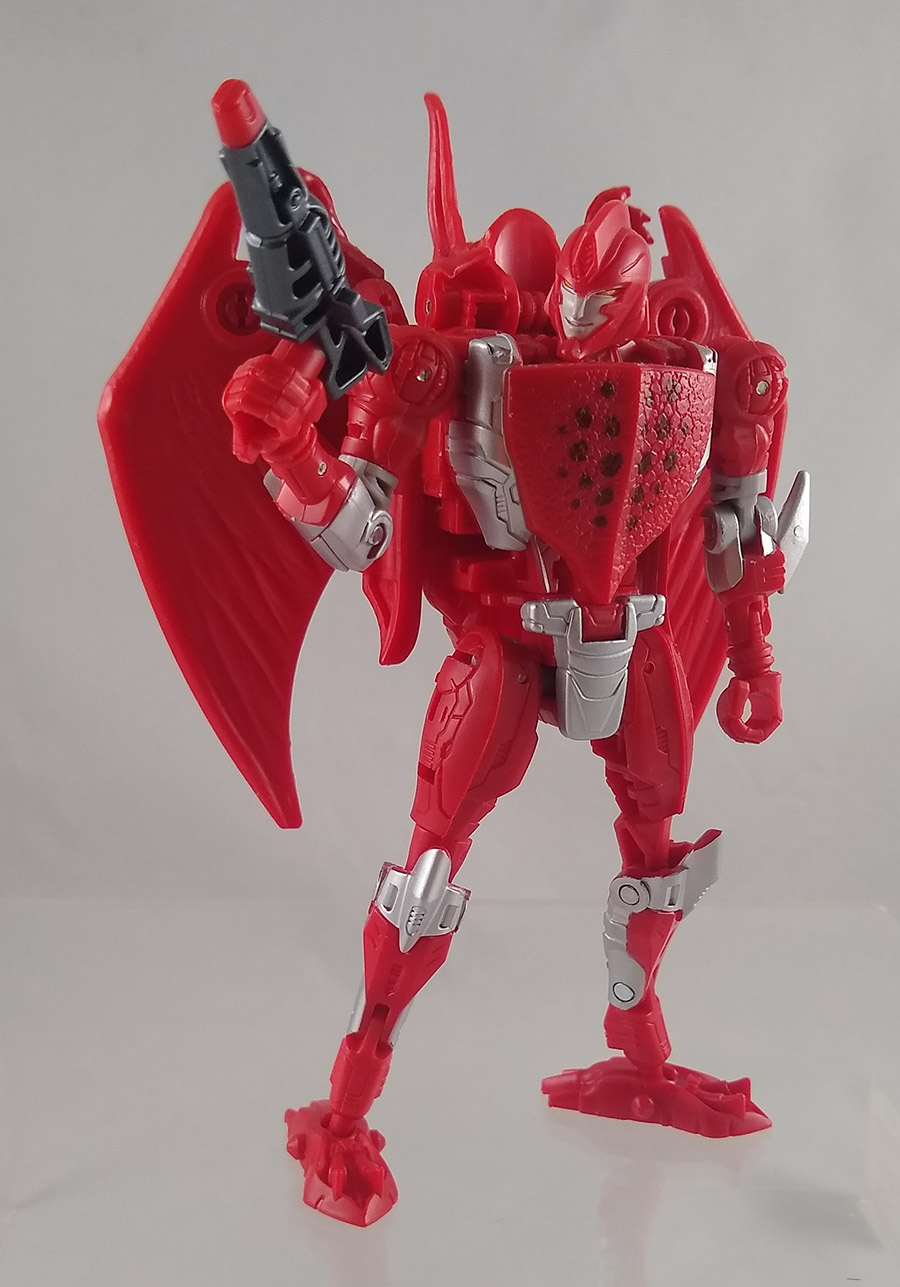 While Transformers: Generations: War for Cybertron Trilogy: Kingdom dumped all the first season Maximals on us at retail, it was relatively light on first season Predacons!  I mean, this makes some sense.  Maximals are good guys and sell better, and they have folks like gorillas and cats and whatnot, while Predacons have two spiders and a fire ant they couldn't even sell the first time.  And so we got Megatron and Blackarachnia and Waspinator and Scorponok (and Dinobot labeled as Predacon on his packaging), but no Terrorsaur, Tarantulas, or Inferno.  Whispers tell us Tarantulas and Inferno are due in this year's (and next year's, because of covid??) Legacy toyline, while Terrorsaur is a last-minute addition to the Kingdom toyline as it goes right out the door. 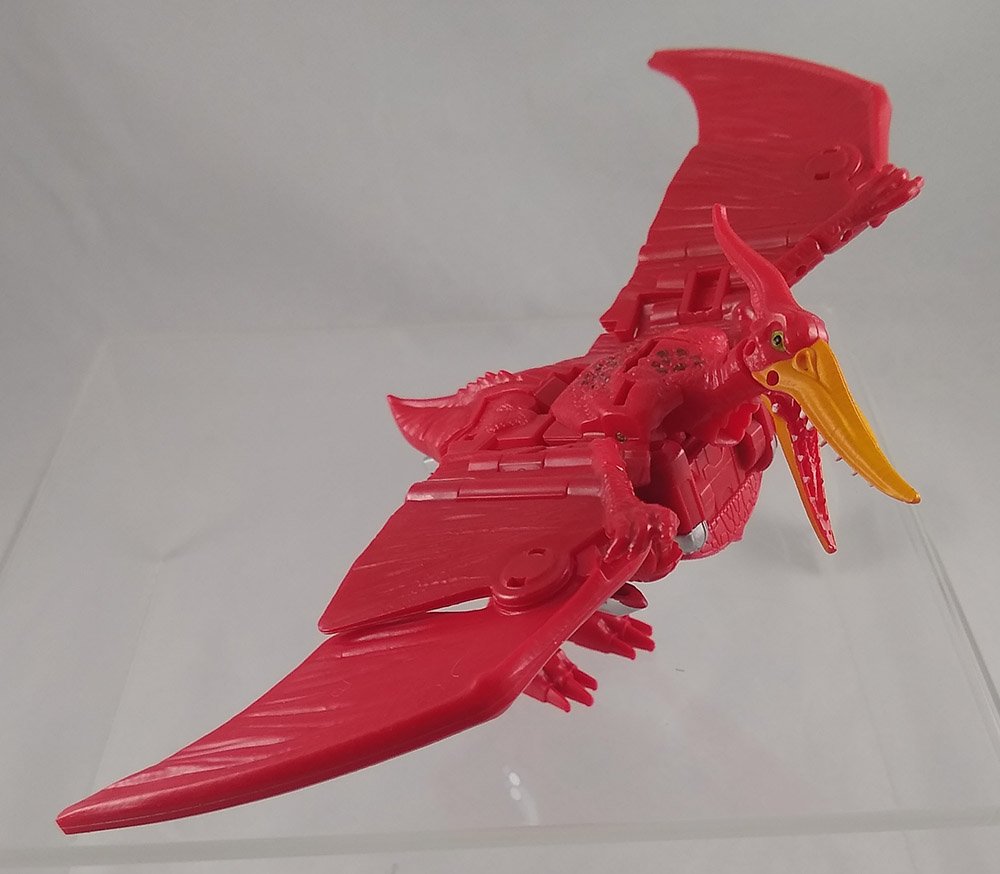 He's a heavily retooled Kingdom Airazor, and mostly that means we get a pterosaur that perches like a bird.  Pterosaurs weren't dinosaurs, and thus weren't ever party to that whole bird arrangement, and so while part of me is like YAYYY TERRORSAUR another part of me is like HRMPH NOT BIRD.   But it's not like Terrorsaur ever transformed into a good, organic pterosaur anyway, I guess.

At least Airazor is a pretty good toy to be retooled from, right?  Nearly all of Airazor is replaced with new Terrorsaur parts, other than a few robot parts and internal engineering bits, and so the two look completely different at a glance, albeit having similar silhouettes.   The original Terrorsaur transformed backwards from Airazor, with the beast head going on the back and the tail going on the chest, rather than vice versa, and so to bridge that gap, Kingdom Terrorsaur has a fake pterosaur butt on his chest.  The beat head folds back over his robot head and joins the real pterosaur butt on his back. 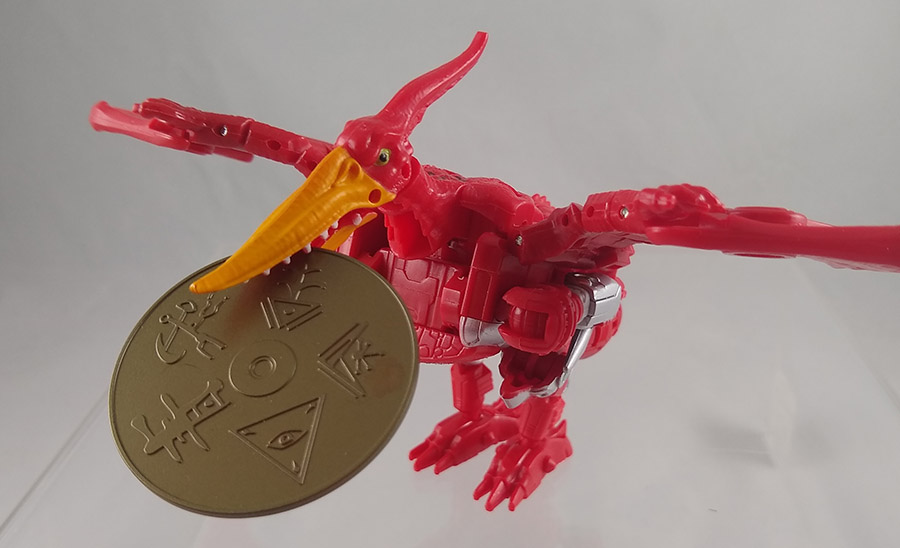 In addition to the Wrong Golden Disc, Terrorsaur comes with three other accessories.  First, his rifle.  And second, two forearm spikes that come in a wadded up tissue paper baggie on the back of the card.  Don't miss that and throw it away.  The forearm spikes can stay plugged in during both modes, unlike Airazor's big forearm weapons.  So that's nice.  You don't have to swap them to Terrorsaur's legs after transformation to beast mode and back again.

All three of the prehistoric animal guys on Beast Wars were pretty big on the cartoon, and Terrorsaur himself was larger than most of the other Predacons.  A Deluxe Class toy is a little smaller than would be proper scale, but a retool of Airazor is probably going to net you an Airazor-sized guy.  You can cheat his torso a little taller by not compacting it during transformation to robot mode, thus increasing his height, but it looks a little awkward and exposes an unsightly mushroom peg.  I might do it anyway.

This guy's currently sold out on Amazon (and HasbroPulse) but there's at least two ways to get this mold in the future.  Target's reportely getting Terrorsaur in more toy-accurate colors as an exclusive at some point, and there's also rumblings of a Fractyl redeco.  And there's probably a few more ways they could redeco this toy later if they choose to. 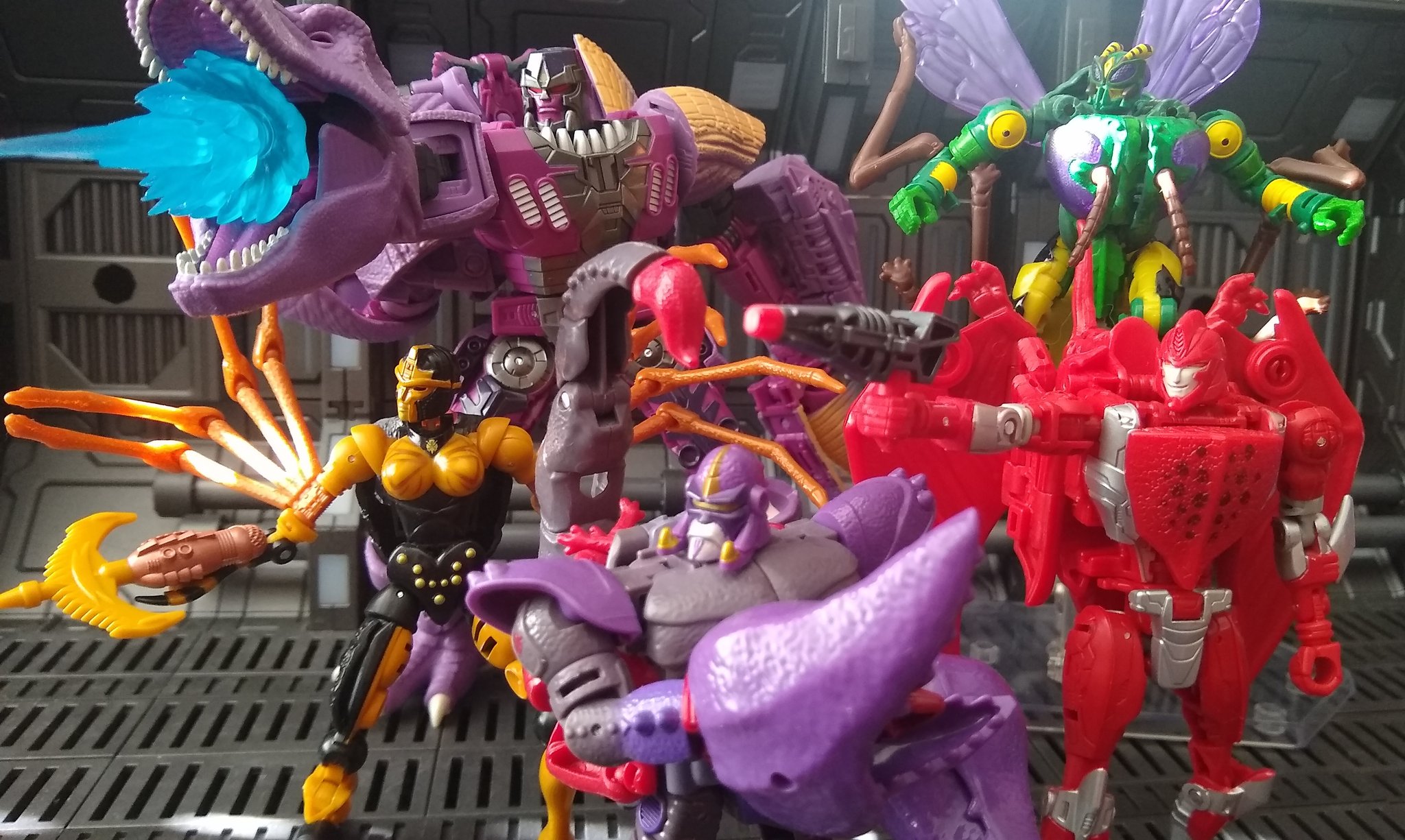 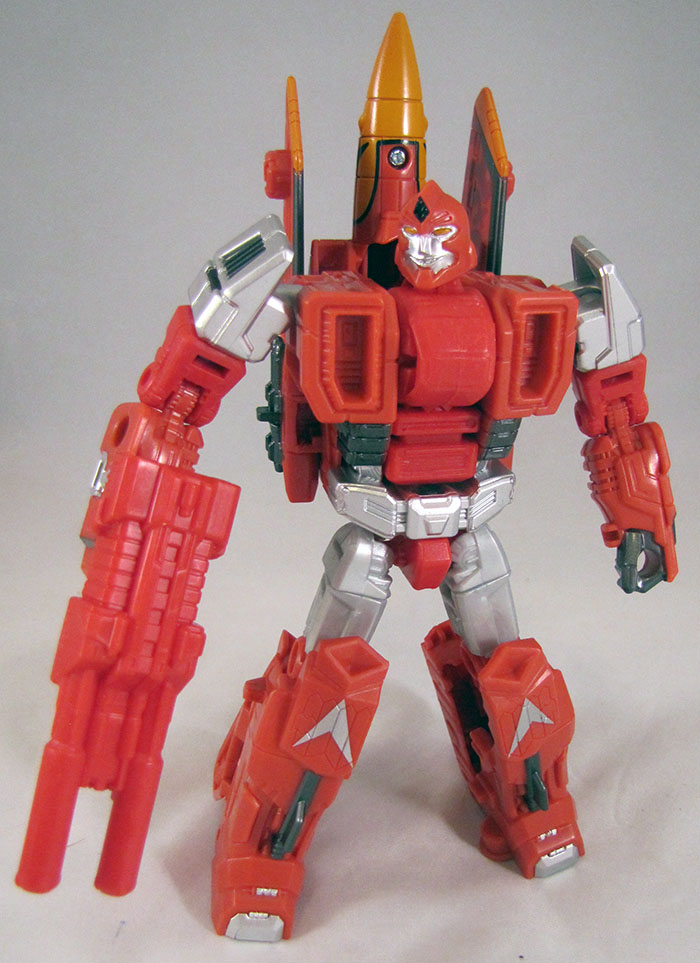 The only thing better than giving us pre-beast toys of the rest of the original Beast Wars Predacon crew is giving us those pre-beast toys in Combiner Wars form.  Terrorsaur mostly delivers on this!  For some reason he doesn't come with his hand/foot/gun, so you have to borrow somebody else's.  Or you can end up with a combiner with a limp, I dunno.

But, yeah, Terrorsaur satisfies me.  We got pre-beast Megatron, Waspinator, and Dinobot way back in 2006, and then pre-beast Tarantulas nine years later in 2015.   With Terrorsaur here, we're just one original Predacon down, and Scorponok is promised from the Figure Subscription Service before the end of the year!   Huzzah.

Combiner Wars Terrorsaur is in his cartoon deco, rather than the original toy deco which replaced the silver and other silver with black and purple.  As such, Terry's a little less vibrant than some may remember him, but the silver and charcoal, with the edges here and there of orange, do manage to keep him visually interesting. 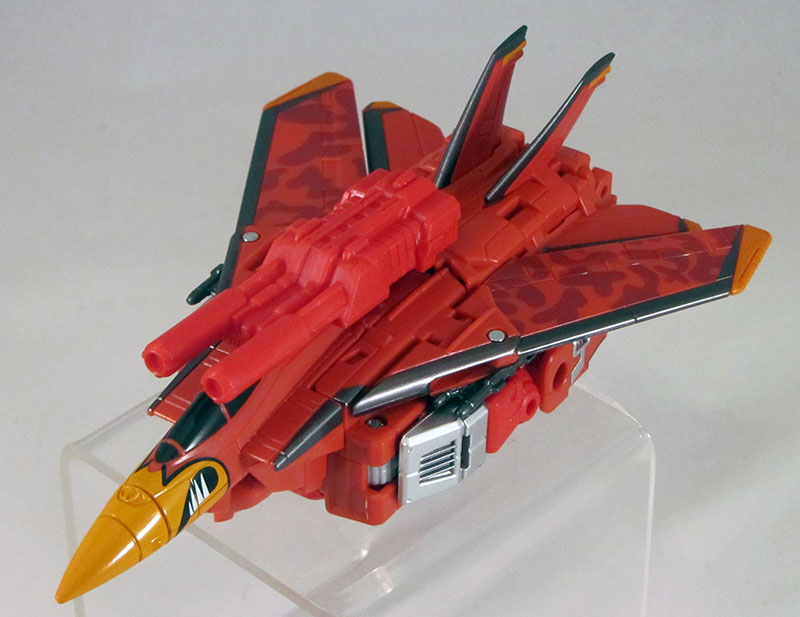 He's got a new headsculpt which is... well, it's goofy-looking, but in a way that Terrorsaur kind of looked all the time.  Those first few Beast Wars CGI models were kind of rudimentary.  This toy gives him a kind of awkward toothy grin, like he's stifling a chuckle after a fart, but honestly that's not too far off-character.

Combiner Wars Terrorsaur is also essentially perfectly scaled to his fellow pre-beast Predacon pals, as best as he can be, anyway.  Tarantulas is an abberation, being so tall, but otherwise CW Terrorsaur clocks in at just shorter than Dinobot and quite a bit taller than Waspinator and waaaaaaay shorter than Megatron.  These are all correct Nerd Measurements.  If pre-beast Tarantulas weren't done so perfectly I'd be more resentful of his size screwing up the otherwise perfect scale. 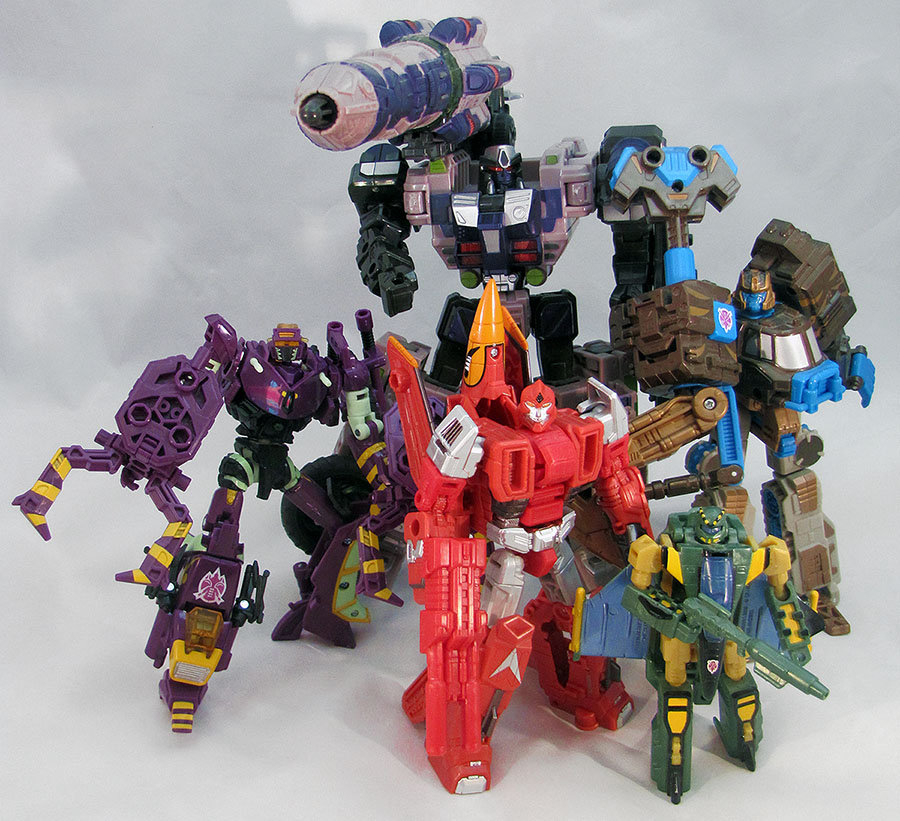