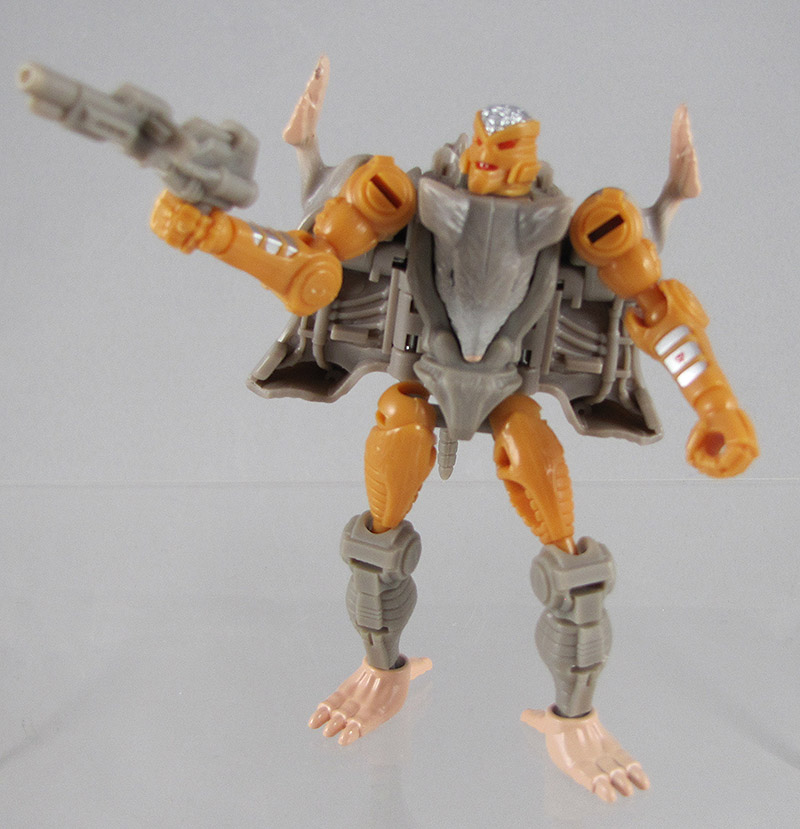 The third part of the War for Cybertron Trilogy, Kingdom, wasn't forecast to hit stores until March, and yet here we are, in November, with the initial trickle of them into one or two stores.  Amazon's even scoot up their estimate for delivery of these guys from February to next week.  Iiiiiit's happening!  Anyway, I threw my preorders in the garbage and grabbed a set of the first wave of Core Class figures from eBay.

Part one of WFC, Stege, was about the Autobots and Decepticons on Cybertron, pre-Earth.  Part two, Earthrise, is about them eventually getting to Earth and grabbing up some Earth alternate modes.  And Kingdom?  Apparently it's about Beast Wars!  I mean, there'll still be some Autobots and Decepticons, but we're here for the animals.  And taking the place of the $10 Micromaster two-pack pricepoint is the new Core Class pricepoint, which is some scaled-down G1 guys and some smaller Beast Wars folks.  (Presumably, the scaled-down G1 guys are for interacting with this year's Titan Class playset, which we don't officially know much about, but it'll be the Ark.) 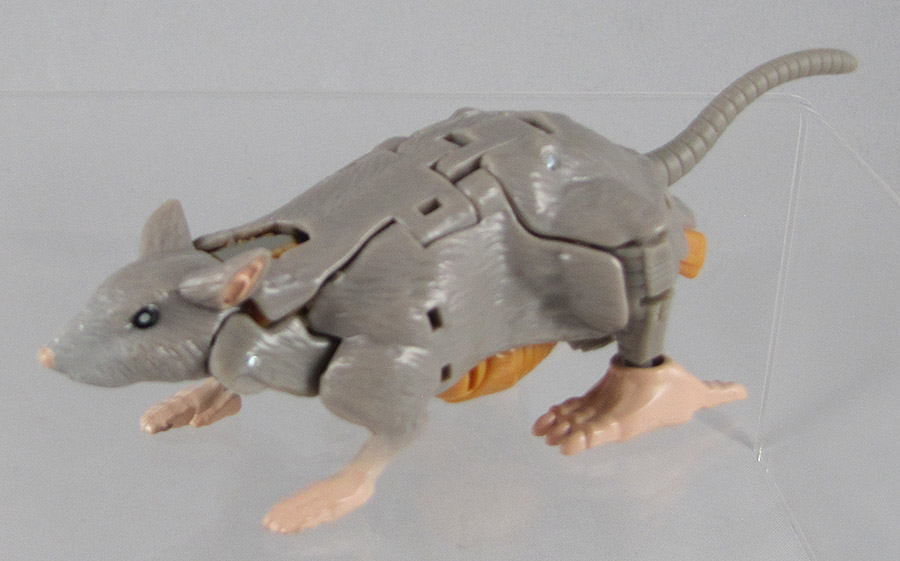 Rattrap is the lone returning Beast Wars character in the first wave.  (The other two are Vertebreak, a new Predacon; and a mini Optimus Prime.)

The War for Cybertron Trilogy has been doing their best to deliver cartoon-accurate robot modes of Generation 1 Autobots and Decepticons, and it was interesting to learn how that design ethic would handle the Beast Wars characters.  It turns out that the way we're going is robot modes that do their best to ape (aheh) the Mainframe CGI models, while the beast modes are taking a more naturalistic approach.  This is versus the Masterpiece Beast Wars toys which aim to copy the CGI models in both robot and beast modes.  So Rattrap's rat mode, you see, tries to look more like your typical actual rat than it does the cute CGI rat he transformed into in the cartoon. 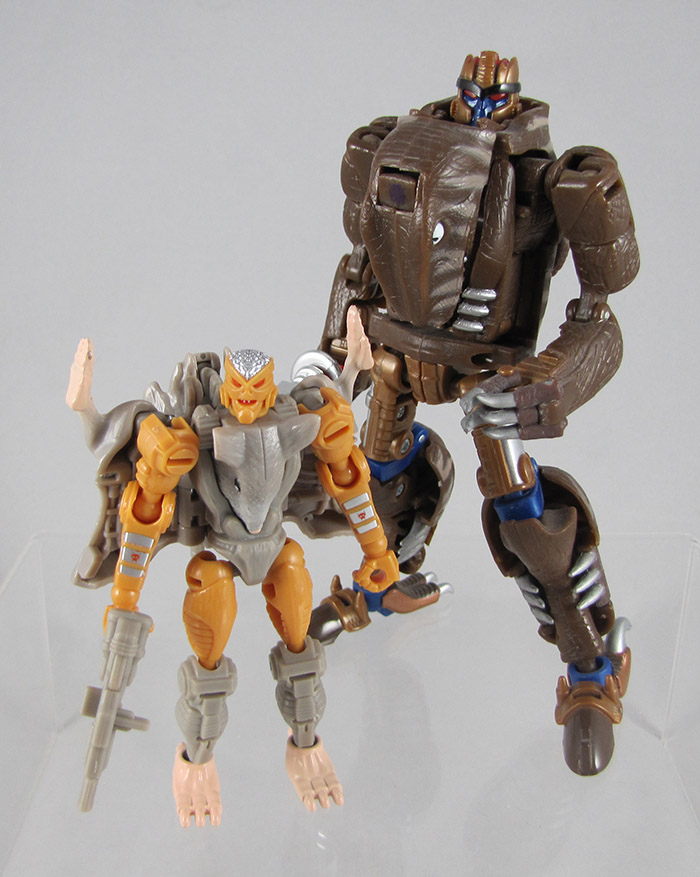 And, honestly, I'm big into that aesthetic.  I mean, I've got the Beast Wars Masterpiece toys if I need my Dinobot to transform into an awkward featherless duck or whatever.  I'm very happy for Kingdom to embrace better animal modes.  Rattrap's in particular is very pleasing!  It does indeed look like a little rat.  Enough so that I guess you should worry a little if you've got a-rat-nophobia or whatever.  In rat mode the toy is essentially immobile.  There is no articulation.  It's just a rat.

Which, at this scale, is fine enough.  This is a smalllllllll toy.  Maybe two inches long.  And I gotta tell you, this is the most complex toy I've ever seen at this tiny size.  He's got a lot going on in transformation.  Lots of little steps, and thankfully it all plugs in together well, mostly using various tabs that fit into the cooling vents in his balljoints.  Very economical.  It has to be, at this size. 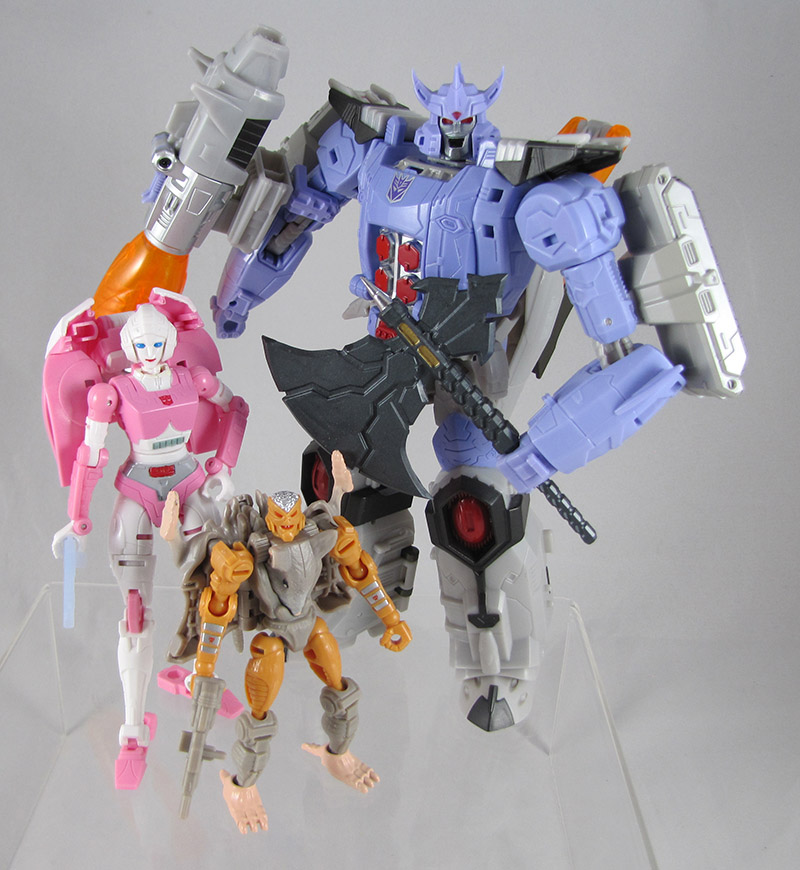 The perfect rat transforms into an unreasonably-well-proportioned robot mode.  Other than the more-realistic rat head on the chest, it achieves the look of the lanky CGI model.   The only real compromise is the robot feet, which become the rat's rear feet.  The was a choice to make them fully robotic or fully rat feet, and the choice was to go with a creepy midpoint.  Rattrap's feet are an organic redesign of his three-toed metal robot feet.  It's a compromise, again, but this is the scale we're working at.  Two inches. 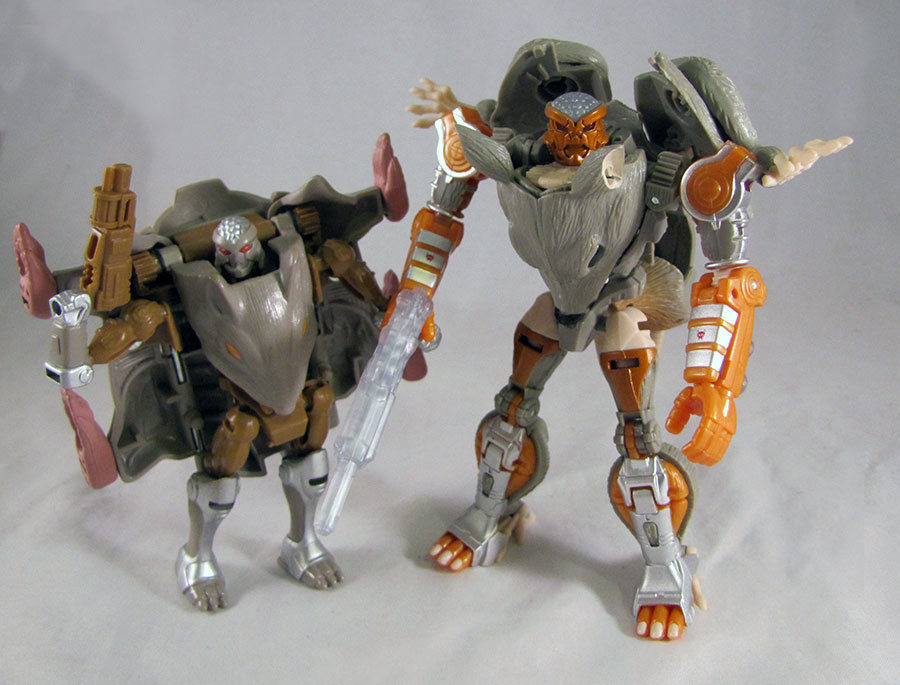 Tankor's wavemate is Rattrap, who's a Deluxe Classed version of his original 1995 Basic Class toy.  Back in 1995, all of the Basic Beast Wars figures had autotransformations -- in Rattrap's case, you move his rat mode tail and he springloads roughly into robot mode.  Most of these worked by cramming robot limbs up inside the altmode, resulting in a standard "robot guy with huge altmode backpack and a chest made from the head or ass or something" look across the size class.  Rattrap made it onto the Beast Wars television show, so it was established that Rattrap is that guy with a rat head on his chest and everything else from his rat mode piled up on his back.

Well, now it's 2014 (ninteen years later!), and it's time to make a larger, non-autotransforming version of that same design.  He definitely still has most of his rat mode on his robot mode back -- if he didn't, he wouldn't look like Rattrap -- but there is an attempt to integrate more rat parts in with his robot mode.  Well, okay, only his hind legs.  Those unfold and pack into the back of his robot mode legs.  His rat hindfeet become his heels.  The rat backpack does collapse in on itself better than the original's does, which is nice.  (The show Rattrap's backpack SHRANK, which isn't exactly an option here.) 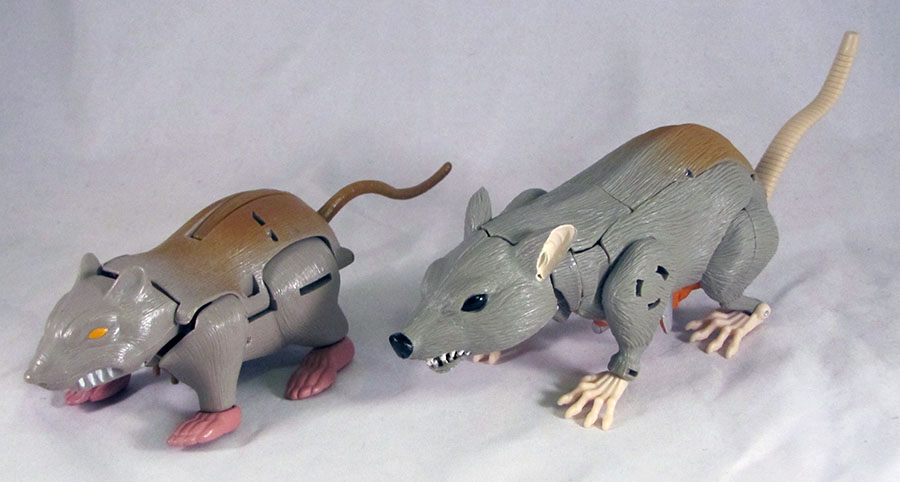 Since new Rattrap doesn't auto-transform, that means all the business of shoving his robot mode limbs into his animal shell is now your job!  And, yikes, is it a job.  It is a quagmire down there, with everything competing for the same spot at certain points.  There's about three separate joints in each knee that need to be bent and compiled in a way Just So in order for everything to fit together as it's supposed to, and until you figure out this correct way, transforming him may take you quite a while. 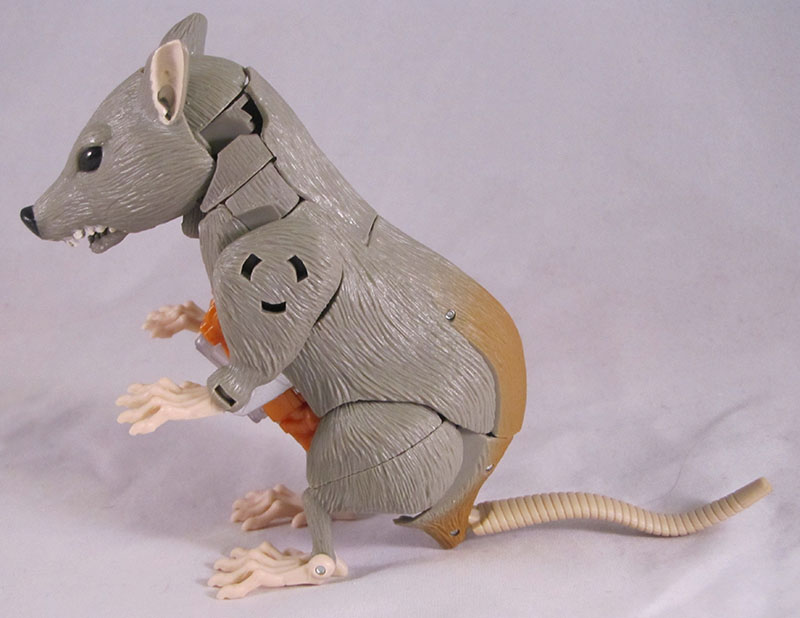 That said, his rat mode is wonderful.  It's got a prehensile tail (it's soft plastic with a wire running through it) and he's got somewhat poseable legs and feet.  He's also got an openable jaw.  But what really blows my mind is that he's also designed to stand upright if you want.  There's a patch of fur-textured gray plastic you can rotate up behind his rat head so that when you bend the rat head forward while upright, there's no unsightly gap in the back of his neck.  Of course, there's always going to be those robot arms in place of his rat stomach, but making the rat mode able to get on its hind legs goes a real long way towards making the toy feel like Rattrap the character.  I think this is my preferred mode.

The robot mode is great, but there are some small limitations.  His elbows can't bend a full 90 degrees, for starters.  This limits the amount of things you can do with his arms.  It'd be nice if his wrists rotated, too, and they look like they do, but it's possible this was something budgeted out at some stage.  His rat ears are also pretty large and tall (as they should be for rat mode) but they get in the way of most of his peripheral vision.  Photos of him need to be head on or from slightly above or you aren't going to see his head. 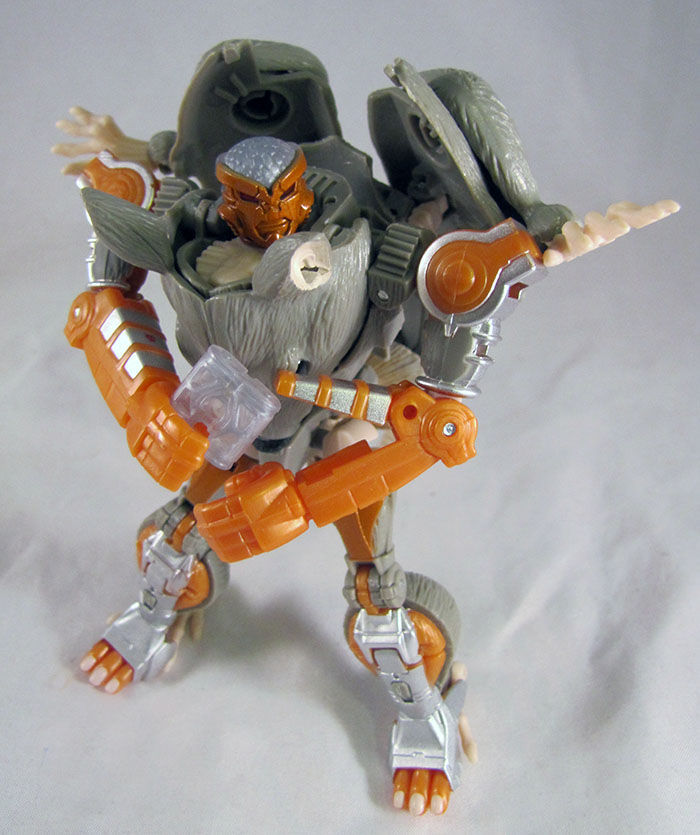 On the plus column side, he's got some interesting weaponry in this mode.  He has a rifle that can split up into two separate guns.  Open up his left forearm and you can pull out one of his sticky bombs which he used on the show.

In summary, this is a Rattrap toy with two great modes, some minor flaws, and an annoying transformation.  The latter deal should be somewhat mitigated once the proper leg transformation order is discovered, but not entirely.  It's a toy full of character and stuff to do.

(Like Tankor, his comic book pack-in is published with terribly out-of-order pages.)