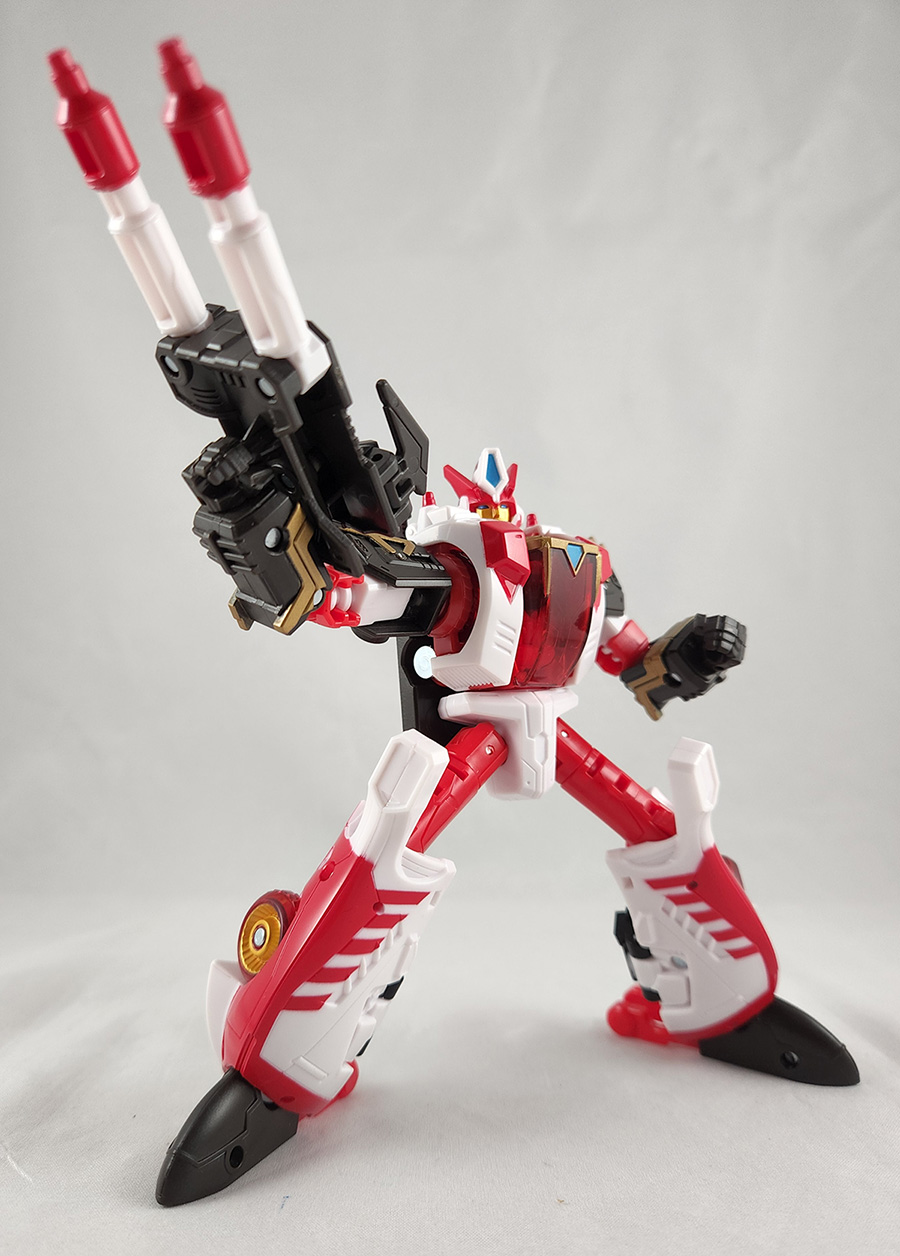 Legacy Velocitron Override has an interesting conceptual history.  Always a Walmart exclusive, originally she started out as a retool of Studio Series '86 Hot Rod.  Basically, everything above the waist would be new.  It would be Override with Hot Rod legs.  For this Walmart-exclusive toy, four new molds were budgeted, replacing four of Hot Rod's presumed 9 or 10.

But what if, Hasbro/TakaraTomy designers dared to dream, what if: Rather than giving Hot Rod four new molds to make him half-way Override, would it be... possible...?  to get an entire Override figure out of those four new molds?  Four plastic colors.  Fewer than a Deluxe (6-7 molds).  Could an entire be toy be somehow extracted from retool budget?

And the answer is: apparently!  Legacy Velocitron Override is just four plastic colors: White ABS, black ABS, red nylon (unpaintable), and translucent red!  Just four!  And despite this, is she still a good toy?

The answer is: surprisingly so!  It's a very satisfying toy of Override, whose original Transformers: Cybertron toy is probably the line's lowest point.  She didn't hold together very well!  Her torso, which was a zigzag of springloaded hinges, would just flop open.  And the toy couldn't stand.  It was back heavy, and had very little heel to speak of, and so she'd just pitch backwards if you looked at her funny. 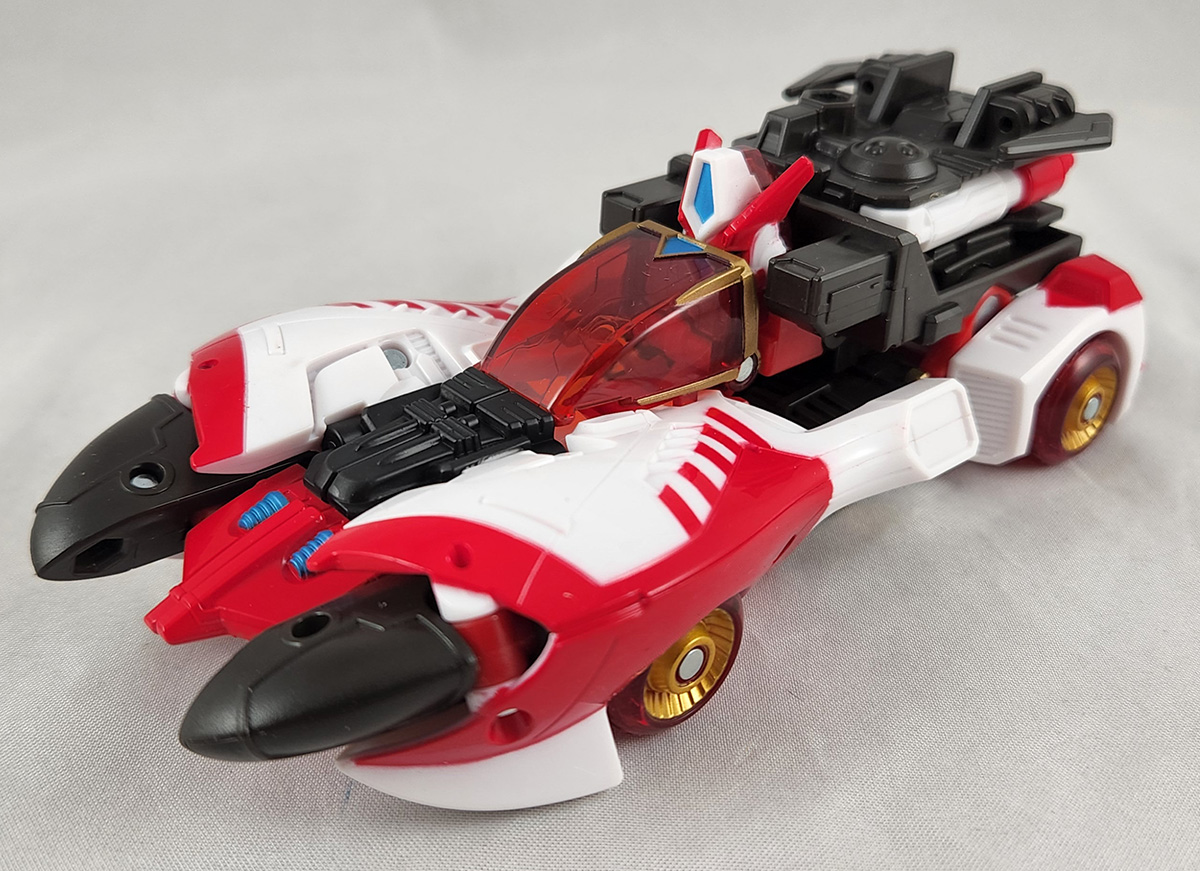 The new Legacy Override takes very strong notice of these two massive weakpoints and spends lots of engineering capital addressing them.  First, the torso is held together by a number of slots and tabs, enough to keep things in place.  And secondly: they put some dang heels on this thing to keep the toy stabilized.  It's not gonna fall over.

All of the Cyber Key-activated gimmickry is gone.  (though there's still a sculpted slot for one in the back of her gun)  But that's fine, because it didn't really work well for Override in the first place, and this toy addresses everything wrong and fixes it.  It's no longer key-activated or spring-loaded, but it... works?  It's not annoying?  That's a win. 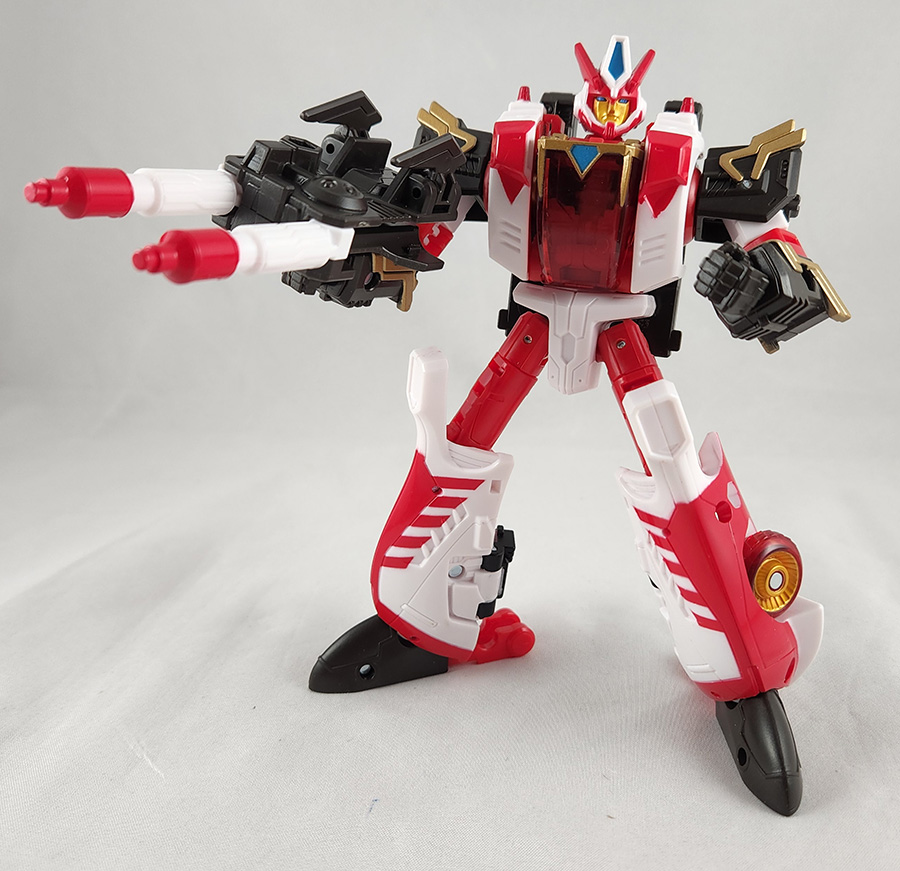 There's also some neat tricks to make the robot mode look better.  The torso compresses using some levers and sliders to make sure Override compacts into a more slim humanoid racing shape (and more closely matches her media appearance).  The middle portion of her hood folds across the back of her legs instead of adding to her backpack.  And there's also the expected level of articulation -- waist rotation, wrist rotation, those fabled ankle tilts, the works.

It's an attractive, engaging toy!

I mean, it's a 4-mold Deluxe sold for Voyager price, but I like it more than I would have the original retooled Hot Rod intent, so I suppose that's still a win.

Override is exclusive to Walmart!  And she's not shortpacked (there's even some full cases of her), so she shouldn't be that hard to get ahold of.