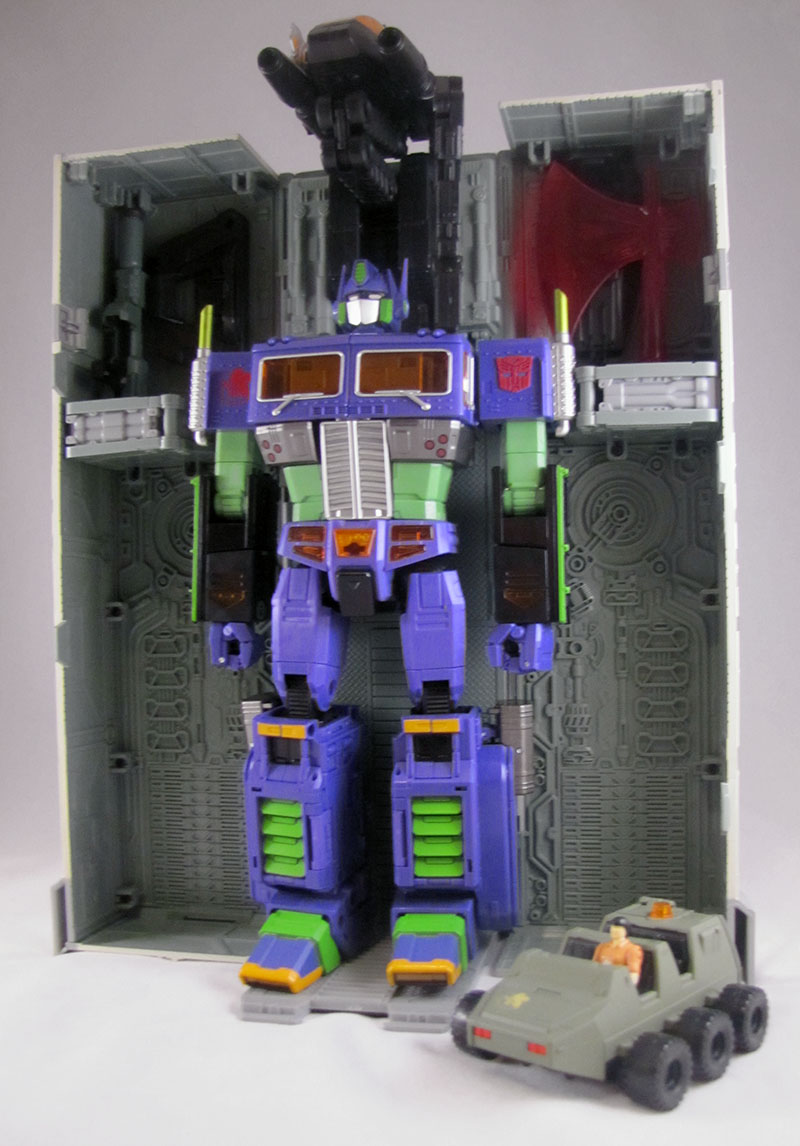 I'm not sure there's a lot to say about this purchase.  I got it for three reasons:

3. I like purple, orange, and green on things that shouldn't be

If you've handled Masterpiece Optimus Prime The Second, you'll know this guy's deal, but Convoy Mode "EVA" is in crazy secondary colors instead of the usual primary colors.  There's a little Spike painted up in NERV uniform, an intricately-decoed trailer, plus an ax and a Matrix crystal done up in blood red.  It's insane crosspromotional zealotry between two of my favorite properties, against all reason, and I had to have it.

Anyway, now TFWiki has a Misato Katsuragi article, the end.

For Christmas, the mighty Cholma gave me the gift of underage teenage girls!  I am required by law to state upfront that I absolutely do not harbor any kind of perverse sexual lust towards Asuka Langley ShiftingLastName.  None whatsoever.  I am pretty sure that would be a crime, and I am a law-abiding citizen who lives by a strict moral code.

My gift from Cholma also included Rei, who is your albino mom if your mom had a concussion or something.  Her schtick, other than being your sexy mom, is that she can be bandaged up if you want her to be.  I'm sure this is checking off somebody's list of fetishes, but it ain't mine.

And there's the new girl, Mari.  If you know me, you know I appreciate that she has glasses, but she's entirely way too into you and how you smell, nor does she hit you or call you stupid, and so I know ahead of time that this relationship just isn't going to be screwed up enough for me to be interested in it.

I don't want anyone to come away from these paragraphs with the impression that I don't absolutely adore Neon Genesis Evangelion, because I do.  I just like to tell myself that I have a healthy attitude towards my love of it.  If you can't love something despite all its creepy faults, did you ever really love it to begin with?

Anyway, these are Revoltech folks.  They're hyper-articulated!  And they come with like fifteen billion different hands and a handful of other accessories.  They also come with some variant faces, like Mari's awesome "I AM SO CRAZY" face and Rei's "I seriously get bandaged up a lot like all the time" face.  One of the best parts about these sets is that they come with a little translucent box to store their numerous accessories.  This is not only amazingly appreciated, but it also gives you a bunch of boxes with occasional little girl faces.  Just, you know, staring at you.  Disembodied.  I swear, any more of these little faces and my Ego might be destroyed and I might bring upon Third Impact.

Thankfully, I've got Ego to spare.

P.S. Don't be an asshole and talk about the last part of the movie series which hasn't come over to North America yet.
Tags: evangelion
View/Post Comments
SP!@TNI #237
Posted April 17, 2011 at 4:52 pm

Part of the reason I'm hesitant to collect Eva stuff in general is that nobody ever even makes any damn Shinjis, much less Gendo.  Stupid teenage girls!

So I guess I only do an Eva strip every time a Rebuild movie comes out.

Which means it's that time again, and coincidentally it was also my birthday, so my wife got me a Revoltech figure of Asuka Langley-Sohryu Shikinami, because she knows I have this thing for Asuka.  I cannot help it!  It's not my fault!  She's just too awesome.  This is just the way of things.

This is a figure of her new plugsuit that she wears starting halfway through the film (no additional spoilers here).  On the plus side, there is additional orange.  I love orange.  On the downside, apparently the orange is like a translucent torso window.  I was about to type that somebody in NERV loves fourteen year old girls a bit too much, but then I realized the Internet would implode from the sheer unrivaled obviousness.

The best thing about this Revoltech figure, really, is the little box that it comes with that you can store all of Asuka's extra parts in.  Oh my god that's so wonderful.  I lose accessories like people lose skin flakes.  The parts kind of have to settle in just the right way for the lid to close, but it's certainly a far cry better than just having to keep the packaging tray forever to store all of the tiny hands.

In addition to all of the extra hands, Asuka also has two additional faces.  This would be most excellent, except the face I would like the best, the angry shouting face, doesn't really look like such when you plug it into the back of her cranium and slap her bangs back on.  See, the bangs cover up her eyebrows.  In anime, usually the eyebrows are drawn through the hair, eliminating this visibility problem, but this is a three-dimensional object.  With the eyebrows covered up, it just looks like she's happily shouting.  That's her wearing the angry face in the suspended-by-the-display-arm image, for reference.

Another difficulty is how the hands swap out.  I really have no idea what I'm doing with most of these pieces.  Some of the extra hands have the wrist-joints connected to them, and some of the extra hands have to connect via an extra wrist piece.  On top of this, there are two different sets of wrist-cuffs or whatever to place over this set-up like a washer.  Why is this done this way?  I do not know.

The actual figure is great, of course.  It's a Revoltech figure, and so it's a big pile of ratcheted joints.  That's what Revoltechs do best, is be a big pile of joints.  Hell, even the hair is jointed.  It splits up into three parts, so you can have it fly in the breeze however you please.

The wife and I still need to find the time to see Evangelion 2.22 together.  I have seen it in English, as Asuka sounding like anybody other than Tiffany Grant is just wrong to me, but Maggie cannot stand any English dub of anything.  This is one of the few things in which we are incompatible.  So when we get some time I'll have to brave through the English subtitles.  Which is fine by me, since it was a pretty crazy/awesome movie that I don't mind seeing again.
Tags: evangelion, asuka langley
View/Post Comments
AnimeFest 2010: Saturday
Posted September 4, 2010 at 10:50 pm
Tags: conventions, last stand of the wreckers, megatron, optimus prime, power rangers, animefest, ironfist, evangelion, robin williams, deadpool
View/Post Comments
Page 1