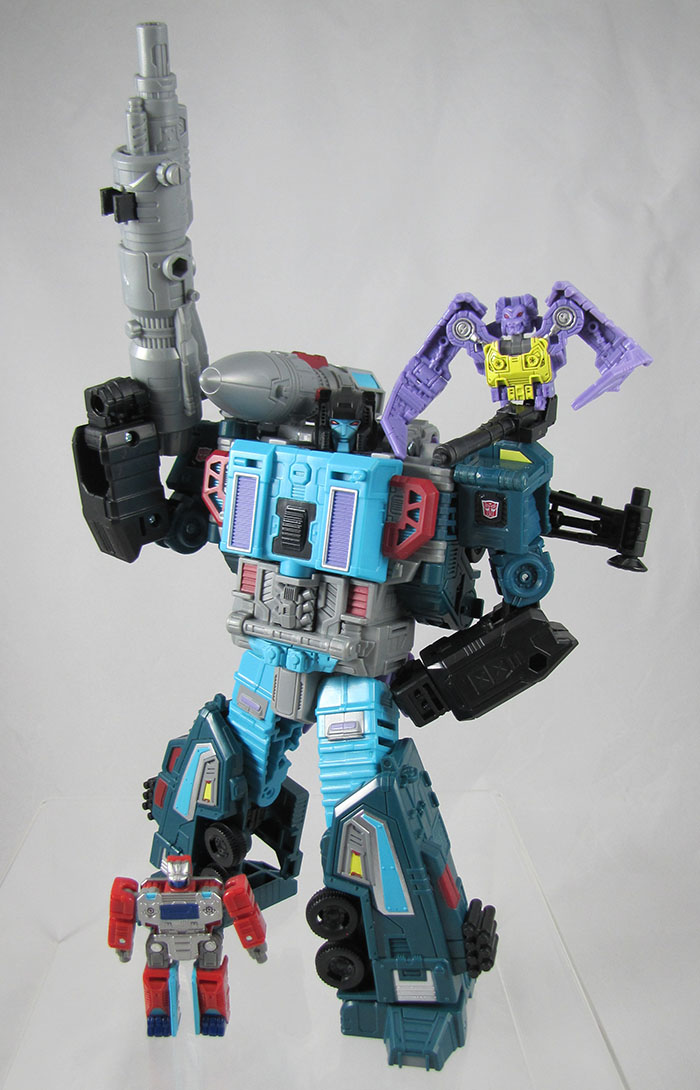 Both Stege and EarthRise like to beat the hell out of that 1984 drum, but ever so often it'll give us a small crumb from the margins of the original toyline.  So, hey, say hello to Doubledealer!  This 1988 Double Powermaster is back, minus his Powermasters, sort of.

Transformers has been steadfastly adhering to the old Eighties cartoon as its bible, and so Doubledealer comes in like an enigma.  We like to have things look like the cartoon, but Doubledealer only appeared in animated form in a commercial which you can only find fuzzy versions of on YouTube.  We like things to be SCALED like they were in the cartoon, but, again, same issue.  What Doubledealer looks like and how big he is are largely things Hasbro could make up.  And so EarthRise Doubledealer takes its lead from the original toy a lot more than it would otherwise.  And it turns out Doubledealer is a pretty chonky dude!  He's Leader Class, which recently means "Voyager Class-sized robot with extra stuff," but in his case he's extra wide and a little extra tall and a higher parts count.  He's dense. 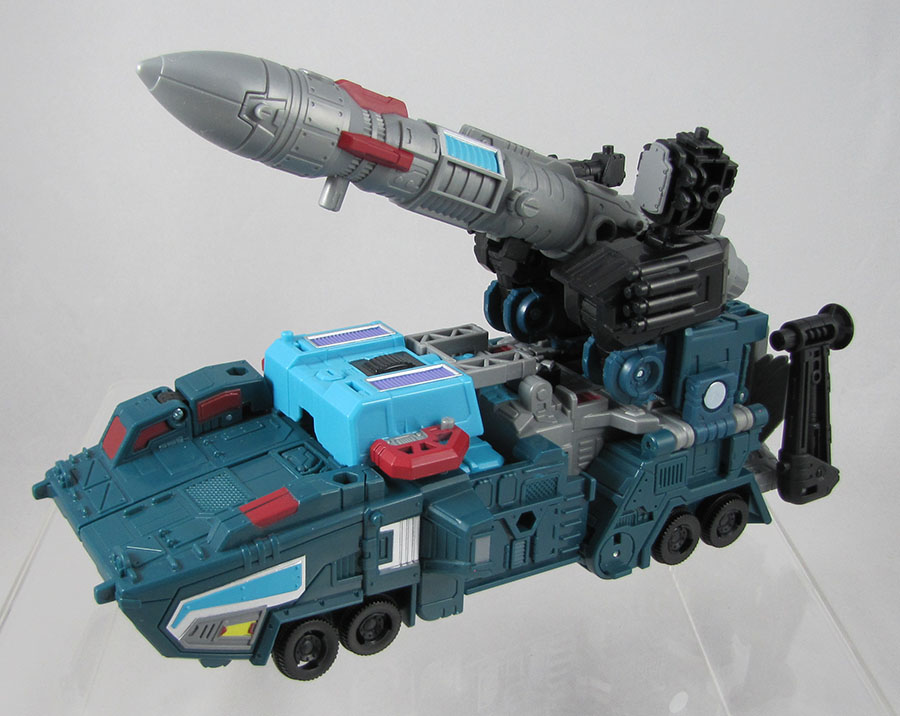 The original Doubledealer was pretty lanky, but EarthRise Doubledealer adds girth so that his torso can encompass a gimmick borrowed from Soundwave.  Yeah, he's got a tape cassette compartment!  That's how the Powermaster angle is achieved with him this go-round.  His Powermaster buds were released separately as part of an online-exclusive mini-cassette four-pack, and so instead of attaching them to him as little engines, you slot them into a big box on his chest.  Knok (the red humanoid partner) has his details sculpted into Doubledealer's abs, but you can still put Knok into Doubledealer's chest compartment, unplug a portion of the engine detail from the abs, and replug it onto Knok.  Ditto with Skar, though Skar doesn't seem to be sculpted into Doubledealer's bird mode. 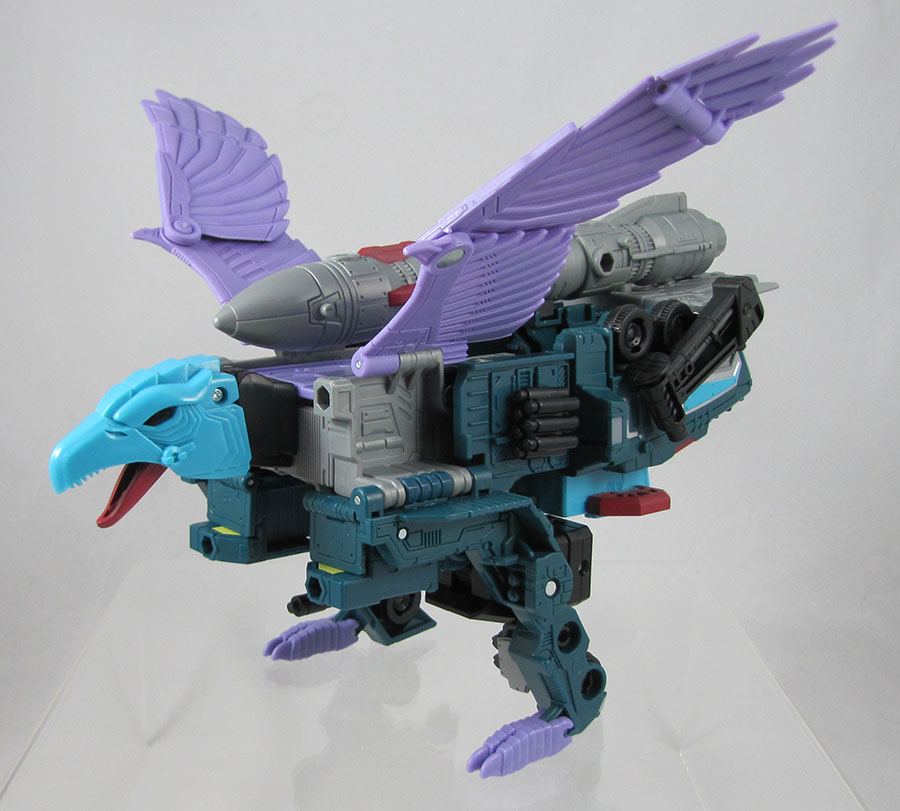 (That was Doubledealer's double deal.  He was an Autobot-aligned robot who transformed into a Decepticon-aligned vulture/chicken/thing, and his missile truck mode was the... neutral mode?  In practice, he was pretending to be two folks -- Both an Autobot robot/truck guy and a Decepticon bird/truck guy.   Just... two guys, both with the same missile truck mode.  You weren't supposed to connect the robot guy to the bird guy.  Optimus Prime wasn't very perceptive, I guess.)

EarthRise Doubledealer is... complicated!  Like I said, he's got a high parts count.  Lots of hinges and stuff, all of which help you get a pretty okay robot to an acceptable missile truck to a block with a head and wings on it that's a bird because we say so.  When there's a robot/vehicle/animal Triple Changer, I feel it's the animal mode that suffers the most.  And being a bird doesn't help, either.  Transformers has trouble with birds.  There's a not a lot of volume in a bird for stuff to go, and so you end up with situations like Doubledealer where he looks like a chicken that's trying to poop a truck.  Like half his beast mode is truck butt, with a tiny little bit of tailfeathers on top. 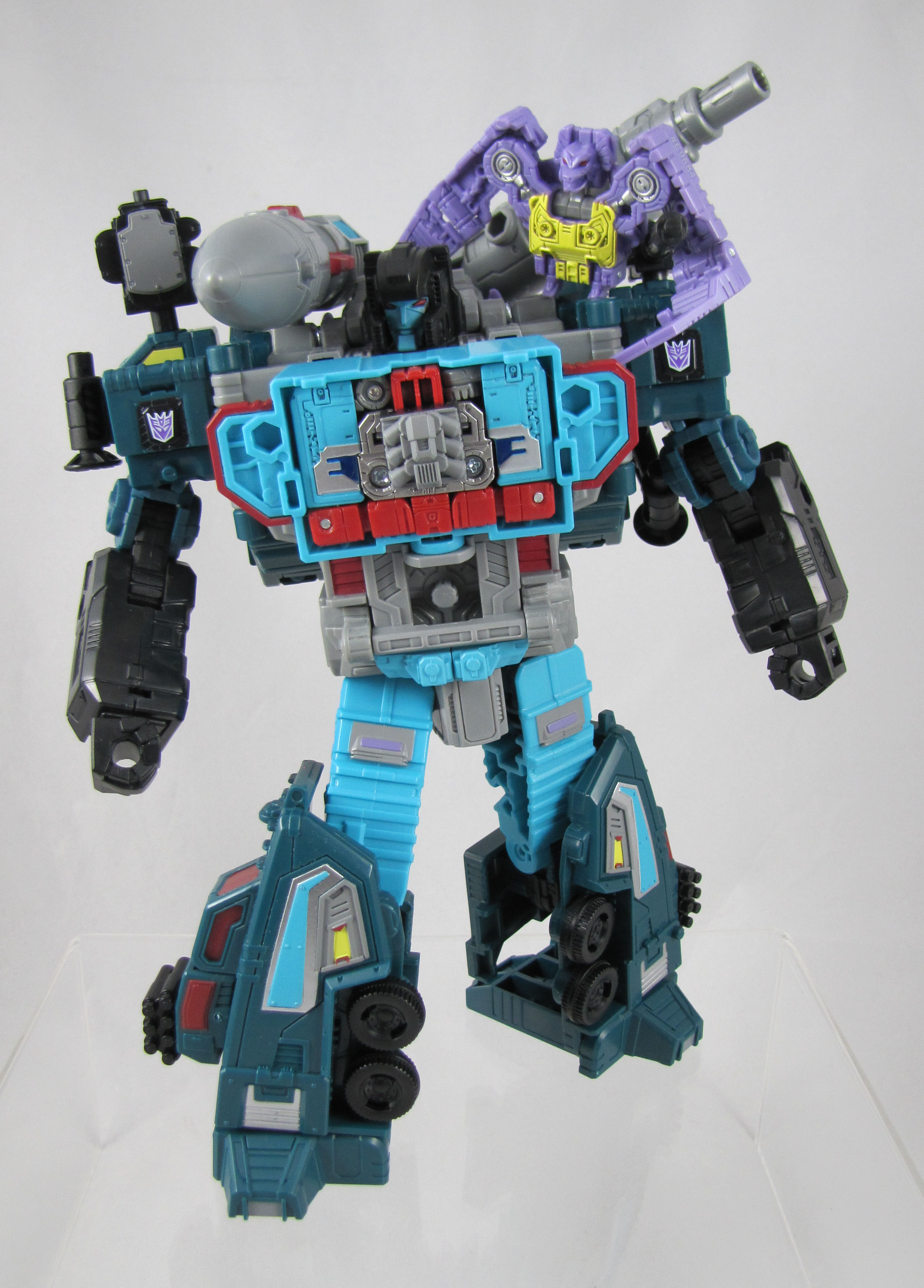 The original Doubledealer placed his giant missile slung under his torso in bird mode.  Earthrise Doubledealer realizes, yo, this looks like a huge dick, and officially the missile gets placed on his bird mode back.  ....however, there's 5mm pegs placed underneath if you still want to give him that huge traditional bird dick.  And it's not a happy accident, they're definitely there for that purpose.  Gotta keep the fans happy with bird dick!

That's essentially EarthRise Doubledealer's deal!  1) Hooray, a minor character from the latter days of G1 who's not, like, the 30th Prowl toy!  And 2) oh dang he is fussy.  He's just trying to do so many things at once, but not any of it well.  Not any of it TERRIBLY either, just, you know, he's solidly in the middle.