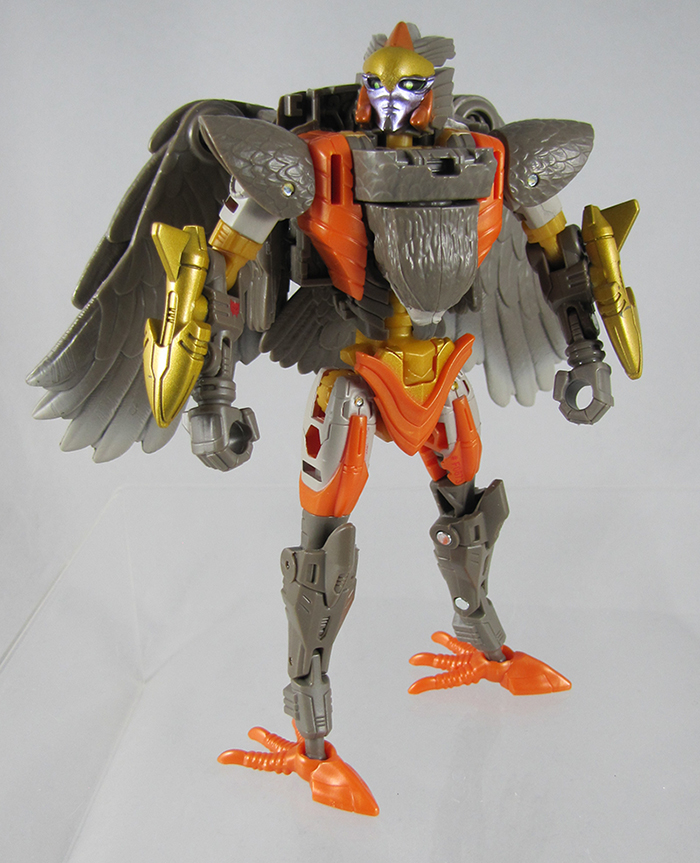 Every round of reimagined Beast Wars characters usually only goes so deep.  You always get your Cheetors, Primals, and Megatrons, and maybe also your Dinobots, Waspinators, and Rattraps.  But Transformers: War for Cybertron: Kingdom is the first time we've been able to scratch beyond that surface to some other characters.  In that respect, Kingdom Airazor is the first genuinely exciting Beast Wars character to appear in it!  Airazor's last beast toy was in 1998, the Transmetal.  (It was redecoed for Armada in 2003.)   There've been two vehicle mode style Airazors from BotCon since, one being Energon Slugslinger with a new head and the other from the Slipstream retool of Windblade.  But again, both jets, and both retools and redecoes of other toys.  Kingdom Airazor is just... a new toy of Airazor, from the ground up. 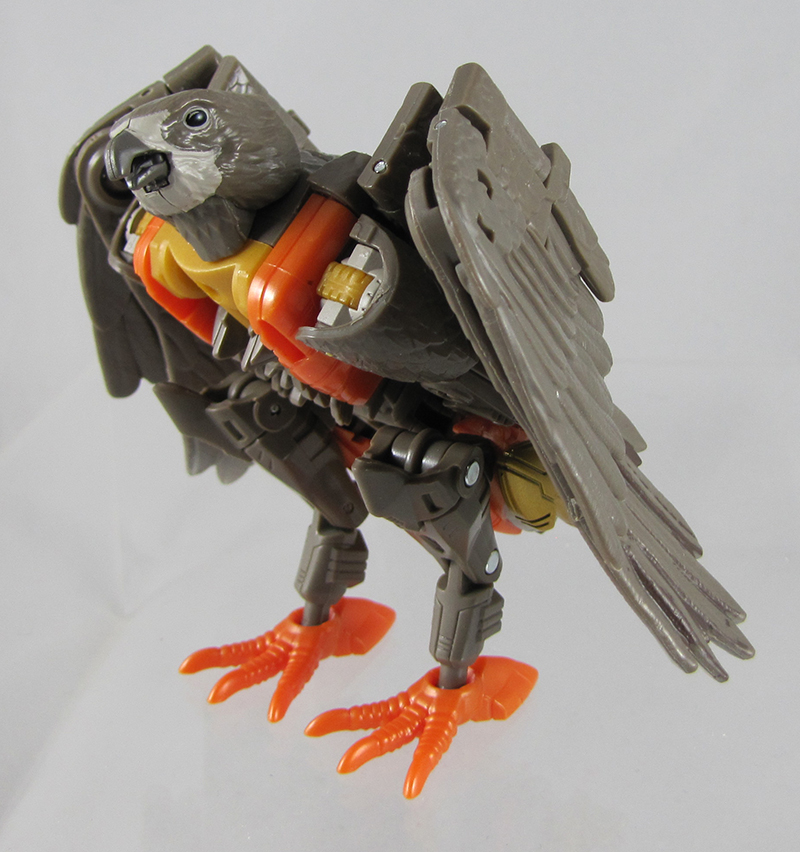 And it's pretty dang good!  It spends a lot of its budget on hinging the heck out of her wings, which helps with falcon poses.  They can fold up beside her body for when she's perching, or they can spread out for when she's flying.  They're jointed enough they can fold in on themselves enough to minimize their size in her silhouette in robot mode.  (They shrunk a lot during transformation on the cartoon.)  They're nice, big expressive wings.

She transforms by wadding up her robot mode a bunch, just like the original toy, though stuff now has places to go and lock in, rather than just hanging underneath loosely like originally.  Though it looks like a mass of robot parts from underneath the bird mode, it still achieves the rough shape of a bird, so it still feels right.  My lone complaint is how robot-techy her legs are.  On the show, they were round and organicky, and if the Kingdom toy attempted a more show-accurate look in at least that one respect, her legs would work better visually in either mode.  They oddly stand out amongst the rest of her toy, which borrows heavily from the CGI model.  They really wanted to give her robot legs, I guess. 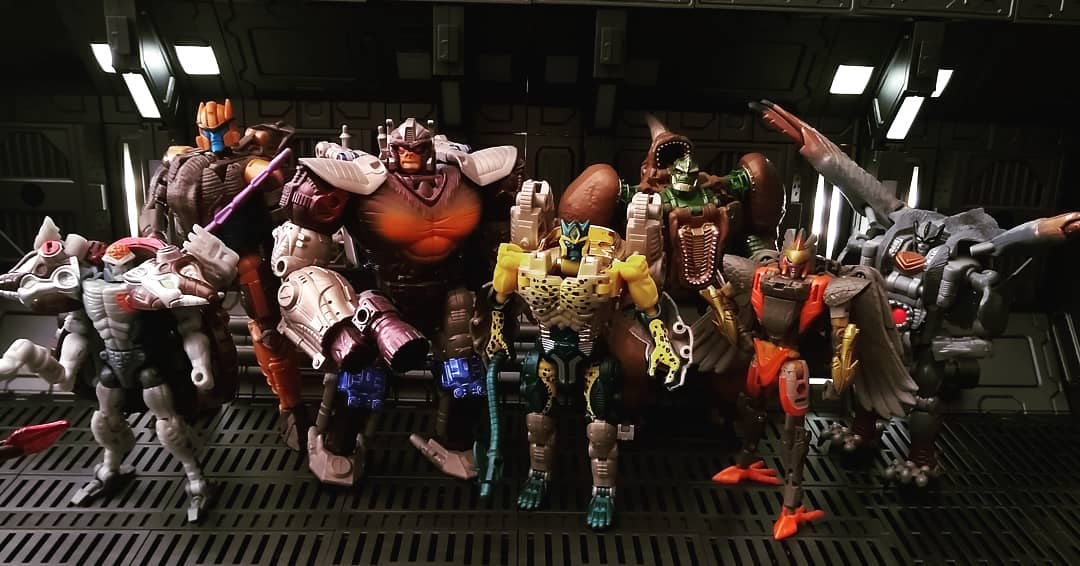 Airazor comes with two wrist-mounted weapons that can unplug and replug under her beast mode tailfeathers.  She's as articulated as you expect from a War for Cybertron Trilogy toy, including the waist articulation and ankle rockers.  Her neck in either mode has a good range of motion, and the falcon's beak opens.

A pretty solid toy all around, which is what Airazor deserves after so dang long.

Tags: airazor, kingdom, generations
View/Post Comments
Let's just skip ahead to making Airazor one of the Thirteen
Posted April 15, 2016 at 12:30 am 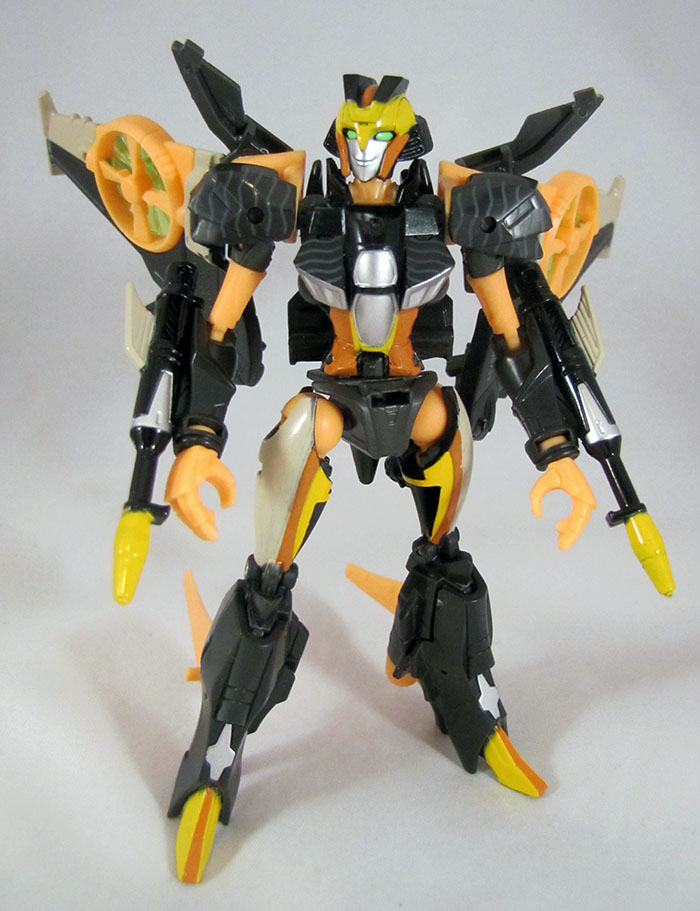 I keep wanting to say, "one of the best BotCon toys this year," but honestly, they're all pretty damn great, so unless they all get to tie for second and first place, I dunno.  But this Airazor?  It's a pretty good toy of Airazor!  If you don't mind that she's not a bird!

Combiner Wars Airazor (she doesn't combine) is a redeco of Slipstream who herself was a heavy retool of Windblade.  There's no changes to Slipstream's sculpt, just a different deco, and yet it works pretty damn well as Airazor.  The head is painted up to kind of resemble Airazor's beaky bird hat, the fake sculpted cockpit on her chest is a reasonable vehicleish facsimile of a falcon's head, and the whole brownish-black/tan/yellow/extrayellow thing going on with her, with the dash of translucent green, is pretty fancy.  It's not a group of colors you see together a lot in Transformers, if ever, especially since the retail line has been kinda overwhelmingly White And Red for the past year as Combiner Wars has retreaded 1986.  Whoever designed the deco on this toy, good job.

I don't reeeeally want to get into the convention comic in which Airazor featured right here, right now, because, again, as I said, there would be swearing. 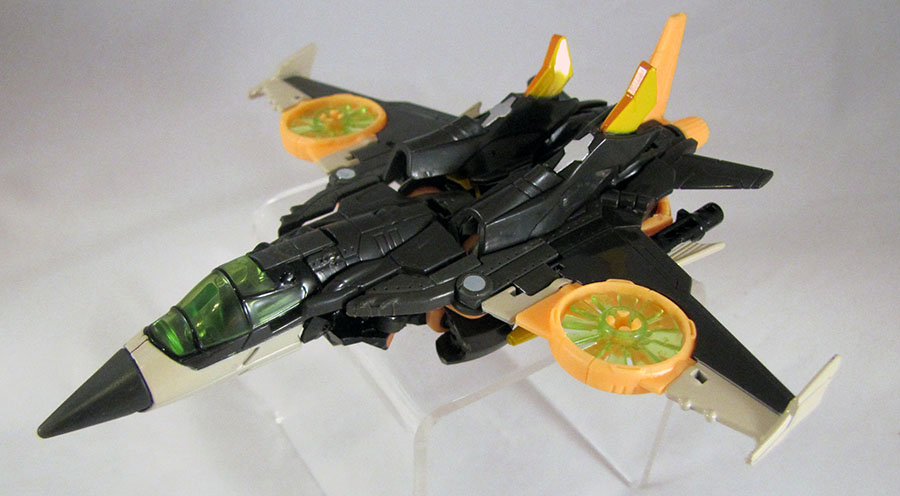 So let's instead say this is superfab Airazor bein' all jetty in the years following her enigmatic disappearance following the events of Primeval Dawn!  Let's unfridge her.  Yup, she's returned from the distant past to the less-distant future, maybe to participate in some Universe wars or something.  It could be fun!  Think of all the adventures she could have, y'know not being a super important Autobot from the end of the Great War or anything like that. 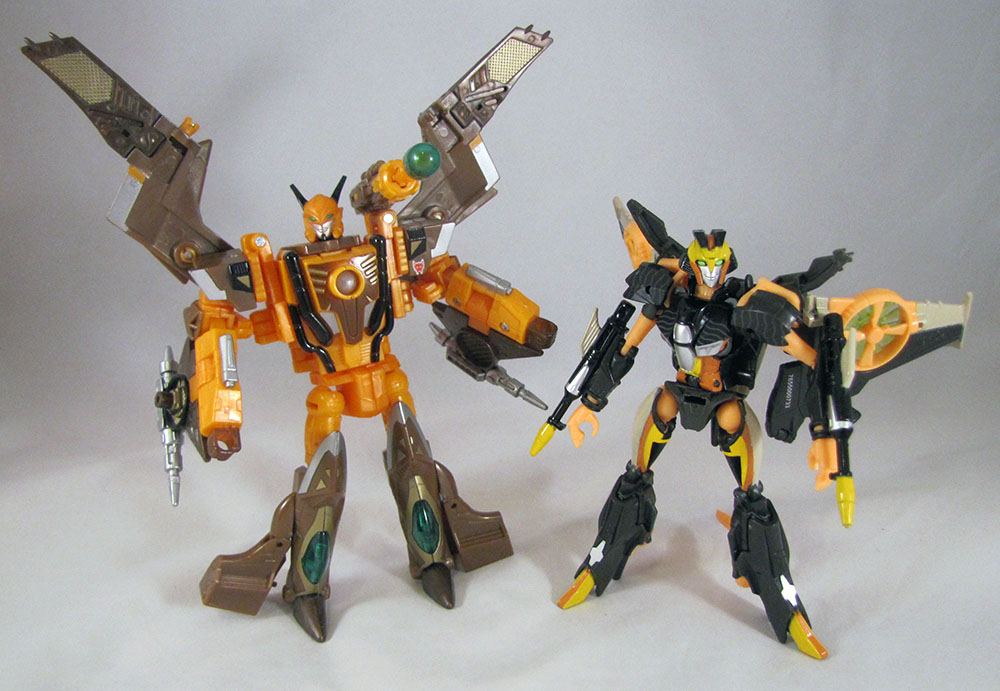 Anyway, she technically replaces the other Airazor-as-a-jet-instead-of-a-bird exclusive toy we got a decade ago, which is a replacement that is FINE BY ME.  Timelines Airazor is, like, one of the worst things ever, and I own her because I am dumb.  First of all, she's the Energon Slugslinger toy, and Energon Slugslinger is terrible.  Like, it's one of those infamous Toys That Hate You.  There is no love for humanity in its engineering.  It was designed to snuff out your life force.  Now, imagine that toy with an Airazor head and at exclusive limited-run prices and representing a fundamental misunderstanding of the character herself.

But there's a better one now.  You can bury the other in the back yard or maybe set it on fire.