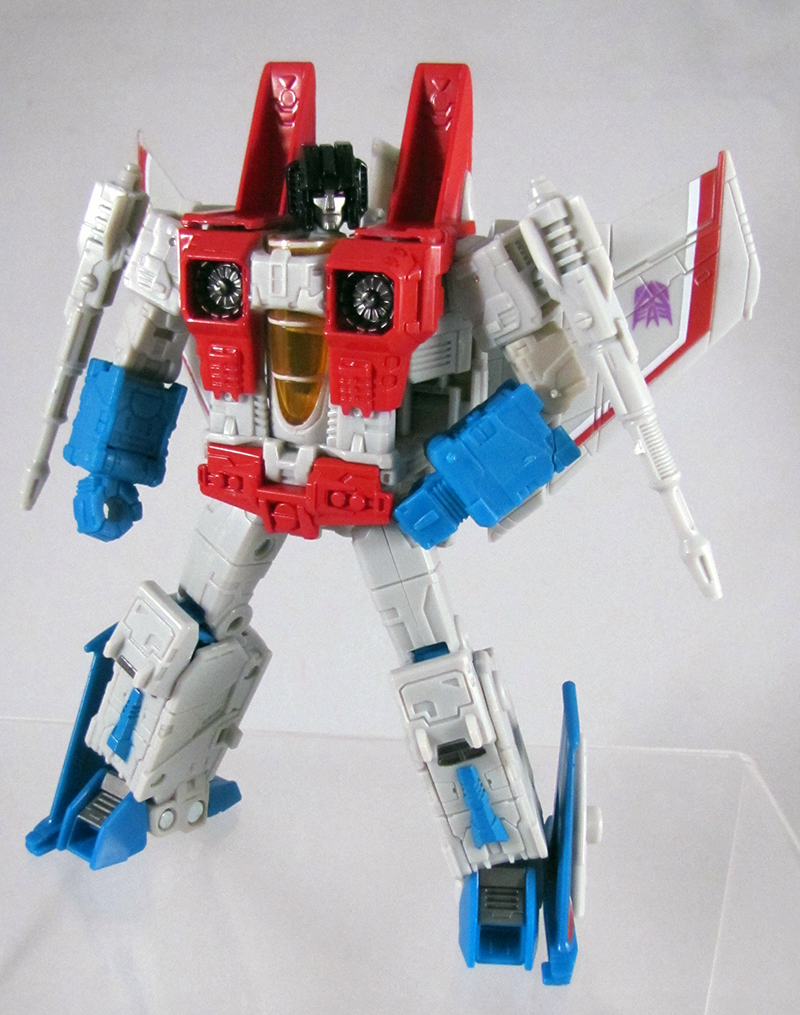 (Though honestly, it's Starscream.  He's popular.  Folks will buy him, even if you or I are not one of those folks.)

The thing about Stege Starscream is that he was surprisingly great.  You know, for a shellformer.  He wadded up his robot mode into a little ball and you close the spaceship mode around him, the end.  And while that in itself may not be what we strictly want out of a transforming toy, it did offer some advantages.  Mostly, like, Stege Starscream's robot mode was incredibly poseable, especially for a Starscream.  It had waist rotation, it had ankle tilts, it had double-jointed elbows, it had shoulders with wide range... you could get the danged thing to fold its arms across its chest, fer cheese's sake.  It could do that BECAUSE it folded up into a ball and the altmode closed around it. 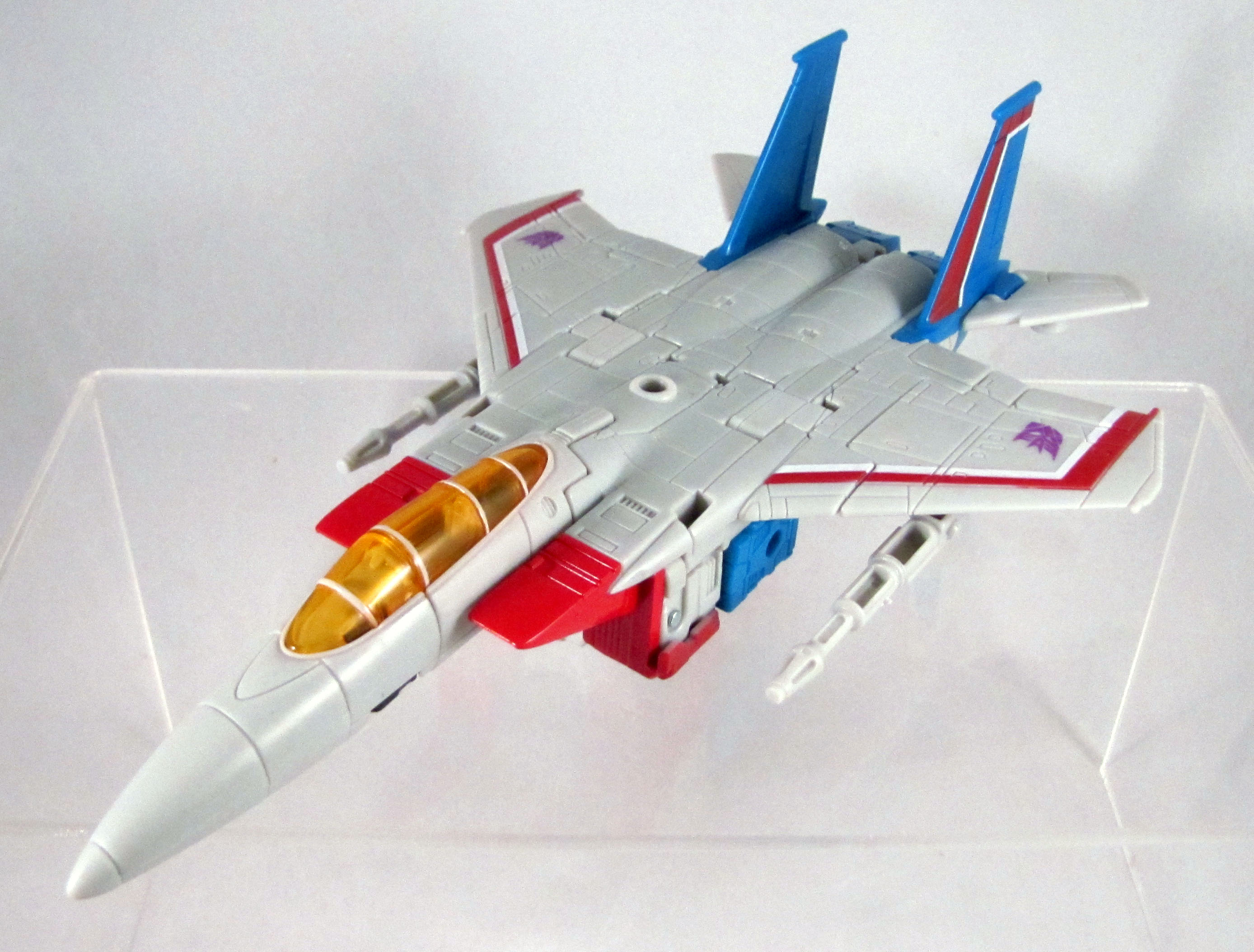 EarthRise Starscream, meanwhile, is ... a Transformer.  It transforms.  The cockpit becomes the cockpit chest, the wings become the wings, etc.  The robot becomes the jet -- at least as much as most Transformer robots become jets.  And that... means the articulation is scaled back.  It's been noted by everyone (including Hasbro) that ER Starscream is essentially a scaled-up Classics 2006 Starscream.  And it... has slightly more articulation than that toy, which was notoriously stiff.  ER Starscream adds some wider range to Classics Starscream's shallower joints, plus a bicep swivel, and the head turns independently of the nosecone on his back, there's those ankle tilts that are all the range... 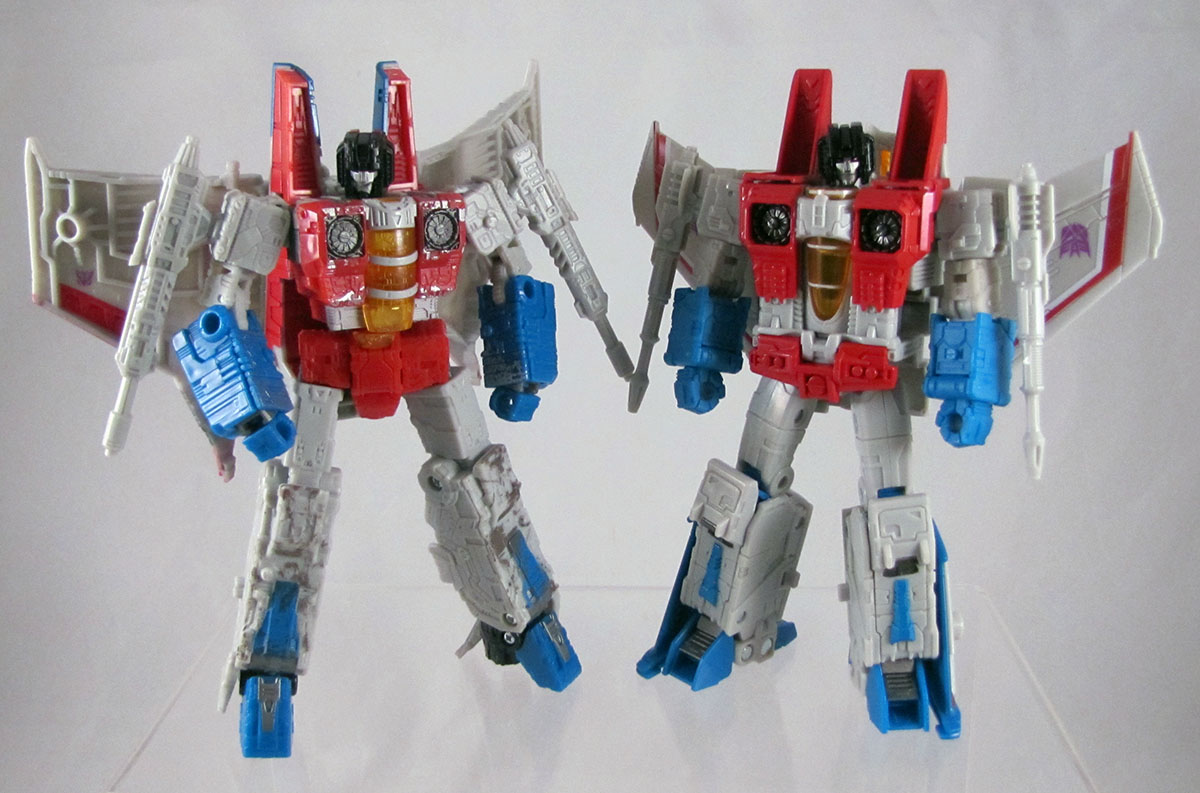 But there's no waist rotation, which is a gaddanged FIRST among the Deluxe-and-up toys in this War for Cybertron toyline trilogy.  There's no double-jointed elbows, no extra range in the shoulders for arms-folding (it was required for transformation on the Stege toy).  And so after the absolute bounty of articulation that Stege offered a Starscream for the first time, this new Starscream feels stiff.  Even though, on average, his articulation is more than Starscream toys typically have.

On the other hand, it actually transforms traditionally without being a Popple.

So, y'know, pick your poison, I guess. 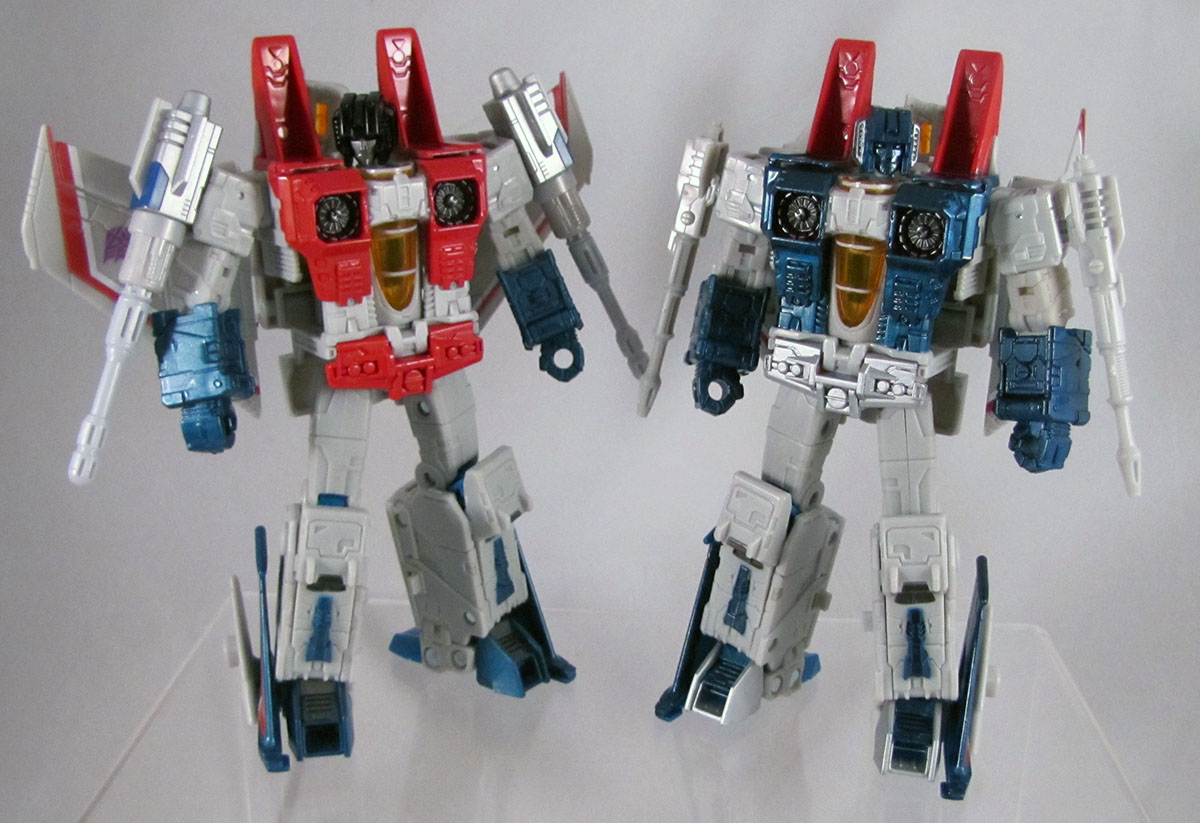 I have two.  I bought a second one to paint up in Early Marvel Comics Starscream colors, from back when the interiors colorist was working off early Starscream model sheets where his chest was black instead of red.  I got halfway through that one and realized, yo, if I stop here, I've got a toy colors Starscream, with darker blues instead of the cartoon's brighter blues.  It looked nice, so I kept it there!  I also gave him Classics Starscream's null ray arm cannons, because I like them bulky.  ...and then I painted my back-up ER Starscream toy in the Early Marvel scheme.  Y'know, comics blue-for-black chest, blue head and face with white eyes, inverted colors on the feet...  And I fold the wings back out of view, since Mike Manley didn't draw them in issue 9.

no i'm not gonna lop off an ear, jose delbo drew him earless only after the color scheme was updated