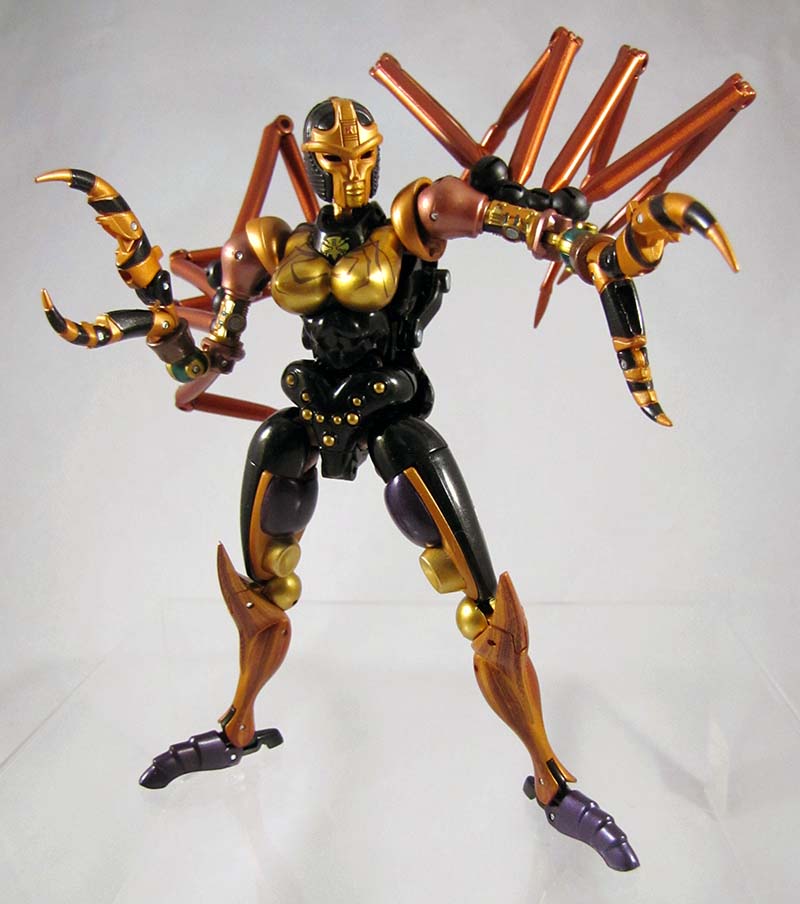 Hey, did you know that Masterpiece Blackrachnia's boobs are actually smaller than original toy Blackarachnia's boobs?  Hard to believe!  I mean, technically they started out being Tarantulas's pecs and looked more like a pair of golf balls, but it's somehow true!

Anyway, here's MP-46 Blackarachnia.  She's about the size of a large Deluxe Class toy.  (She's practically identical in size to Animated Blackarachnia, for example.)  I mean, you can tell she costs more just by looking at her -- she's ... a lot of paint and her parts count is massive.  But this is what size Blackarachnia's gotta be if she's gonna be in scale with everyone else in the Beast Wars Masterpiece range.  She wasn't a large gal!  The shortest character on the show, actually, ranking below Quickstrike, Rattrap, and Scorponok. 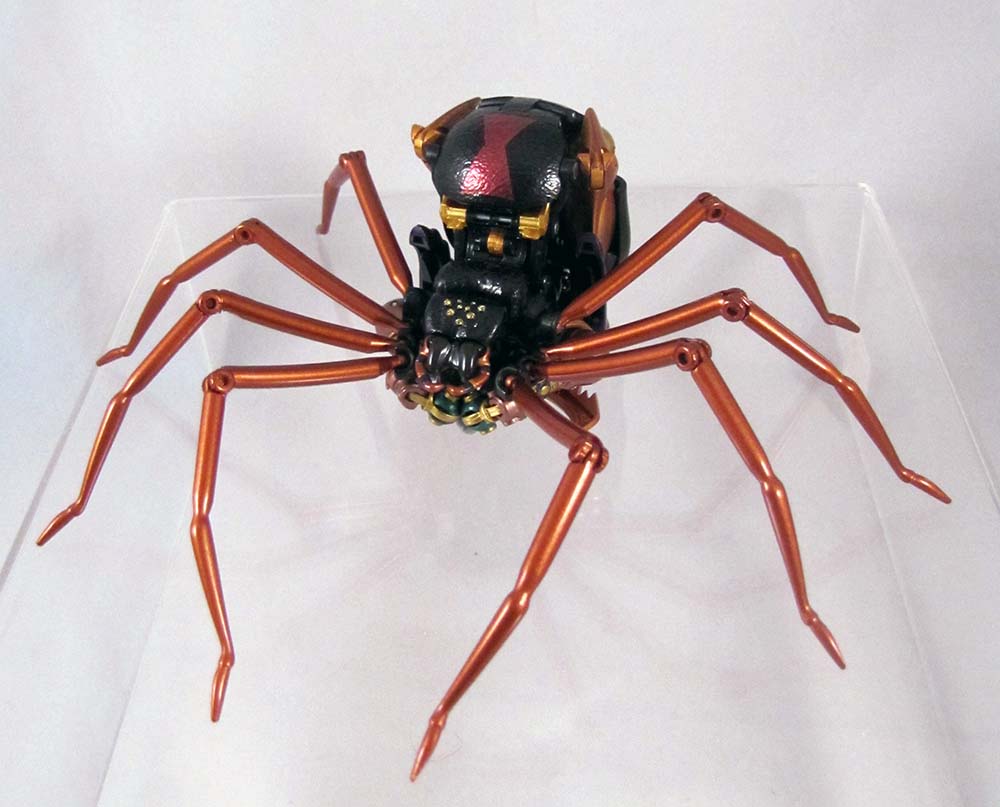 Her size is relevant insomuch as she has to transform from one thing into another thing, and the two things share essentially zero parts.  Masterpiece Dinobot was also like this, and what he did to get from velociraptor to robot was... turn entirely inside out.  He was a Popple.  But he could do this because he was massively large.  There was enough of him that he actually could turn inside out.  Blackarachnia, though, uh.  She be small.  There's not enough of her to do what Dinobot does.

Obviously, by looking at her, the robot mode's accuracy was emphasized.  In robot mode, she's a perfect action figure of the CGI model.  The only thing that's even a tiny bit off is the exact curvy shape of the spider abdomen stuff on her back, and even that's getting picky.  It's hard to tell that she even transforms into something, at a glance.  She's got spider legs on her arms and that's it. 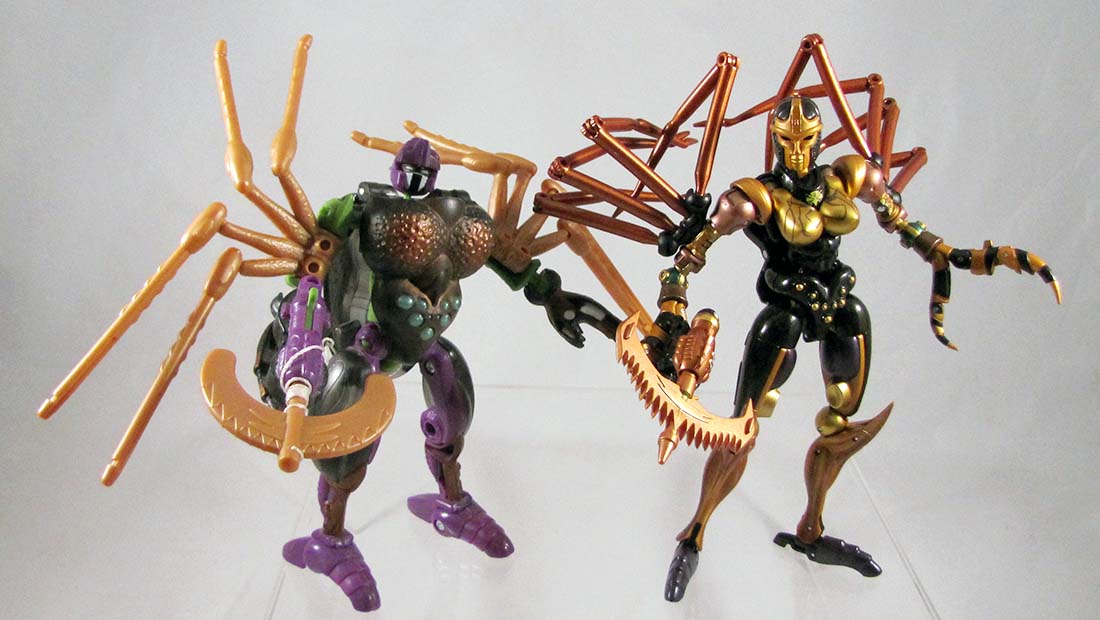 The spider mode is definitely where all the compromises landed.  Her tiny head and thorax sit atop a massive pile of robot mode arms.  Her robot mode legs are too large to tuck entirely inside her spider mode abdomen.  The thing is, there's just not anywhere for all this stuff to go.  Her two modes are largely incompatible, and she's too insubstantial to be as creative with the transformation as one'd like.  Cramming all the accuracy into the robot mode seems like the best idea between "favoring robot," "favoring spider," and "making both look bad."

Blackarachnia comes with one stand square (Dinobot came with two squares), a support arm for the stand, four web parts that combine with each other to form a complete web and attach to the support arm, and an attachment piece to help you connect Blackarachnia to it in various ways.  This stuff is larger than the toy itself, so even though Blackarachnia is pretty small, you get a big chunk of plastic. 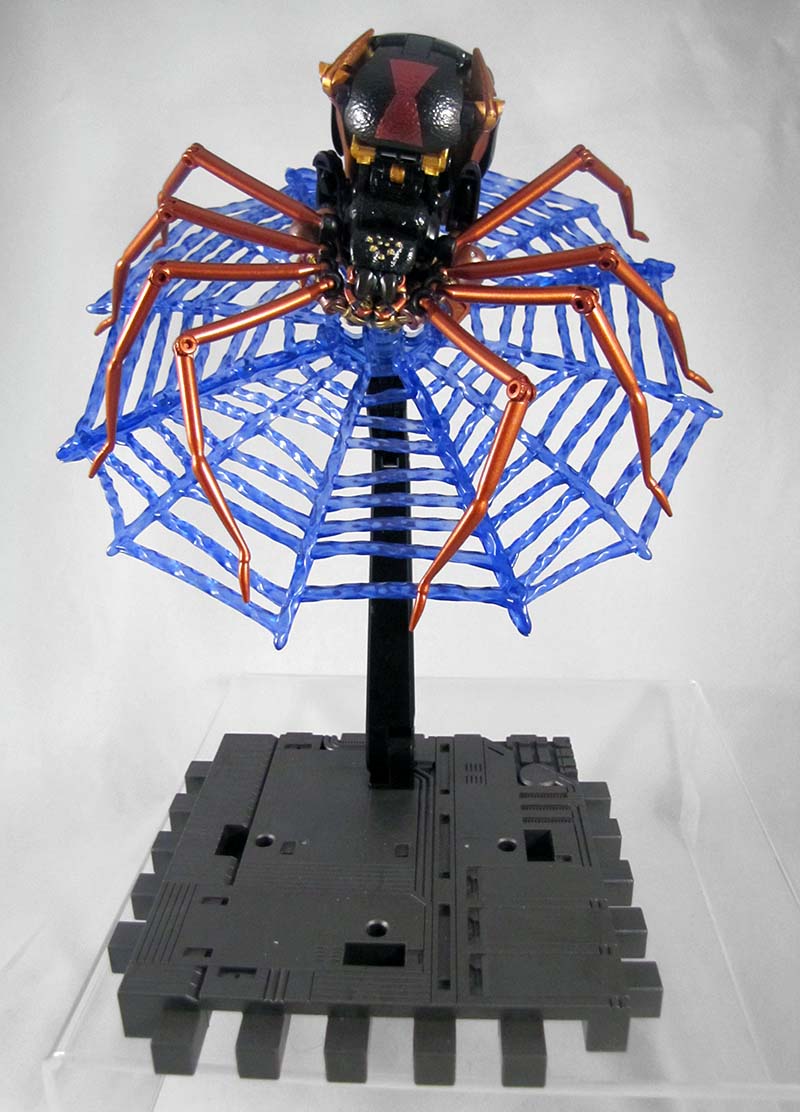 There's also two alternate heads (nigh-identical smiling and laughing-while-green-eyes-glowing), a harpoon that attaches to the harpoon weapon that forms out of part of her abdomen, a second harpoon attached to a string which you can use to swing or hang Blackarachnia from, and a VR mask attached to a wire and a separate extra wire.

Masterpiece Blackarachnia is a small but incredibly intricate toy that transforms from a 100% perfect robot mode (which is extremely poseable) to a spider-mode that looks okay if you haven't put your contacts in yet, comes with a few extra faces, a large diarama stand, and some weapons.  How much you want this for the price she asks depends on how much you dig Blackarachnia.