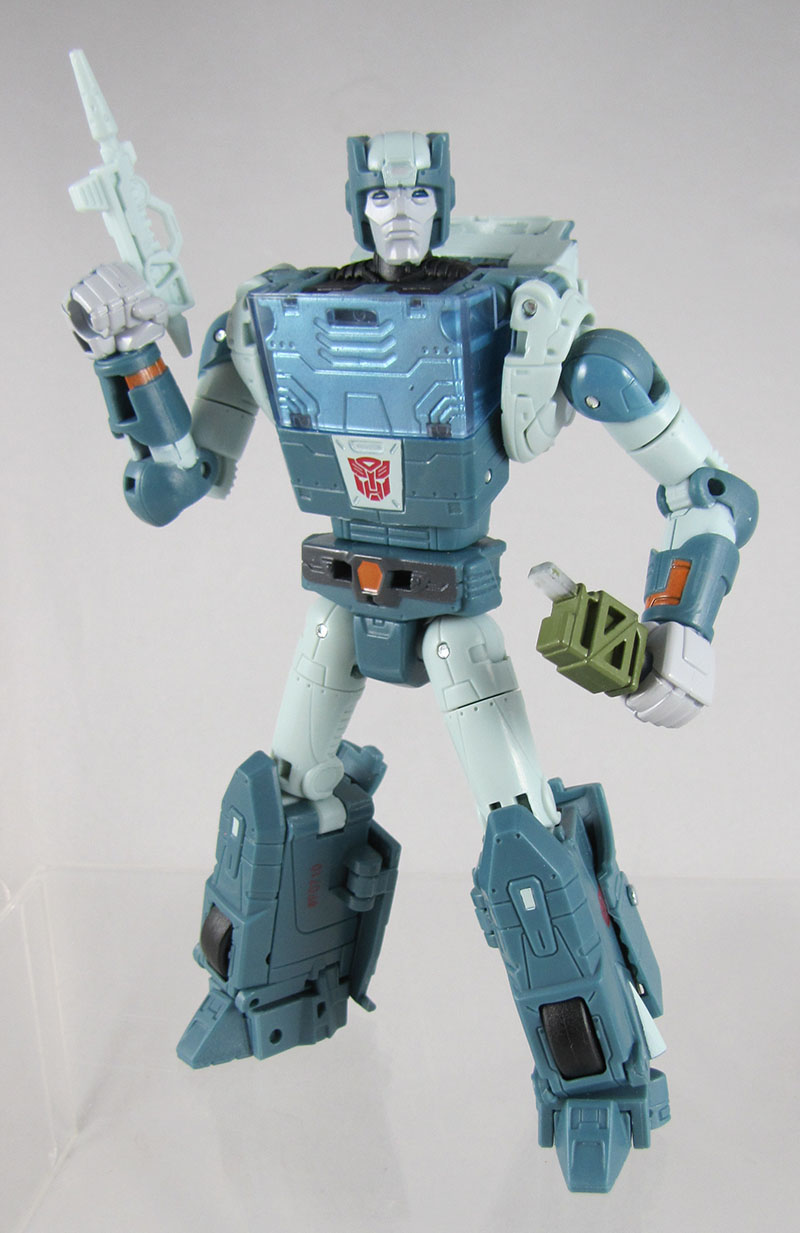 They just really have trouble replicating Kup's head in plastic, don't they?  Every single time it just looks a little off.  Maybe it's the need to put bags under his eyes that sets everything else off, I dunno.  It wouldn't be so surprising this time around if Studio Series '86 Hot Rod's head weren't so absolutely spot-on.  But Kup (and Blurr a little bit) noteably miss the mark when next to Hot Rod.

Anyway, it's Kup!  I love Kup.  Always have.  I'm sure a lot of that is me having a Targetmaster Kup toy when I was a kid moreso than me being drawn naturally to Old Robot Grandpas Who Transform Into Sort Of Pickup Trucks And Have Terrible Names.  But he's teal!  Either a bright teal or a washed-out teal, depending on if you're going for animation-accurate or original toy-accurate.  Teal with orange highlights?  Yeah!  Do that to me!  Do that to me in toy form! 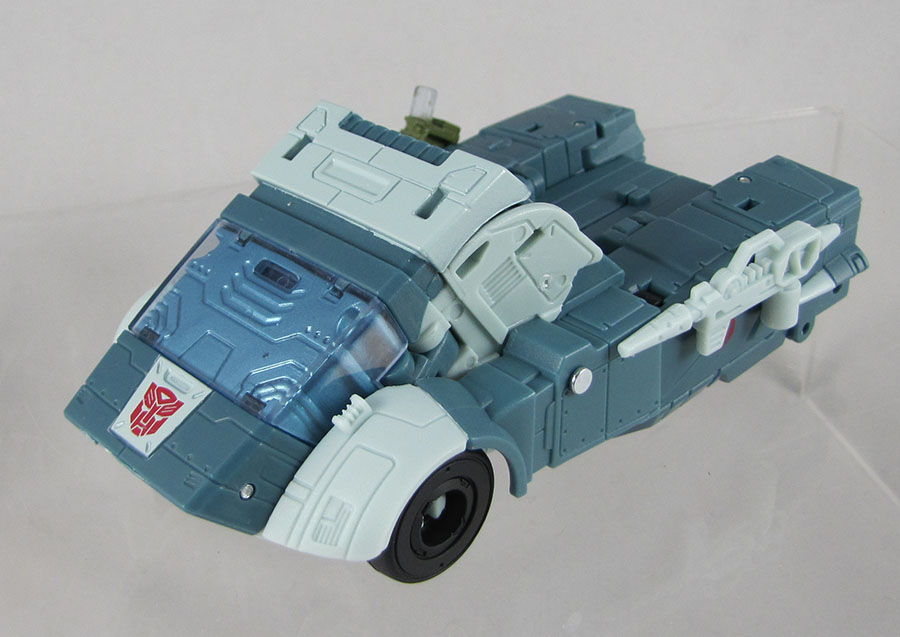 Since '86 Kup is supposed to be faithful to The Transformers The Movie, he of course transforms from his animation model truck to his animation model robot.  (with a larger chin than necessary, honestly)  There's a lot of interesting ideas in his transformation, though the execution is a little tedious.  In truck mode, he ends up shoving his arms through his crotch between his legs, which is a place to put his arms that allow them to be Not Short, since the original toy just bunched them up under his own chest.  But you got to fasten a few panels together over all this arrangement, and that's the Not So Fun part.  I mean, it's not the worst.  Transforming Kup's second toy, the first Generations one with the giant rifle -- that's the worst.  But the Titans Return/Legends Targetmaster one managed to do a similar design but was much more fun to convert. 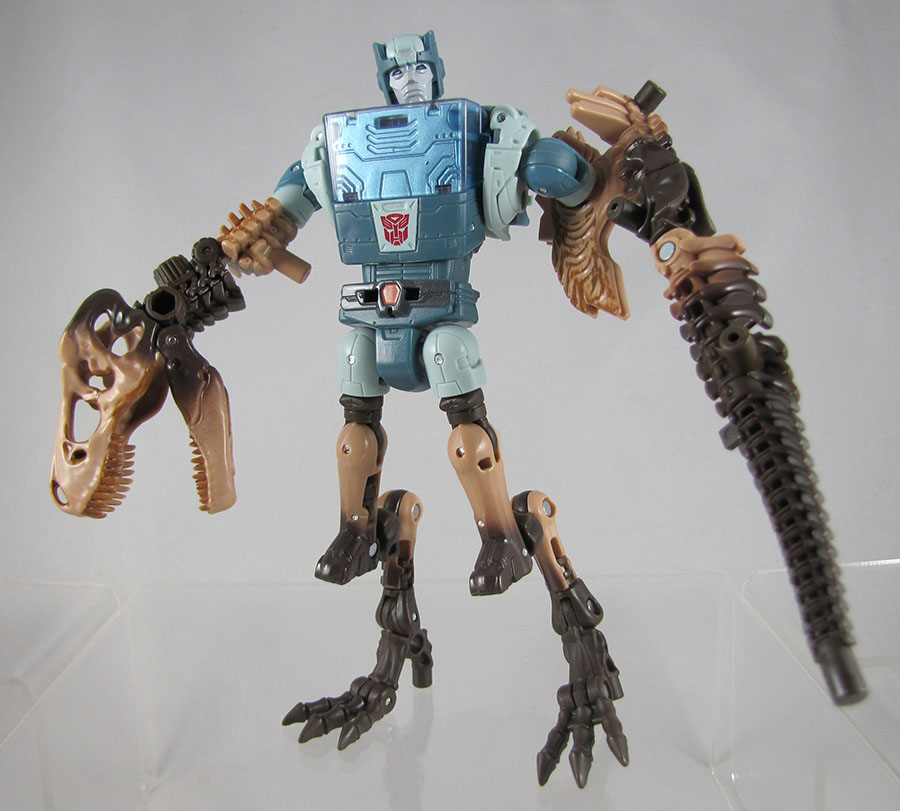 Kup comes with both his animation-accurate gun and a container for Energon goodies to feed Allicons.  The container fits into the top of his fist with a 5mm peg, and both it and the gun slot into the side of the vehicle mode using much smaller pegs. 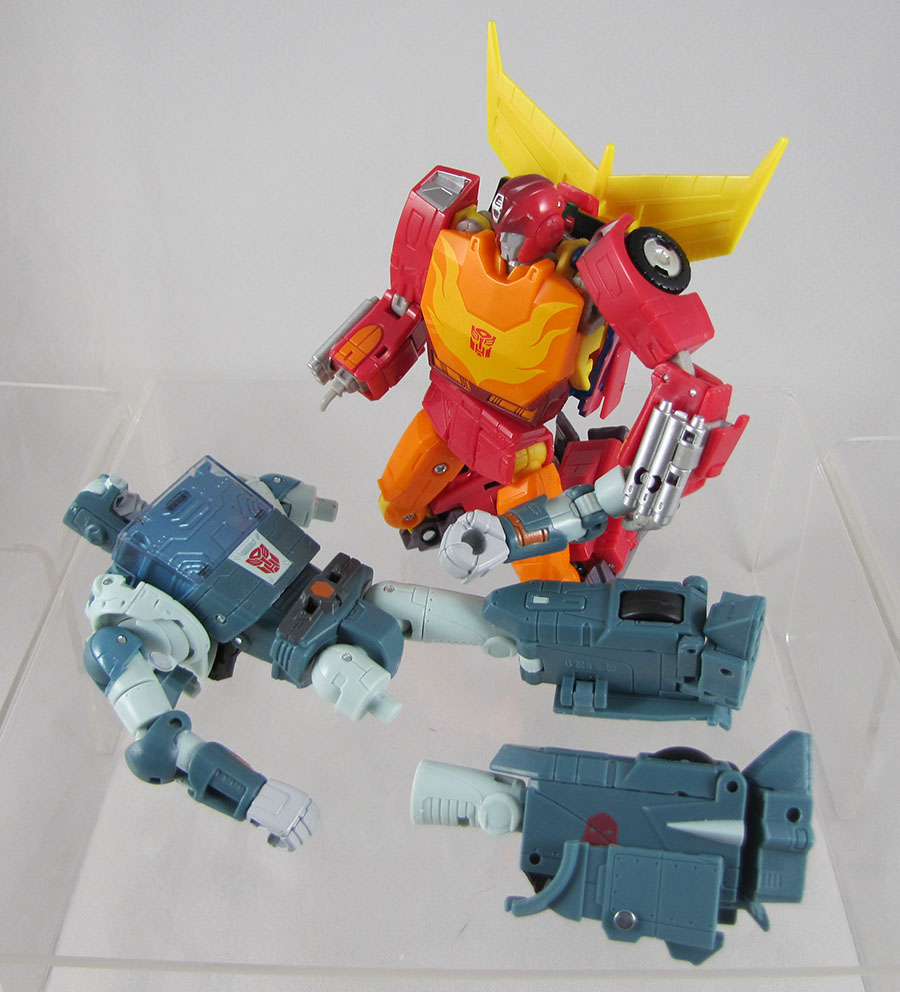 Kup's arms and legs also come off at the mid-bicep and mid-thigh areas so that you can replicate the scene in The Transformers The Movie where Hot Rod has to rescue him from a giant robot squid and then repair him.  (Hot Rod's toy can swap out one of its fists for a welder torch for this same thing.)  This is neat, but what's most neat about it is that everything is done with 5mm pegs so that you can do all sorts of nutty stuff using Weaponizers and Fossilizers.  Want to give Kup a T.rex arm?  Of course you fucking do.  Do it.  Give him a T. rex arm.

That's what this new Kup is really for.