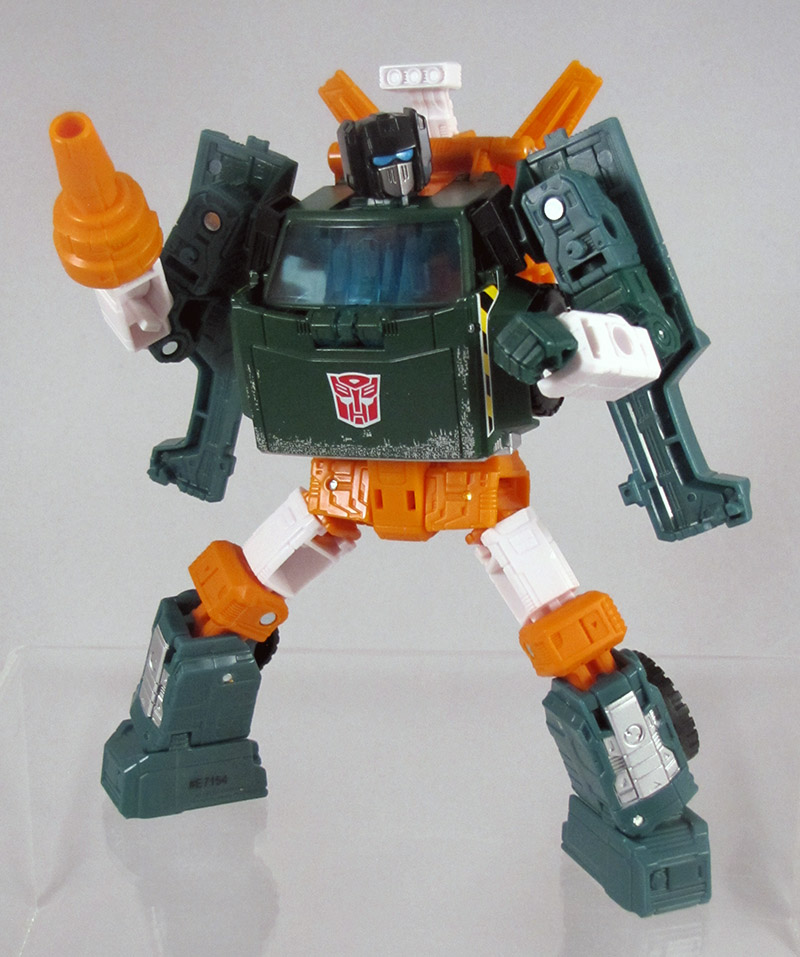 Dangit, Stege is over, and so now it's EarthRise time.   I'm going to miss Stege, because I liked calling it Stege.  It's just fun to say and fun to type.  EarthRise is just EarthRise.   And you gotta abbreviate it as "ER" which always makes me think of George Clooney.  Goodbye, Stege.  You were too Stege for this world.

Check out Hoist!  That's right, he's mistakably an Earth truck, because, well, EarthRise.  The toyline is, in theory, on Earth.  And so he's not just an Earth truck that Hasbro tells us is a Cybertronian vehicle, he's properly an Earth truck.  And because this is Hasbro in the late 2010s to early 2020s, he's an Extremely Eighties Earth truck.  He seems to be a Toyota Hi-Lux pickup, same as the original toy.  Or at least a Close Enough But Not Too Close That We Gotta License It version.  Which is fine to me if only because I prefer boxy vehicles 'cuz they're way easier for me to draw.  They're just rectangles.  None of those pesky curves. 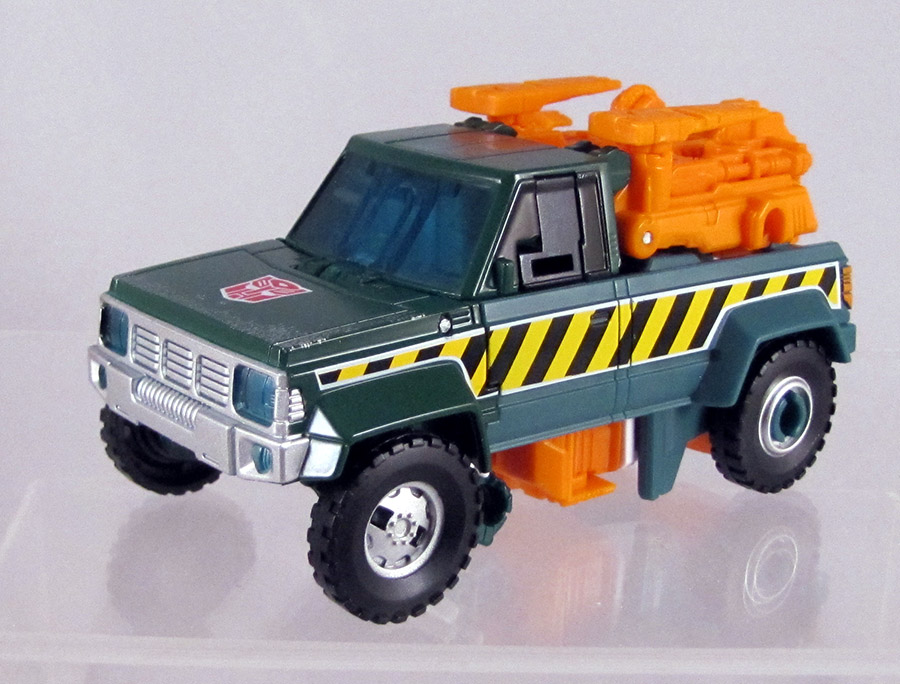 The original toy had a little platform that lowered down off the bed of the truck to help Hoist tow other Transformer cars.  This is equally true for the new EarthRise Hoist, but specifically with Rest Of The Toyline compatibility!  See, Earthrise's "other than transforming" gimmick is "there are bases with interconnecting ramps."  And Hoist's towing platform thing is compatible with the ramps.  And so you can lengthen the towing platform with a piece of ramp, or connect it to a base and drag the base around, who knows.  It connects.  Connecting is neat. 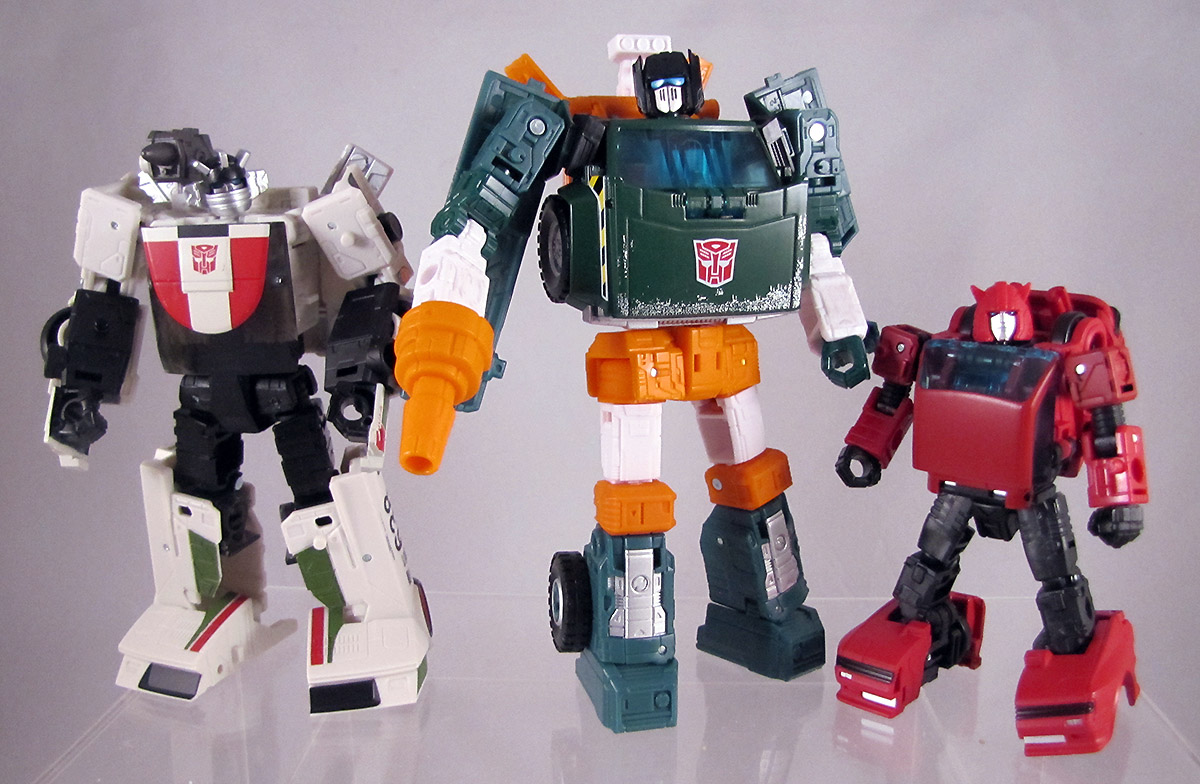 Hoist's truck transforms into a... properly huge robot.  EarthRise continues Stege's commitment to adhering to cartoon robot scale, even if it results in large variations of robot size within a single size class.  Hoist is on the high end of the spectrum of Deluxe Class toys.  He's about the size and heft of Stege Ratchet and Ironhide.  They're all trucks and vans, so they're bigger than the sports car guys.  (but not quite big enough to rate being Voyager Class)  This is very satisfying to me, since the previous Hoist toy, from Thrilling Thirty, was a pretty small Deluxe.  For Deluxes, he was eensy!  And this won't do.  I mean, I'm gonna keep that toy, since that's the Lost Light design for Hoist, and I gotta Lost Light shelf display, but it's nice to have a Hoist that's Rightfully Huge next to, say, anybody else.

Since Hoist is obviously gonna be retooled into his pickup truck buddy Trailbreaker later, his robot mode is a compromise of their two designs.  He keeps the toy-accurate truck kibble hiding behind his arms that Hoist's animation model had, while borrowing Trailbreaker's legs.  (Trailbreaker and Hoist, despite being drawn from the same toy, had animation models designed by two separate artists, and so their cartoon/comic appearances were more different than you'd think.) 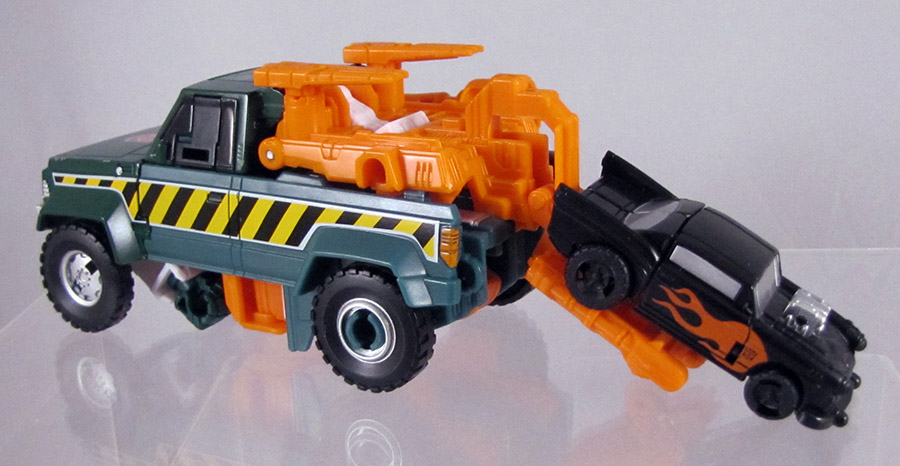 Hoist comes with an orange nozzle you can fit over one of his fists so he has his gun arm.  He's also got the standard articulation you'd expect from a Stege or (apparently) EarthRise toy, including ankle tilts, waist rotation, and all the other little movement spots that are now expected.  ER Hoist also continues Stege's seeming commitment to straightforward, non-reason-for-murdery transformation sequences.  It's a pleasurable encounter going back and forth.

He's a hefty boy and I like him.  All I need is a tiny Brick Springhorn figurine to complete him.