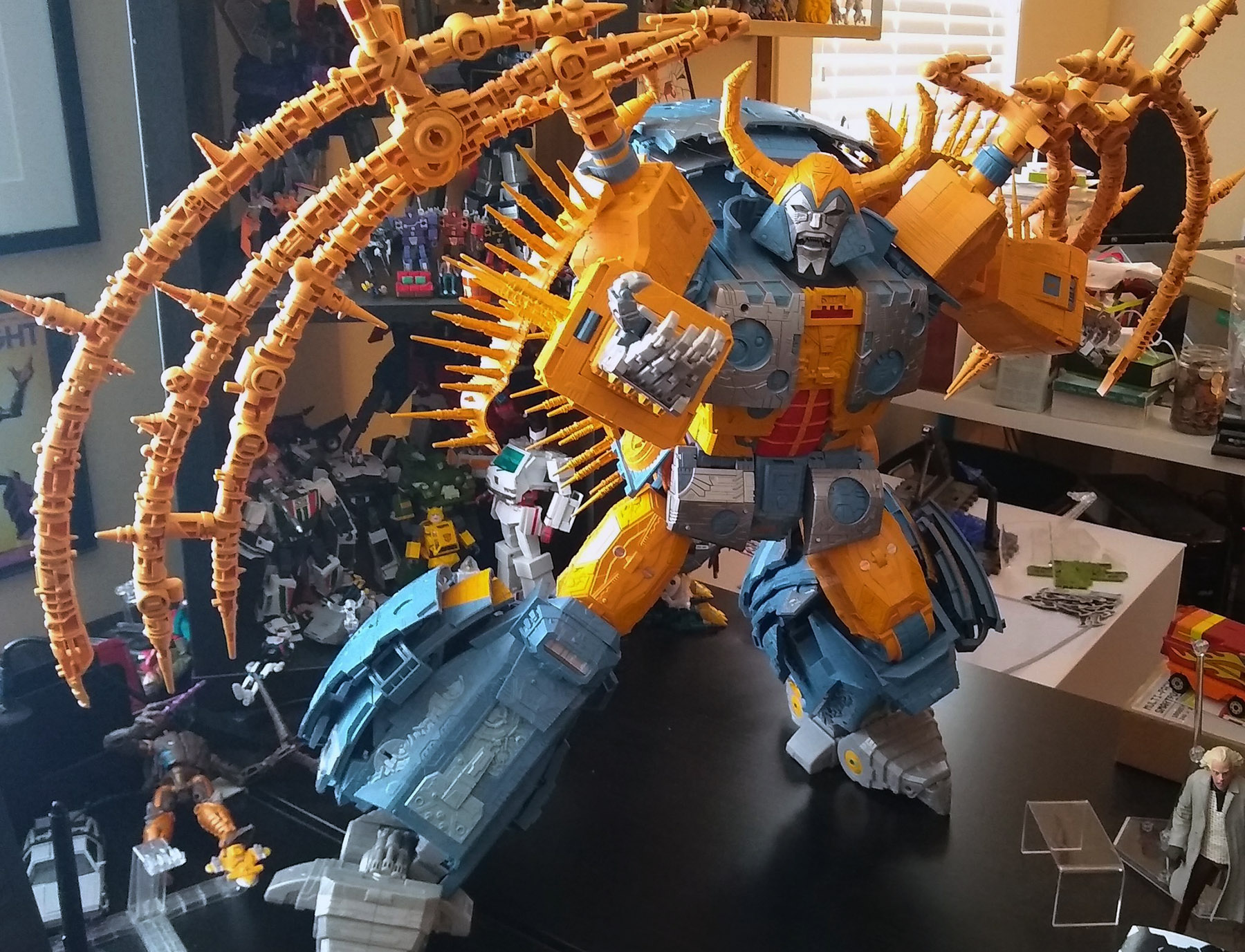 Okay, let's try to actually write something down here.

Haslab Unicron is goddamned massive.  I know every other disbeliever on the Internet for two years was all "lol he's just a few inches taller than Titan Class Fortress Maximus," but seeing him in person brings up that ol' Pizza Equation.  See, a large pizza actually has twice the area of a medium pizza, even though the diameter's just a few inches more.  Things can be bigger in more than one dimension, and that's where the calculus is off.

You have to back up a few feet to actually see all of Unicron at once. 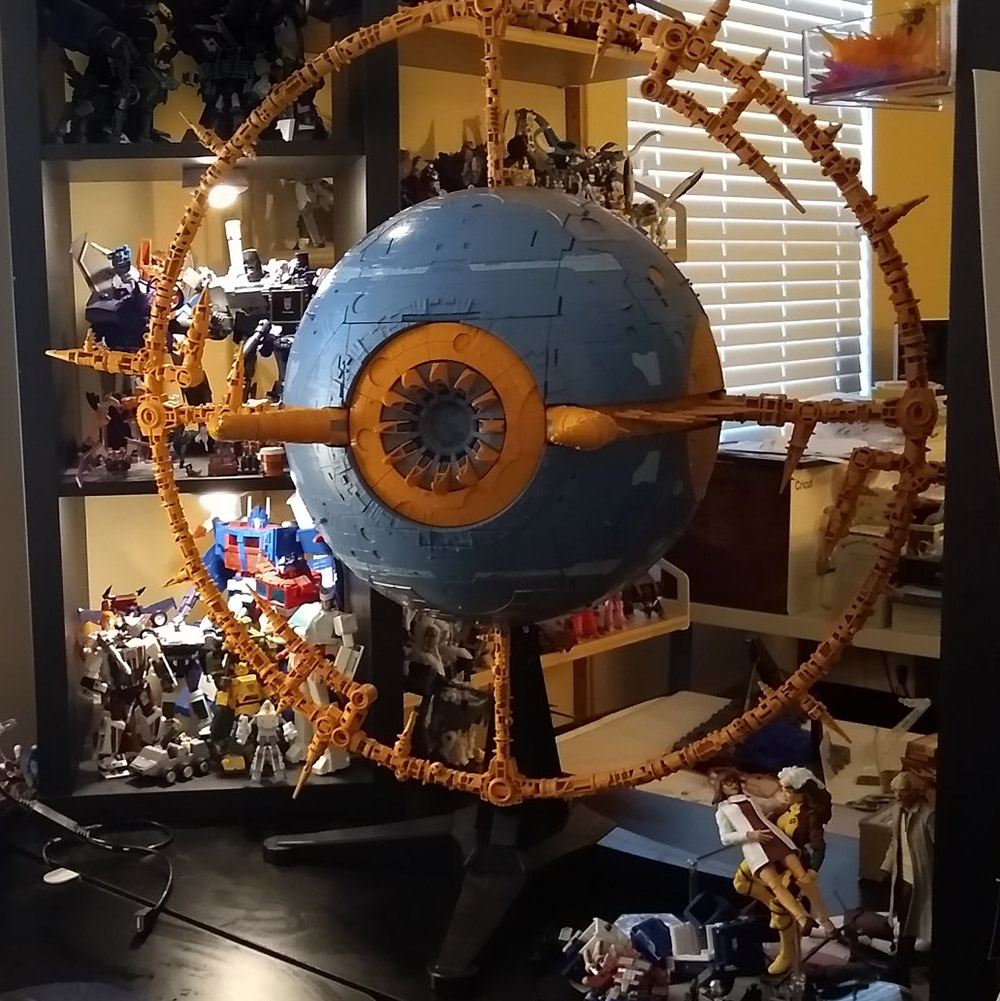 That's why it's hard to, like, focus on something about him you might dislike?  Oh, is the backpack of planet plates too big?  Honestly I have to be reminded it exists, because this dude is overwhelming my senses.  I look at him, focus my eyes on his face and chest, and have to actively dart my eyes around to find other shit.  He is a three dimensional object, and photographs just flatten him to the point where they're worthless.  Again, he's got a backpack?  Yeah, sure, like eight inches behind where his torso is.  That may as well be in another state, as far as field of depth means anything.    You take a photo of him, and you don't get the actual experience of seeing him. 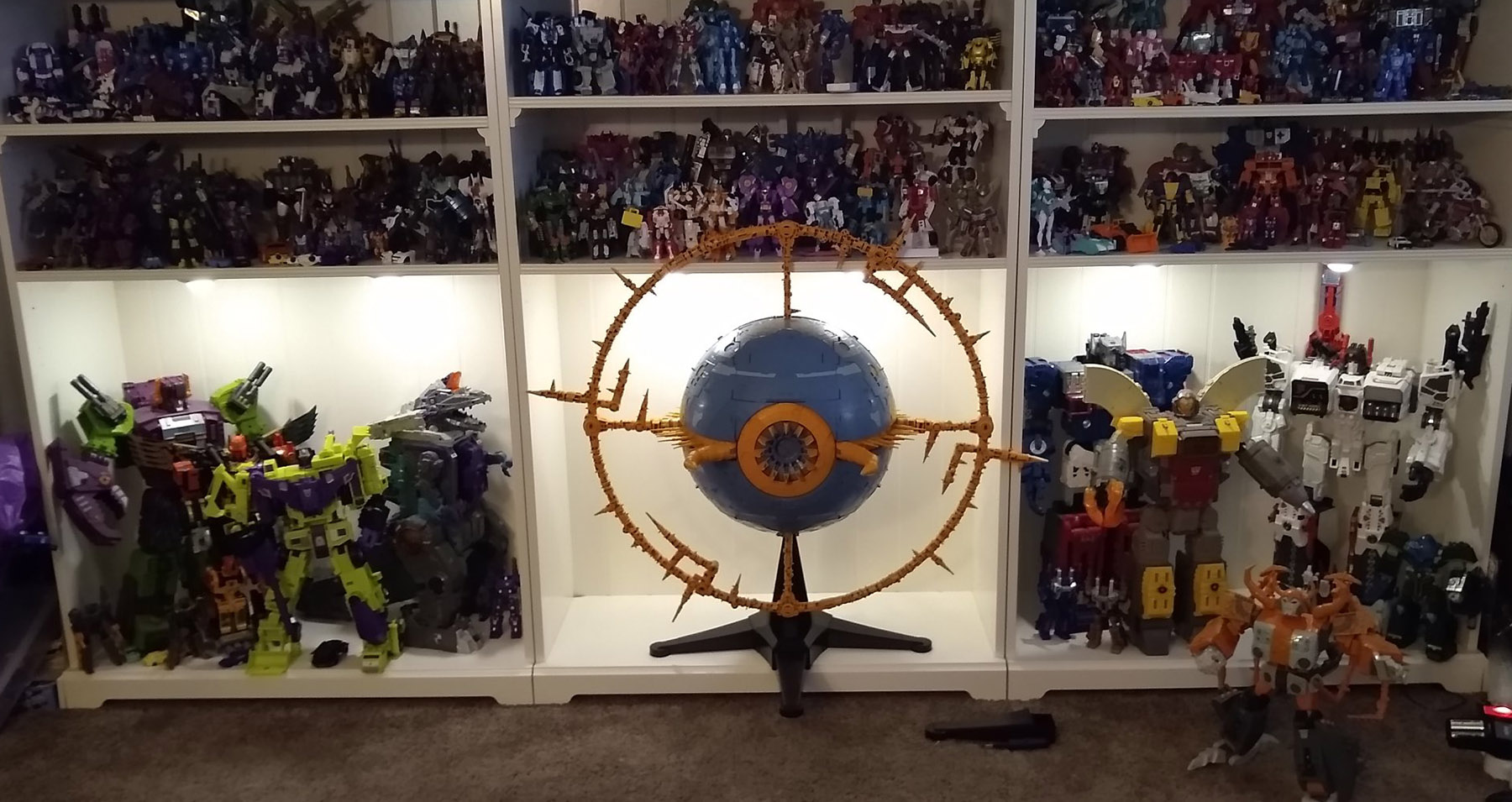 Transforming him requires all the upper body strength you have.  Even with him on the stand, up on his shipping box (which you will need to keep around to help transform him), you're going to need some good biceps.  And it takes a while.  And it's not very pretty for most of it.  Lots of planet slabs, and they all pile up like lasagna on his legs and back.  Everything fits together perfectly when you're done, but until then it kind of hangs there.   It's a literal juggling act until everything eventually snaps into place.

Unicron fits on my desk, but my desk was already primed to fit two Titan Class toys at once (Scorponok and Fort Max).  He takes up the same space they took up, together.  At some point in the future where I'm ready to move him off my desk, there's a spot in my shelving in my office.  It's IKEA shelving, but it's not a Billy.  Unicron would not fit on a Billy.  He definitely isn't going to fit inside or even on top of a Detolf, despite a handful of folks getting one of those for him in anticipation.  No, mine's a larger unit, a LIATORP, and the lower third of that unit is 35"x30", with a depth of 15".  He fits into that space just barely in robot mode (if he's off his stand or you unscrew the back leg off of the stand), and absolutely won't fit in planet mode.  If he's in planet mode, he has to go on my desk.   Again: Fucking huge. 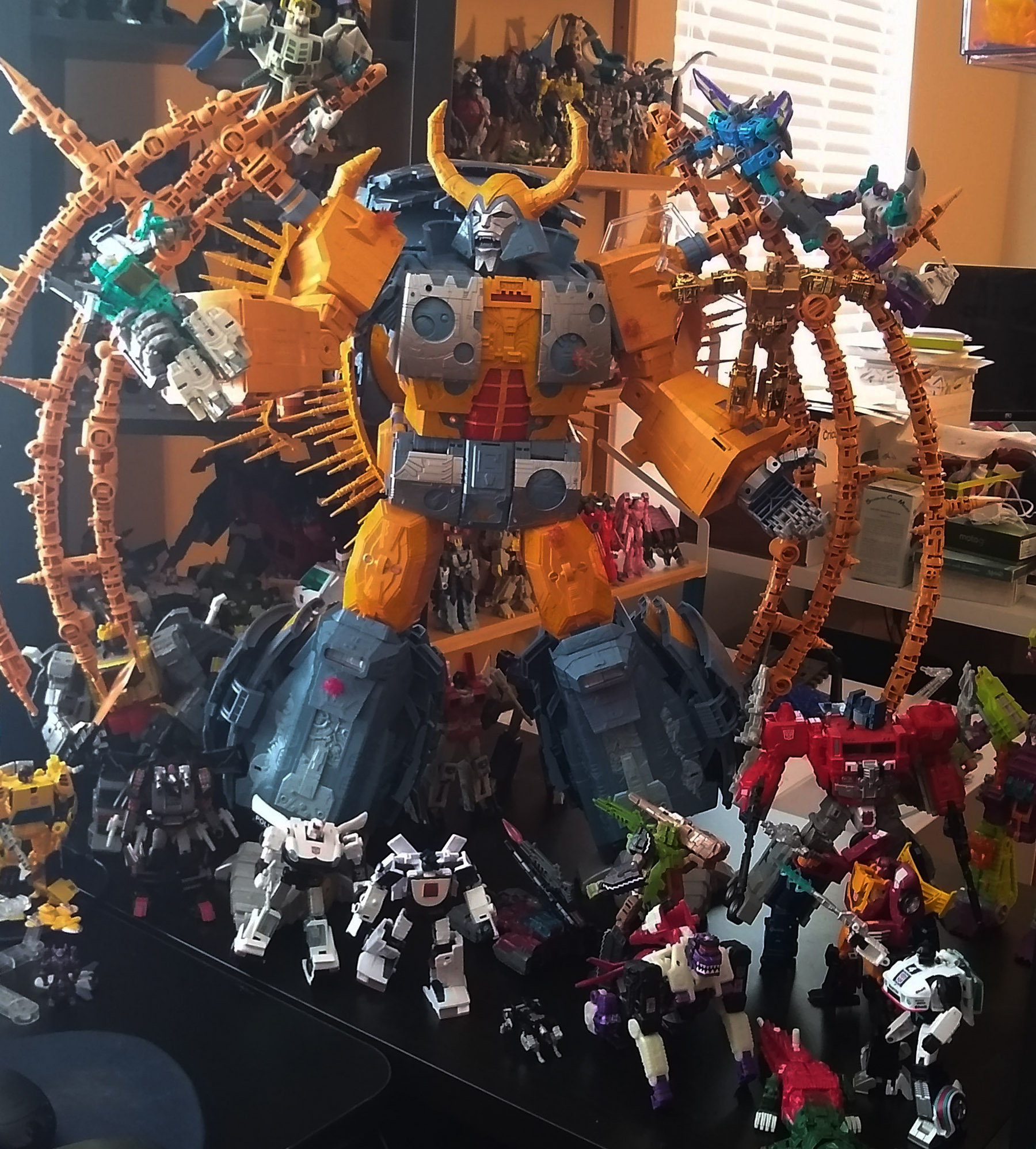 I'm almost entirely talking about size, but this is honestly what I wanted.  I wanted the largest Unicron Hasbro could give me.  Any larger than this and we probably start bending physics without collapsing under its own weight (or comes shipped in a box too big to fit through a door).

He comes with some extra stuff.  The unforked chin is what he comes packaged with, but you can swap out that chin for the forked one and then forget it exists.  There's also a busted up face you can replace the rest of his face with, for replicating those post-movie episodes where his disembodied head orbits Cybertron.  Both the chin and the extra face can be stored underneath the stand.

There's also an Autobot shuttle, centimeter-tall Rodimus and Galvatron microfigures, and a stand for all three of those guys and the head when it's removed.  The stand has room for later expansion, with slots for future microfigures and probably another spaceship or two.

These are nice, but... the important thing is...

I'm extremely happy with him.