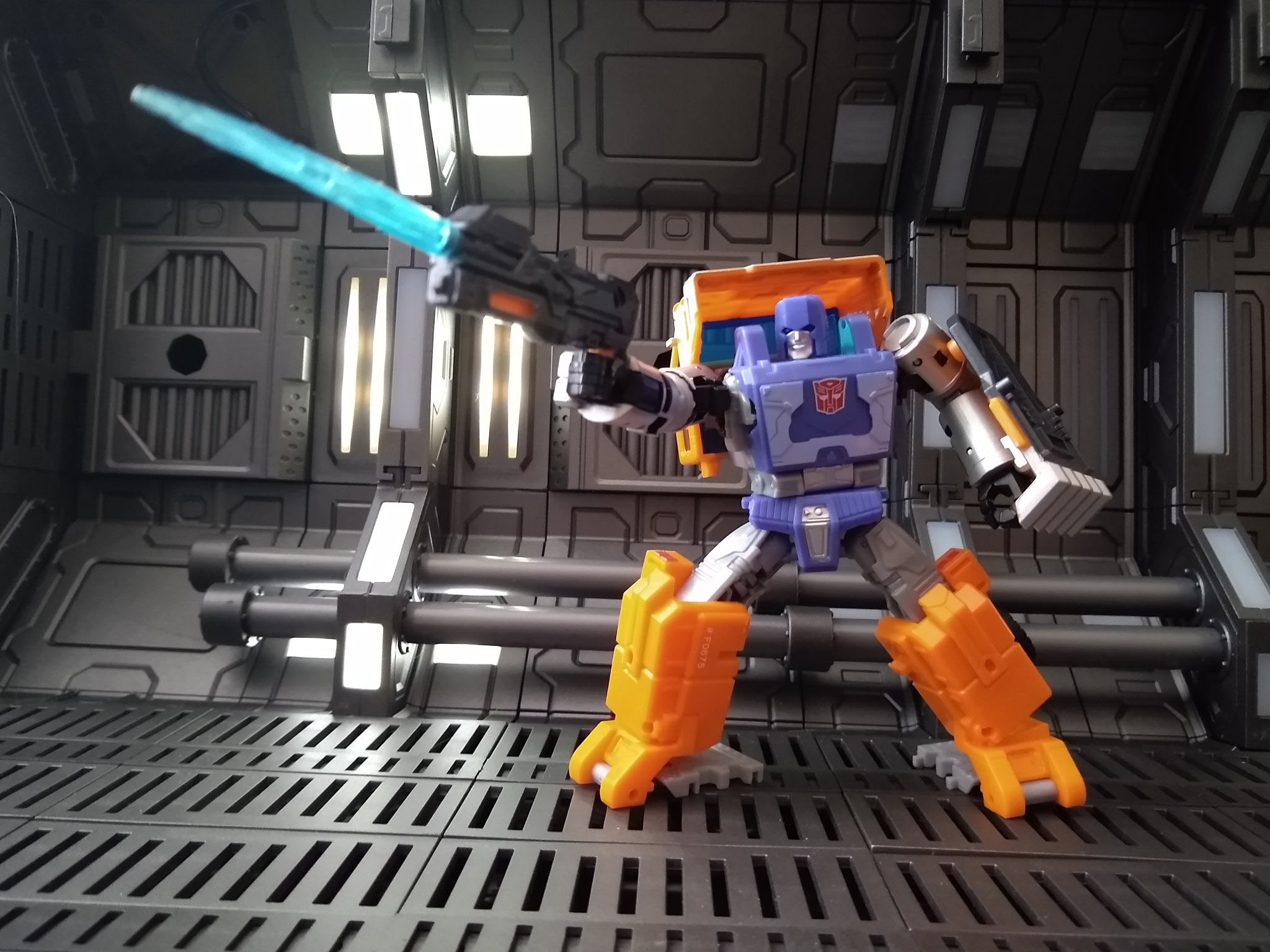 Huffer was one of my favorite Transformers when I was a kid.  This happened because 1) he was a toy I owned and 2) he was featured in one of my first comic books.  In the cartoon, Huffer sounded like if Mr. Slate from The Flintstones were a whiny Peter Griffin, and in general he just wants to go home even though he can't.  He was a little orange forky-handed minitruck, he made reluctant friendships with big meaty trucker humans named Bomber Bill, and I loved him.

Kingdom Huffer is the first attempt by Hasbro to actually try to make a new Huffer that's named Huffer?  In Transformers Cybertron, there was Armorhide, a new Huffer in all but name.  He was a tiny truck that transformed into a tiny robot with Huffer's head.  BotCon 2007 would do that toy in the proper colors and connect the rest of those dots, and that one's been My Huffer since then.  There was Power Core Combiners Huffer, which was an orange truck but didn't look much like him except in the extreme abstract.  And there was a redeco of a smaller-scale Optimus Prime toy with a new Huffer head, but that... well, it was a small orange Prime with a Huffer head. 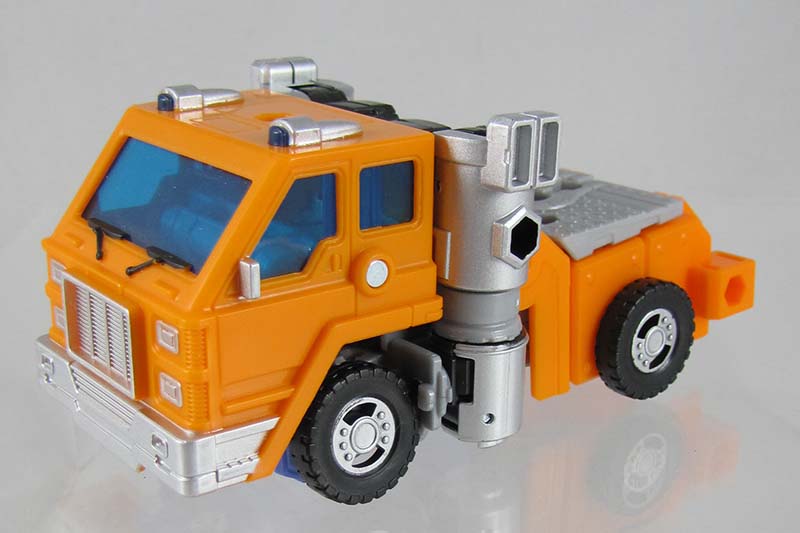 So here's Kingdom Huffer, who's A Huffer!   He's got the entire semi cab on his back, as is appropriate, and his arms still turn into the giant-ass smokestacks (but with humanoid fists at the end, instead of the original toy's sporks), and he's the cartoon's orange and lavender-ish colors.  Like the recent Cliffjumper, Warpath, and Bumblebee/Cliffjumper toys, he's an undersized Deluxe Class toy so that he can be in scale with other recent toys.   He's not quite as short as Bumblebee/Cliffjumper, but he's still a bit smaller than a regular Autobot car. 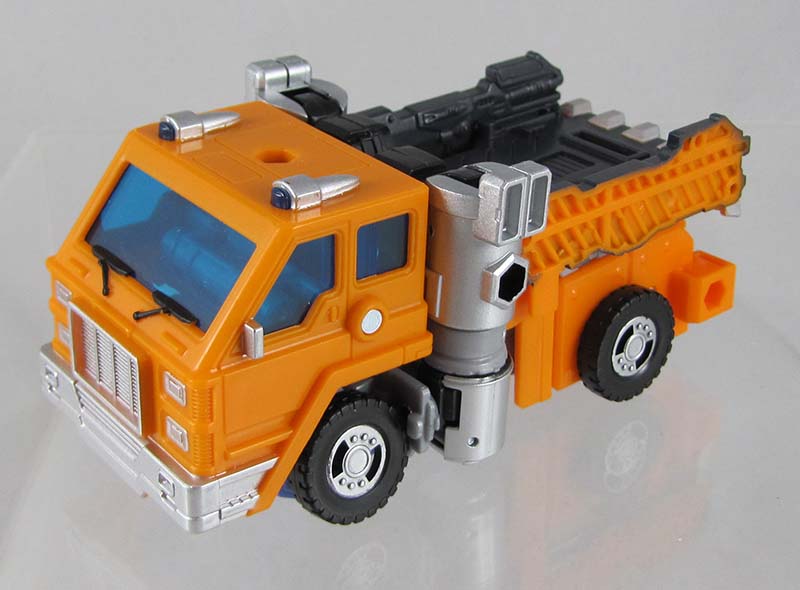 He comes with a shield and a rifle.  The rifle can split in half and join with the shield to form a truck bed for the vehicle mode, if you want.  I've read from others that his rifle is basically a "Spartan Laser" from Halo.  Possibly lightly plagiarized.  Huffer's one of the few 1984 Transformers whose altmode seems to actually be made up rather than being something real that these days you'd have to license, so I guess this "borrowing" is merely checking off that box in a different way.

Kingdom Huffer has a slightly more complex transformation for what you'd expect a Huffer toy to pull off.  You gotta open up his torso, fold the front set of wheels out of his torso (though the hinges there are stronger than the pegs for the wheels, so they pop out a little too easily), configure his arms, fold out his heels into the truck's trailer hitch and... well, okay, it's not that complicated.  Mostly the wheel hiding and the leg folding are the new wrinkles. 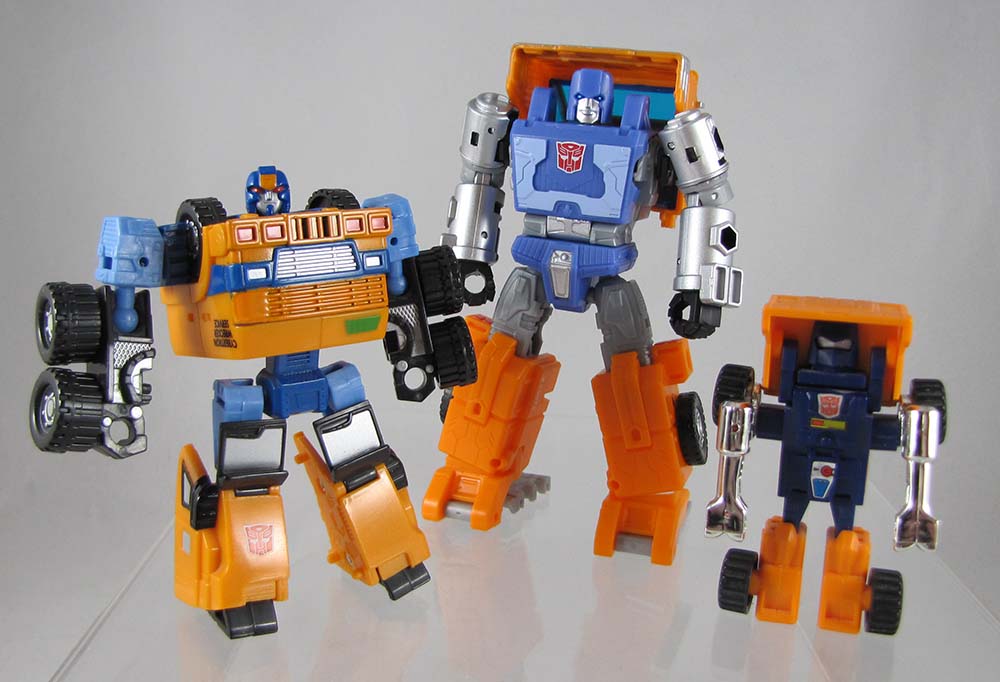 The truck cab backpack is thankfully on a multi-part hinge, because you'll be pulling it out of the way whenever you want to fit your fingers in to turn the robot's head.  And I've got tiny girl hands, so imagine how much more difficult it'd be for real men.  Other than this small roadblock, Huffer is a pretty luxurious action figure for a Huffer.  He's got the now-typical waist rotation and ankle tilts, and all of this is stuff Huffer's never had before.  He can now do sweet action poses, which is apparently something this Huffer is capable of when he's not being a whiny butthole.