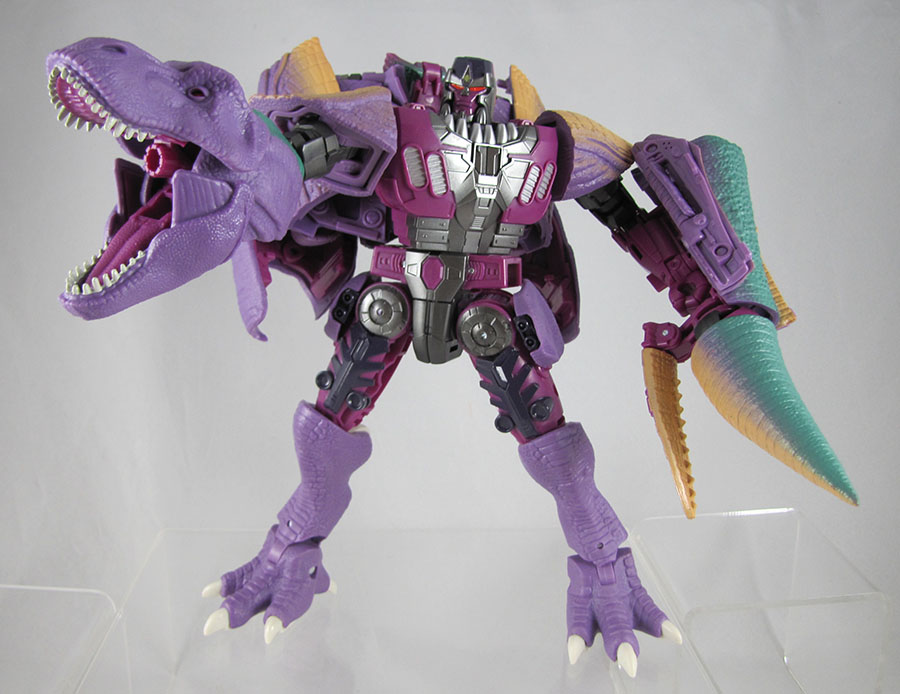 Since a lot of recent Leader Class toys have been Voyager Class Guys With Extra Stuff recently, it's nice to dig into one of the fewer Leaders that are just properly large boys.  Leader Class Megatron (Beast) is one of those boys.  A full head taller than the original 1996 Ultra Class Beast Wars Megatron, our new T. rex Megs is a tower of chonk.

Like Kingdom's other Beast Wars reimaginings, he marries a cartoon-accurate robot mode with a more realistic-looking animal mode.  (The animal mode doesn't try to look like the 1996 CGI but the robot does.)  Megatron's beast mode does attempt something that the smaller toys don't, however -- it tries to recreate the feeling of hide.  Much of the Tyrannosaurus skin sections are a slightly rubbery plastic affixed to a solid plastic interior.  Like an ogre, he's got layers.  Many of the interior plastic sections are cast in a bony white color, and so it has the presentation of flesh over a skeleton.  It's a pretty compelling arrangement, and it makes handling him feel different from other toys. 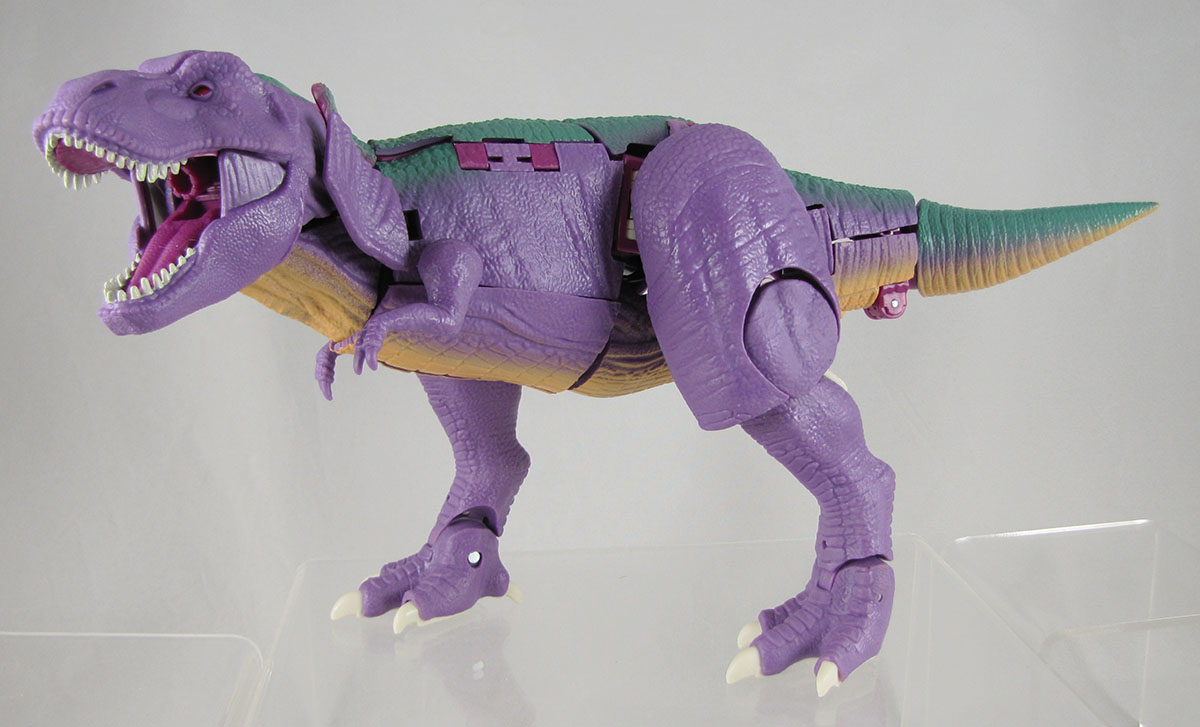 The robot mode rearranges (with some parts clicking together a little too solidly) into a pretty amazing T. rex.  The trade on this is that the robot mode piles more beast mode parts on his back.  The thighs are now back there, too, since some actual Tyrannosaur thighs were wanted for beast mode rather than just the old flat missile-firing cylinders of the original toy.  There's some creative jointing there to allow the thighs to articulate with the rest of the legs while connected. 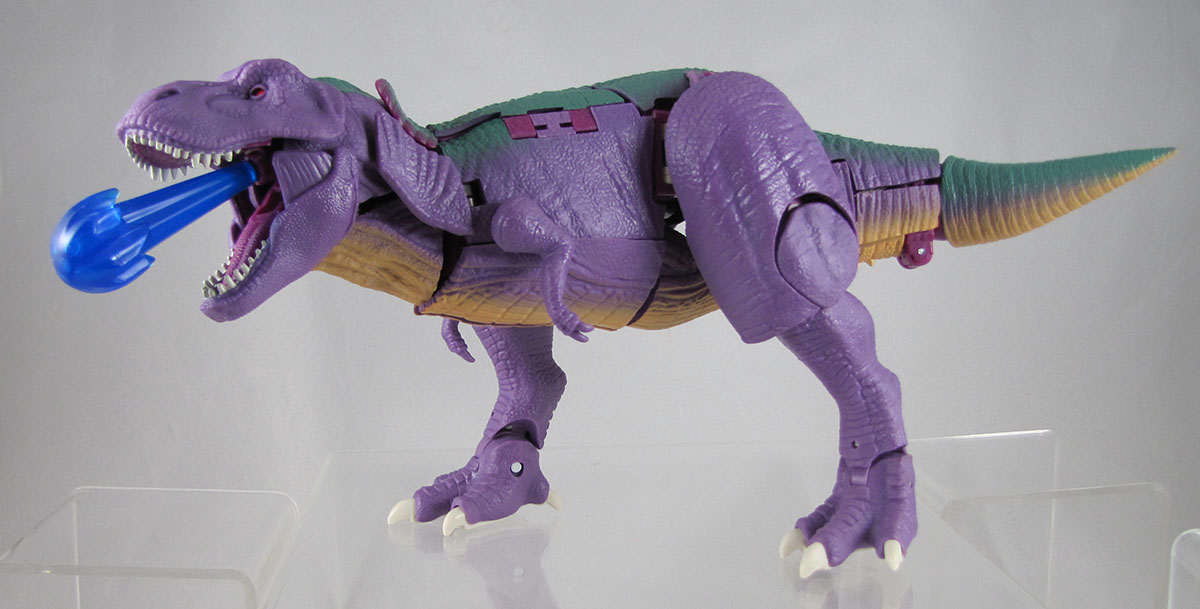 Megatron's robot mode does have a fist sculpted into the tail arm, but the tail itself doesn't separate.  There's no water-squirting bladder in the dinosaur head arm, but there is a 5mm port inside the mouth if you want to add energy effects parts (sold separately).

The toy tries its best to make the dinosaur mode poseable.  There's jointing at the middle of the tail and at the base, giving the tail a chance to sway how you want.  And the dinosaur neck has... lots of stuff going on to make the head be able to move around while keeping fleshy panels filling in the gaps, with mixed success.  There's a springloaded trapezoid of neck flesh on either side of the head, which more or less follows the skull as you move it to and fro, but the unspringloaded panel above the neck has to be manually moved into position each time the head moves.  But I like the effort. 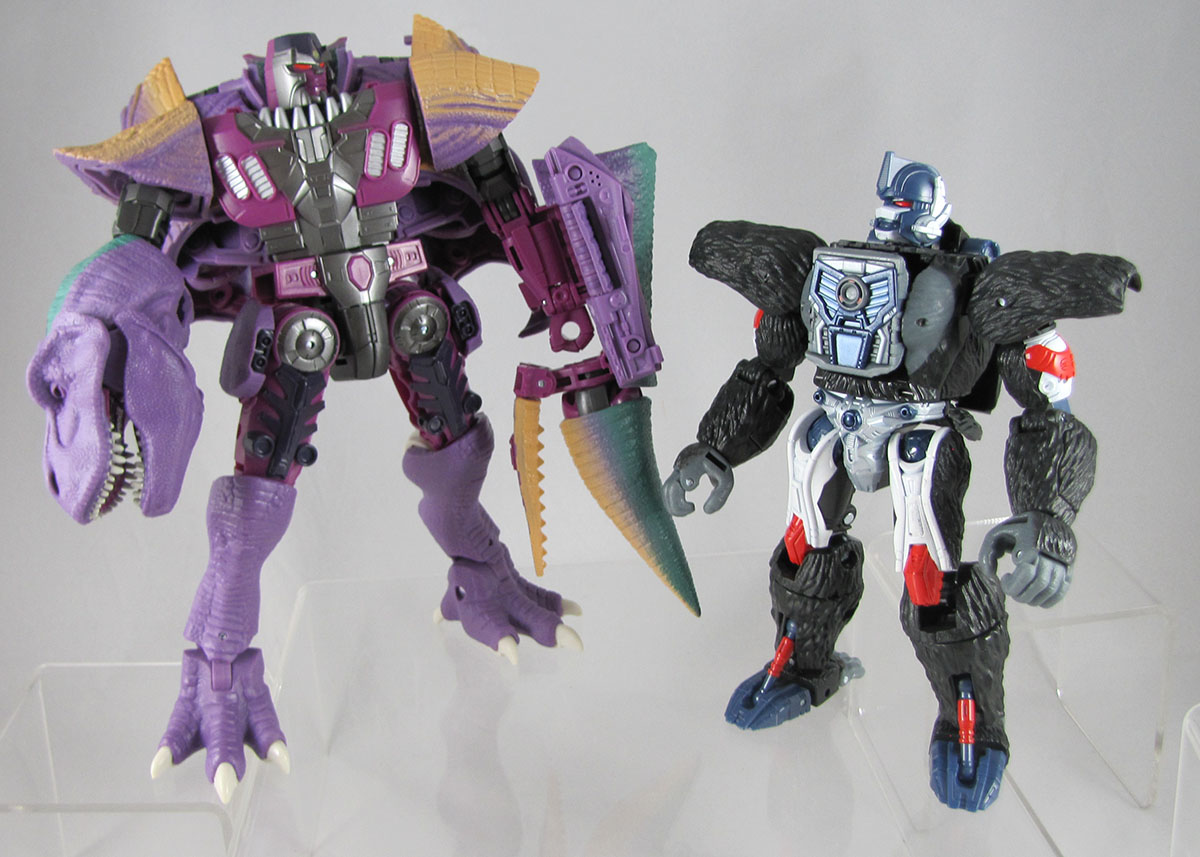 Another change is that Megatron's dino torso transforms upside-down compared to other versions.  The beige tummy coloring ends up on the tops of Megatron's shoulders, rather than the green coloring along the spine.

The important thing is that the toy has a great presence that's equal to Megatron's powerful personality.  It meets the Beast Wars Megatron of the mind's eye, and that's what you pay for and receive.