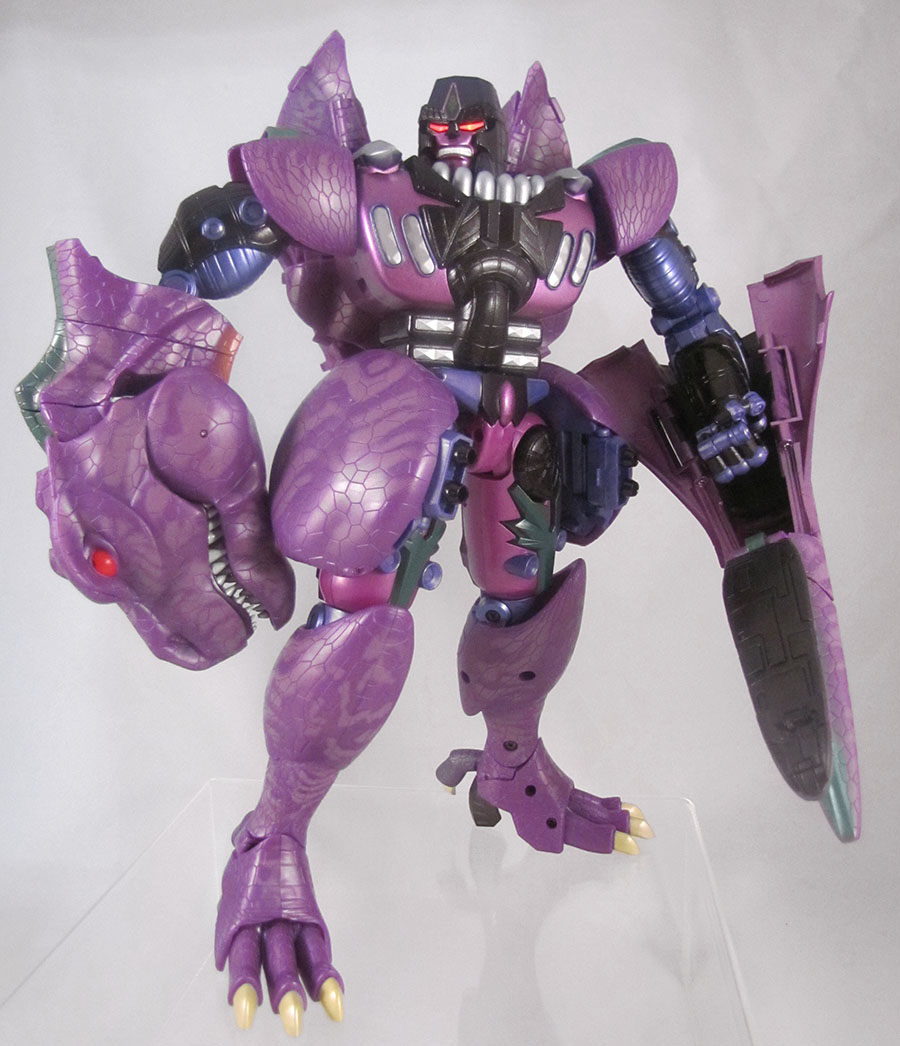 gonna get this out of the way first, but the rubber ducky is a season two thing, and this is a season one megatron toy, so no it wasn't gonna ever come with a rubber ducky and no it's not weird or wrong that it doesn't

Many people assume Dinobot is my favorite Transformers character.  I do like him a lot, and I collect him religiously, but he's not actually my Number One.  My favorite Transformers character is actually Dinobot's nemesis, Predacon Megatron.  Megatron's an intellectual and physical powerhouse whose only weakness is he loves being evil with style and class.  He's not just a jackass, he also enjoys being a jackass, and he wants you to know he enjoys being a jackass.  It's fun to watch him fail, it's fun to watch him succeed -- it's just fun to watch him, which is rare for a Megatron.

So the Masterpiece toy line has finally gotten to my favorite Transformers character, and... it's a big'un.  He's not the biggest Masterpiece toy so far (Ultra Magnus and Star Saber are larger), but he towers a bit over the G1 and Movie Optimus Primes and G1 Megatron.  Masterpiece toys have long maintained a strict robot mode scale, and if you want Megatron to be in scale with Masterpiece Optimus Primal and the nearly-as-large Masterpiece Dinobot, you're going to have a giant-ass Beast Wars Megatron toy. 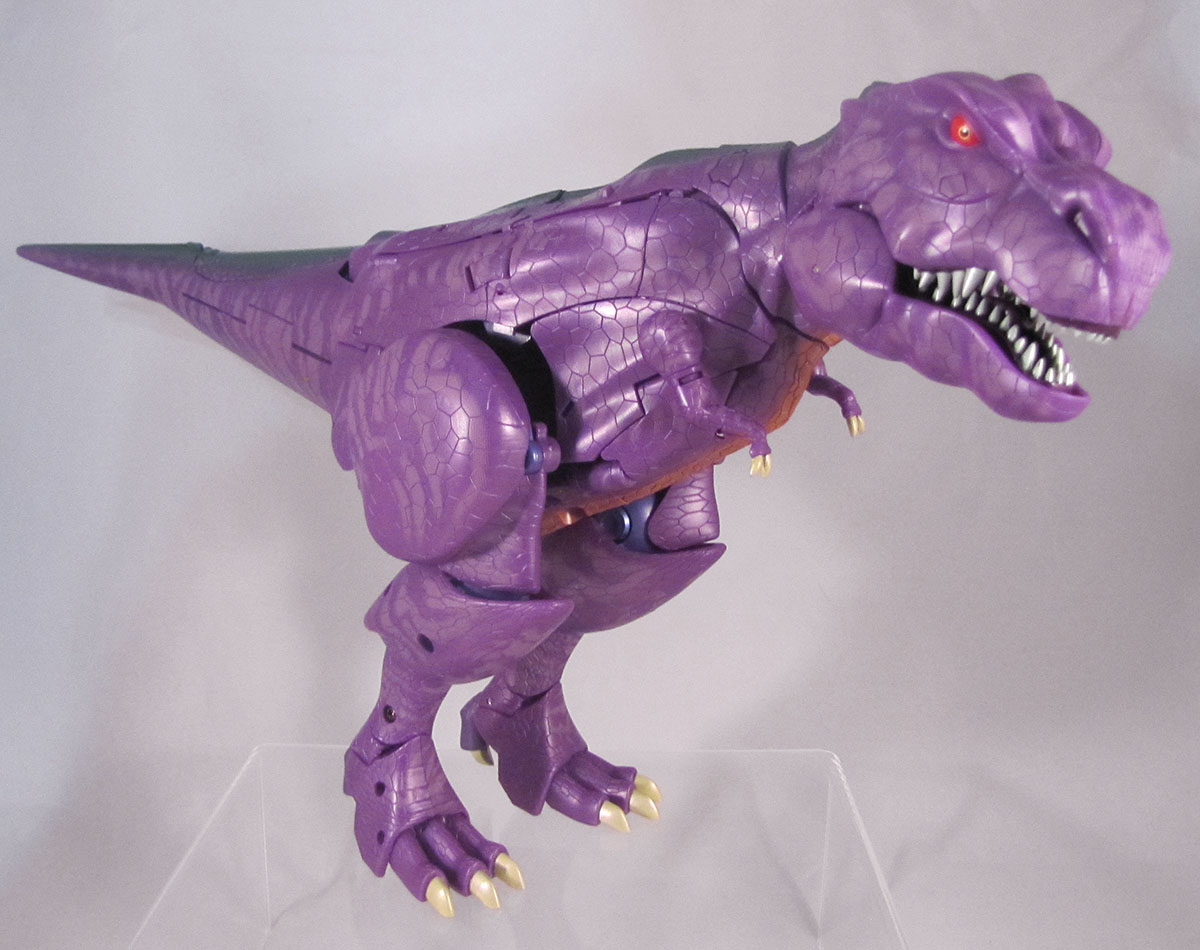 Like the other Beast Wars Masterpieces, Megatron is meticulously decoed.  He's got metallic paint and/or plastic to match the look of the mid-90s CGI.  He's got texture-mapped deco across his dinosaur skin surfaces.  The color matching is meticulous.  There's no places where the paint runs out because it goes around a corner and the budget's thin.  He's painted from every angle.

For the reasons listed above, he's also pretty expensive!  Amazon.jp has pretty good discounts on preorders, but without them, he was the most expensive Masterpiece toy thus far.  That is, until the third Masterpiece Optimus Prime comes out this fall.  (Prime's shorter, but he comes with, you know, a trailer.) 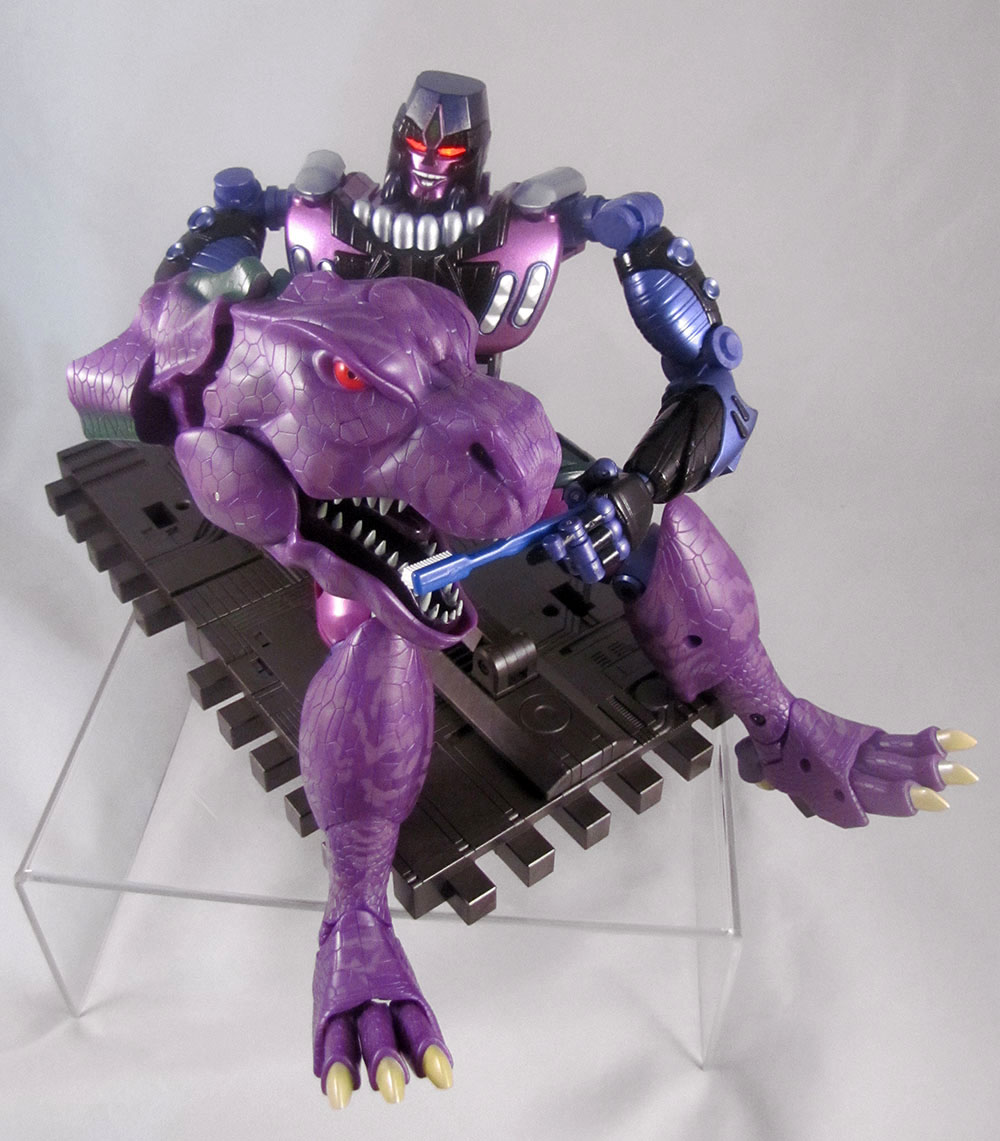 Megatron comes with a handful of accessories.  He's got two extra faces in addition to the neutral one.   There's the trademark grimace, which should remind us of the original toy's expression.  And most importantly, there's the Grin.  Some call it the Triangle Grin, some call it the Eric Cartman Grin, but it's the Grin.  I love that face.  It's the "Yeeessss!" face.  It's the "I love being an evil jackass" face.  And finally it's in plastic.

There's also a toothbrush.  Yeah, there's a toothbrush, so you can replicate that scene in "Before the Storm" where we catch him with all his extra parts off brushing his dinosaur hand's teeth.  ...the extra parts also all come off.  You can yank off the hip guns, the tail itself from the arm, the kibble piled on his back, and the shoulderpads.  This leaves you with a pretty skeletal Megatron robot that's only got the dinosaur hand, his dinosaur boots, and the dinosaur taint.  And it's all so you can more faithfully replicate that time he brushed his dinosaur hand's teeth. These Transformers folks at TakaraTomy are madmen.

Megatron comes with the shotgun he carries in "Call of the Wild."  He also comes with an adaptor for Dinobot's stand so you can mount Megatron on the stand's arm so that Optimus Primal can stand under Megatron's raised body -- also to replicate a scene from that same episode.  (There are also stand adaptor pieces for both robot and dinosaur modes.  There is no stand itself included -- you've gotta use Dinobot's or get a second Dinobot.)  There's also a weapon blast effect that you can plug into one of the shotgun barrels or into Megatron's open tyrannosaur mouth. 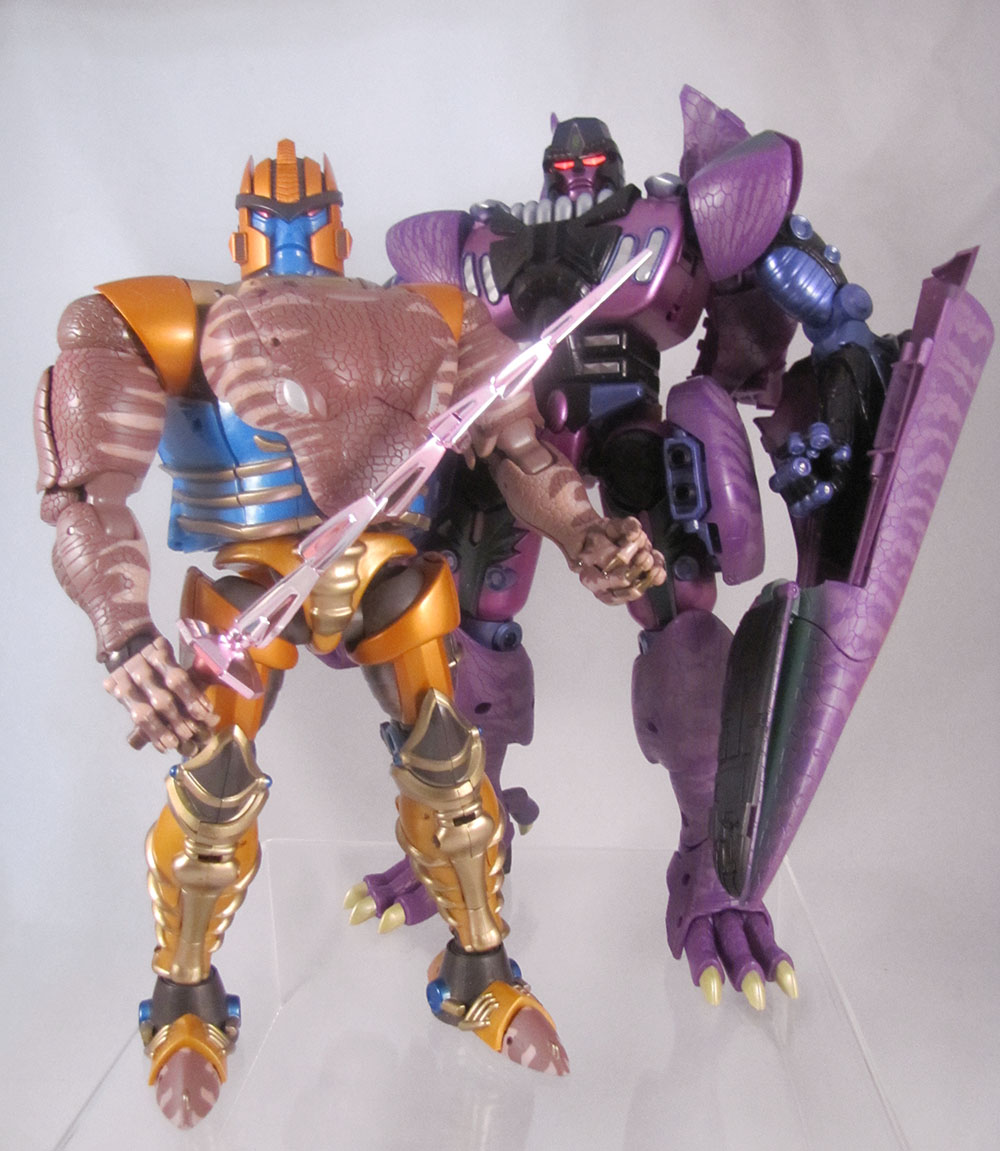 Transforming him the first time isn't fun!  The instructions actually come with a second, smaller sheet of... corrections, so that you transform him properly without breaking him.  Some of his hinges -- especially within the pile of tyrannosaur hide that bunches up on his back -- feel a little fragile.  The instructions want you to fold them in the proper order.  It's also difficult to pull the tyrannosaur hide parts apart the first time.  They're locked together pretty well, and you don't know yet where the connection pieces are and where the hinges are.  It's a pretty large web of interconnected thin plastic sheets.

The second problem area is transforming his torso.  Most of it pulls out along a slider, and that sucker is, like, paint-locked or something.  It requires excessive force to pull out the first time, and you're not really sure what you can leverage against without breaking something.  I recommend... pushing with your thumb against the inside of the top of the pelvis while yanking back?  I dunno.

It's all much easier the second time around.  You know where the tabs are, you know where the weak points are, and everything stops being so hard to yank out as it was the first time.  Which is good, because both modes are excellent (unlike Dinobot's) and so you're actually going to want to spend time with both of them. 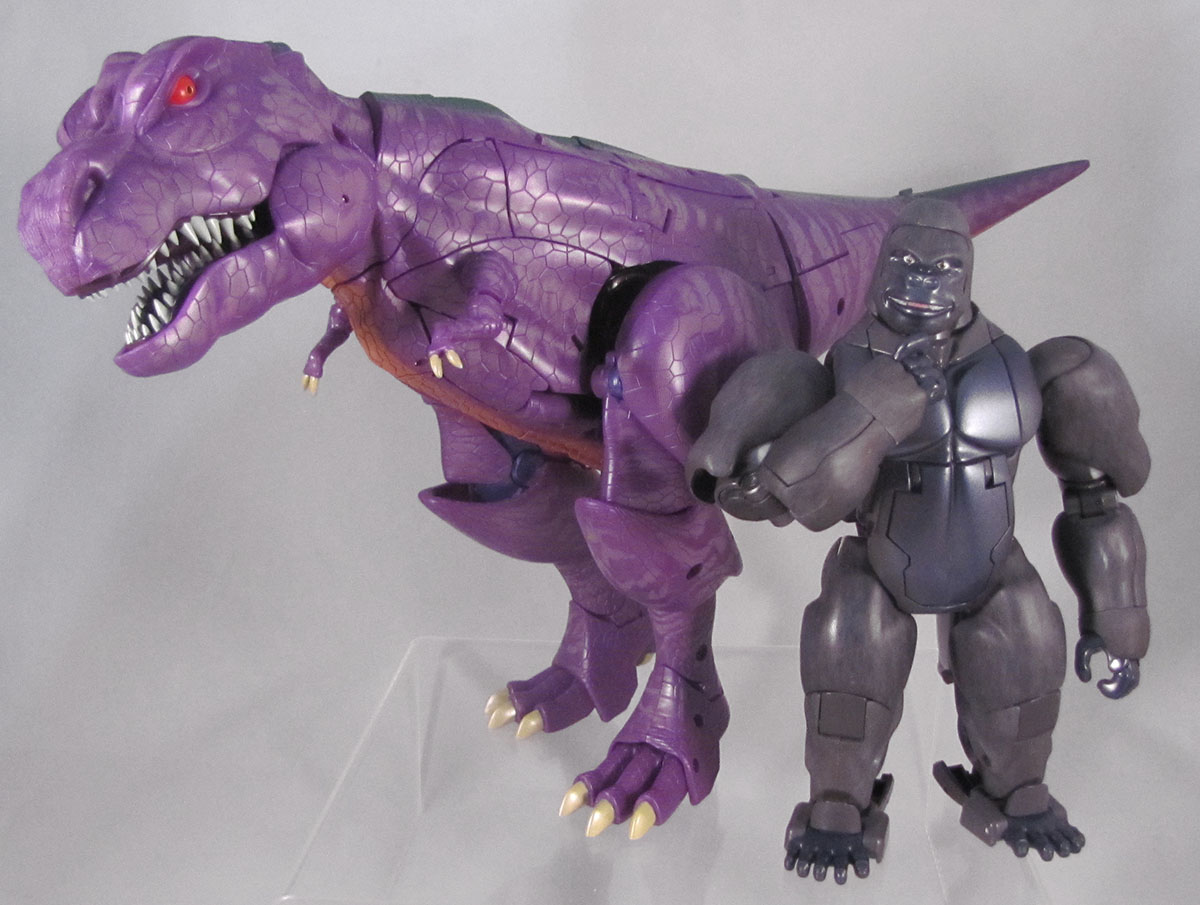 Some people have reported problems with the purple swirly plastic in the crotch.  A handful have reported cracking, and a few more have reported fear of cracking.  It's swirly plastic, and there are already some carved grooves in there, and so once you hear about splitting, every facet looks like breakage.  Mine, so far, doesn't seem to have any problems.  It's been suggested that the problem is not actually weak plastic, but that those few handful of cracked crotches were because of a rarely-occurring gear misassembly inside the crotch.  Meaning, hopefully, that it's not something inevitable that will happen to everybody's Megatron, but something that will happen immediately to maybe five people once they move a hip in any direction, and everybody else's will likely be fine.

Since mine seems to be okay, really the only downside to this fucking gorgeous toy is that my kids expect me to transform it constantly, and also transform it immediately.  Like, children, okay, but come back in half an hour, all right?  This is not a satisfactory answer to them.  They want dinosaur mode right now. 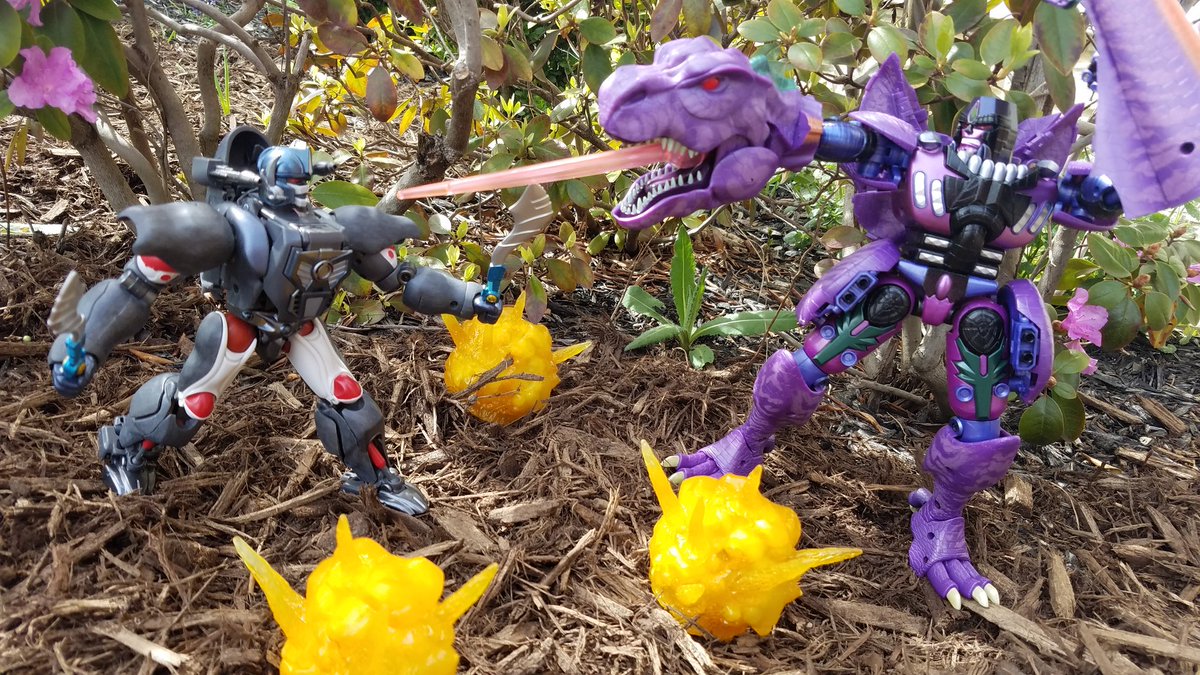