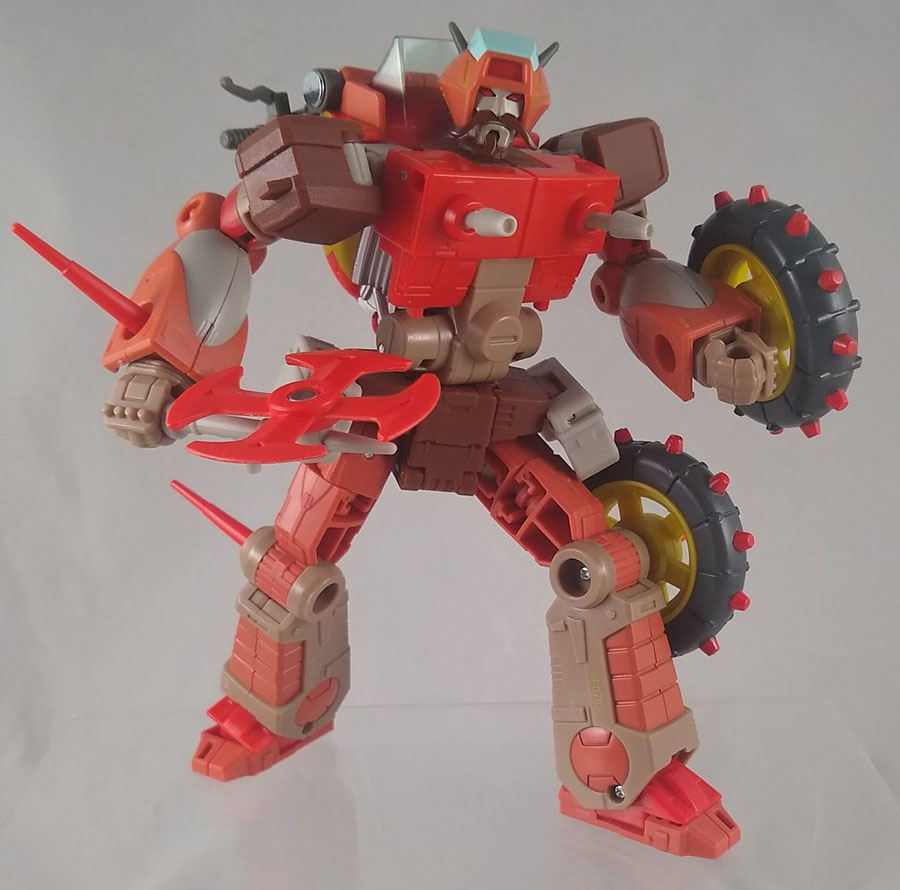 Wreck-Gar is part of the second chunk of Studio Series '86 guys, following Slag (have I talked about him yet?), and with Gnaw not far behind.  How many other Transformers are named after Hagar the Horrible?  (Get it?  Wreck... Gar?  instead of Hagar?  "Cuz he's a viking from a garbage planet?  Look, it's better than "Kup.")  Not many, I'm pretty sure!

As always, Wreck-Gar is super-relatable because he lives in filth and he speaks in memes.  And he's had a handful of toys over the years, but never one that actually tried to look like his appearance on the cartoon.  There was the original toy, which was based on Floro Dery's preliminary artwork, the Generations "Reveal the Shield" toy that tried to give him a more modern day spin and have him transform into a more realistic earth motorcycle, and the two Combiner Wars Wreck-Gars which were retooled from both Combiner Wars Grooves.  But a toy that attempts his finalized model sheet?  New territory!

The first thing that strikes you about '86 Wreck-Gar is his colors.  His toy was a bunch of tans and mustard, which is interesting in its own way, but the actual animation colors?  It's a mixture of colors you've never see combined on a Transformers toy before.  Everything's cranked a little into the red category, and it's beauty to behold.  It's sharp and bold and it's hard to take your eyes off of.  After a toyline trilogy of guys based on the primary-color-plus-black ethos of Diaclone color schemes, seeing hazard red and reddish beige and brown and... parma rosa?  Is that a color?   Whatever the color name of "mixing alfredo and marinara sauce together" is.  Maybe "clay" works.  Anyway, getting sidetracked by the inability to describe the colors Wreck-Gar has because they're that unusual. 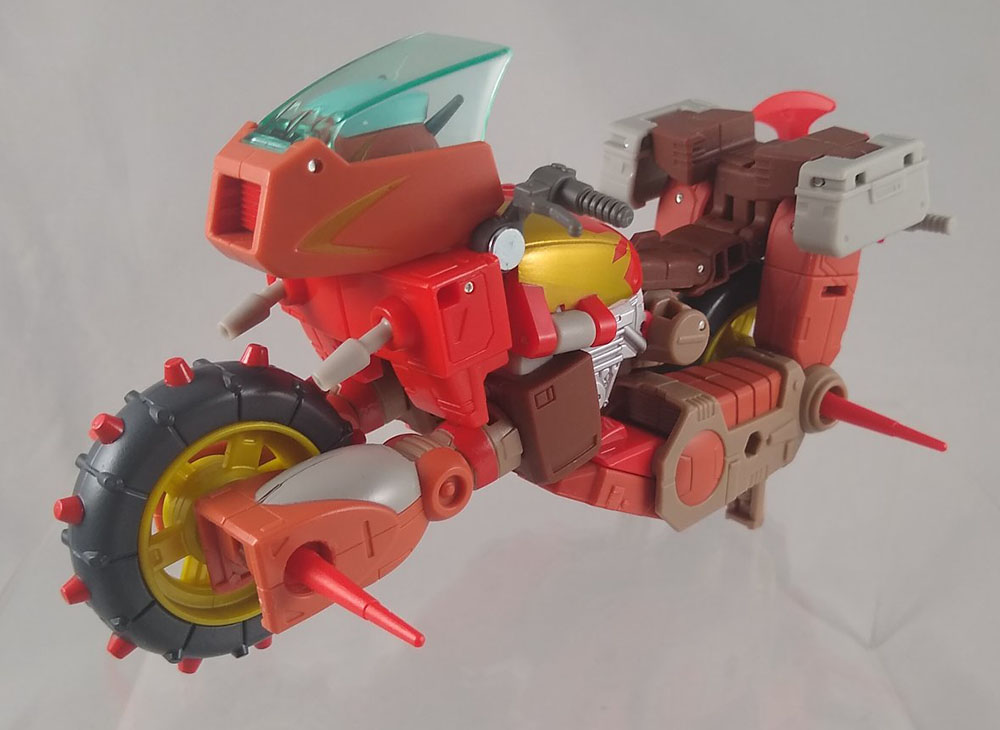 In robot mode, Wreck-Gar is an immaculate Wreck-Gar action figure.  He's got all the usual currently-expected articulation, including ankle tilts and waist rotation, plus wrist rotation and a bit of an ab crunch because of his transformation!  He looks like Wreck-Gar stepped off the screen.  Yes, his axe looked like a pinwheel in the movie, too, we're sorry.  The only thing they really had to compromise on was his beard, which is drawn to hang over the edge of his chest, but that doesn't really work on a head you need to be able to rotate.  So it's a lot stubbier.

His gun barrel nipples are balljointed.

He's also properly huge!  Wreck-Gar was drawn about Rodimus/Springer size, so him getting a Voyager Class figure means he's finally as tall as he needs to be, after a long period of Deluxe Class attempts.

The transformation is relatively simple, which is just as well since his motorcycle mode is clearly a robot bending over and straddling a pair of wheels like Cy-Kill.  The only complexity is the way his torso accordions out in three directions, and figuring out which exact configuration you need to unaccordion all the struts back together.  The wheels are partsforming, which you kind of have to do if you want an accurate Wreck-Gar.  The robot head, which originally transformed into the handlebars and headlights of the motorcycle (you just flipped a door to cover the face), now tucks inside the actual handlebars/headlights of the new vehicle mode.  You can see his painted fake windshield forehead just under the translucent actual windshield.  The robot head and vehicle mode analog are just two different shapes, so I can't think of a better solution. 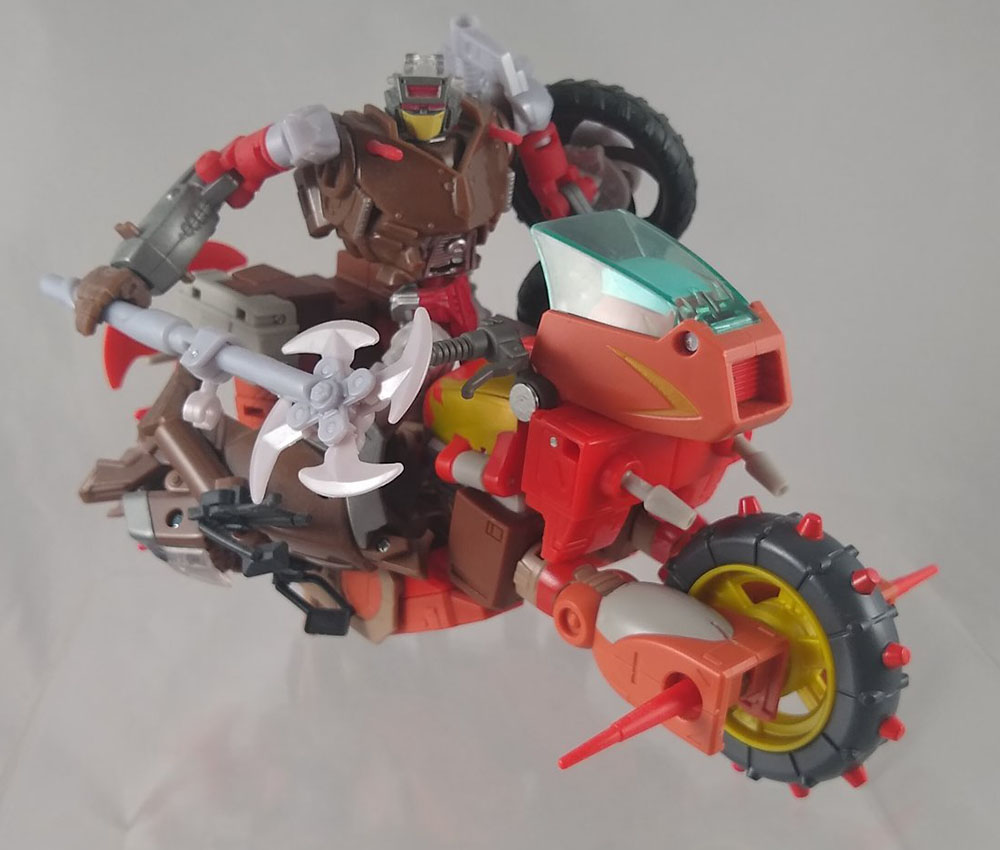 The axe plugs into the back of the motorcycle.  There's two kickstands underneath, tucked under the robot legs.

Another bonus of Wreck-Gar being Voyager Class means he's big enough for more of your toys to ride!  His handlebars are 5mm pegs, so as long as your rider has fists that can rotate to grip them, Wreck-Gar is rideable.  Undoubtably we will get at least one retool of this toy into other Junkions.  I think there's a store listing for Junkyard.

This is a very good toy of Wreck-Gar, who sounds like Eric Idle gargling salt water while repeating television jingles.  Get him if you see him.