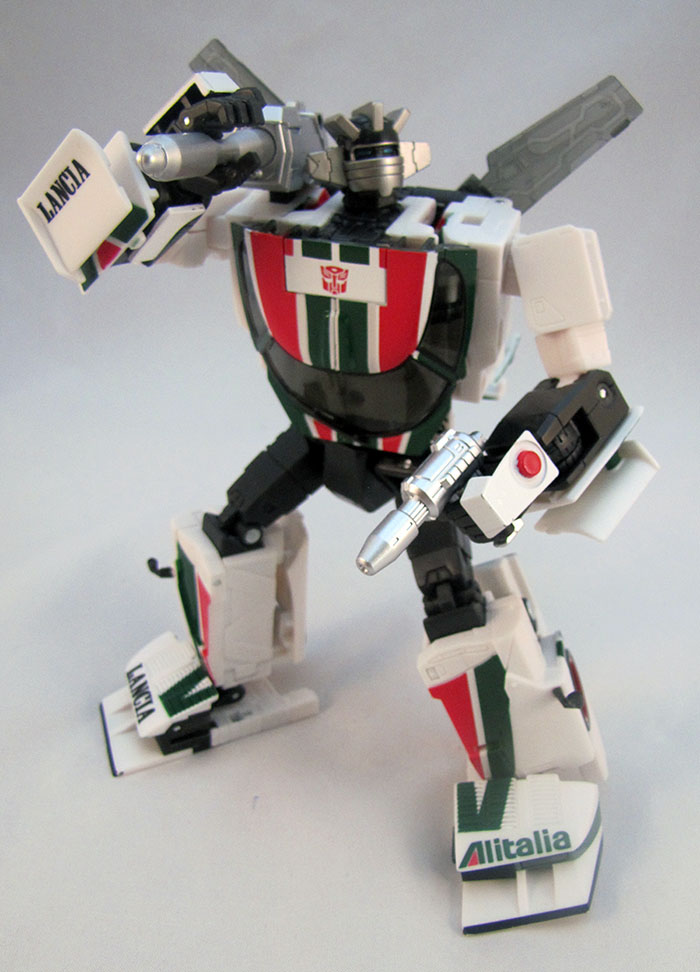 I haven't been buying all of the Masterpiece Transformers, just the guys that I really liked when I was a kid or think make interesting new toys.  And so I've skipped guys like the original Sideswipe, Red Alert, Smokescreen, and Bluestreak.  And it occurs to me, as I put Wheeljack on my shelf next to Prowl, that if things keep going as they are, I am going to have a buttload of white guys.  Other Autobots I'd buy are, like, Jazz and Ratchet.  Apparently I'm super into the Autobots who were white with some other trim color.  What a boring-looking shelf of favorite characters I'm going to have.  Hopefully Bumblebee will help break that up a little.

I've talked about being into Wheeljack before, with older reviews about other toys of him.  As a child, I focused on his appearance in the nineth Marvel US comic book issue, "DIS-Integrated Circuits," in which he and Jazz fight Frenzy and Starscream.  It was one of the first comic books I've ever read, and due to the realities of media availability at the time, I reread that comic book a billion million zillion times at any point of my choosing, while I could only watch the cartoon whenever it aired.  Prowl also pops up in that issue, but nearly as much, and Ratchet also features, but he like super-features in all the comics leading up to that issue, so that was more of a Ratchet chaser than a main course.  Even Buzzsaw's in that one.  What I'm saying is, that was basically my Transformers Ground Zero, as far as Characters I Like.

I didn't have toys of any of these guys at the time, and so I'd meticulously study the panels in which they transformed, trying to figure out how they worked.  This was mostly a fool's errand, since none of the art was particularly accurate to how the toys really worked -- and they couldn't be, since the robot mode character models were truly fiction -- but Wheeljack's sequence of panels where he transforms in that issue was meat enough for me.

That personal history is partly why I sought out Wheeljack's Masterpiece toy.  For the first time, that one thing can actually become the other thing, from Lancia Stratos to character model.  And the toy does a pretty good job of it, as much as any toy really could without involving size changing of certain parts.  The shins and feet still have to be the actual hood of the car, unable to shrink down into thin little legs.  The wheels and other car architecture can't just disappear as the animator wishes, and so it all has to go physically somewhere.  On the original toy, the entire back of the car behind the canopy merely folds out into his giant gorilla arms.  Here, some of the back becomes his normal-sized arms, but much of it buries itself behind his chest, inside his torso.  This is where the rear wheels hide.  The forward wheels don't hide, which is fine, I feel.  They remain on the outsides of his shins, though sandwiched between the hood and the doors of the car.  The roof of the car splits up asymmetrically so that his head can fit inside while in car mode, and then it latches back together once this is done.  The wings remain attached throughout the process, unlike how they were merely removeable accessories before.  There's hinges at their base so you can choose to point them back at a slight angle, if you wish.  He looks a little more dynamic that way. 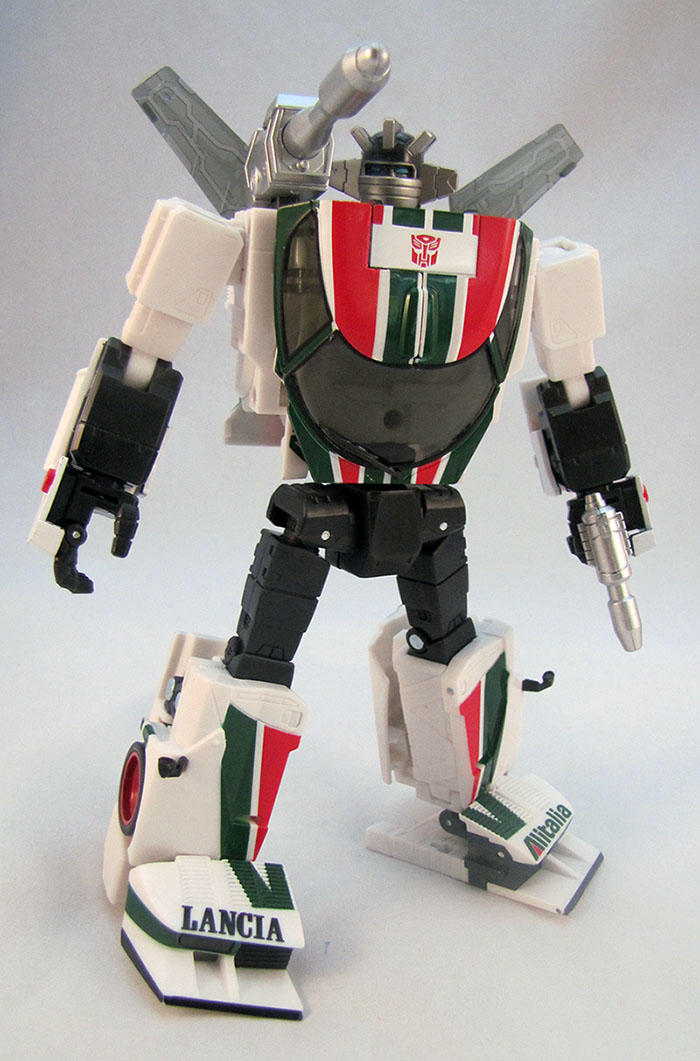 Though his wings were integrated into the transformation, his weaponry was not.  His shoulder cannon and its detachable missile has to be removed, and it can be repegged onto his roof once you're done putting him back in car mode.  The handgun pegs underneath as the exhaust pipe.

Complexity-wise, he's not as gloriously straight-forward as Prowl, but also not as frustratingly fragmentary as Sideswipe.  Over time, the reality of the original Wheeljack toy has contaminated my mind's eye version of Wheeljack, and so it's a little odd to see Wheeljack as this perfectly-proportioned humanoid guy, rather than the gorilla-shape of the 1984 toy.  He looks skinnier than I expect him to be, but the intended goal was to look like the skinnier, more-humanoid cartoon drawing, so I can't fault the toy for it.