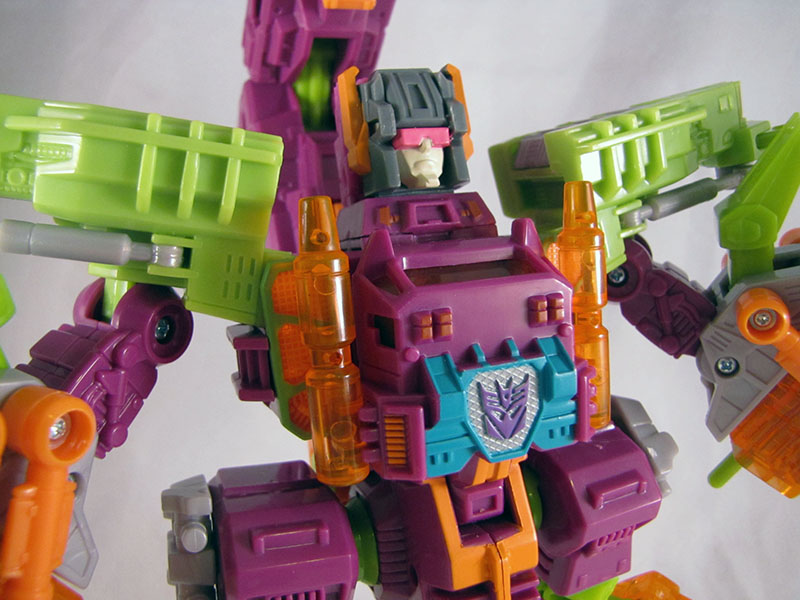 A G1-redeco of Energon Scorponok was not something I thought I wanted until this thing was presented to me.  The original Energon use of the mold was G1y enough for me already.  It had enough green for me to think of it as passably G1 Scorponok and I didn't figure the-same-thing-but-with-purple would be interestingly different enough for me to care. 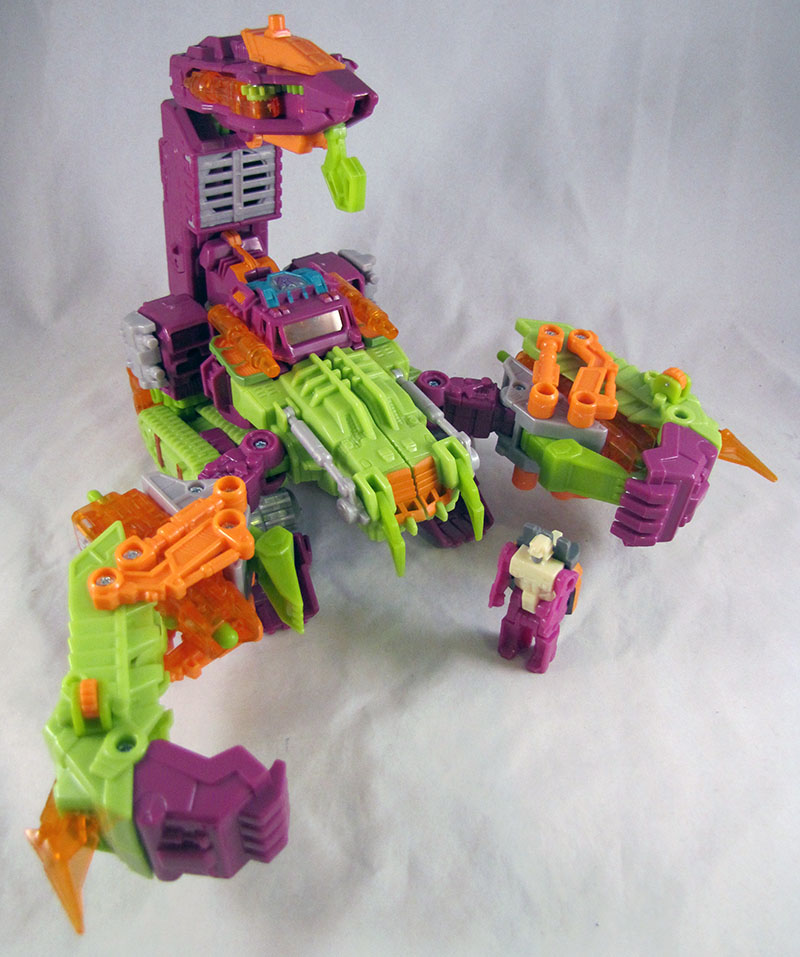 I guess I didn't count on the unforeseen insanity of giving the guy a new transforming Headmaster head in addition to the tweaked colors.  Honestly, that kind of stuff doesn't happen at this level.  We get a new head occasionally, sure, but the weird extra mile taken here took me aback.  Here's how it works: Encore Fortress Maximus came out recently, a reissue of the original Fortress Maximus.  That means tooling for the little Headmaster guy, Spike Witwicky, is viable.   So what Fun Publications did was retool Spike Witwicky a new Scorponok face to go on his back, then retool a new neck connector piece for the combined robot mode.  That piece just flips down into the chest cavity where the original head used to go in the other two modes.  So in the end you've got two separate toys being combined unnaturally into this new entity, using a multiple of new pieces.

Energon Scorponok is one of my favorite Transformers toys ever, and so even though I kind of shrug at the idea of doing a G1-style version, I'm happy to have another in general.  There's something delightfully monstrous about him.  Some folks don't like his proportions or the way his torso looks, but for me that's part of the appeal.  He's dwarfed by his own massive claws.  He looks like he could grab planets out of the air.  The whole damn thing projects this feeling of menace.  And, so, sure, I'll take another one of those with a new transforming head, why not. 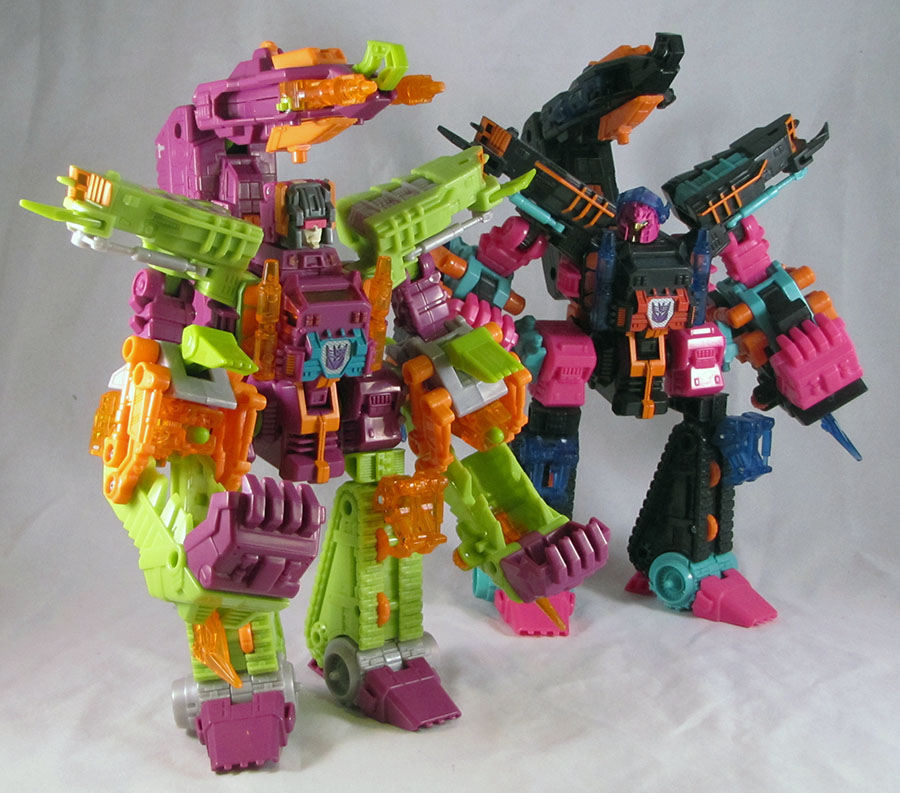 The retooling does solve a few minor problems with the toy, as well.  It ditches the original head's visor, which in latter releases was getting loose and having trouble staying on.  That's entirely gone, so problem dissolved.  Also the new neck connector piece makes the head sit up higher on the torso, so that looks a little better to me for the character, bridging the monstrous Energon Scorponok's feel with the slightly more housebroken G1 Scorponok.

The toy is, however, assembled wrong.  The green and orange panels on either side of the purple torso (along with the panels' purple backings) are swapped left-to-right.  This doesn't impede transformation, but it does keep his shoulders from sitting properly in robot mode by a fraction of an inch.  Just unscrew the two screws behind the panels on either side, remove the arms, swap the panels-and-backings, re-attach the arms, and rescrew.  Huzzah. 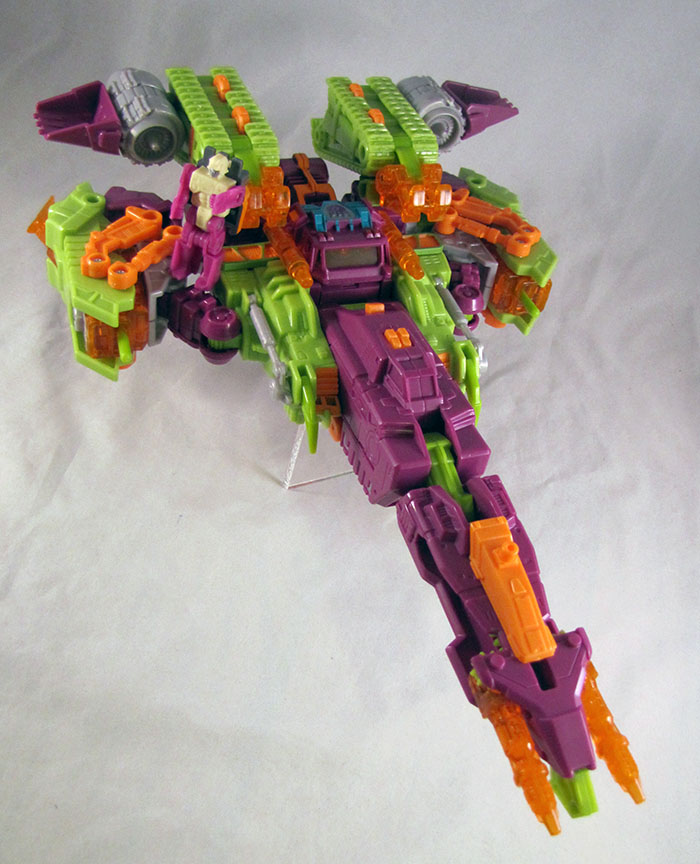 Scorponok still transforms into three modes -- robot, scorpion, and jet.  The new Headmaster can kind of stand in the small gap remaining inside the cockpit, in between the new neck piece and the wall of the torso, but it looks a little awkward.  The scorpion mode, as always, is great.  It's really just a pile of construction equipment - shovels and hooks and treads - assembled into the shape of a scorpion.  That's always really done it for me.  The jet mode is still that surprisingly awesome thing as well.  You wouldn't think you'd get a great jet out of a scorpion made of construction parts, but you do.  The electronics are gutted, however, as BotCon electronics tend to be.

The box set sold out, so the only place to get this guy now is on the secondary market.    Good luck with that.