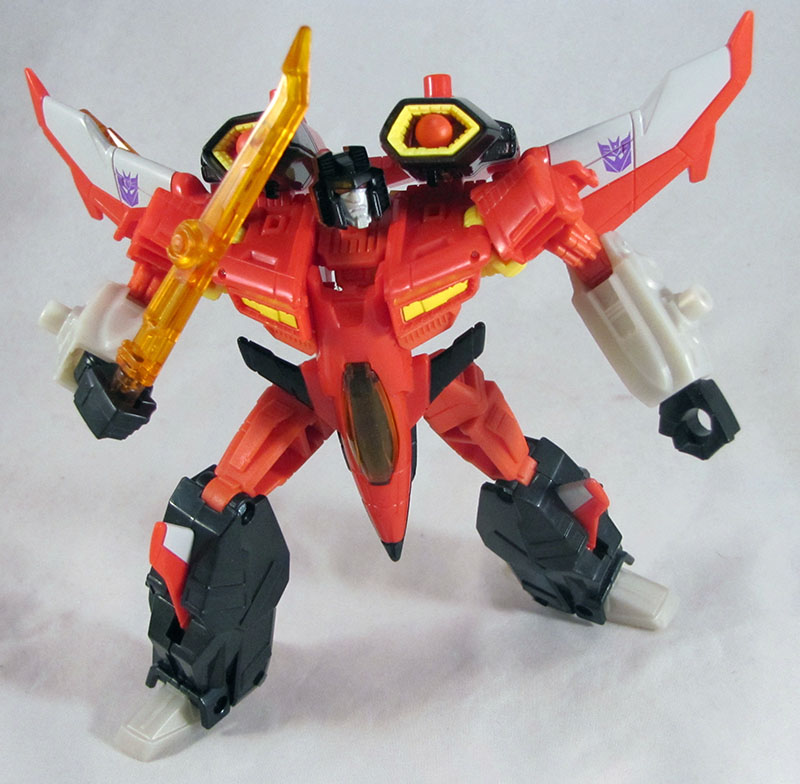 I was gonna talk about the new Whirl first, but he kind of snapped his leg off at the knee before I could even get stickers on him.  SO HERE'S ARMADA STARSCREAM, COVERED IN MY TEARS

Armada Starscream is, obviously, a new toy of the Starscream design from Transformers: Armada.  Since these toys are being featured in the IDW Transformers comics that come packaged with every Deluxe, Armada Starscream's design is also now a IDW comics continuity G1 Starscream toy!  For those of you keeping track, this is the second time in a row a Starscream toy that represented Starscream from a different continuity family has been used as a G1 Starscream in this comic.  With both Aligned and the Unicron Trilogy out of the way, once this Starscream also repurposes an Animated or Movie-style version of himself, I think this dude will have collected the whole set.  He will become Meta Starscream, the Allscream, Devourer of Alternate Starscreams.

The toy itself is fantastic.  While it is, broadly, a smaller version of the original Armada Starscream toy but with joints, the sum is more than these parts.  He feels solid and dynamic and feels like he has a presence, and he has more weapons than you expect of a toy in these expensive times.  While the original Armada Starscream would pop off his entire wing to make a sword, this new Armada Starscream hides his (now-translucent) swords behind his wings.  They just fold up and plug into the backs.  He also gets two, instead of just the one.  Also, dude's got double missile launchers.  It's been a while since those were the norm!  They're the push-pressure kind, not the spring-loaded kind, and they sit in his maneuverable shoulder intakes.  Starscream's also got Mini-Con hardpoints on both his forearms and on the back of each of his launchers, as is right and good.

If you're more discerning about your Starscream purchases, I'd check out this guy.  He's one of the best Starscream toys, I feel.   Or you can wait until we get that Jhiaxus retool out of him we seem to be receiving.  New cockpit, new wings, new tailfins, new head.  When I'm at Toy Fair in a few weeks, I hope we get to see him.