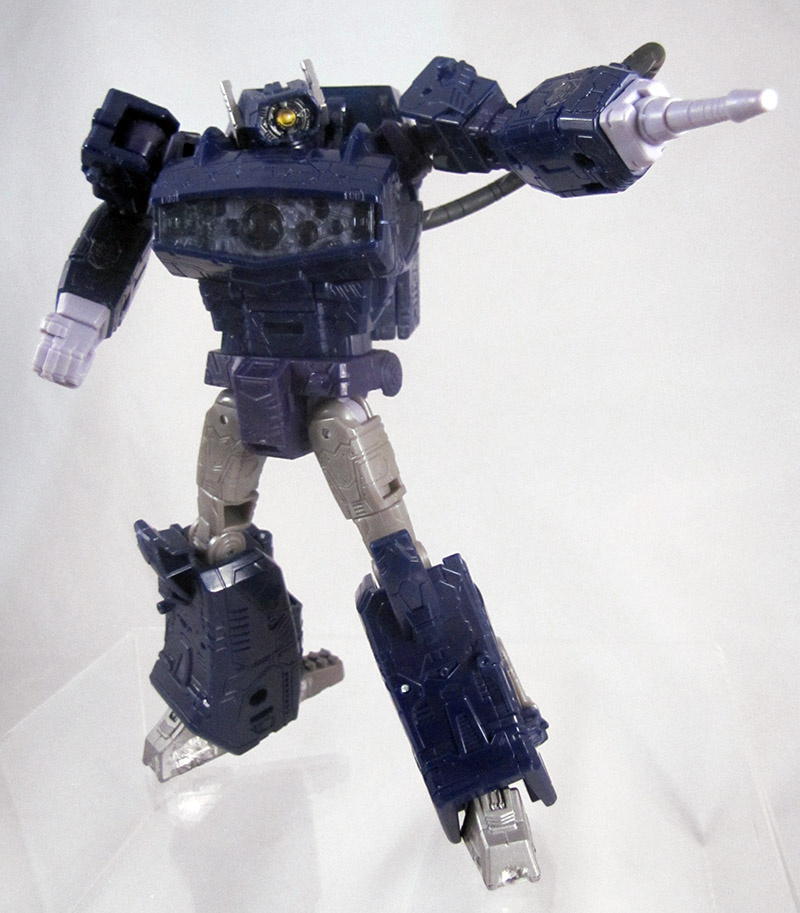 War for Cybertron: Siege "Stege" Shockwave is a toy that I'm disappointed in because of an expectation I had built up for myself.  Like, okay, Stege's thing is interchangeable armor parts that work with everybody else, right?  Cog comes apart and he fits on other guys.  And everyone has identical placement of 5mm ports all over their bodies.  Clearly Shockwave's Shockwave armor is going to be able to similarly fit on other Stege toys.

This is not the case.

And so I'm a little grumbly about it. 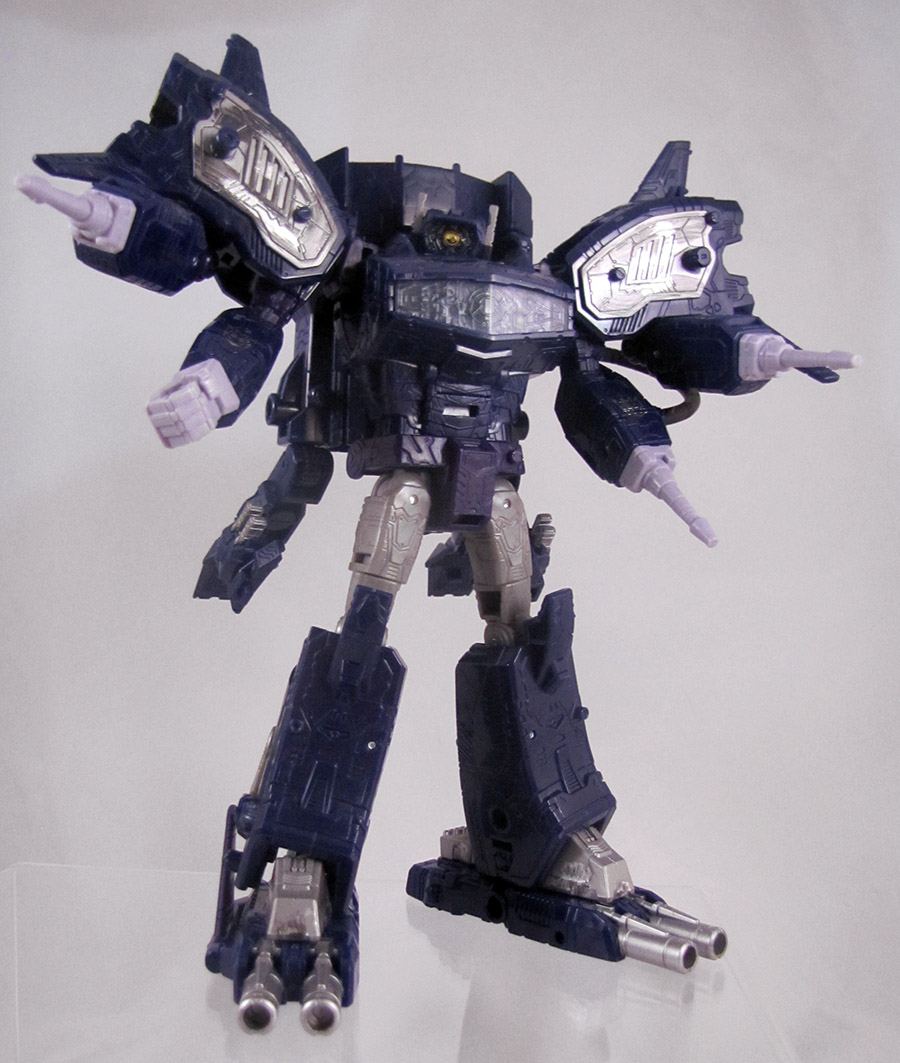 You can... sort of fit Shockwave's Shockwave armor on Skytread/Flywheels.  But I think this is just by accident.  Everyone else's shoulders are just off from being able to fit his shoulder armor on by, like, millimeters.  It's frustrating.  There's always some different kind of ridge that keep things from connecting properly.

I am denied giving everyone Shockwave armor by the smallest of technicalities.  I'm a little put out.

I mean, you can still give him Shockwave's platform gun shoes.  And you can peg his shoulder/arm thingers elsewhere, haphazardly, but it's not quite what I wanted. 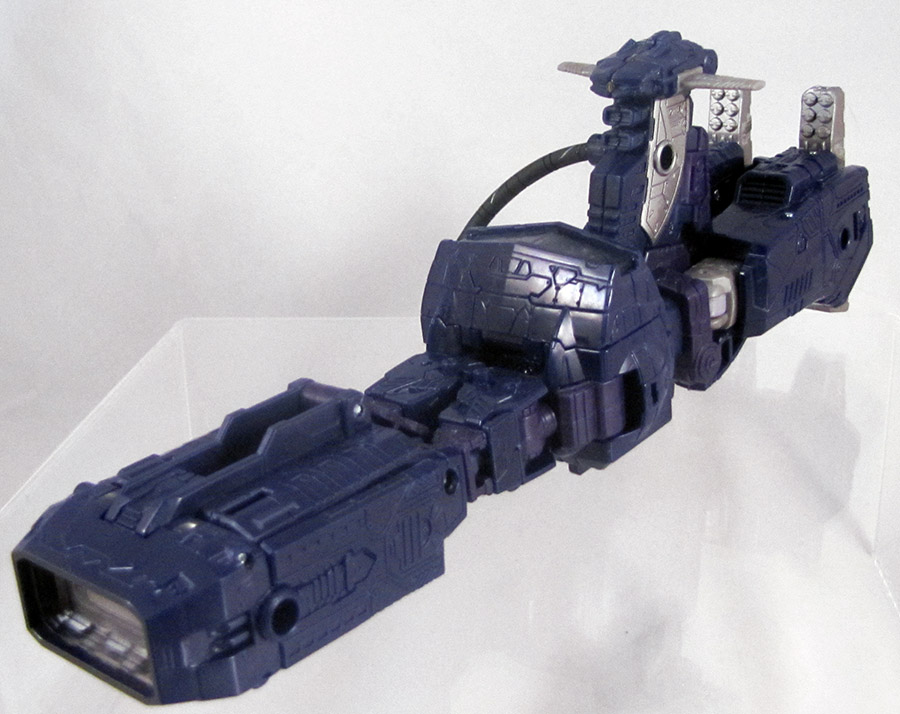 Other than that, Shockwave is very ... serviceable!  He's like a scaled-down Masterpiece Shockwave, transformation-wise.  The barrel folds up on his back, connected by long stretch of plastic.  His legs break up and become "the handle" and the butt of "the spacegun."  And I put those in quotes because he's one of those "no it's not a gun it's a, uh, submarine" things.  You flip his altmode upside-down, the "handle" is now a command tower, and it's "a spaceship."  Then you can connect all his extra parts to this spaceship mode to make a bigger more spaceshippy mode.  It's a pretty nice bigger spaceship!  The smaller spaceship is, uh, a spacegun upsidedown.

You can also connect all his extra bits together to make a little Shockwave Head-shaped hoverplatform for Shockwave to stand on. 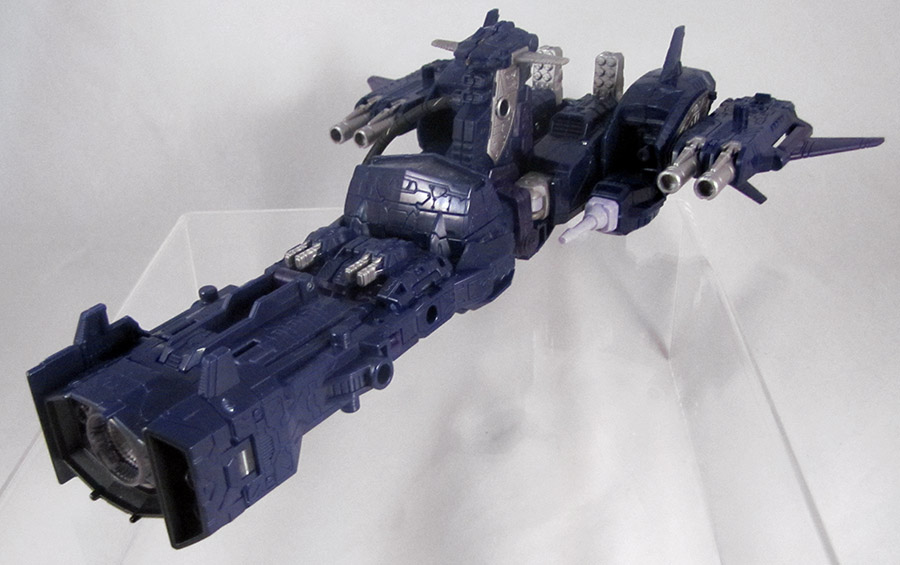 Also as per a lot of Stege, Shockwave is absolutely covered in detail.  Some would say... too much detail!  Shockwave's got a lot of stege on him, is all.  Just so much stege.  I've got astigmatism, which means I often have trouble with horizontal and vertical lines, so if I, like, don't focus too hard on Stege Shockwave I sometimes forget that he looks like he's covered in mecha-scabs.  Detail is fine but this detail is just so... homogeneous.  It's all the visual interest of a chicken tender.

I imagine he'd be pretty ugly if I had crystal clear vision.