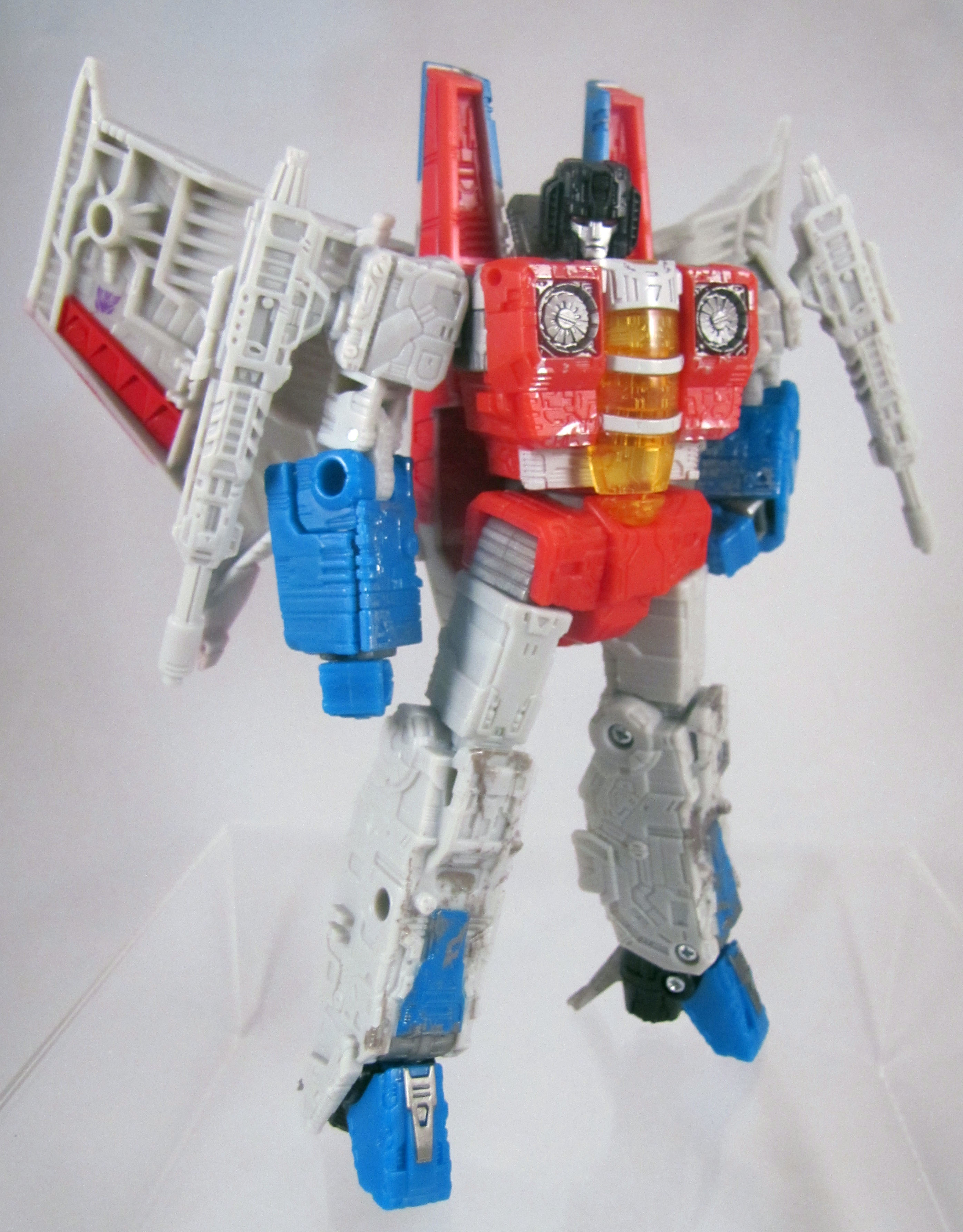 Transformers Stege is moving on to wave 2, and so here's Starscream.  He's half of the second wave of Voyager Class guys, and gaddangit, I like him.  I hate that I like him.

First of all, like, dude, he is very Stege.  His legs look like a close-up of the Death Star trench run.  Like he was carved out of a Cheddar Bay Biscuit.  Like he is literally a sponge.  I could go on.  It's not an aesthetic I like.  There's not an art to his leg details, it just looks like detail for detail's sake.  An obsession with lines without understanding how they fit into the whole.  It's like drawing in Photoshop while zoomed in too much.

The silver lining is that the soot and scorch marks they slop all over his legs has a flattening effect!  There's just so much detail on top of detail that your eyes kind of glaze over and can't focus on it!   *uneasy thumbs up*

It's maddening that this is the style they chose for this particular Starscream, because otherwise this particular Starscream is superb.  He is... delightfully poseable.  He's more poseable than the Masterpiece.  (though the Masterpiece is admittedly pretty stiff)  It's not just the amount of articulation points, but the range.  His elbows are double-jointed.  His wrists turn and can hinge down a bit.  His knees aren't double-jointed, but when you fold his legs up, the thighs collapse into the shins, allowing the legs to bend as much as a human's.  (there is a spring-activated piece of plastic back there so that his shins don't look hollow from behind)  And, universal across Stege toys Deluxe and larger, a dedication to giving each figure ankle tilts and waist rotation.  Yeah, that's right.  A Starscream toy has waist rotation.  You'd think that'd be impossible, based on, you know, how his chest canopy window usually has to reach across to his happy trail area, but this toy says LOL and splits that canopy in two so you can twist his torso as you please.  And also, he's got extra hinging at his shoulders for transformation that also allow you to get his arms across his torso into one of the best approximations of folded arms I've seen in a Transformers toy. 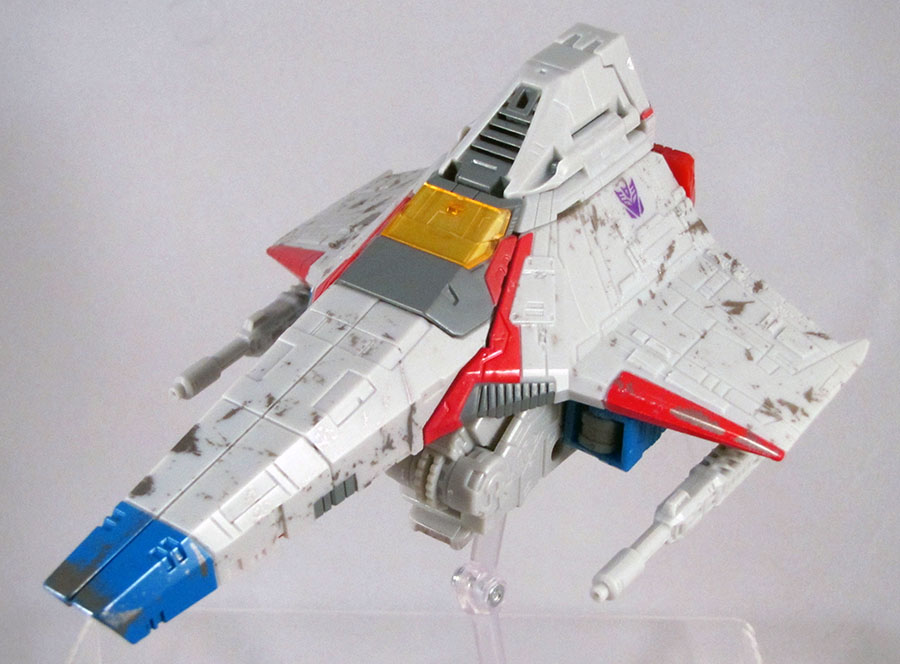 As a result of this, you can give him a lot of personality.  This is what will sell you on owning him once you have him in hand.

He transforms like a Transformers jet.  You know, he's got a robot on the bottom and a jet on the top.  In Starscream's case, you kind of put him in a limbo pose and then fold his backpack around him while twisting his shoulder intakes into the jet's nose.  And by "jet," I mean this guy is a Cybertronian Tetrajet, as seen in the first episode of the original Transformers cartoon.  And by "Cybertronian Tetrajet," I mean this guy is a Colonial Viper. 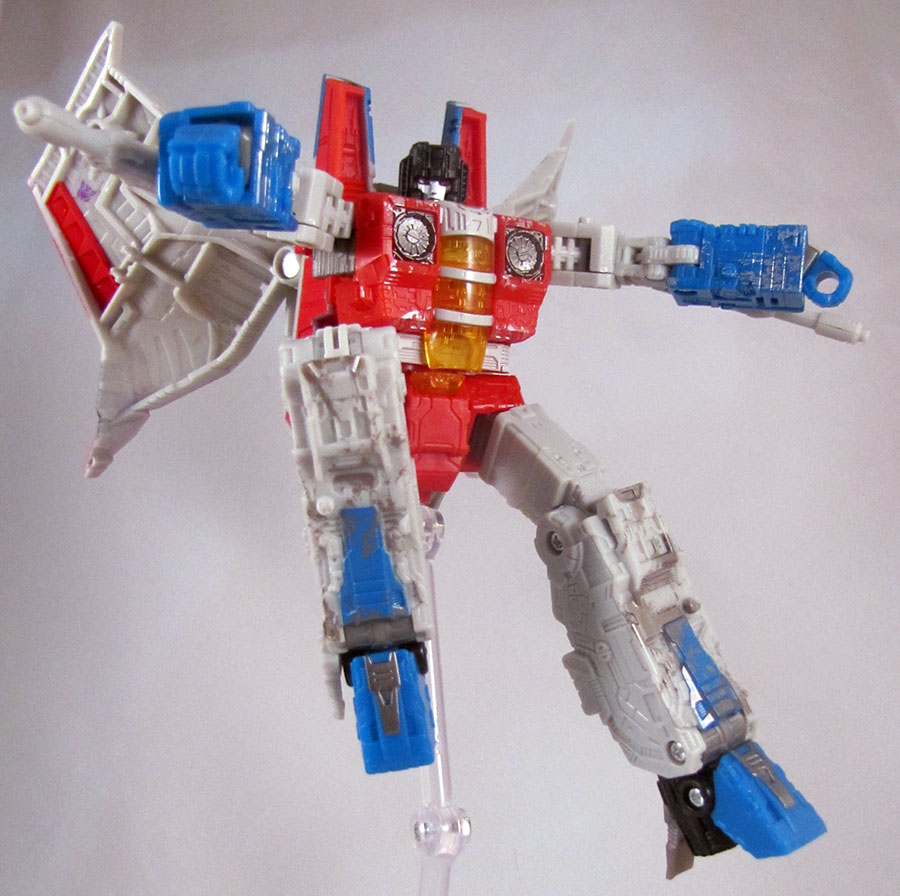 I'd love for this guy's face sculpt to have a smirk.  Instead, Thundercracker seems to have the smirk head, if the samples at Toy Fair last month were indicative of the final production run.  Smoove move, guys.  You got Seeker noggins switched.  (i guess they switched the original tech spec numbers around in the 80s, so maybe this is an homage)

To sum up, if you like Starscream and don't mind that his leg texture looks like an Escher print, get your hands on this guy.  He is a great toy in spite of himself.  I originally planned to buy him only because he's so Steged that he looks like the overdetailed art of Underbase-powered Starscream from the Marvel Comics.  But now I just genuinely like him.  It sucks.