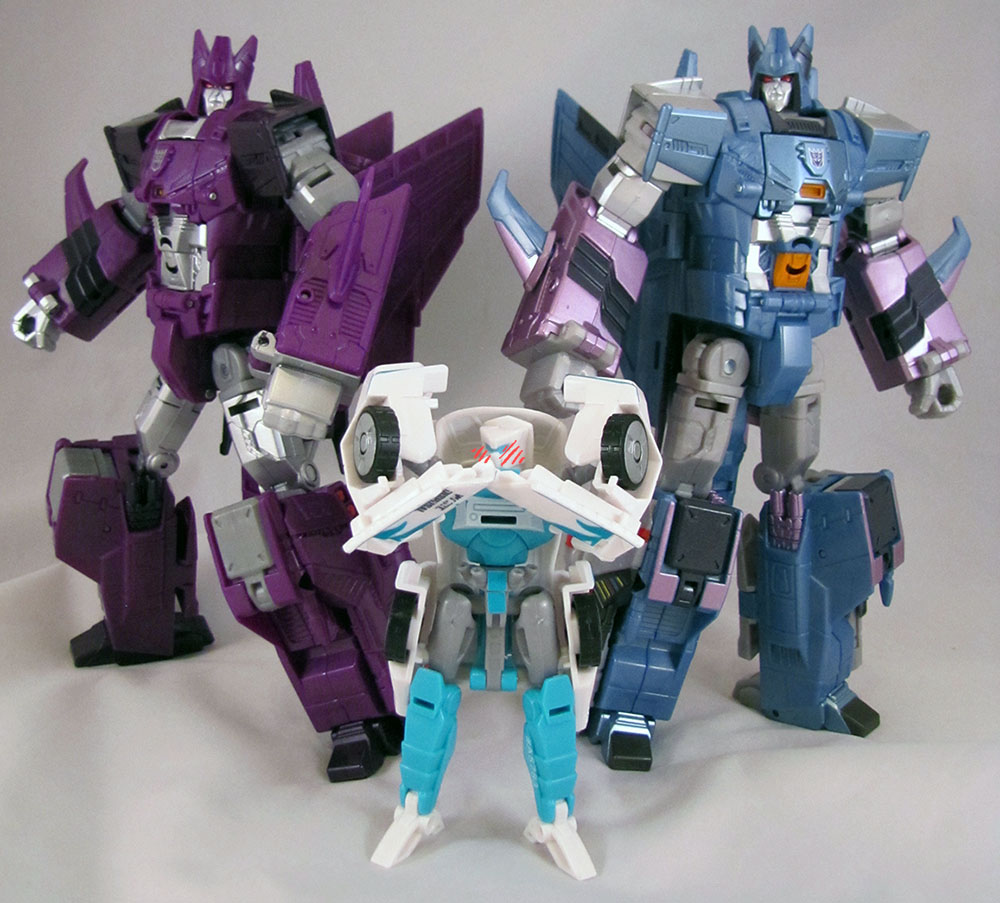 While I enjoyed the absurdity of Combiner Wars Cyclonus being a combiner torso for a giant Galvatron robot, there were a few things I disliked about the execution.  He was made by heavily resculpting Silverbolt, meaning the toy works from a foundation of a pretty stiff-looking robot.  Additionally, his reddish-purple -- nay, magenta -- color turned me off a little.  But he was rightfully huge enough to be Cyclonus, particularly for my More Than Meets The Eye shelf, and so I ignored these perceived flaws.

Unite Warriors Cyclonus fixes one of these problems!  TakaraTomy's extravagant redeco of that toy tosses out the magenta and returns to a more desaturated yet metallic lavender.  Indeed, TakaraTomy does their best to duplicate the colors Cyclonus has in the cartoon, and so their Cyclonus has a buttload of paint.  What's not paint is sparkly-fleck metallic plastic, and so he's kind of surprisingly pretty.  He's not exactly More Than Meets The Eye colors, but this is closer in many more ways than it departs. 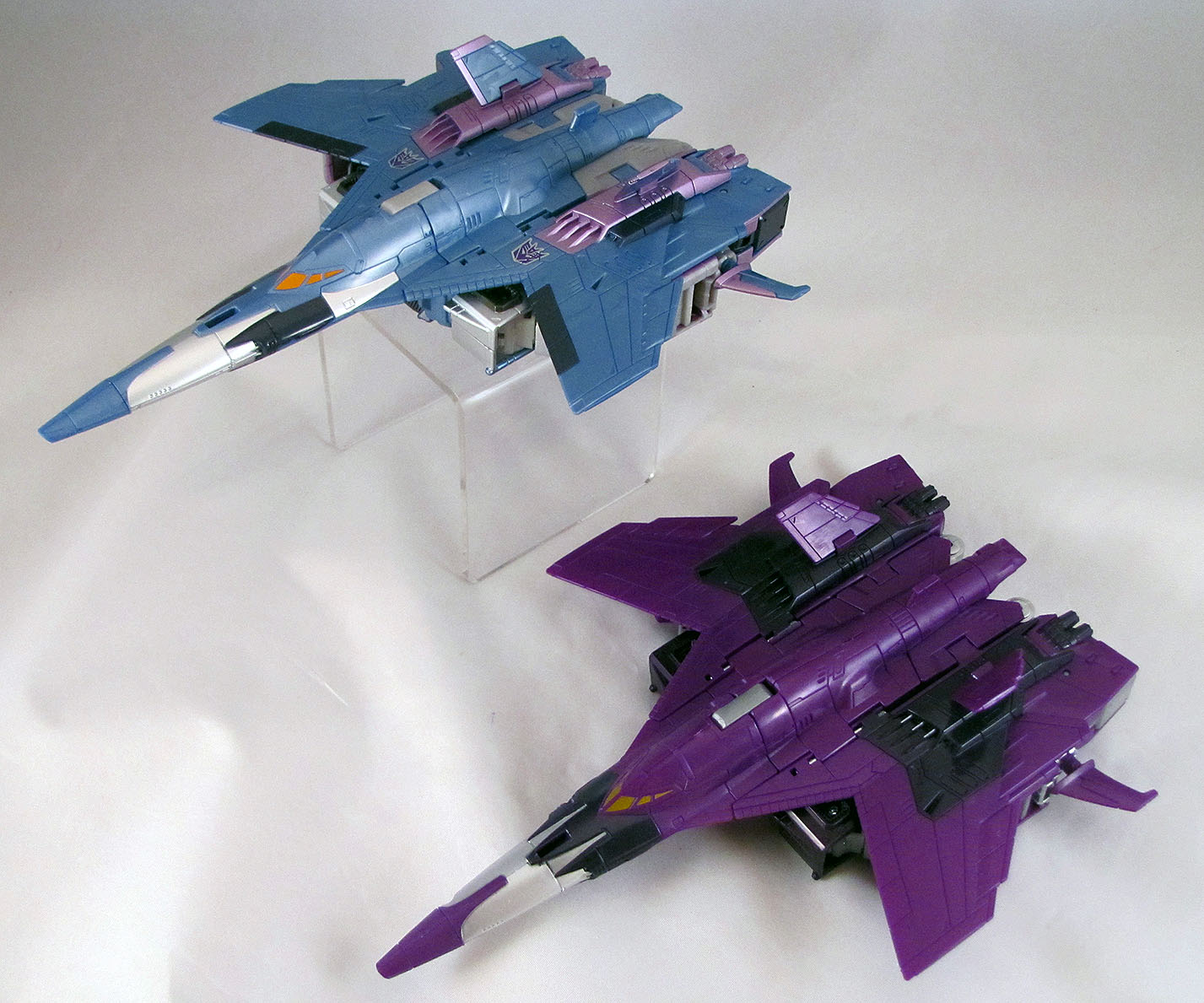 And what was already a great spaceship mode is moreso now, thanks to the hue shift and extra paint detail.  You wanna fly him around and make wooosh noises rather than use him to calibrate your CGA monitor.

The deco on the parts of Cyclonus that become the combiner Galvatron super robot guy is interesting to me as well, but I'll save talk of that for a later blogpost. 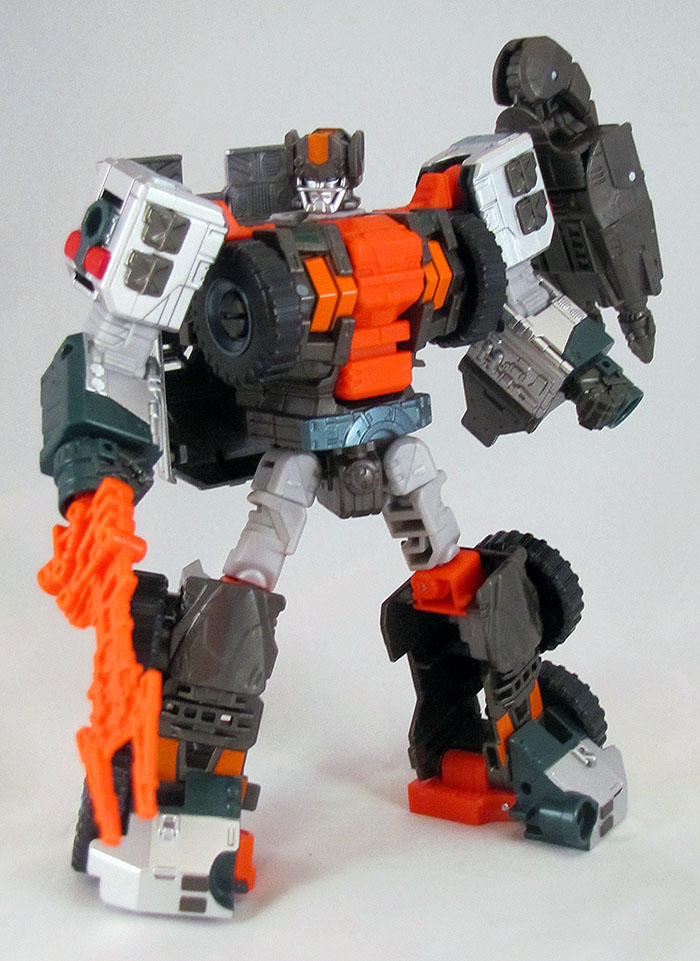 Short break from the Victorion folks because I have an embarrassment of Combiny Guy riches and I wanna skip around a bit.  So here's "Wandering Roller"!

TakaraTomy didn't release the new Protectobot, Rook, with their Defensor box set 'cuz they wanted to make a new Groove leg for their market.  Which is pretty sad for Japan, because Rook is one of the best Combiner Wars guys.  Well, that absence is fixed now, I guess!  TakaraTomy was like, okay, so there's all this extra tooling we haven't used yet because it wasn't G1 enough, so we gotta find a way to repurpose it all into a single combiner team guy we can sell.  Waste not, want not, and all that.  Using all the parts of the Combiner Wars buffalo.

So TakaraTomy grabbed our Cyclonus/Galvatron torso dude and decided, hey, this guy is nabbing dudes from across all the various Transformers timelines to be his limbs.  Which is a solid idea, A+, much approve.  And one of these guys is our Rook mold as IDW Publishing's Roller.  Now, Rook's sculpt actually doesn't really look much like IDW Roller, who is a distinct entity from that little nontransforming Roller guy that Optimus Prime keeps in his trailer, but Rook does transform into a six-wheeled armored vehicle like that nontransforming Roller guy, so I think that's where that connection was made.  In IDW, nontransforming trailer-pet Roller was named in honor of character Roller after the latter went missing.  (Hence the name, "Wandering Roller.") 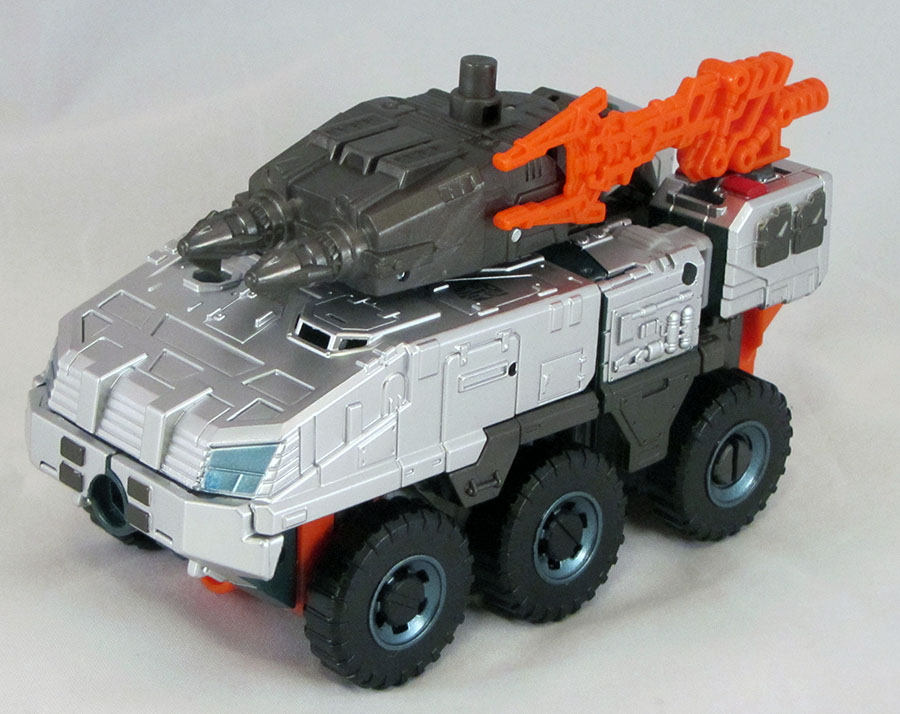 Out of all the other limbs in this set, I'm talking about Roller first because he's got such an interesting conglomeration of colors.  He's mostly silver in vehicle mode, which makes sense if he's supposed to be emulating the other Roller's vehicle mode, but in addition to that silver, in robot mode is added a rich dark brown, some striking Chef Boyardeeish orange, some metallic blue, and some dark forest green.  That mix of silver, brown, orange, blue, and green is not really a mix you see on many Transformers, if on any other Transformers, and it's a welcome diversion from the sea of white and red that most of Combiner Wars/Unite Warriors has been.  I heart it.

I'm not really sure where the green comes?  IDW Roller has all those colors except the green.  In fact, it should be more of the teal if it were being accurate to IDW Roller's design.  It's kind of odd.  I mean, I'm not saying not to use the green, since I like how it looks, I just wonder what its inspiration is.

Sadly, Wandering Roller does not come with any Kremzeek juiceboxes.