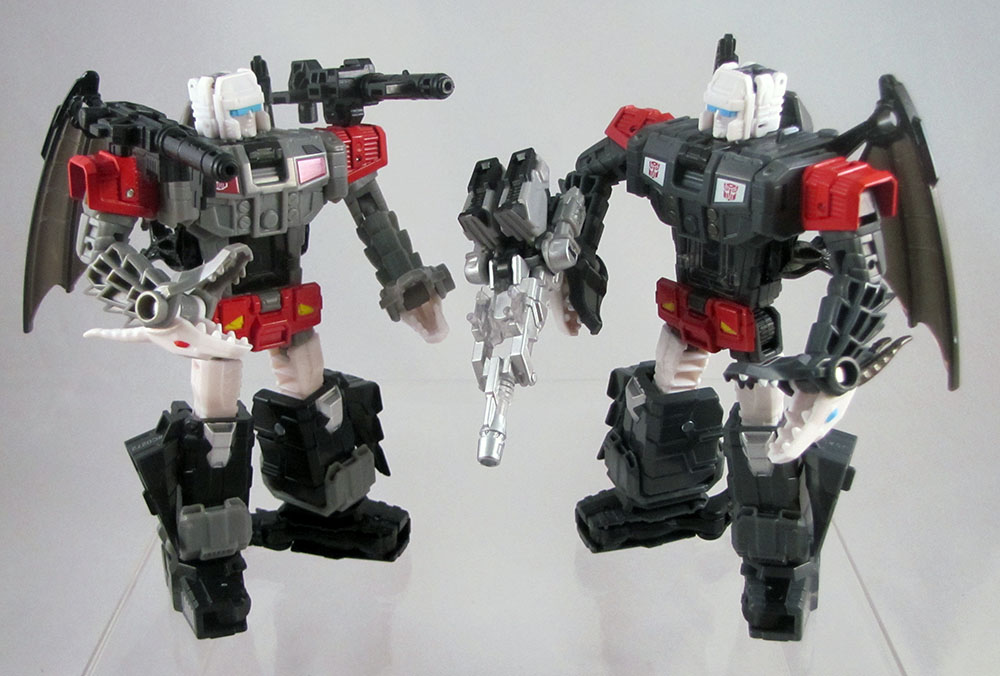 Fine, I have another Doublecross.  (Or another Twinferno, if you want to go with his new and frankly superior name For American Trademark Purposes)  I didn't really have a desire for a new Doublecross, since Hasbro's is fine, and Takara's colors are sort of different but not in an amazingly spectacular way.

But I needed his gun!  TakaraTomy decided belatedly to start giving their Targetmaster characters their Targetmaster guns, meaning Hot Rod and Kup got Firebolt and Recoil.  But Blurr was already out, and so instead of selling him again with a new Haywire, they gave that Haywire to Doublecross. 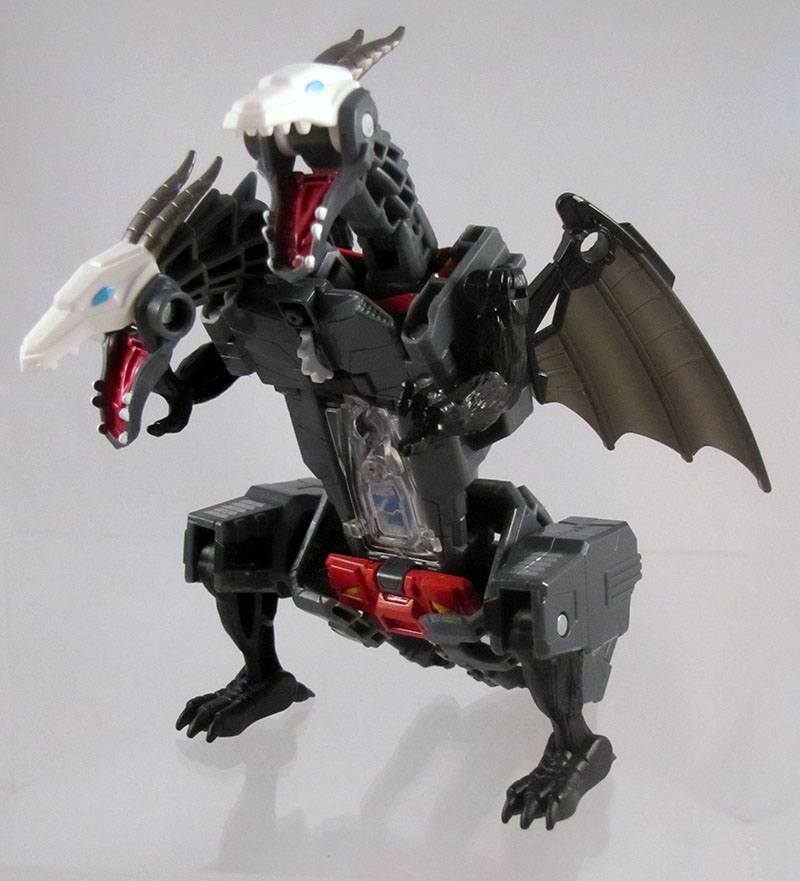 And so I have a second Doublecross.

There are some parts of the paintjob that I appreciate more than the Hasbro one.  The inside bottoms of the dragon mouths are painted red, as well as the lower set of teeth being painted white.  And I guess it's okay that they painted the toothed disk on his dragon chest so it stands out more, but that kind of just reminds you that he's sculpted to look like he has a gimmick the original toy does while not maintaining it.  Everything else feels like a lateral move.  Definitely not something I would have gotten without having a much higher love for Doublecross, which I don't, really.

But I dig me some Haywire.

Another deco improvement is the Titan Master that Doublecross's head turns into.  The toy is sculpted to look like White Leo, the leader of the Battle Beasts, and the Japanese deco puts some extra care into making White Leo look more like White Leo. This is nice.  I'm not at all into Battlebeasts, but I recognize this is nicer.

(meanwhile, the comic that comes with this toy decides that Haywire is actually the armored form of White Leo's little sister.  that's right, haywire in japan is a sexy catgirl)

Anyway, Haywire really needs to go to Blurr, because, like, Doublecross doesn't have hands. 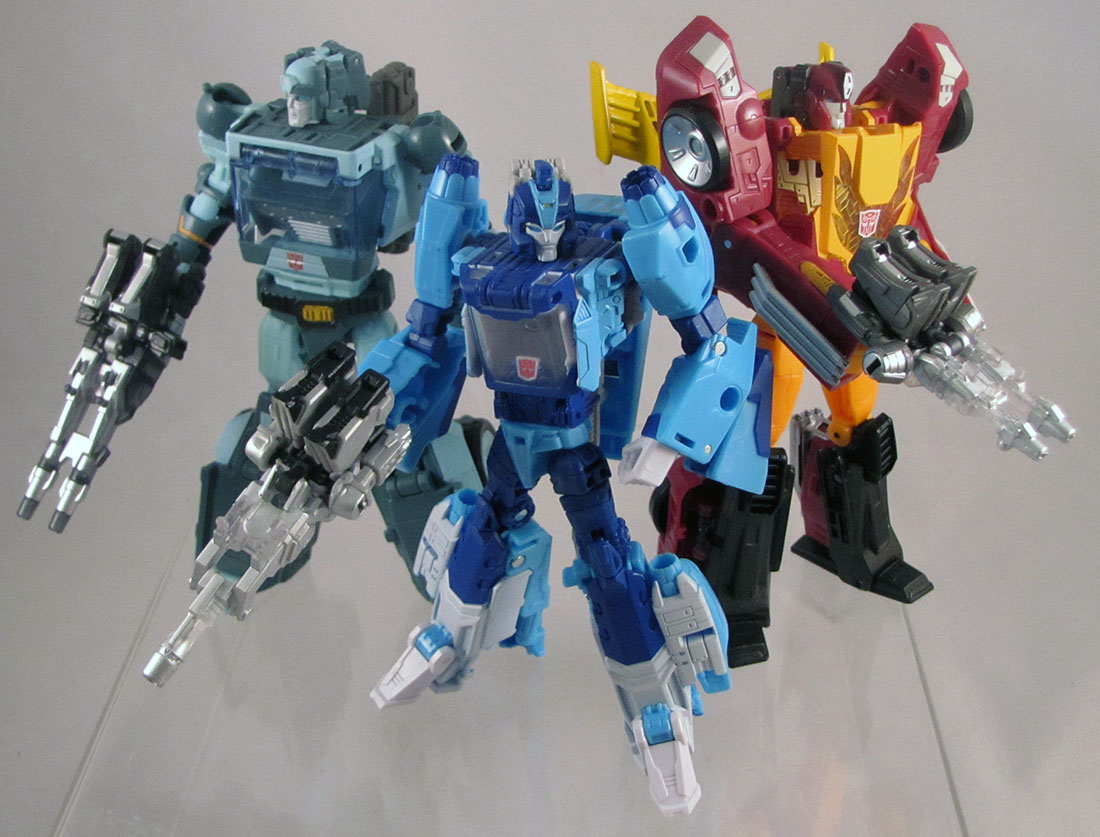 Tags: doublecross, twinferno, haywire, titans return
View/Post Comments
probably has his hands make out with each other all the time
Posted November 23, 2016 at 12:30 am 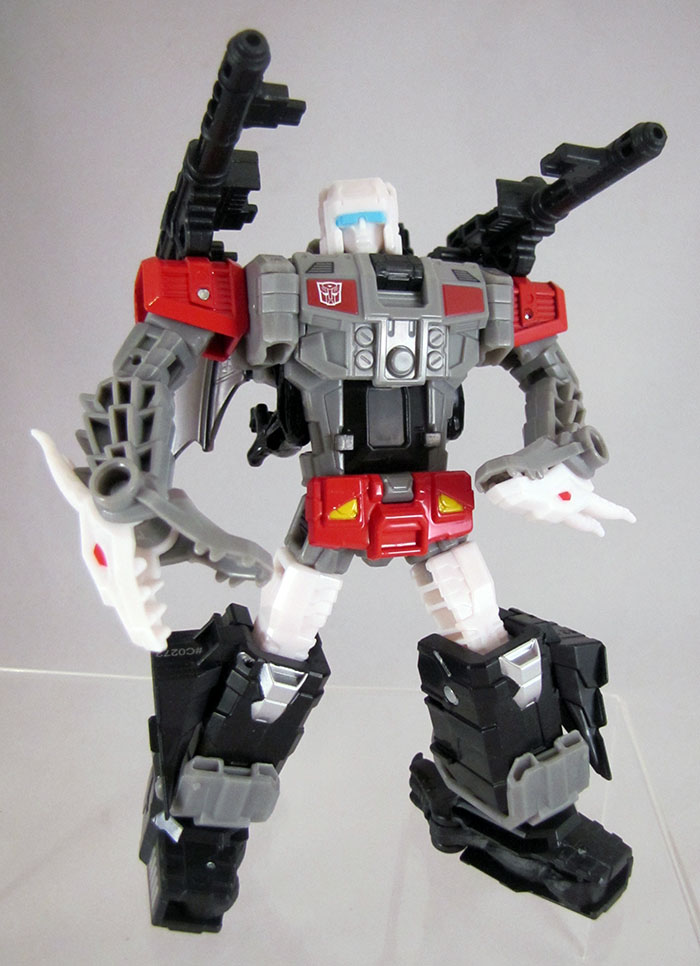 Combiner Wars was wonderful to me, but one thing it did fall short with is beasty dudes.  Of the guys from that line who actually combined, the Deluxe and Voyager Classes, only Sky Lynx (and his redeco, Deathsaurus), were beasty dudes!  There were buttloads of vehicles, sure, and, heck, even Sky Lynx himself is a vehicle and then a beast, but the entire line of Deluxe Class guys were just carcarcarcartruckcartruckjetjetjettanktank and so on.

And so I'm grateful that with Titans Return, I have been granted more Deluxe Class beasty dudes.  Say hello to Twinferno, who used to be "Doublecross," but thanks to the inability to get that old trademark, he has been gifted a new name that is about 30 times cooler.  The original Doublecross toy was the first Transformer ever to have organic detailing (his dragon mode had furry arms), and if you rolled him along the ground, there was a spiked gear in his chest that caused him to spurt out sparks from, uh, his sternum.  Unlike the other two sparky beasty guys he originally shipped with, his beast mode heads' necks were too long for the sparks to launch through the mouths proper, and so out the collarbone or whatever they went instead. 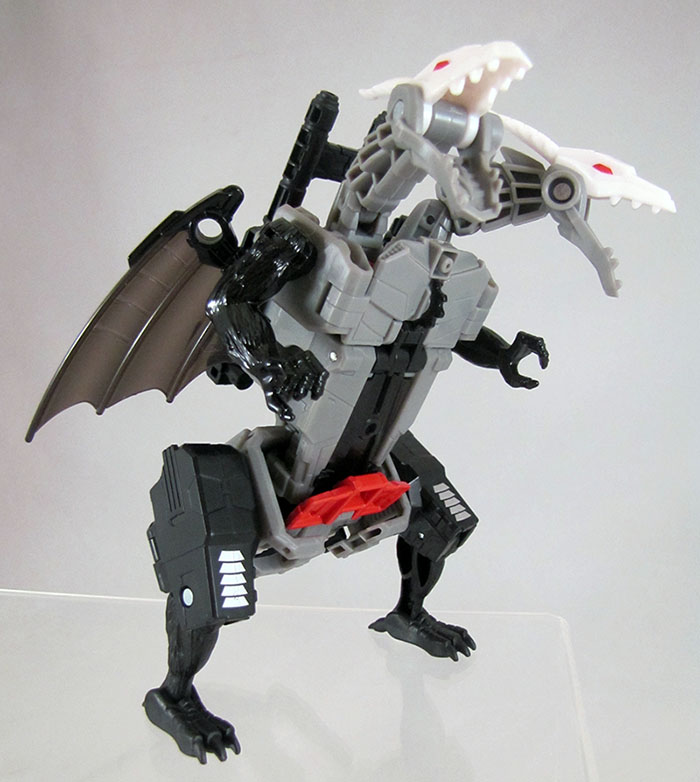 Hilariously, Titans Return Twinferno has the spiked gear sculpted into his chest, but it doesn't do anything.  It's just there to remind you of the thing the older toy could do but this one can't.  That's some Masters of the Universe Classics-level bullshit, there.

Twinferno's a great robot.  He looks pleasingly proportioned with his new big stompy feet.  I do love the stompy feet.  I especially love how they transform out of the beast mode's hind legs.  The hind legs just wad up, swing under the robot legs, and become feet.  This allows the tail halves to have that room on the side of the robot legs to themselves.  It's an amazing improvement and I love it.

(Note: I generally try to keep my photos of old toys next to new toys in a left-to-right chronology, but my vintage Doublecross has one of his wings broken off and so I put him on the right hand side in the below photographs instead of the left so you could see his single remaining wing better in beast mode.) 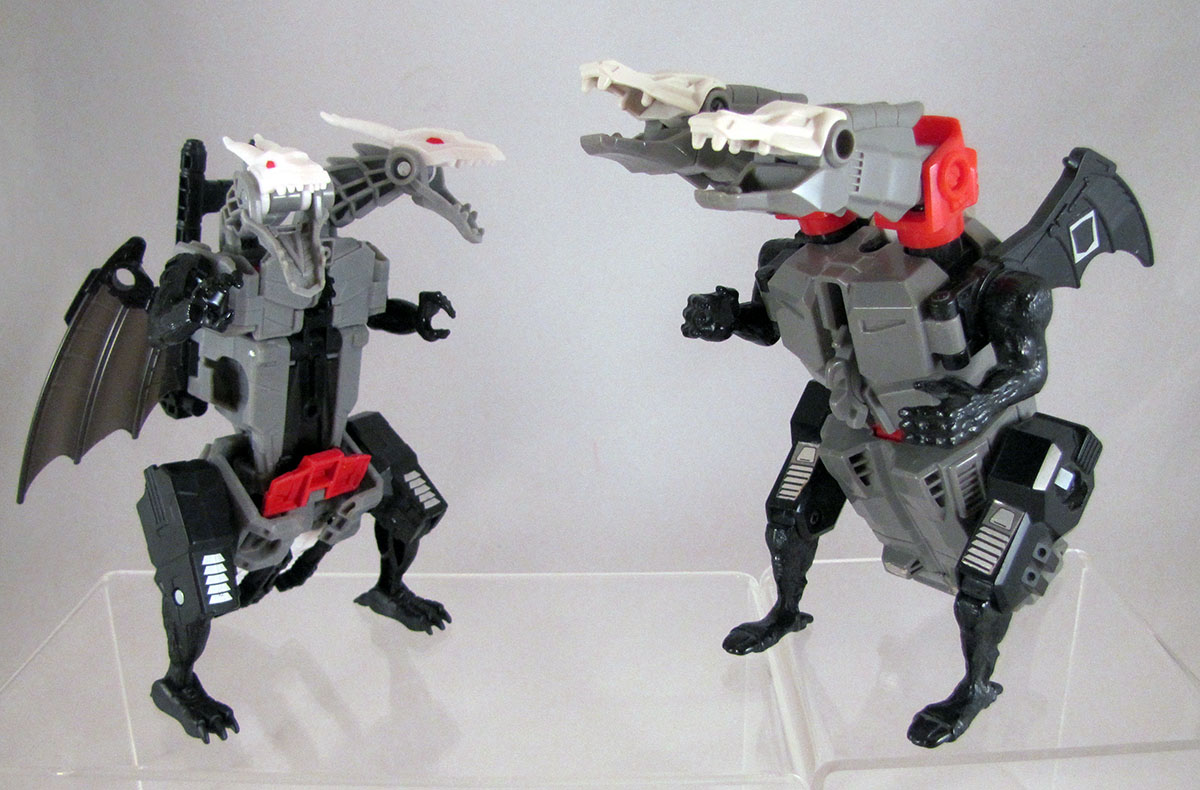 I love less the beasty mode.  Because the little head robot dude has to ride inside the beast mode, the beast mode has to fit him into the torso somehow, and now we end up with this.... super long torso.  It looks very awkward to me.  This beast is like 80% torso, with these legs all the way at the bottom and these tiny arms all the way at the top, and the torso is so long and ungainly that it makes even the dragon necks and heads look unimpressive in comparison.  I am a disappoint. 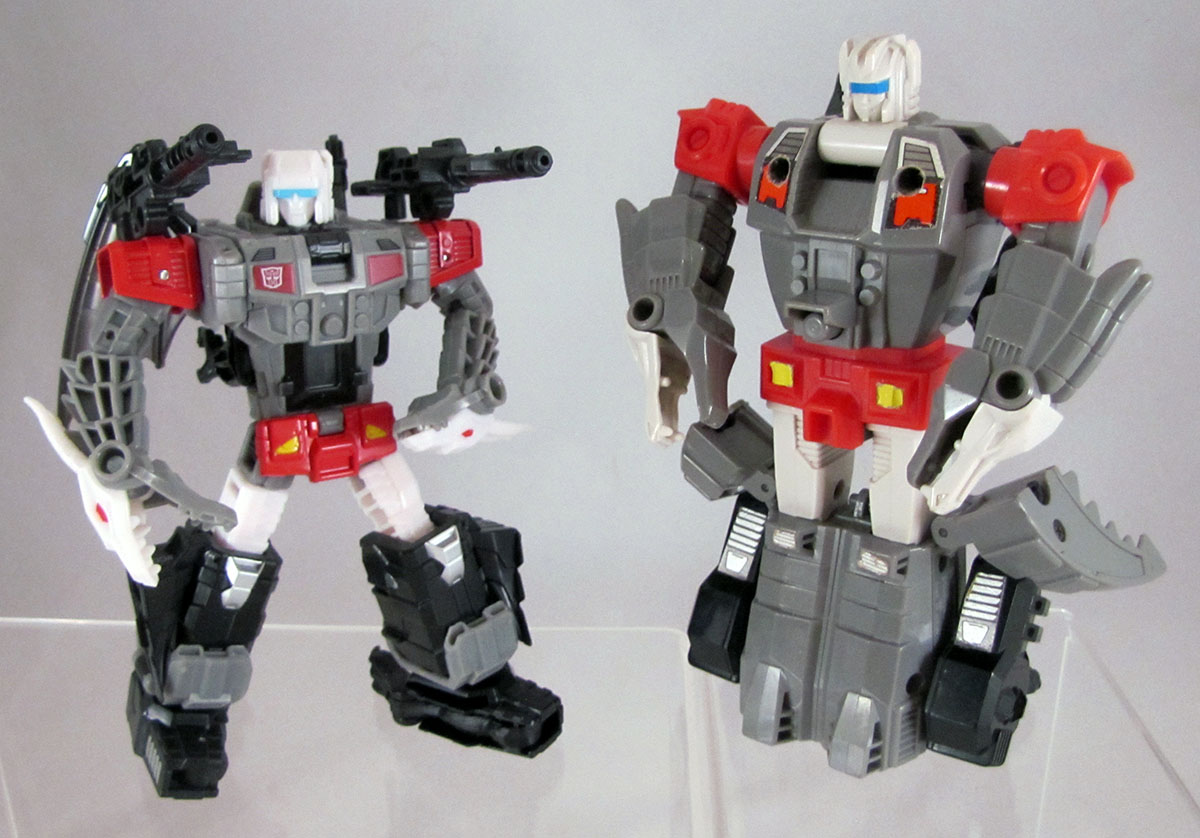 Twinferno's head guy, Daburu, is sculpted to look like White Leo from Battle Beasts.  In Japan, Battle Beasts were part of Transformers continuity, and they even had an episode about them in the Headmasters anime.  Doublecross was in that episode, so I'm told, and so that's why his head is a little white and black lion dude wearing an eyepatch.

I'm not sure I'm the specific audience for that reference, but I'm sure someone will enjoy it, and it certainly bothers me none.

I really do love that new "Twinferno" name, though.