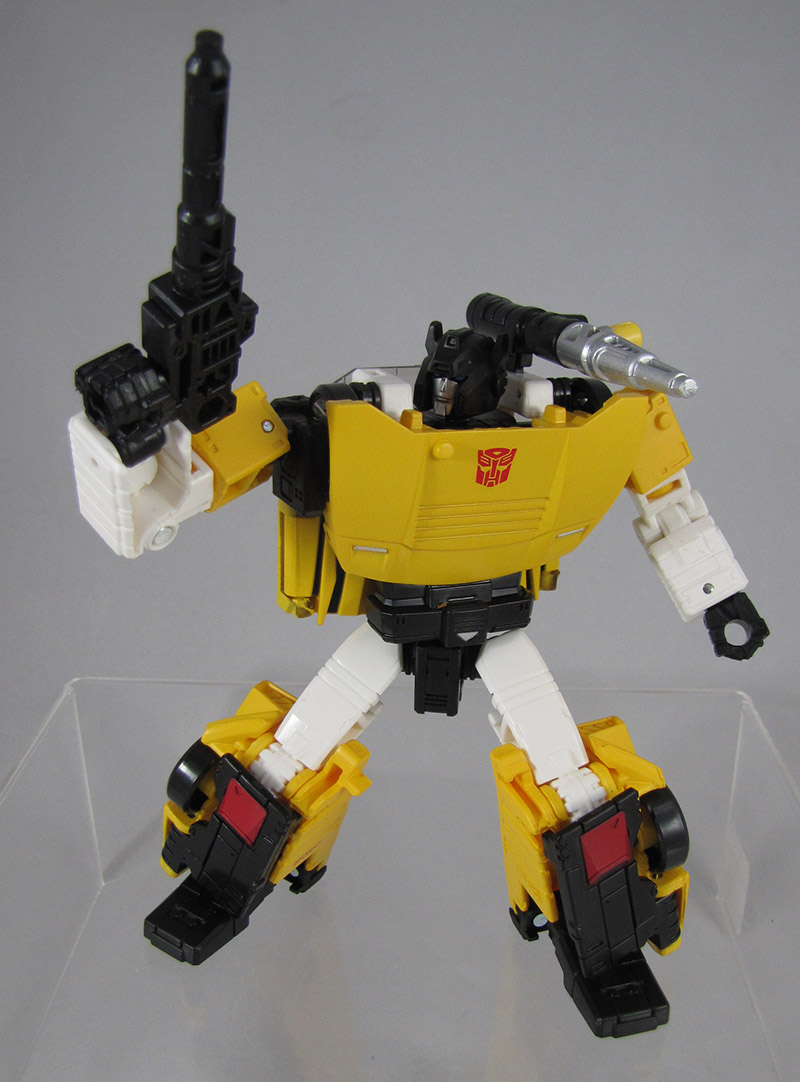 Back in the early preproduction days of Transformers, Sunstreaker was gonna be a yellow Sideswipe and Sideswipe was gonna be a red Sunstreaker.  That's why Sideswipe's profile mentions all this stuff like rocket boosters and piledrivers that Sideswipe's toy didn't have but matched Sunstreaker's toy pretty well, and why Sunstreaker had red stickers on his shoulders -- they were supposed to match his car mode but when they changed the color to yellow, they didn't alter the stickers to match. 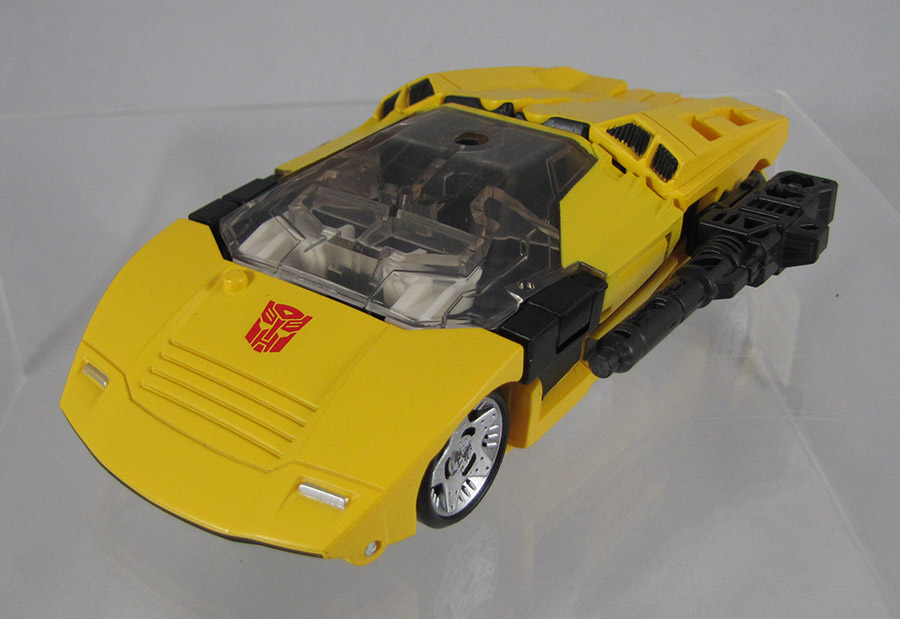 Thus Tigertrack, a yellow redeco of Sideswipe, is basically a Preproduction Sunstreaker toy.  He is now his own guy with his own name, though!  His personality is... that he has a lot of scanners.  Very good scanners.   Incredible scanners that are of no help to him in any of his trivial fictional appearances, it seems.

Sometimes he pals up with Stripes, the Autobot tiger cassette!  Stripes is similarly a character based on preproduction material, and their names are both tiger-based.  I guess it makes thematic sense.

I was kind of underwhelmed when I got him, since even though he was New Toy of a New Character (to me), he's just... he's just Sideswipe with yellow instead of red.  That's why I often feel lukewarm on Diaclone/Pre-Transformer rehashes.  They're just not very interesting colors!  It's just swapping one primary color for another.  Throw some purple or teal in there!  I need razzle dazzle! 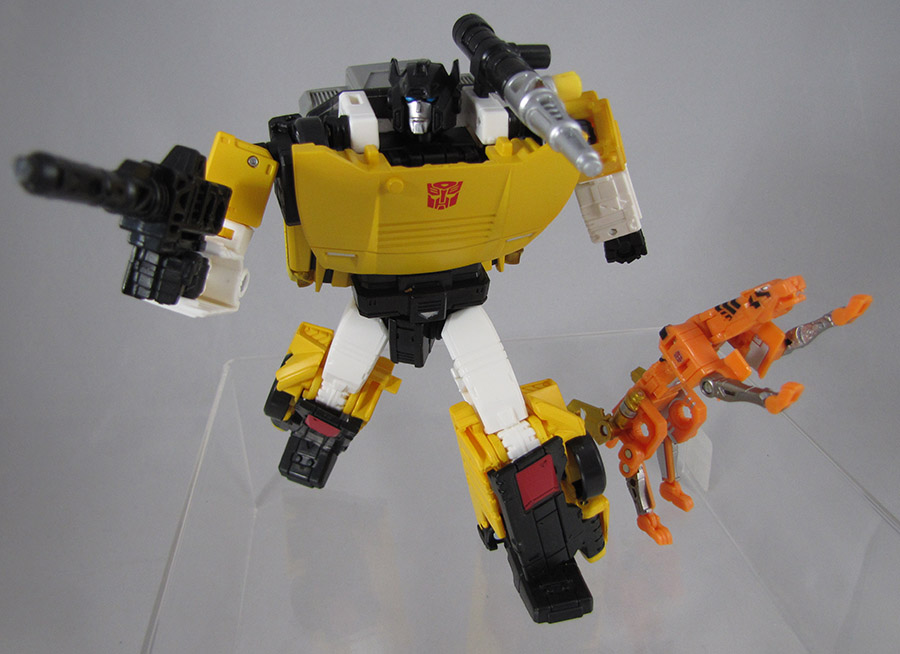 His yellows are entirely painted instead of bare plastic, like Sideswipe's reds, so that is nice, at least. 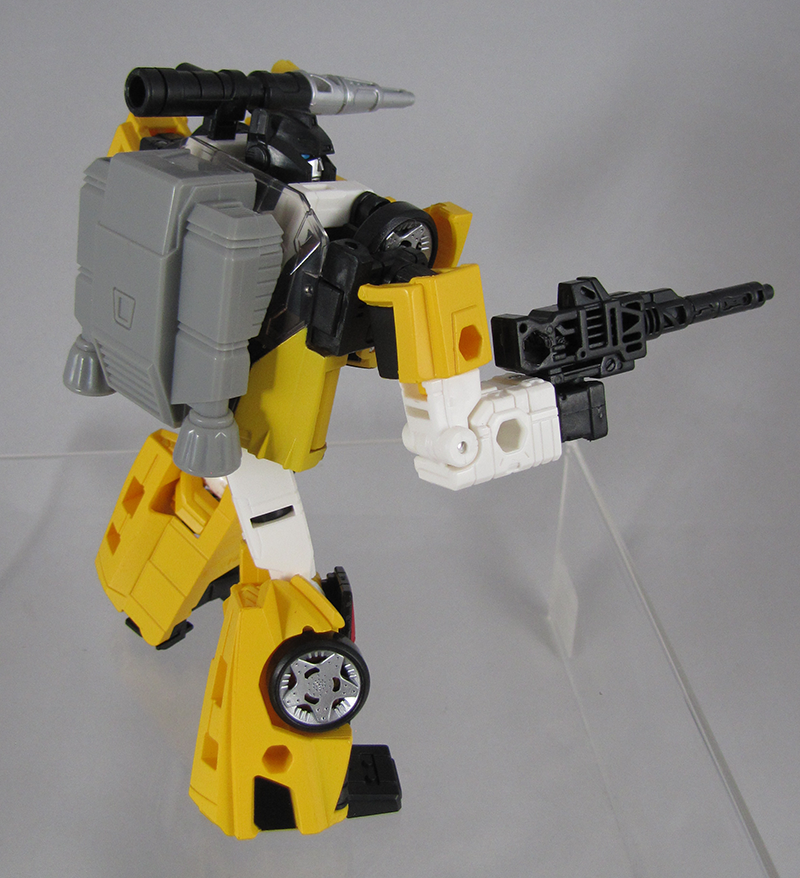 Tigertrack is one of those Generations Selects online-only exclusives, and GameStop claimed an earlier delivery date, so I preordered from them, they indeed got theirs in early, and so that's why I have mine now.  If you ordered him from anywhere else, don't freak out about not having him yet.

I like to give my Tigertrack the Sideswipe Rocketpack accessory from the Centurion Drone set, because that's a thing Sideswipe only has because they wrote him as Sunstreaker's toy, so it seems appropriate.

Stripes and the rocketpack are sold separately.