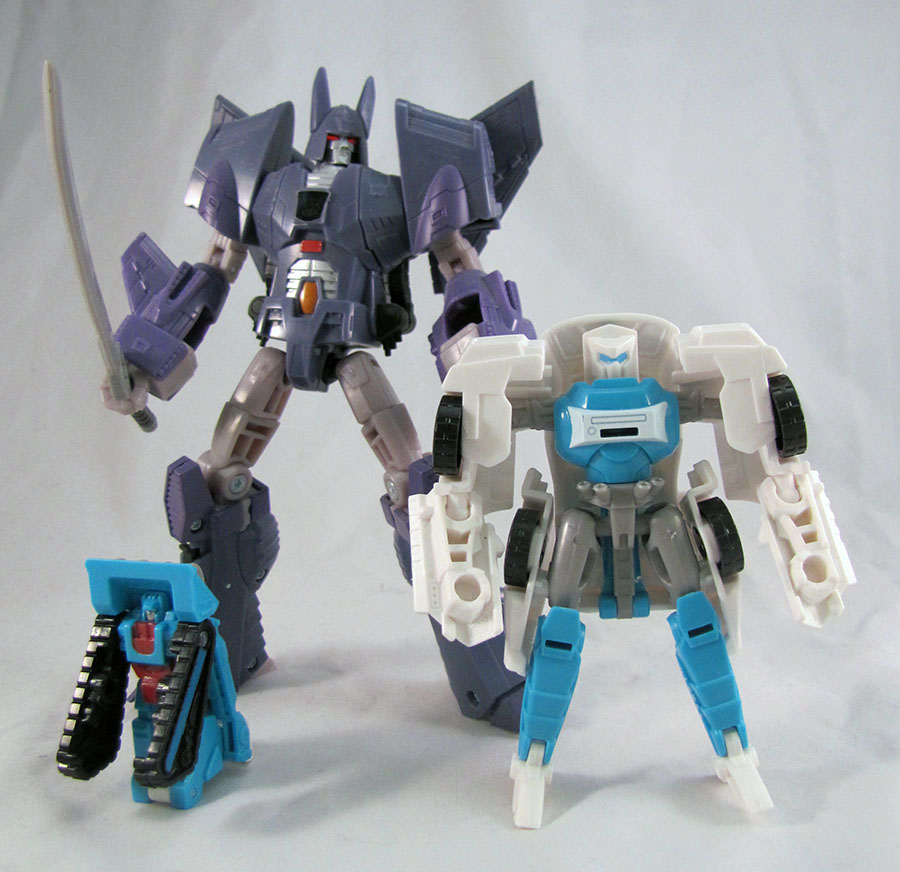 A few years ago, Tailgate was just that guy with the tech spec that was about how he's some wacky dude who believed all machines were sentient beings and talked to them as if it were true.  I mean, it's a fun Budiansky-esque concept, but it's funny how quickly such things are buried under the waves of Actual Longterm Characterization.

In the More Than Meets The Eye ongoing comic book, Tailgate's naivete is taken in another direction.  He is technically about two-weeks old when we first meet him, even though he fell in a hole and slept in it for several million years until the present day.  So he doesn't know about the Autobot/Decepticon war, he doesn't know that he shouldn't go make friends with Cyclonus, he doesn't even know who Optimus Prime is, and he doesn't know not to let Swerve start rambling at him, though he picked up on that one pretty quickly. 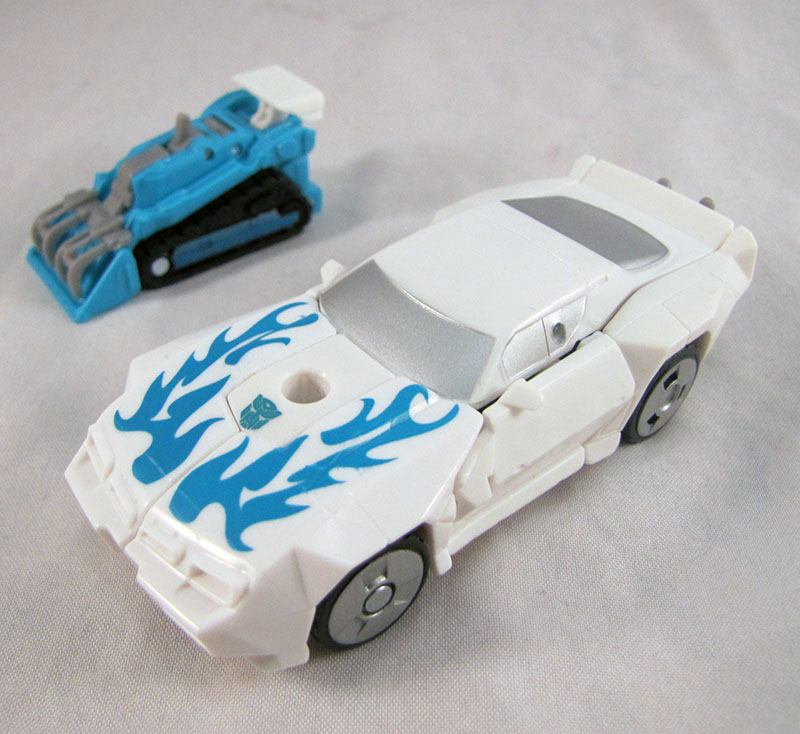 All this is why I am overjoyed that Generations Tailgate (like Swerve before him) is based on his Nick Roche (I believe) design from More Than Meets The Eye.  Sure, he's white in places where he should be blue and vice versa, and he transforms into an Earth car instead of a Cybertronian one, but he's definitely that little adorable design.  And so I neeeeeeeeeeeded him.  I especially needed him back in like December when we thought he'd be out already and so I drew him into a Dumbing of Age strip, fully expecting him to have hit retail by the time my buffer got eaten up to that far.  For the longest time, the most unrealistic thing about Amazi-Girl was that she owned a Tailgate toy.  Well, no longer!  He's out, both at online stores and in United States brick-and-mortar stores as of a few days ago. 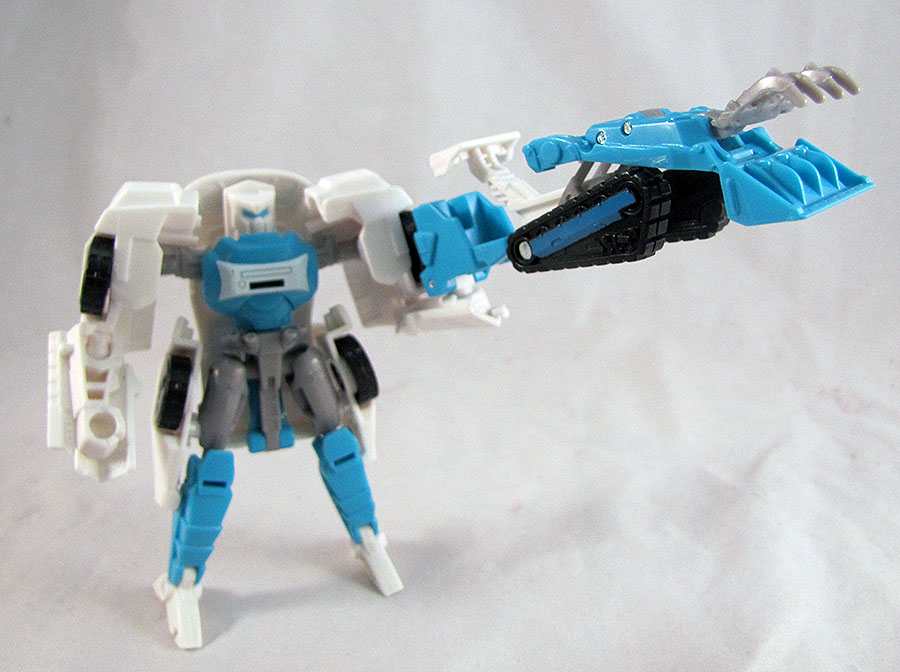 Tailgate is more complicated than he looks.  He's definitely still a Legends Class-sized guy, with the lack of a rotating neck joint -- NOPE IT MOVES HOORAY just from lower than you'd think -- and otherwise simplified articulation, but his torso does all sorts of crazy things.  The easist way to lampshade it is by pointing out that his exhaust pipes, which stick out the back of his vehicle mode, are placed in the middle of his robot mode torso.  You pull half of his torso down, pull the rest of his torso up, and then try to wrap stuff together to form a car.  Not bad for a Tailgate toy, considering the original required only that you fold his legs down.

He comes with Micromaster partner named Groundbuster, based on the original Neutro troy.  He's there.  He makes some sort of weird claw thing.  I suppose a weird claw thing is useful if you're a waste disposal guy like Tailgate, so sure, whatevs.

(This review uses male pronouns, but it's distinctly possible that the jury is still out on that.)

Within the past two waves of Legion Class (the smallest!) Transformers toys, there've been some older guys redecoed into new folks who otherwise don't have toys. And I'll pick them up! Why not? New guys!  Plus two of them were molds I hadn't owned before.

Flamewar is the most interesting character choice.  The original Flamewar was a BotCon 2005 exclusive toy and since then she has only appeared in BotCon and Collectors' Club-related materials, until now.  Like before she's a redeco of a motorcycle Arcee toy.  But now she's got a grudge against Arcee as well!  ...basically, she's Airachnid.  But now in that "I hate you and want to kill you but I am also wearing your skin" sort of way.  Her packaging art doesn't dispel any creepiness.

There's also Fallback, which is what Hasbro has to call Outback these days for steakhouse reasons.  (Yeah, it's a restaurant, but they also hold the trademark for toys for some reason.  Probably merchandise.)  Fallback is a redeco of Legion Class Breakdown.  Like Flamewar, he hasn't been mentioned on the cartoon, but in the most recent episode, Optimus Prime ordered his troops to "Fall back!" and so I like to pretend that Fallback is always just off-screen where we can't see him and that sometimes Optimus Prime yells at him.

Tailgate has been mentioned and seen on the cartoon, as he is Arcee's notorious first ill-fated partner.  He was a redeco of Cliffjumper in the cartoon as well, so this is a good use of the Cliffjumper Legion Class toy.  His transformation is crazy and I love him.  It's amazing how much versatility you can get out of a pile of ball joints.  He's seriously impressive for his size.

If you don't care about getting new characters, I'd still get Tailgate just for the hell of it.  He's pretty and his toy is a neat thing to keep around in your pocket.
Tags: transformers prime, tailgate, fallback, flamewar
View/Post Comments
Page 1