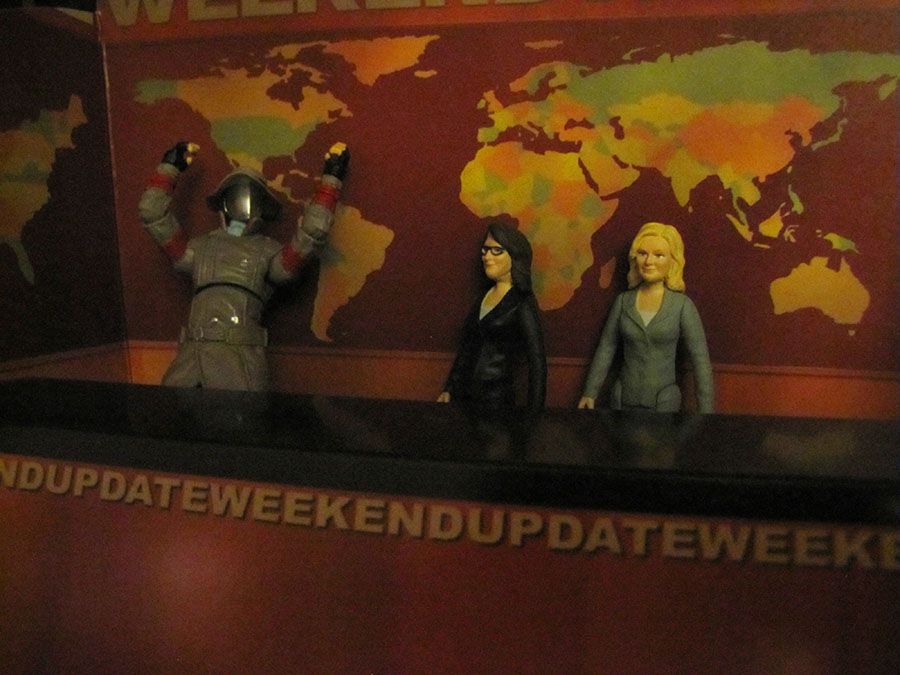 Look, there are toys of Tina Fey and Amy Poehler.  So of course I bought them.  There was no other rational choice.

Entertainment Earth had an exclusive set of the pair (plus a fold-together version of the Weekend Update set) on sale at SDCC this year, and I'm not really sure there's anything more I could have wanted.  (well, okay, maybe to-scale castmembers from both 30 Rock and Parks & Rec)  Each of them has four points of articulation -- shoulders and hips -- and is ... I'd say probably original GIJoe:Real American Hero scale?  Old Snake there outsizes them by a bit, but modern GIJoes are relatively huge.  Amy Poehler's likeness is uncanny, while Tina Fey's is a little weird.  It's probably the glasses.  It's hard to sculpt glasses on something that small and not have it look off.

They sit on my VCR/Blu-Ray shelf, and I was dumb and took this photo at night when the light's kinda crummy.  Every day I'm like "I'm gonna photograph these guys before it gets dark!" and then every day it gets dark and then it's a month passed and NO MORE GOD DAMMIT, HERE THEY ARE.

The original version is sold out, but a rerelease with a new backdrop is up for preorder.