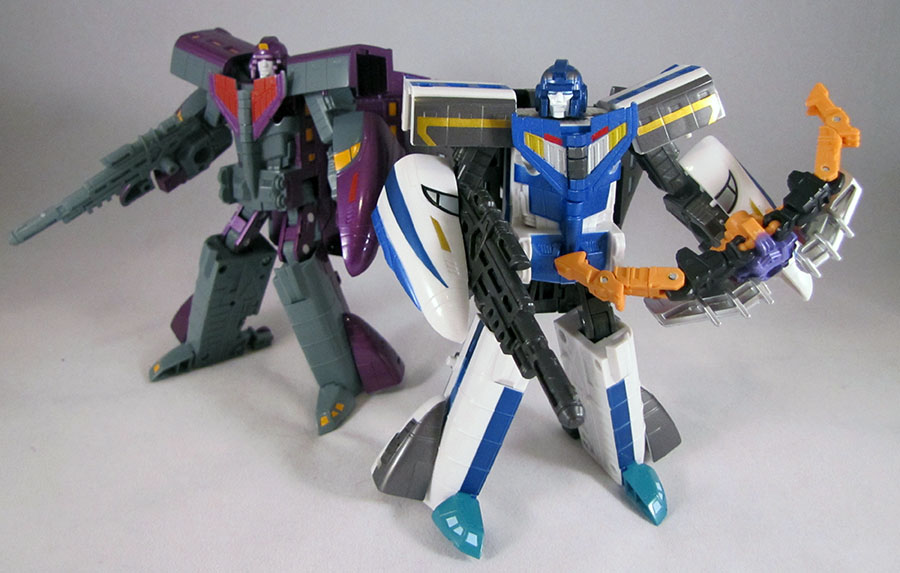 This is Shouki!  You probably don't know who he is.  I'm a living Transformers encyclopedia and I barely know who he is.  This is because he shows up in the Japanese-only series Headmasters, which is dull-as-rocks -- the Headmasters anime was that awkward growing pains period when Takara was seemingly trying to tell Transformers stories our way, but failing, before they say "screw it" and go full-on "this is stuff we know how to do well" the next year with Masterforce.  Anyway, this is Shouki, the leader of theTrainbots.  In the terrible English dub that aired in Southeast Asia at the time, his name was Grimlock.  Yup.

This exclusive toy from Japan interested me because it's finally a toy of Classics Astrotrain as a new character.  Everyone else except Classics Megatron got one of those, and for the past nine years I've been hankering for that Astrotrain toy to be shoehorned as some other character.   I mean, I know why that hasn't happened -- he's a Triple Changing space shuttle/bullet train, and there aren't any other Triple Changing shuttle/trains in Transformers.  But that's why I wanted to see it done.  Like with the Cloud Rodimus I talked about a while back, I like seeing characters get new altmodes via redecoes of other half-appropriate toys.  Shouki transformed into a bullet train, and he does so now.  He now also transforms into a space shuttle. 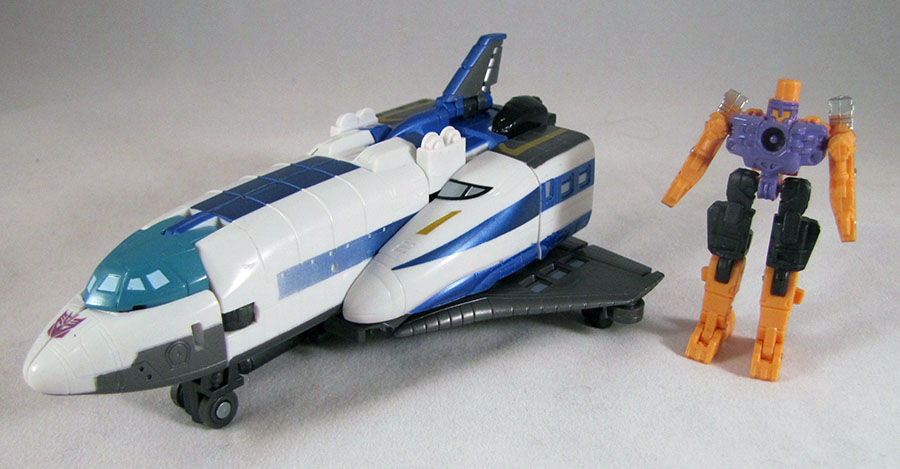 Now here's where it gets wacky.  It was decided that Shouki's shuttle mode is actually Shouki disguising himself as Micromaster Skystalker's shuttle base, the Thunder Arrow.  To that end, he comes with a Mini-Con partner who transforms into a bow, recolored as Skystalker.  Get it?  Thunder Arrow?  A bow?  And this Skystalker decoy is actually Daniel Witwicky in an Exo-Suit.  WHAT.

Daniel has a little trouble being Shouki's bow, though.  Shouki has some forearm kibble that doesn't really want any wide weapons with 5mm pegs to attach there.  You can force it to make it work, but it's not fun or intuitive.  The whole convoluted idea was that close to being perfect, if not for that detail.  But don't worry, it makes up for itself in other areas.  While Shouki is in bullet train mode, Daniel can be contorted into a new configuration and attach to the top of the train to complete a "Pantograph Mode."  In other words, he becomes the TV-antenna-like contraption you see on top of electric trains that connect them to the power lines above.  This is both ingenius and hilarious to me.  I really like this. 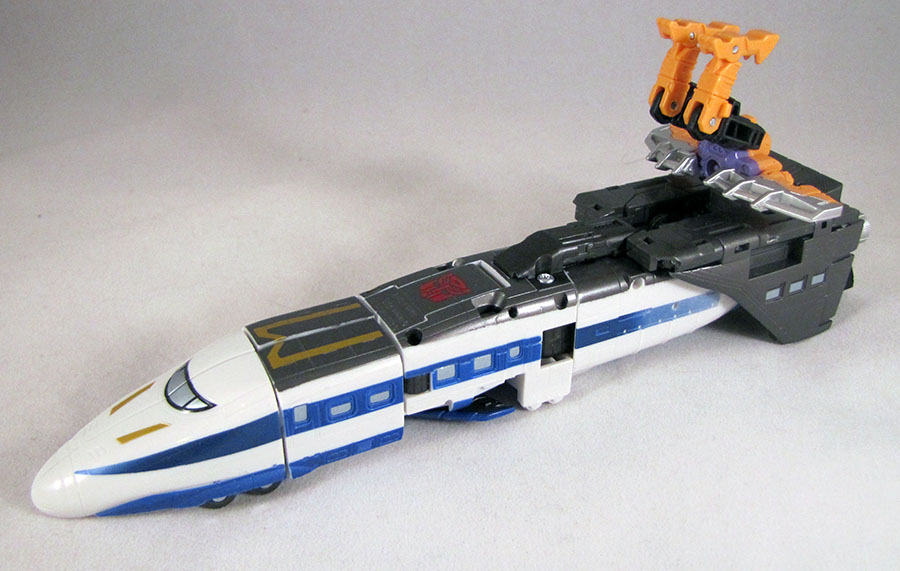 Shouki himself is very well painted.  The stripe that runs down the side of his vehicle modes even has a gradient.  He's a pretty toy.  However, his colors are pretty close to the colors Astrotrain got over here in the United States back in 2006.  Our Astrotrain was white, like Shouki.  Japan's was dark gray and purple, and so there's no conflict over there.  I lucked out, though, since I'd replaced my Hasbro Astrotrain with a Takara one a few months ago because my white one had yellowed due to age.   And so I have no color scheme overlap.  If you still have an original Astrotrain, though, owning this guy might be harder to justify.

NOTE!!!!: People keep asking me where I'm going to put my reviews after the Shortpacked! comic ends.  The answer is here, still.  This website ain't goin' no where!  And when I get new toys I wanna talk about, I'll still talk about them here, same as I always have been.