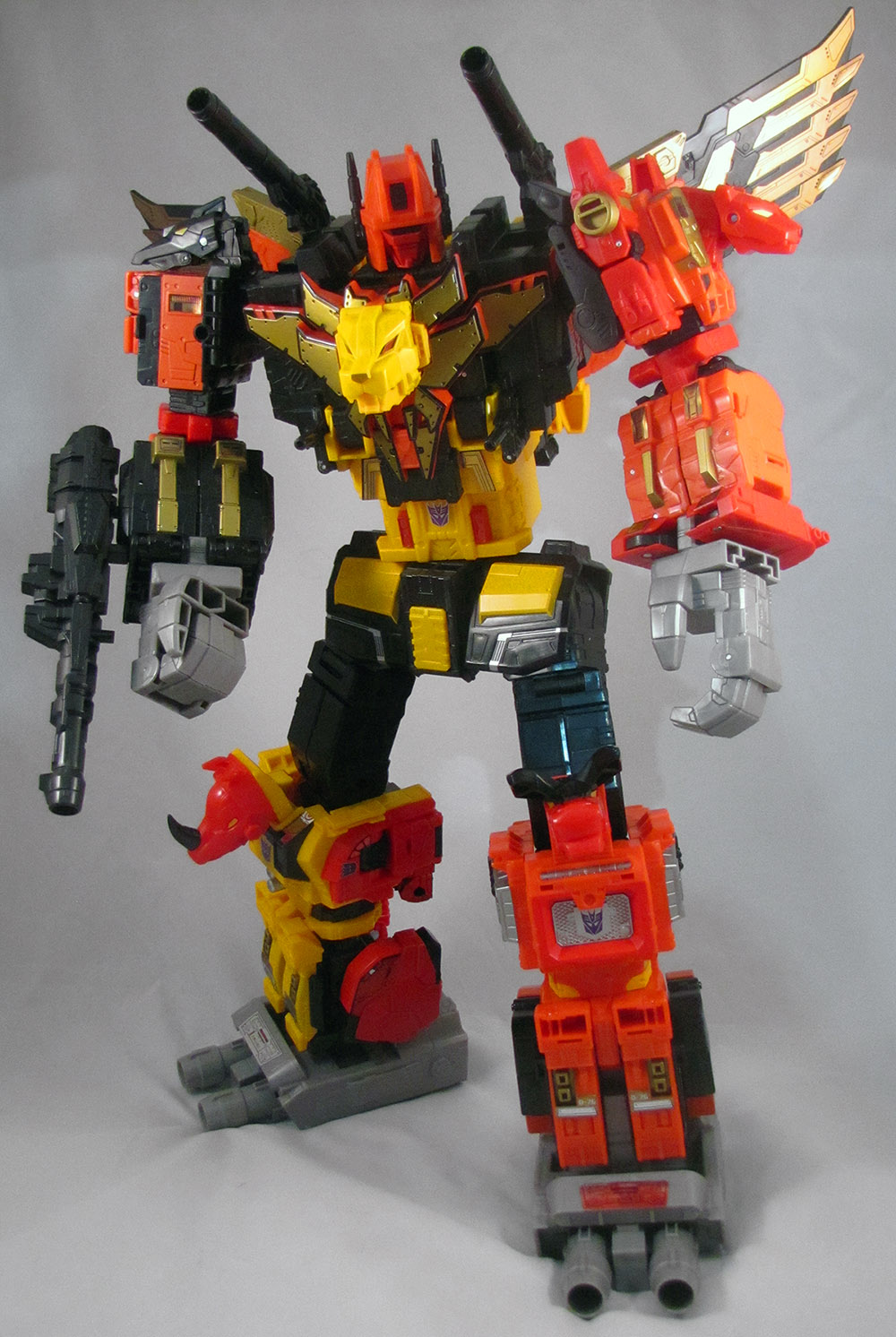 Masterpiece Dinobot showed up to monopolize my world just before I could get to talking about Power of the Primes Predaking, but now that MP Dinobot fever has died down a smidge, I'm ducking back to those simpler, more primitive pre-MP Dinobot times. 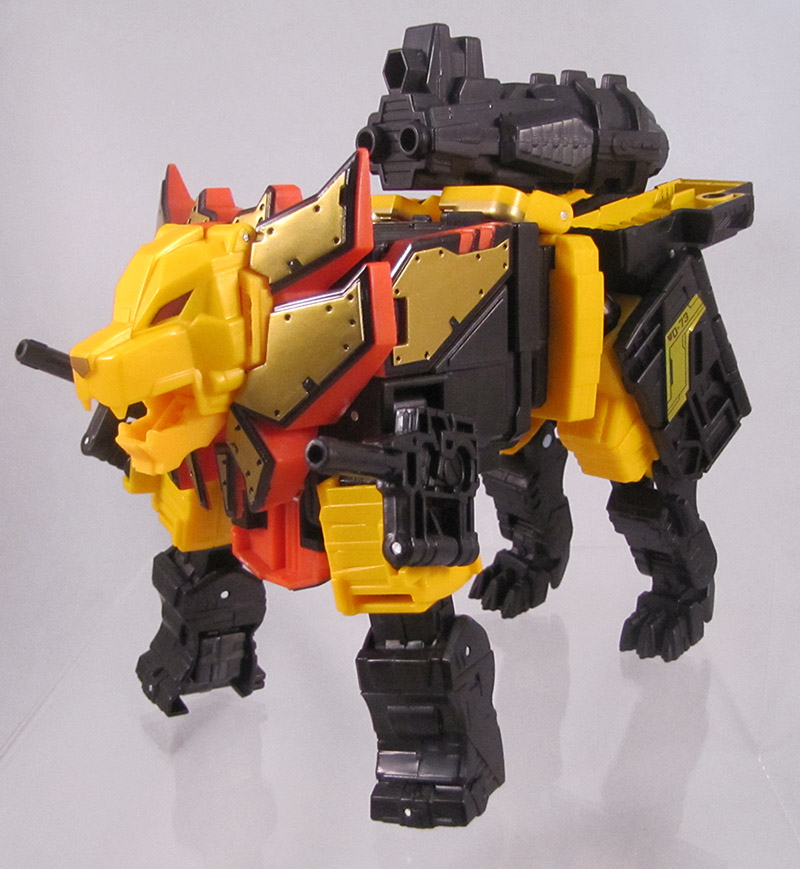 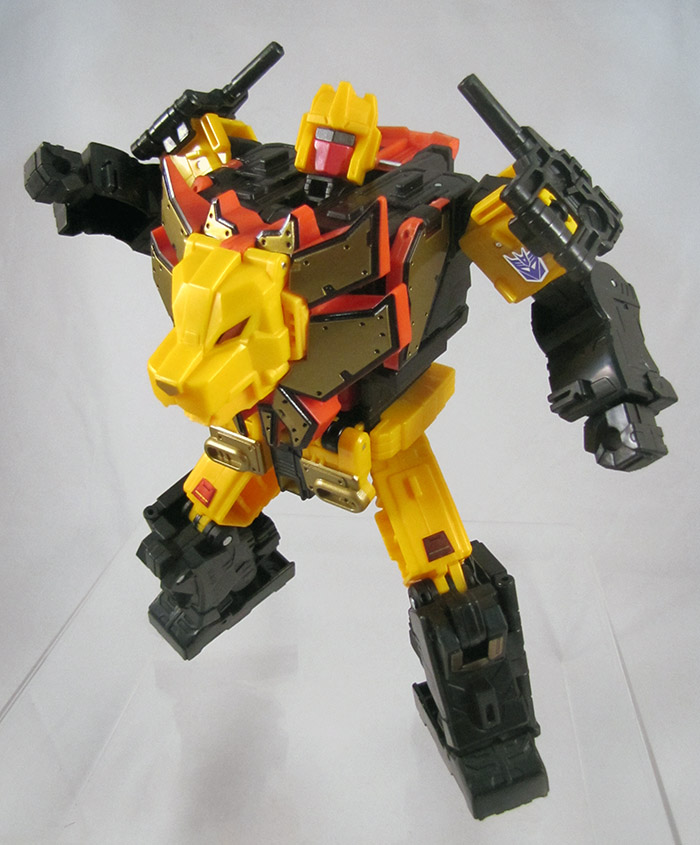 So, yeah, it's TITAN CLASS Predaking!  Titan Class is that once-a-year size class that costs $150 and bounces back and forth from being an irregularly-formed combiner (Devastator) to city-sized guys (Metroplex, Fort Max, Trypticon).  Predaking is the second combiner, and he's an awful lot like Devastator, the first!  Just, like, construction-wise.  He's composed of giant blocky dudes who are clearly just pieces to make a cohesive 18-inch-tall robot.  It's the same feel all over.  If you have Devastator, you know generally what to expect with Predaking. 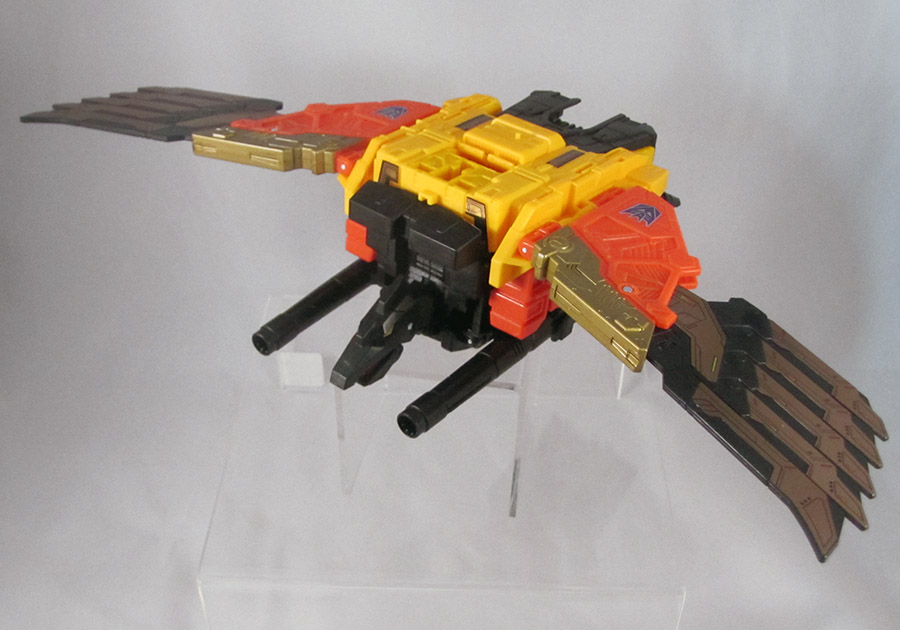 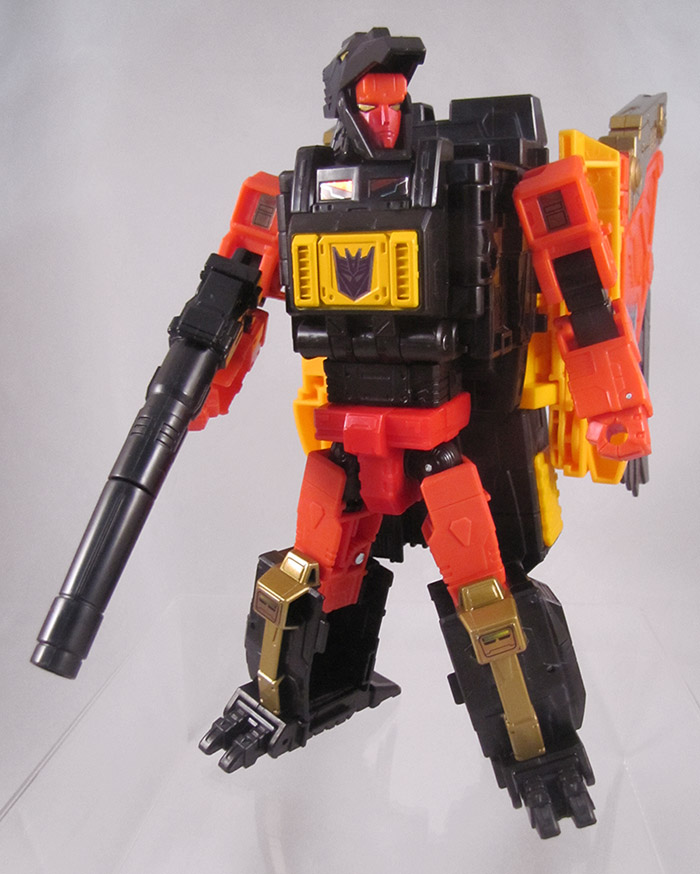 Predaking's a little less fortunate in this respect, though, because his individual components are ANIMALS.  Unlike construction vehicles, which are essentially blocks already, animals are, like, you know... animal shapes.  And so Predaking gives you... some blocks with tiny heads and legs on them!  They're animals!  Sort of!

I mean, this didn't matter to my toddlers, who looked upon these blocky creatures with a sense of frenzied wonder, but a more older-type person might be a little dissatisfied. 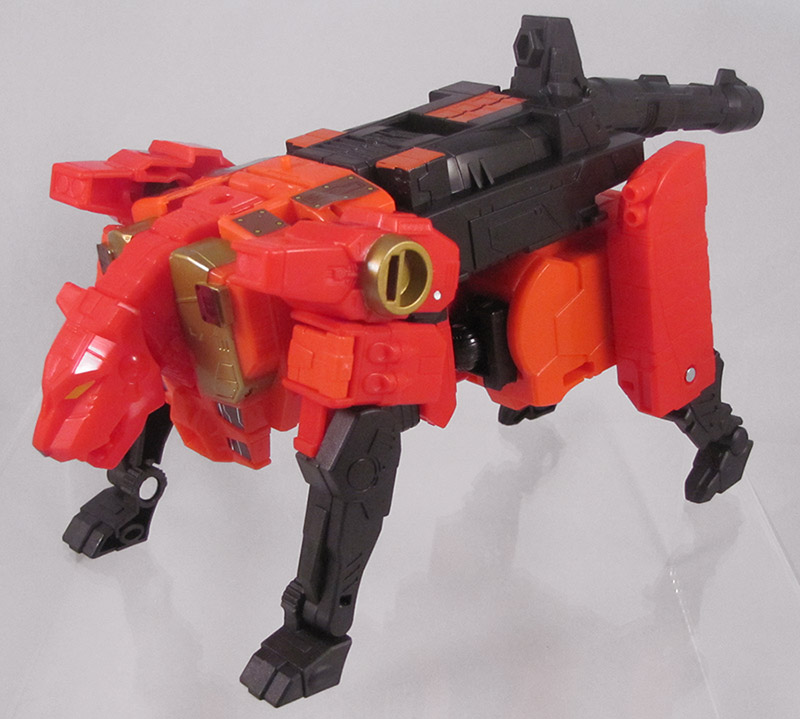 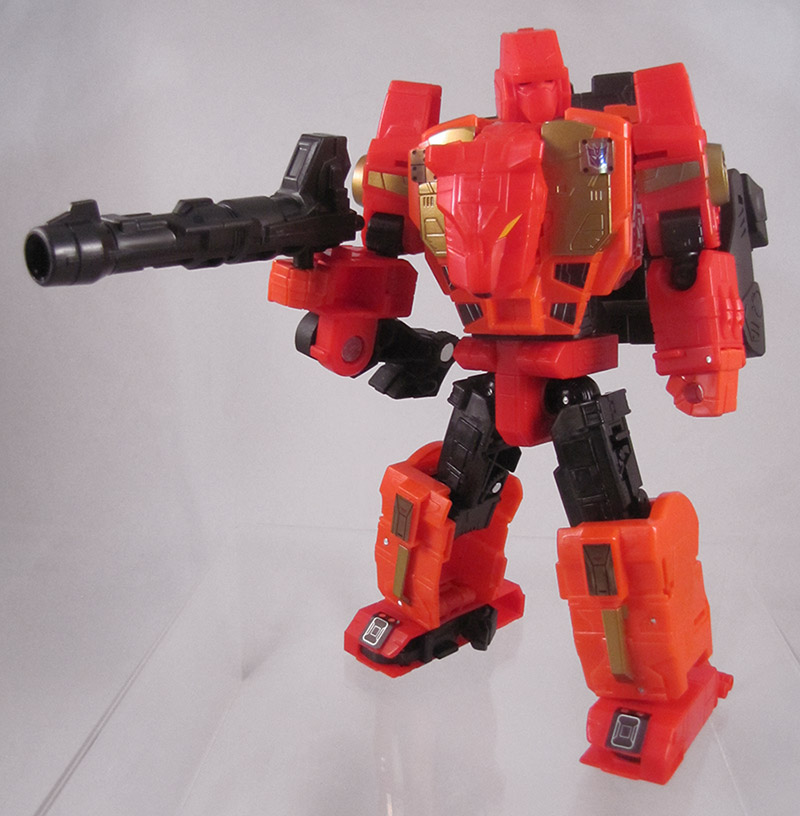 For example, the monstrously lengthy thighs of the combined Predaking robot ... just kind of hang underneath the bull (Tantrum/Torox) and the rhino (Headstrong).  Those are the two bulkiest animals (in real life), so they're the best choices to go with if you need to have two giganto plumpo creatures, but it's still a visible compromise.  Divebomb, the ... bird... is also pretty bulky, because he splits in two.  Half of him becomes an arm of the same girth as the other arm, Rampage (tiger).  The rest of him is, well, it's half of Predaking's torso.  It's his taint and his stomach and his spine and his wings, with Razorclaw (lion) forming the chest.  So Divebomb's a pretty massive bird!  Chunky! 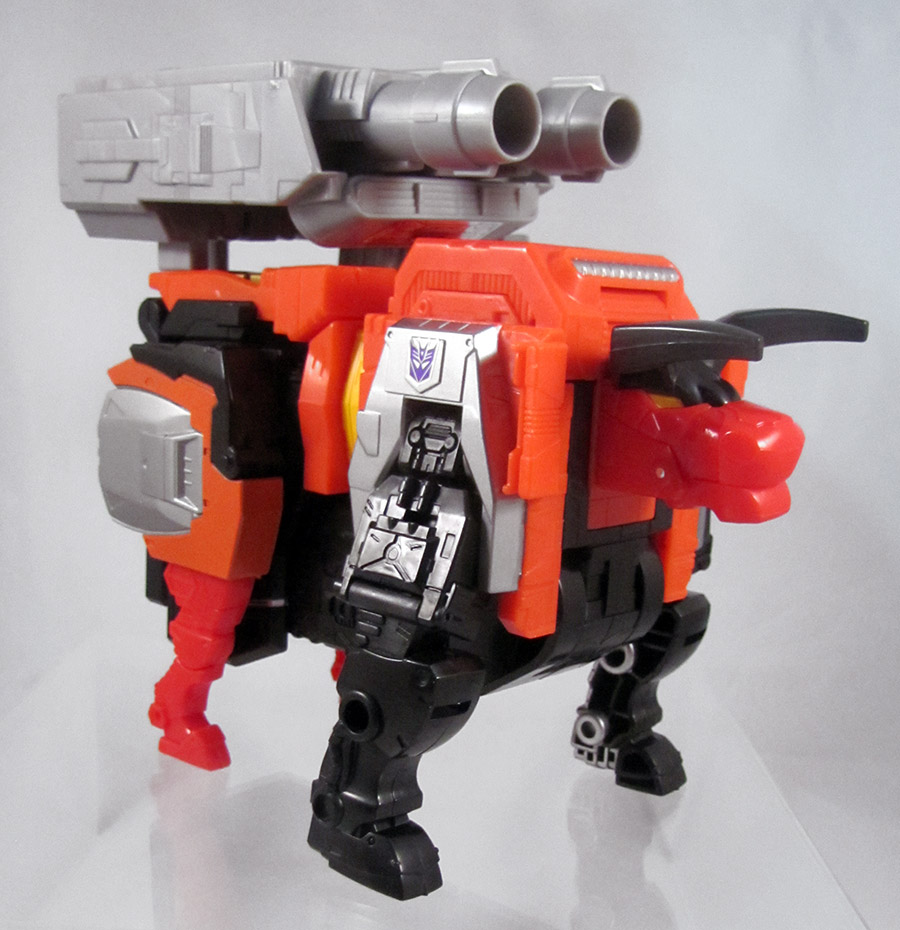 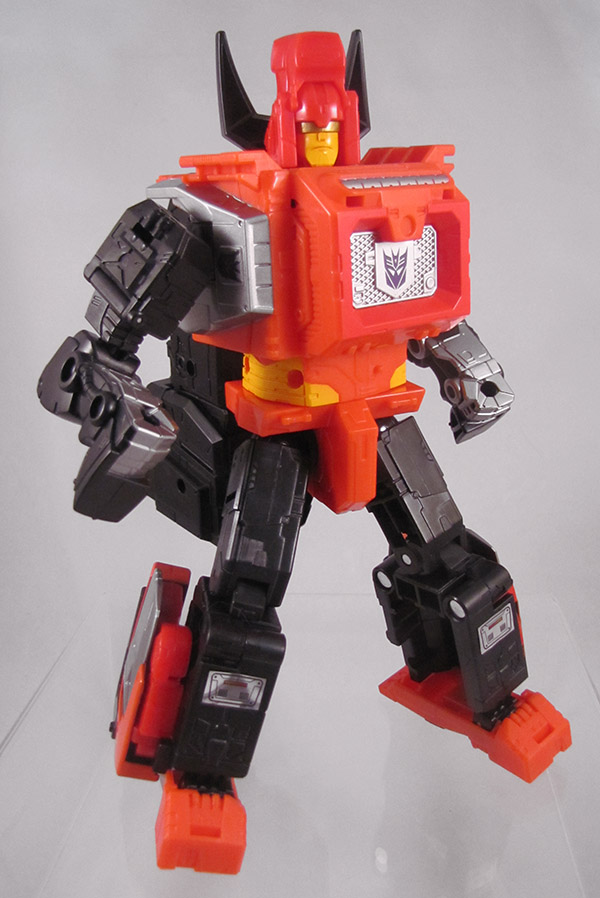 But, again, the combined robot is the main event here.  Everything else is subordinate.  And the combined robot is pretty good!  I like it!  It holds together and can do stuff and it looks nice.  And so that's how I'll likely display him, and it probably won't matter that he's made out of the blockiest jungle creatures ever seen.

The set comes with a sticker sheet, same with previous Titan Class offerings, but, oh my lord, the sticker material isn't terrible this go-round.  Like, you can remove stickers from the sticker sheet without the stickers TEARING DOWN THROUGH THE MIDDLE OF THE STICKER instead of, like, you know, where the actual perforations are.  And the material is strong enough you can actually remove and replace stickers if you have trouble putting them down, so long as you're careful. 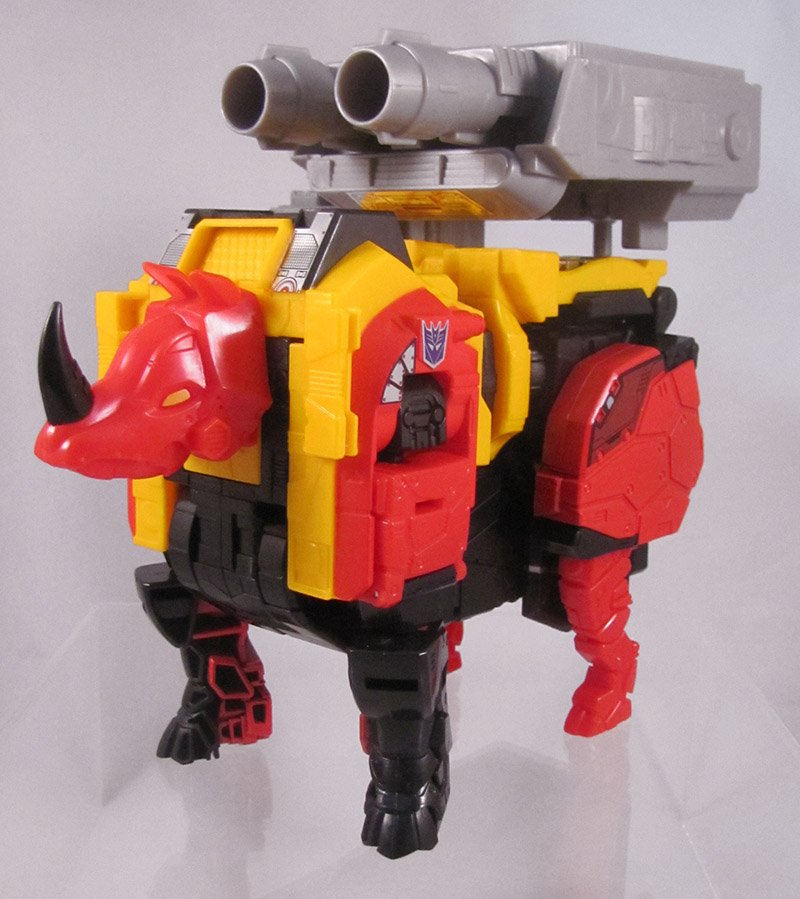 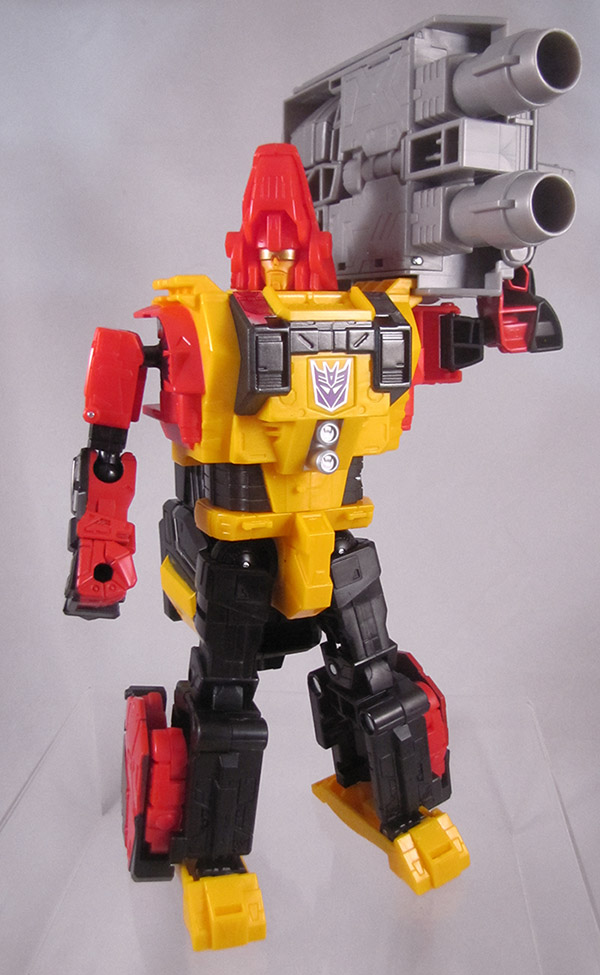 Oh, and Predaking comes with a Prime Master figure of Onyx Prime, which is the only way to get an Onyx Prime.  So, uh, hopefully if you were completist with those you were already planning on getting this guy. 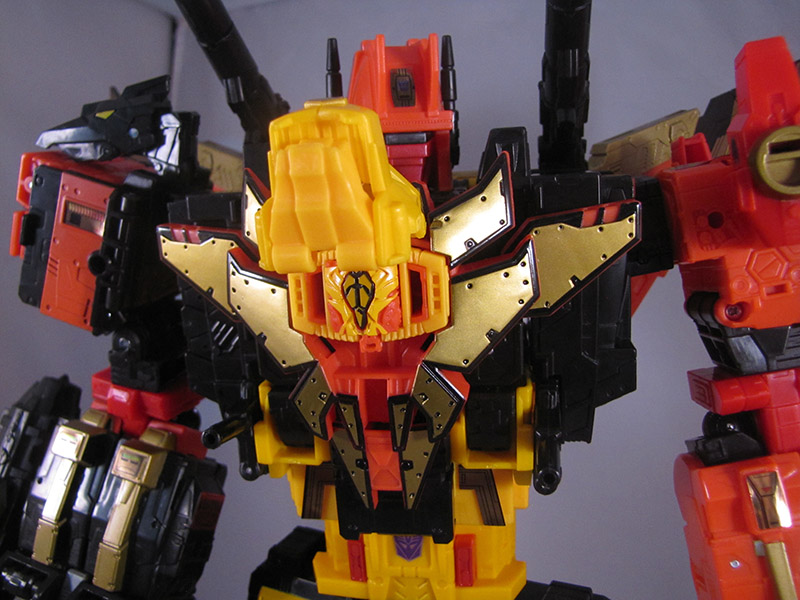 Anyway, summing up: Good big robot.  Smaller guys are an acquired taste.  A small step forward in sticker technology in this year of 2018.

Not content to release buttloads of single-bagged Transformers Kreon mini-figures into the world, Hasbro's also got a larger assortment that gives you four Kreons and some parts and tells you how to assemble them into a super-robot, G1-homage style.  There's Predaking, Bruticus, Superion, and Devastator so far, and I chose to do Predaking first.  He's, y'know, animals, which are awesome, and I've had quite a few redoes of the other three guys over the past few years.  Predaking feels the most novel.

As I said, there's just four guys in each combiner set.  The traditionally fifth guy you can find in the single-bagged assortment, and in the Predacons' case it's Rampage.  He doesn't help make the big robot.  He just gets to stand there and exist, completing the set of Kreon mini-figures.

True to most Transformers beasts, the beast modes of the mini-figures are pretty one-to-one, with arms becoming forelimbs and legs becoming hind limbs.  They're a bunch of crawling dudes with animal masks.  It's kind of adorable.  They get a new specialized piece, an all-purpose animal head.  There's holes in it various places so you can stick horns in there to make a crude rhino or a bull head.  The only one who doesn't follow this pattern is Divebomb, the eagle.  Divebomb's eagle mode is... not good.  And this is by Kreon standards, with the aforementioned crawling masked dudes.  You basically put horns in his feet and sit him down.  he doesn't even have an animal head helmet like the others.  Ah well.

The individual robot modes are what you'd expect.  The're Kreons, all based on the original Generation 1 Predacons.  You can attach some of the transformational extra pieces on them as the instructions show or you can just keep 'em bare.  Your choice.  Leaving off the flak jacket is probably a good thing to do with Razorclaw.  The jacket covers up the decoed lion head/mane on his chest just so you can hang the felt mane off his back.  It doesn't seem necessary.

There are several extra pieces to accomplish the combined Predaking mode.  There's a separate crotch piece included which forms the crotch of the super robot, plus some specialized pieces that help form biceps and thighs.  The thighs connect onto the extra crotch via a balljoint, and the biceps connect onto the shoulders of one of the mini-figures inside the torso.  You gotta remove the arms of the mini-figure to do so.  At the end, you've got two mini-figure torsos stacked inside the super robot torso, two whole mini-figures helping form the shins, and the remaining set of legs to be the hands.  It's not quite how the old combiner teams did it, which is why Rampage comes separate.  There's not anywhere for him to go.

There are pieces left over in both modes, which is sad but understandable given what's going on.

For ten bucks?  This is a friggin' bargain.