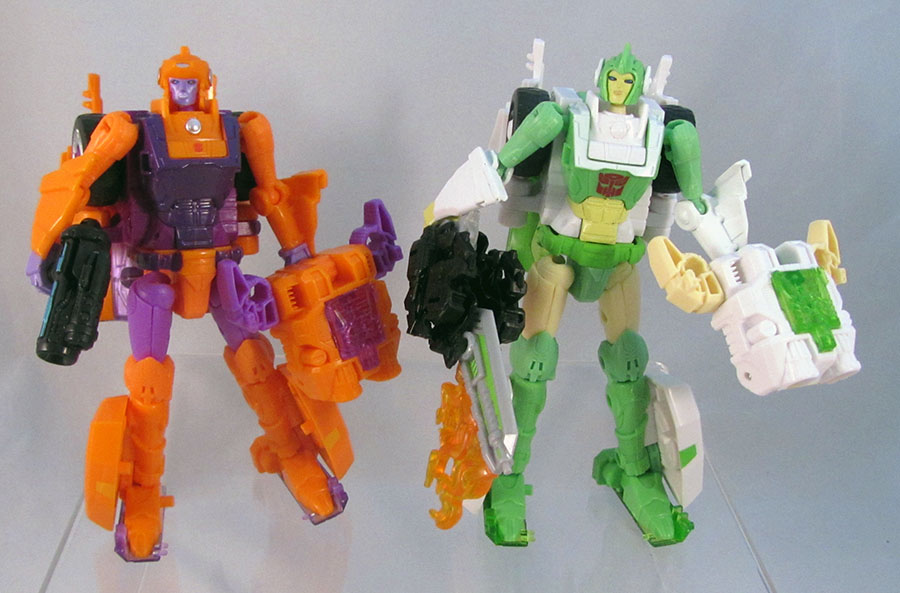 For decades, Greenlight and Lancer were known as "the green one" and "the orange one."  The original cartoon episode, "The Search for Alpha Trion," had named Elita-One (the pink one), Moonracer (the teal one), Firestar (the red one), and Chromia (the blue one), but there were two more Female Autobots appearing occasionally in the background who didn't get names until a bit of Transformers Collectors' Club prose.

And then years later, Mairghread Scott put them in the Windblade comic book series and paired them up, making them the first w|w couple to be depicted in Transformers fiction.

And now they both have toys! 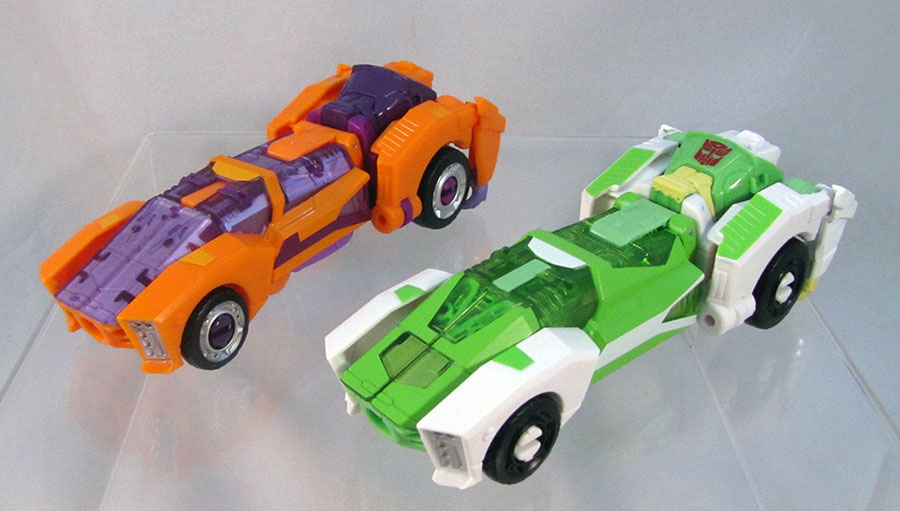 Power of the Primes introduced figures of Moonracer and Firestar, with Firestar being Moonracer with a new head, and Stege Greenlight and Lancer follow the same pattern, with Lancer being Greenlight with a new head.  Greenlight herself is the Moonracer/Firestar mold with some new thighs, forearms, torso, and head.  At the end of the day, this means Moonracer and Greenlight are the most accurate to their cartoon portrayals, while Firestar and Lancer have accurate new heads but with bodies that don't suit them as well.

(It's too bad, because cartoon Lancer has this whole layered armor look going on.) 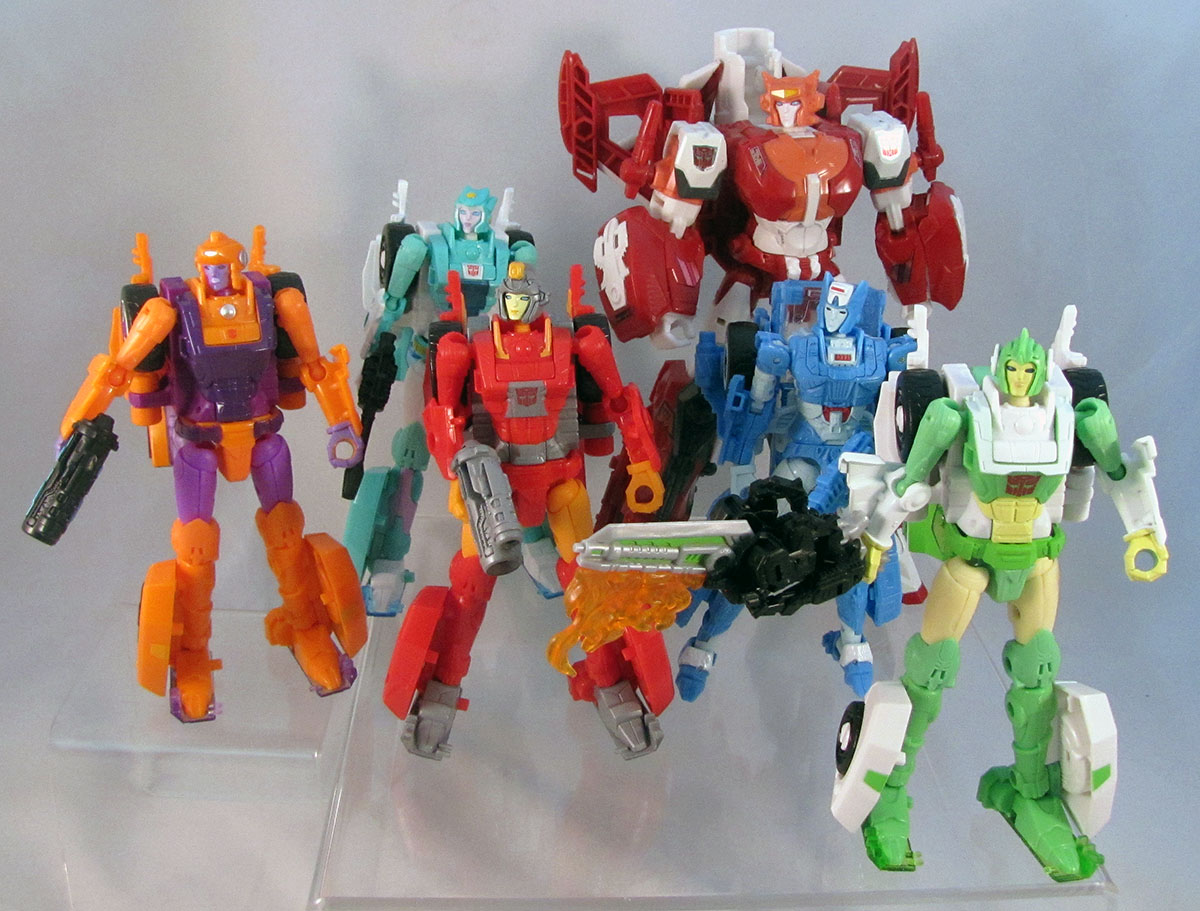 Other than surface details, the biggest change to Greenlight/Lancer versus Moonracer/Firestar are the new forearms.  The fists are no longer separate pieces, so those don't fold in during transformation to car or limb modes.  And the 5mm pegholes are removed entirely, which is a bizarre choice for a line that boasts 5mm pegholes everywhere for weapon compatibility!

Greenlight also comes with Dazzlestrike, a ... well, repaint of Battle Master Lionizer.  Literally the same plastic colors with some green painted on the blade.  Feels like a bit of a wasted opportunity to do something different. 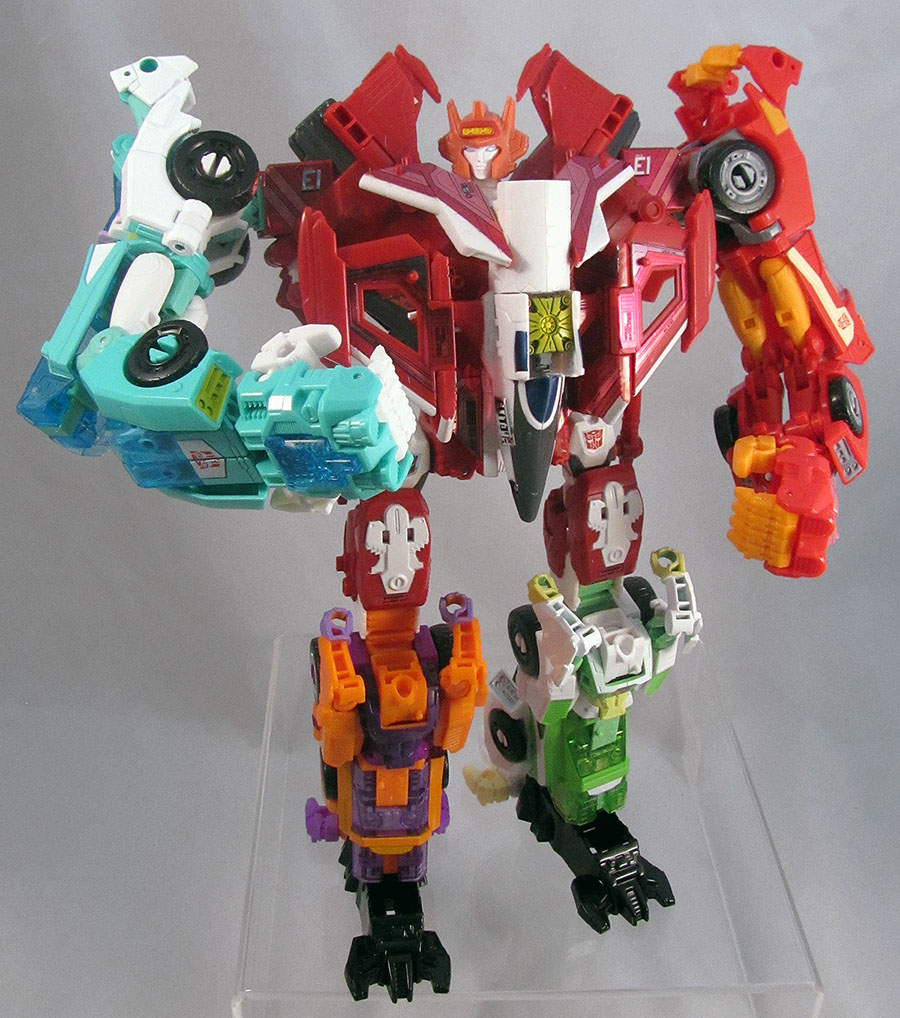 With Greenlight and Lancer out, you can finally complete ORTHIA, which is a combiner formed out of five Female Autobots introduced in "The Search for Alpha Trion."  You just gotta dig up your Power of the Primes Elita One, Moonracer, and Firestar.  Chromia's the only teammate left out, as she got a similar-but-retooled-to-be-combinerless toy in Stege's second wave.

And since there's been a handful of Alpha Trions, the arrival of Lancer means every new character introduced in that episode now has a toy!  That's pretty neat.

Since IDW's comic continuity was rebooted, it seems Greenlight's been shacking up with Arcee instead of Lancer, but I'm probably the last person who can point fingers at pairings being swapped around after a continuity reboot.

Lancer was debuted this weekend at San Diego Comic Con, and you can preorder her from Entertainment Earth, while Greenlight's over at Amazon.