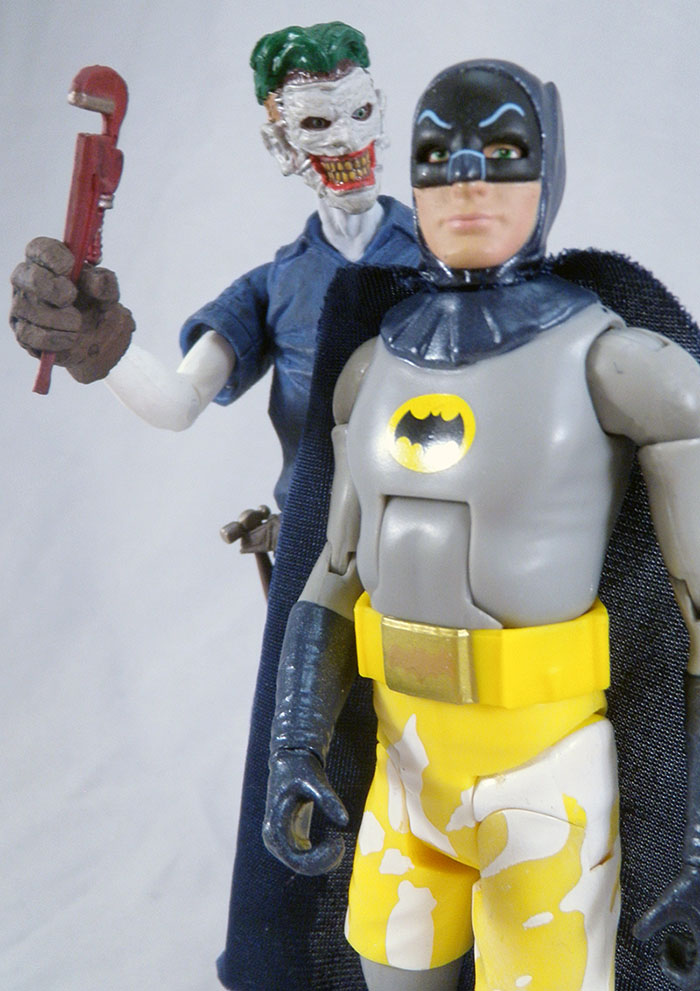 I've bought two Batman-affiliated action figures within the past few weeks, and it wasn't until I opened up the second one and set it down on the coffee table where the first happened to also reside that I realized, oh, okay, yikes, these two guys.  These two guys.

I'd bought Surf's Up Batman earlier from The Laughing Ogre.  I have a growing collection of various six inch scale Batmen that increasingly reflect Batman's history through the years and in various important cornerstone styles, and you really can't not have a 1966 Adam West Batman in a mix like that.  And when there are two possibilities and one of them is Batman in friggin' swim trunks and with a surf board, there isn't really any doubt which of the two is the one you should be going home with.

A week or so later, again at the Ogre, I picked up Death of the Family Joker, partly because we're getting a handful of Greg Capullo-styled Batman figures early next year which I will probably buy all of, and this Joker seems like he'd complete the set. 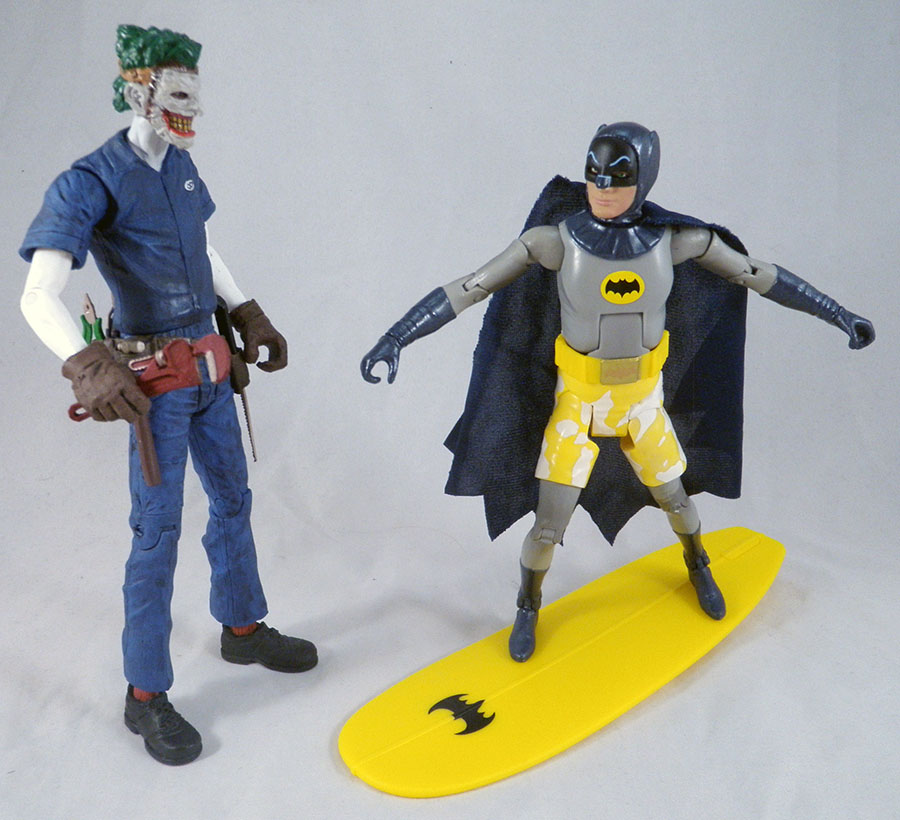 So what I'm saying is, my coffee table was a battle between Surfing Batman and I-Cut-Off-My-Own-Face-And-Wear-It-As-A-Mask Joker.  There may be no better incidental illustration of the ... spectrum of tones in Batman stories.

Need I remind you that Surf's Up Batman is based on the episode "Surf's Up, Joker's Down" in which Joker tries to steal the surfing skills of surfers in order to "rule the waves."  And Batman has to stop him because, you know, I guess it's a crime to rule the waves or something, hey, it's the Joker, you should probably stop him if he's doing stuff.

And, again, Death of the Family Joker is wearing his own cut-off face as a mask and killing more people before noon than cancer does in a year.  Because, you know, that's how you measure the awesomeness of a DC villain these days, how many dudes they kill in 22 pages.  I just can't see any reason to be into, say, the Riddler unless he's snapping necks left and right.

Jesus Christ, I have a buttload of Mattel to talk about.  I found the most recent wave of retail JLU on my way out of Columbus to C2E2, I got three more JLU sets at the con itself, and when I got home I had Ghostbusters Louis Tully.  Oh, right, and I got Action League Batman/Joker the day before I left.  Will have to get around to that some time.

Let's start with the Gray Ghost 3-pack set, then, I guess?

Also, there was lots of the actor who played the Gray Ghost throwing furniture around as the musical score pleasured itself.

The toy of the Gray Ghost is of the aging actor in the Gray Ghost costume, not the actual Gray Ghost, which is fine by me.  The latter is fictional, and so would look kind of weird standing in my display.  (You know what I mean!)  What's weird is that the Gray Ghost appears to be completely bald.  There's no paint for his hair behind his ears.  I remember the actor having thinning hair, not Lex Luthoring it.  Ah well.  Who's gonna be staring at the back of his head anyway.

It looks to me like Gray Ghost's got a new head, torso, and cape.  The rest is probably The Question or something.

The rest of the three-pack is filled out with character reuses, but that's fine by me.  There's the requisite Batman, and he's the JLU toy decoed like the Batman: The Animated Series design.  It works well enough despite having the wrong belt.  I like that the inside of his cape is blue.

The third guy is the Joker, because why the hell not.  Fitting in with the BTAS theme, this is the JLU Joker toy decoed like BTAS Joker.  This interested me more than I thought it would.  I mean, I definitely prefer my JLU Joker, but it tickles my brain in the right areas to see that toy done up in an earlier model's colors.  The purple suit's a smidge bluer, he's got the orange shirt, and his bowtie is teal.  With the hair being a dark green and his face painted up just a little differently, he passes off as BTAS Joker pretty damn well.  JLU Joker is just BTAS Joker with sharper lines anyway.  He's certainly a better BTAS Joker toy than any of the original BTAS Joker toys, but that's what 20 years of sculpting advances will tend to do.

Today's strip was about "Spine Buster" Batman, but it's far from the weirdest thing in the current Batman: Brave and the Bold wave of action figures. It's not even the only thing related to spinal injury infliction! There's also "Spine Shocker" Batman, who comes with a giant serrated taser weapon. And let's not forget "Chainsaw Attack" Batman who, yes, comes with a giant chainsaw. Batman's parents weren't killed by a giant chainsaw, so hacking his enemies' limbs off one by one is well within his moral code.

But, really, the strangest is "Kickpuncher" The Joker. I was in the middle of my honeymoon when my friend Graham alerted me to this toy's existence. It was that important. See, Kickpuncher is a B-movie superhero within the world of NBC's Community, which is absolutely the best thing on television. Kickpuncher's superpower is that his punches have the power of kicks. He is amazing and it is a crime that NBC's webstore has zero Kickpuncher merchandise.

"Kickpuncher" The Joker has to be a reference to Kickpuncher of NBC's Community.  I mean, come on.  What the hell else would explain this?  It's insane.  It's absolutely insane.  And it's so bittersweet.  Mattel was sure to put a "TM" symbol after Kickpuncher, so unless Mattel cranks out some Community toys, any Kickpuncher toy is gonna have some legal hurdles.  It's awesome and terrible at the same time.  My soul burns.

It doesn't seem fair, what with Batman coming after his spine with chainsaws.
Tags: batman, brave and the bold, community, joker, kickpuncher
View/Post Comments
Page 1