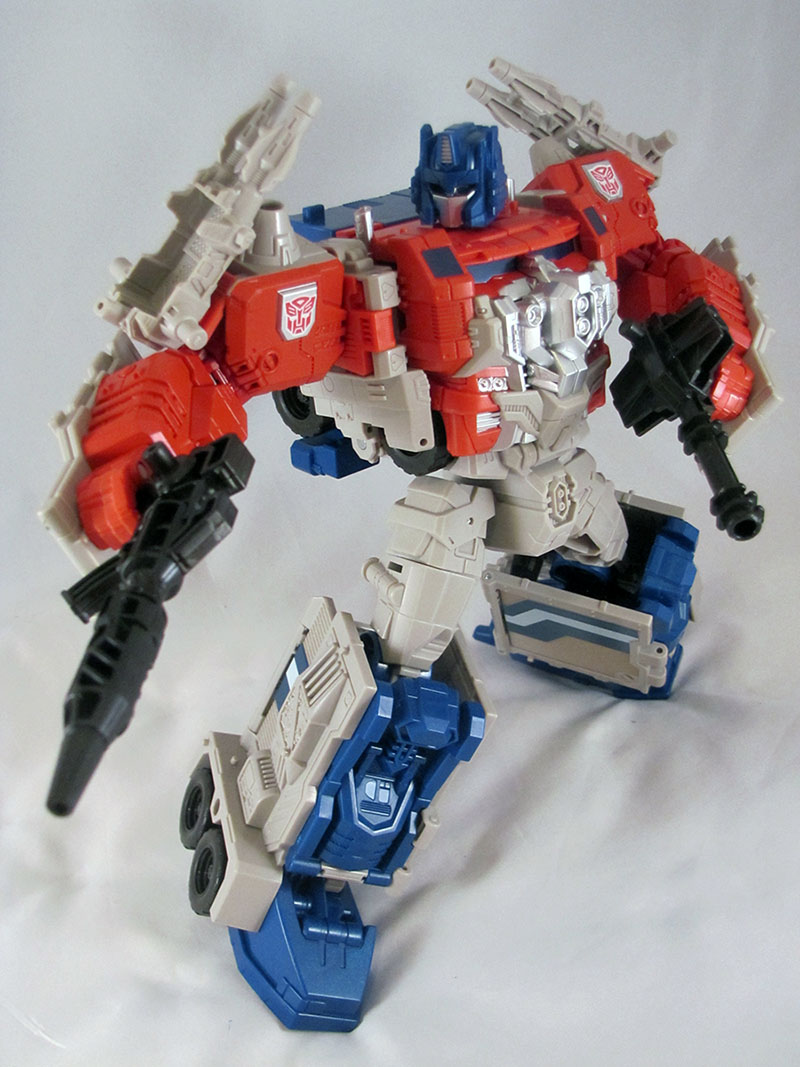 Look, I'll tell you right up front, I'm not going to be objective here.  Powermaster Optimus Prime was my first Optimus Prime toy, which I received only after four solid childhood years of pining for any Optimus Prime toy at all.  I had an Ultra Magnus, and I immediately tried to color his white cab robot with red and blue markers.  (he turned out kinda pink and baby blue, because washable markers).  Whenever I had the chance to pick up a ne Transformer from the store, I would choose whatever red and blue one was immediately available as some sort of surrogate Optimus.  That's how I ended up with Crosshairs and Cloudburst.  My desire was strong.  And so when I tell you that my first Optimus Prime toy, the 1988 Powermaster version, was the greatest toy of all time, maybe take some of my mania and nigh-tangible desperation into consideration.

Sure, he's not an entirely new toy -- he's a heavy retool of last year's Combiner Wars Ultra Magnus, but hey guess what, I loved Combiner Wars Ultra Magnus, so at least I knew this toy was going to be at least that good going in.  Titans Return Powermaster Optimus Prime takes that Ultra Magnus toy and gives him a new semi cab, new arms, new shins, a new chestpiece, new shoulder cannons, and a new head.  Some of it functions/transforms the same, some of it doesn't.  For example, Ultra Magnus was a car carrier, so his trailer had a lot of open air spots so you could see the smaller cars you loaded on him.  Powermaster Optimus Prime has a box trailer, and so a lot of this toy's new tooling goes to creating the walls for the box that is his new trailer.  Ultra Magnus had extendo-arms, Powermaster Optimus Prime has fold-out panels under his new arms that form the roof of the trailer.  Instead of open air, there is now a series of trailer wall chunks that wrap around Optimus Prime's legs in robot mode.  And so on. 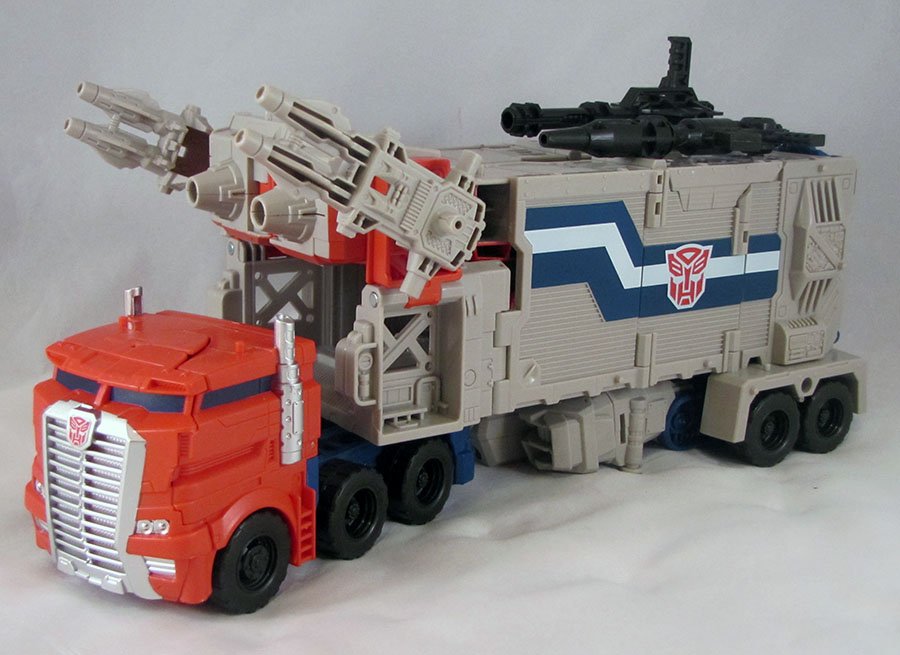 Unlike the original Powermaster Optimus Prime, the Titans Return version's cab doesn't transform into a smaller robot.  (Ultra Magnus's update didn't have that either, so no huge surprise.)  But, like the original, the new Powermaster Optimus Prime does have a third... base mode.  A third mode that is a base.  He's a triple changer and one of his transformation modes is a battlestation.  I'm trying to find a way to phrase this which doesn't imply he gets to touch your bathing suit area.  Let's start a new paragraph.

Powermaster Optimus Prime has a third base mode (DAMMIT) because Titans Return's deal is that everyone has a little head that can pop off and become a guy and live in the base modes of the Leader Class guys (like Optimus) or become the drivers of the Deluxe/Voyager Class guys and the much smaller Titan Master vehicles.  SPOILERS: Ultra Magnus didn't have a base mode, and so when they retoold Magnus into Optimus, the result is that Optimus Prime's base mode isn't terribly great!  He unfolds a little, pops a squat, and then the ramps you create out of his legs run right into his arms.  At least when transformed properly.  If you splay him out more, you can make those ramps run down onto whatever surface he's sitting on.  Eventually, if you have other Titans Return base mode guys (like Blaster and Soundwave and FORTRESS FRIGGIN' MAXIMUS) the ends of the ramps all connect and create a larger base. 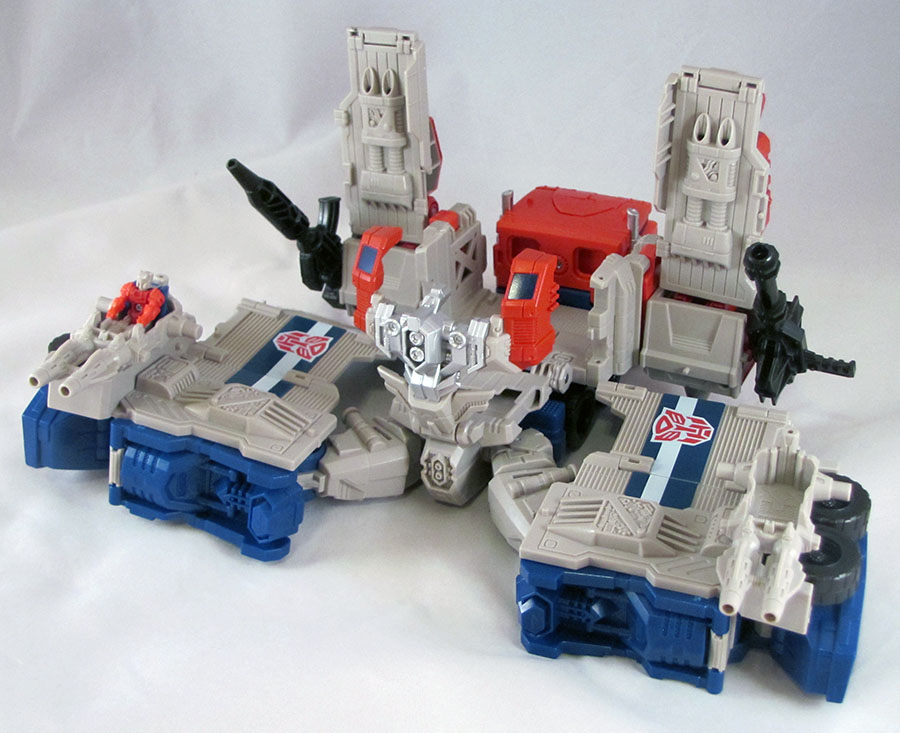 Likewise, Optimus Prime is covered with wee tiny bitty pegs that you can attach the little Titan Master head dudes to when they're dudes and not heads.  There's also seats and stuff, like inside Optimus Prime's new shoulder cannons.  (Optimus keeps the handheld rifles that Magnus had, the ones that combined into the staff of Magnus's hammer, but the parts that form the head of the hammer have been replaced by the new shoulder cannons.)

Since Optimus Prime is one of the bigger Titans Return figures, he doesn't have just the normal Little Head Guy interaction as the smaller guys.  To make his combination more proportional, there's this whole helmet contraption that fits over the entire little head to make his head bigger.  If you flip up the helmet, he's got a tiny Optimus-like head with a mouth.  The helmet of this tiny head is designed after the original Powermaster Optimus Prime cab robot's head, which is a nice callback.  The tiny head transforms into the robot mode design of the original Powermaster little engine partner guy, Hi-Q, but he's called "Apex" now and his colors are kinda off.   During transformation to vehicle mode, the helmet flips down into the semi truck cab and becomes a seat which the tiny head Titan Master robot can sit in.

Anyway, I love this guy.  He's a great robot, a pretty good truck, a transformation I already really liked with some more complexity added, but with an admittedly terrible base mode.  Seriously, the ramps he has run right back into his own walls.  But, eh, let's face it, he's spending most of his time in robot mode anyway.

Oh, and Japan is gonna heavily retool this guy AGAIN to make him look even more G1y, and I'm gonna buy the hell out of that one, too.  Just so you know.

I have a sickness.