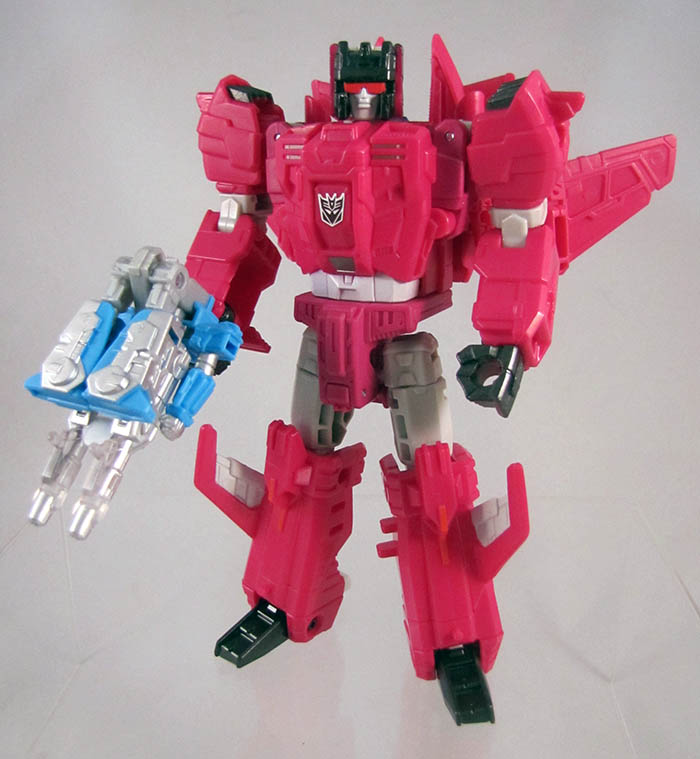 I'm thankful that TakaraTomy announced their plans for Misfire and Slugslinger before Hasbro's versions were available.  I didn't have such luck with Triggerhappy, who I ended up needing to rebuy.  TakaraTomy's versions come with their Targetmaster partners, see, and in Misfire's case, his is the most important Decepticon Targetmaster of all, to me, because of a terribly-presented scene in the original cartoon that had endeared itself to me.

Aimless, introducing himself: "I live only to destroy our mutual enemies!"

Misfire: "I think the name Aimless suits you better!"

Which, as presented, sounds like Aimless is saying his name is "Lives Only To Destroy Our Mutual Enemies," or at least Misfire believes so. 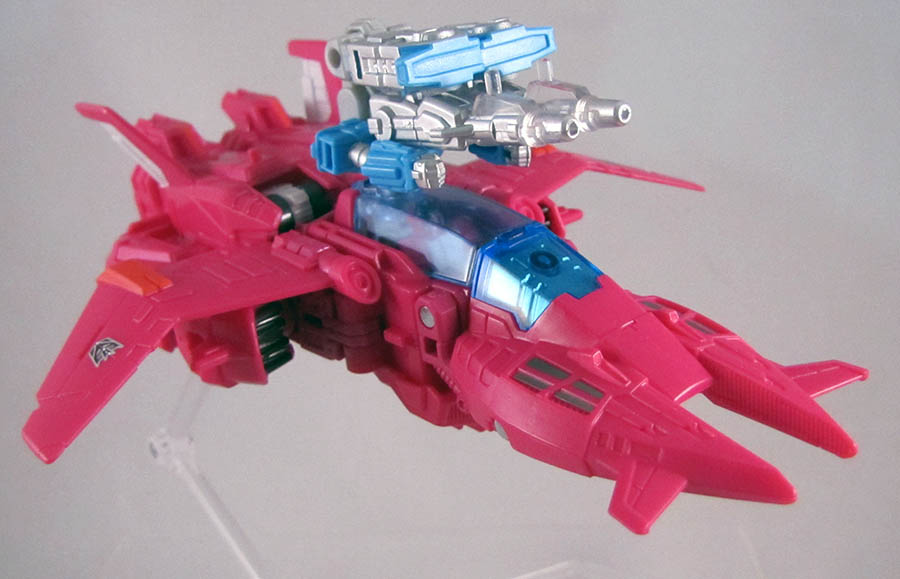 Regardless, Aimless is the best Targetmaster, and obviously if there's a proper new toy of that guy, I want it.  And so I passed on the American version and waited patiently for the Japanese version.

Misfire has Triggerhappy's legs, but everything from the crotch up is essentially new.  Sure, he keeps the same fists, biceps, and shoulder joints, but the rest of the arms and torso -- and essentially 90% of the toy's transformation -- is original.  Mind, Triggerhappy's best feature, the swoosh-swap-spin torso magic in the transformation to jet mode, is gone, so Misfire isn't going to be exactly as cool.  However, Misfire has a few small tricks of his own that make him stand out.  It takes a fairly straightforward transformation trope, flipping the nose of the vehicle back and pulling up the arms, and adds enough little levers and hinges to make it interesting.  Essentially, the arms and wings rotate and push up to the top of the torso while maintaining their vertical orientation.  It's neat and is entirely cosmetic.

The original Misfire toy was content to fold the nosecone straight back, hanging down over his butt.  The cartoon/comic model, however, had the double-pronged nose of the jet poke up over the backs of his shoulders.  This gives Misfire an interesting and unique silhouette.  This new toy happily recreates this, double-hinging the nosecone piece so it can stay pointing up rather than pointing down. 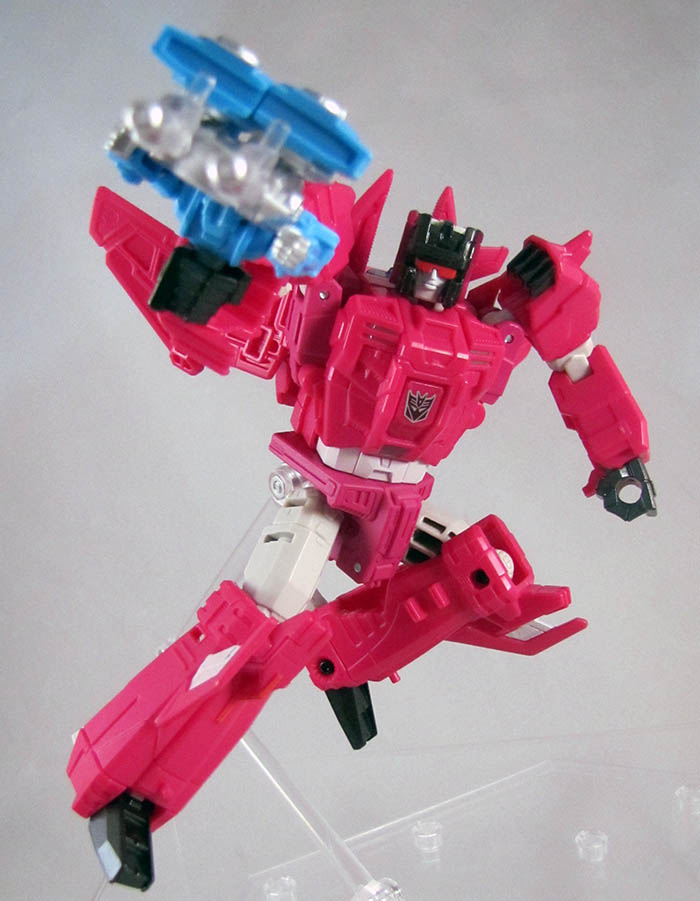 This new toy also gives Misfire his cartoon model's head, which has goggles and no antenna, rather than the original toy's singular eyes and pointy ears.  This matches the Marvel comics, the American cartoon, and the Headmasters anime, but it doesn't match the more toy-accurate design Misfire was given in the IDW comics, where he's a popular character in the MTMTE/Lost Light series.  Thanks to the head-swapping gimmick of the toyline, though, you can get a pretty good approximation of his IDW/toy head by substituting in Titan Master Ptero (Swoop).

The toy is a crazy magenta pink that I adore.  The bright blue of Aimeless and the jet's cockpit window contrasts it perfectly.  He's a pretty fuckin' toy.

I haven't seen the American one in person, so I can't tell you how pretty his pink is.