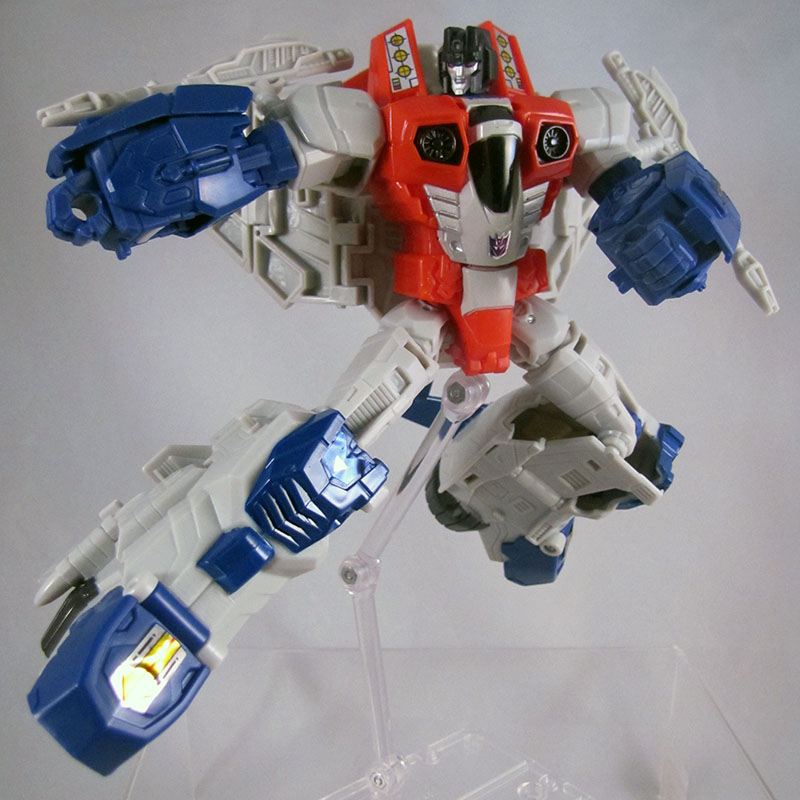 Power of the Primes Starscream is probably the toy from this line I was looking forward to the most.  Transformers fiction was giving that a little boost admittedly -- the toy is sculpted to adhere to the same Starscream design that the comics currently use.  And Starscream in the current comics (especially his portrayal in Till All Are One, which ended with an Annual just this week) is friggin' fantastic.  I've been wanting a Starscream to go with a Deluxe Windblade for so long, and the other two designs that have appeared alongside her -- Deluxe Armada Starscream and Leader King Starscream -- were not appropriate sizes for hanging out with a Deluxe Windblade.

Voyager Class is just about perfect.  It's perfect size for Starscream in general, at least fiction-wise.  (If we were going true vehicle scale we'd probably have to start doing him in Titan Class, and that's.... inconvenient in so many ways.)  If Hasbro wanted to do this Starscream toy in every Seeker variety, I'd be cool with that, and I'd buy them all. 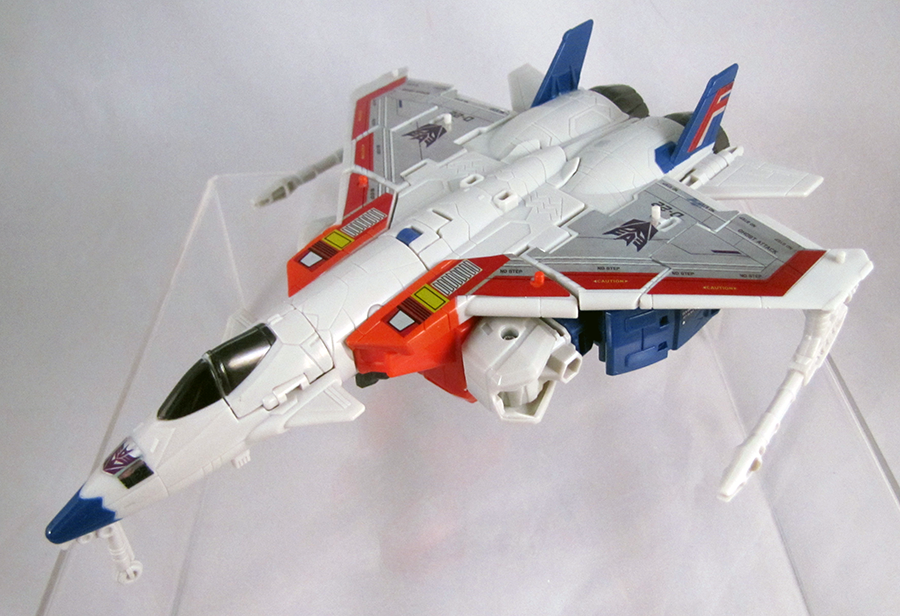 (mind, they'd have to do, like, several dozen more limbs so they could all be combiners simultaneously, but)

Plus I just like the proportions of the robot mode.  I love big punchy fists and big stompy feet.  It's a great robot mode.  It's dynamic.

The jet mode is... like 99% of every other jet Transformer.  There's a robot hanging underneath the jet parts.  Just a pair of arms and a chest, unaltered, attached under there.  But that's generally what you expect with a Transformers jet. 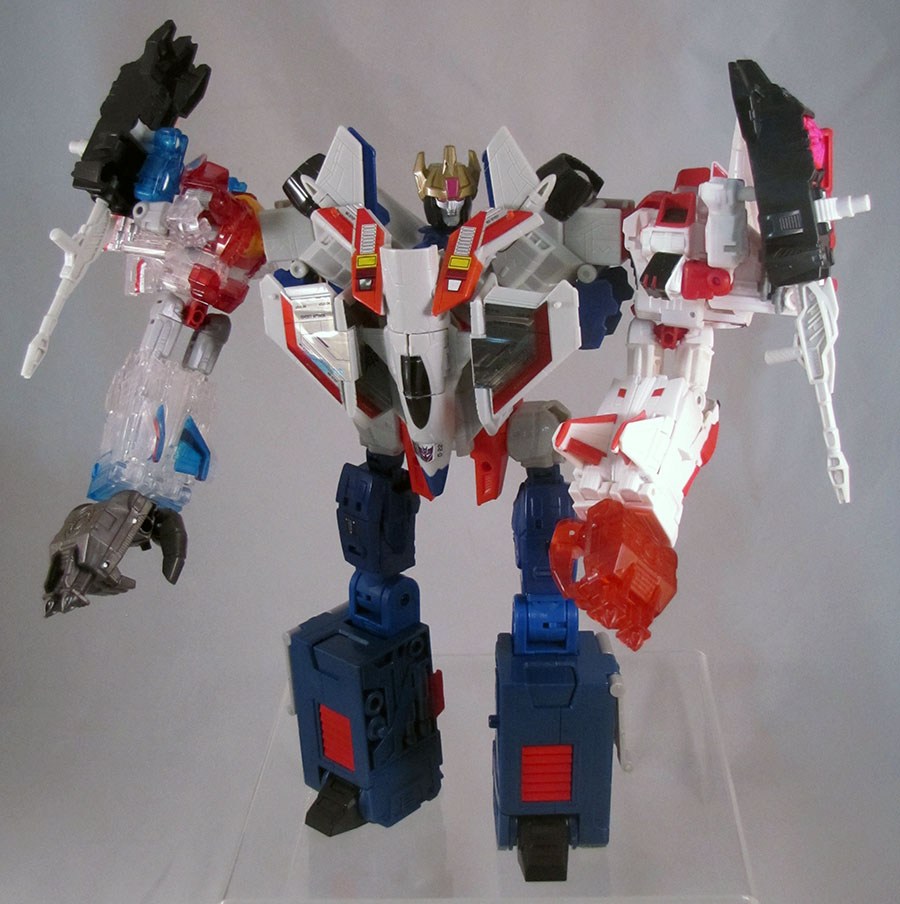 There's some to-do about how his robot mode chest cockpit is "faux kibble," but, y'know, the real jet cockpit becomes the torso mode's chest, so I'm okay with it.  As long as one of the modes uses the cockpit for a chest, I count that.  The torso mode clearly is taking some inspiration from Movie Starscream, with the big triangle shape made out of wings (and, again, with the cockpit in the middle), and I love that.  The combiner mode head is just a bigger Starscream head with a TFTM crown on it.  It makes me wish that Grimlock's combiner mode head gave him HIS crown.  They both have canonical crowns!  It could have been a nice pairing!

For a few years, the larger Transformers have started giving toys these foil stickers.  They're terrible.  They're tacky-looking, they start peeling off pretty quickly, and all-around they're just not great quality.  And they're factory-applied, so you don't even get to have the fun of ruining your toy yourself.  There's no ownership in them.  They're just there to look gross. 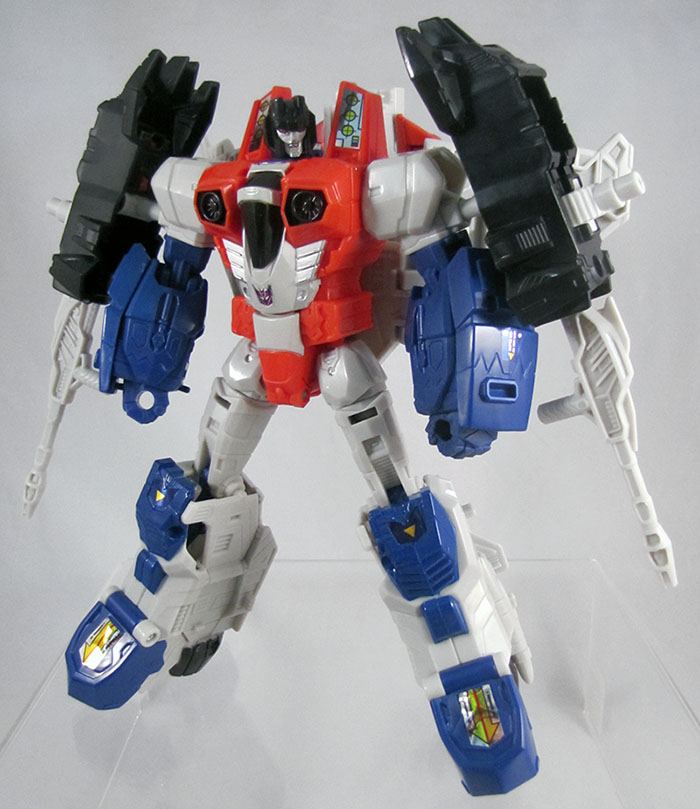 And, like, I dunno whose idea it was to use foil stickers to cover the entirety of Starscream's jet mode wings, but I think I hate them.  It looks so amazingly terrible.  The photos here don't really capture it in all its shiny, reflective glory, but the stickers just drive me mad.

And you can't pull them off, because then his wings lose their red strips and the Decepticon logos.

Sure, yeah, eventually Reprolabels will have replacements, and those stickers will be real stickers made of material that doesn't tear like Kraft singles, and be, like, matte so they mesh with the rest of the jet surface, but... not everybody's gonna want to spend more money to make their toy not look shitty.