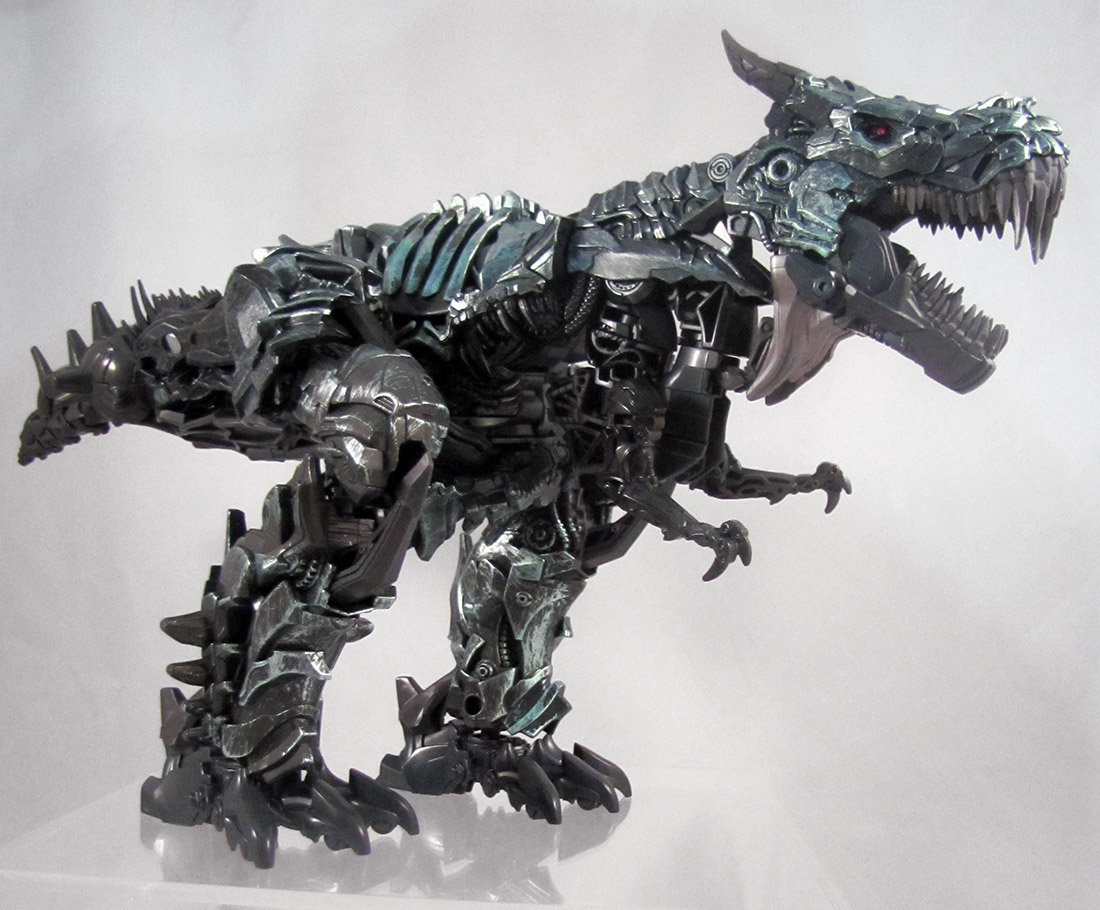 Live-action Grimlock is, uh, sort of there in the movies!  He's in about 2% of Age of Extinction, during which Optimus brutally beats him until he submits and then rides him around town a little, and then he's also sort of in The Last Knight, where I think he disappears like a third of the way through.

Thankfully, a giant robot T. rex toy is something that sells itself on its own merits.

Studio Series Grimlock is large and massive.  In robot mode he's a little taller by a smidge than the usual Leader Class, and also pretty wide.  And he looks amazingly decoed, even though he's really mostly the same plastic color all over and most of him is covered with a metallic green paint wash.  It's the incredible sculpted detail and the beefy proportions that make him look impressive, and to the eye it cheats him even bigger than he already is. 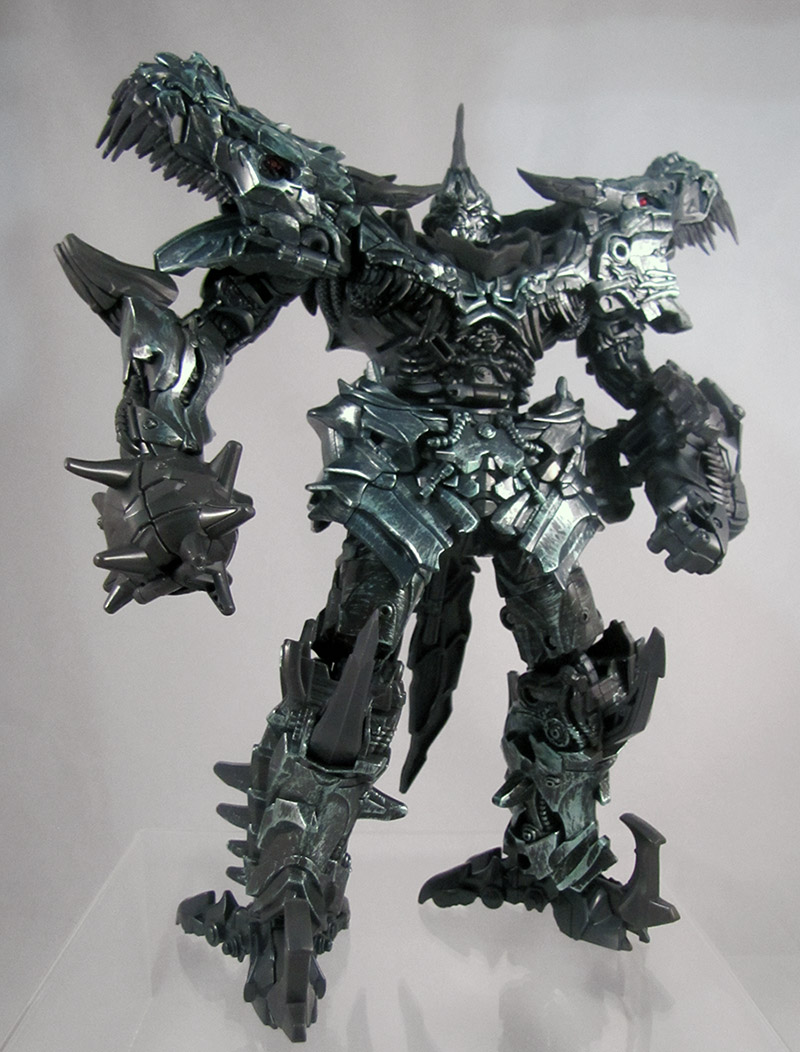 It does some weird yet impressive stuff in service of making him look as much like the movies' CGI model.  There, he has a full dinosaur head on each shoulder.  Like, a copy-pasted entire Tyrannosaurus rex head, even though he transforms into, you know, a single-headed Tyrannosaurus rex.  All of his earlier toys unsurprisingly split the head in half for transformation and put each outward-facing head on each shoulder.  This toy says nah.  He has both full heads.  But only one actually transforms into his actual Tyrannosaurs rex head.  The other splits open and integrates into his tail.

The tail is also formed out of his right arm (which ends in a spikey ball) and his coattails.  These three elements -- the head halves, the coattails, and the arm -- sort of loosely form a pretty good tail shape.  It's a better solution than the usual approach, which is "oh hey look, actually this tail pops off and becomes a weapon!"  It's interesting and fun AND it means that a third of the toy's mass isn't being used for a weapon -- it all becomes robot mode, baby.

In dinosaur mode, Studio Series Grimlock is the best thing my kids have ever seen.  I kind of have to keep it out of view or they go nuts.  (I, of course, let them handle it with supervision, I'm not a monster, but I can't have them being crazy for hours of the day.)  I don't blame them, because it's a great stompy dinosaur toy.  The only thing I think is missing is I wish its head could turn side-to side, or even up or down at all.  The transformation prevents it, but I still feel a need for it.  This is why Beast Wars Tenth Anniversary Megatron is still one of my favorite Tyrannosaurus rex Transformers -- the full neck articulation. 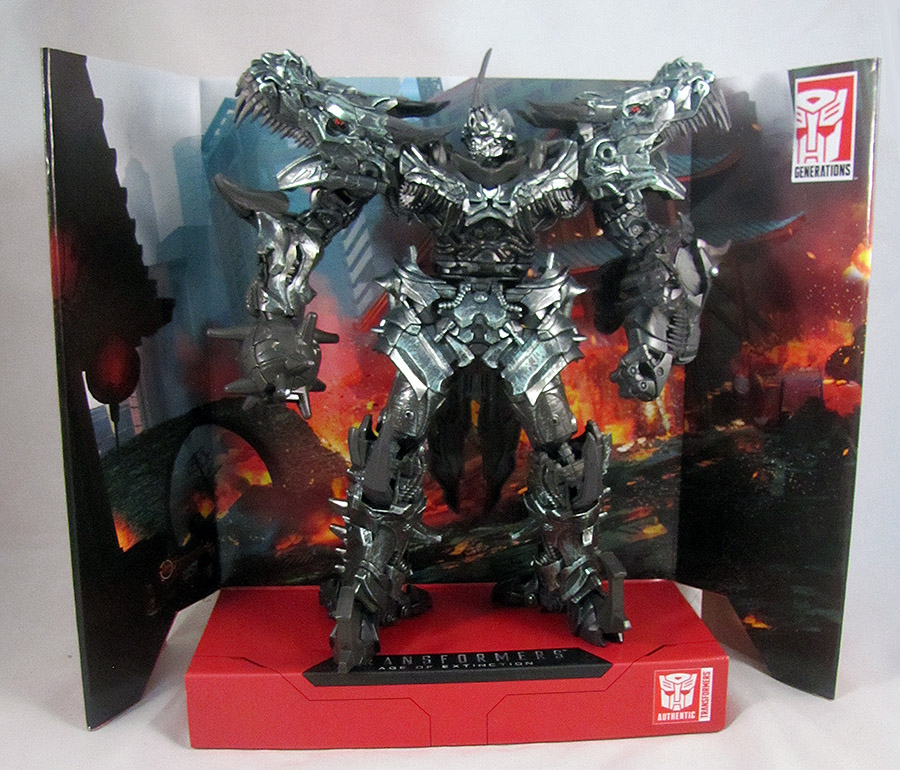 As with the other Studio Series toys, it comes with a cardboard display stand/background.  It's less appealing paired with this toy than the others only because Grimlock is so large.  He barely fits against the backdrop in robot mode, and his dinosaur mode is entirely too wide to fit onto the stand.  But this is damning with faint praise.  He's a large toy, posed on his bent knees to even fit into the packaging, and this is ultimately good.

Beyond those small complaints, there's very little wrong with this and so much right.  It justifies the entire Studio Series line all by itself.