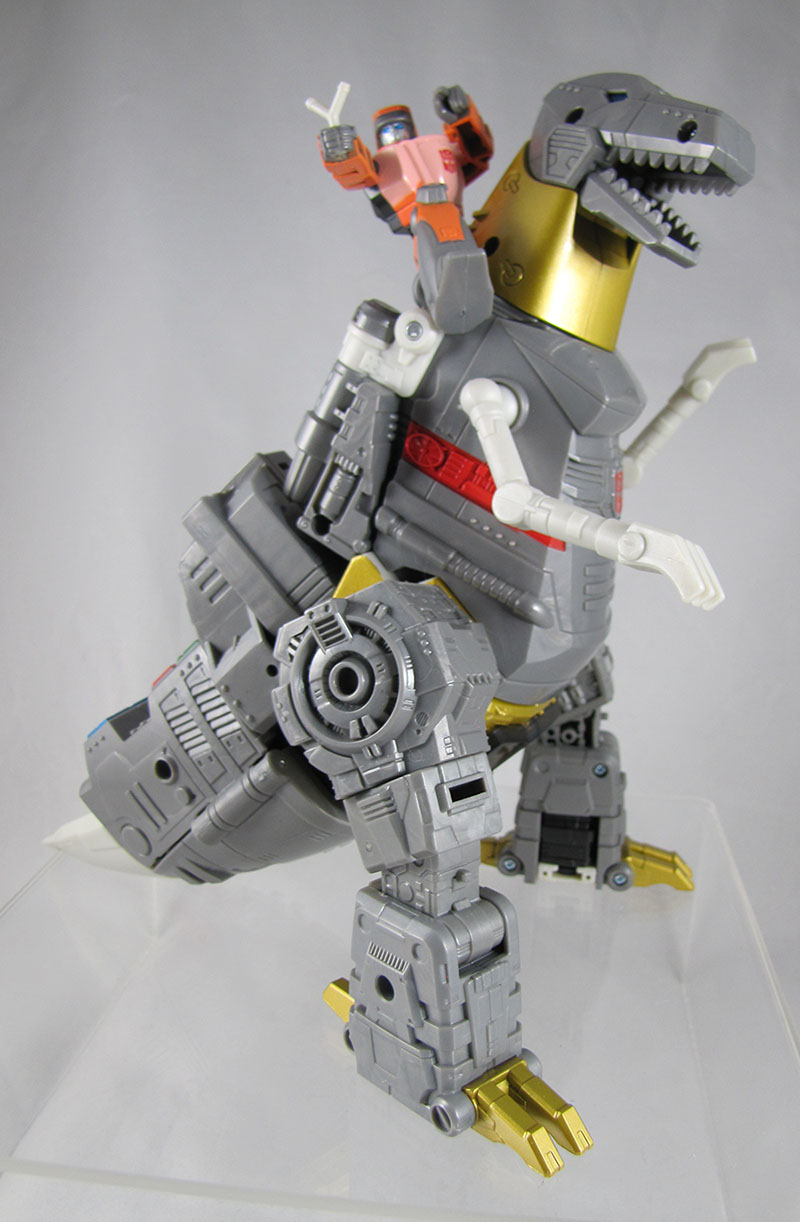 Transformers is about Robot Mode Scale now, and honestly that's the highly-addictive drug I've gotten hooked on.  And while I am definitely into robots who can stand next to each other and look the correct height -- so much so that I've re-bought so many live-action movie robots in Studio Series thus far -- sometimes it means getting a slightly ... worse...? Grimlock than I have already?   Masterpiece Grimlock is pretty dang similar to Studio Series '86 Grimlock, and I even have the fancy Marvel Comics-colored one, with the silver finish and the blue-for-black and the crown.  But it's a head or two too tall, and word is Studio Series '86 is gonna give us the other four Dinobots in turn, and I can't have one of them looking out of place.

Because, honestly, having a full set of appropriately huge Dinobots is a long-dormant dream of mine.  I mean, it's been fine to have the Dinobot combiner Volcanicus fill in for them, since robot scale means a little less when they're all combined into a super robot.  There's some wiggle room there.  (or rather there isn't, since a combiner has to fit vertically on a shelf, so that limits things)

Volcanicus shouldn't worry.  I've already found alternate display space for him.  He's a combiner and I love combiners, so he was never really in danger of disappearing into a bin. 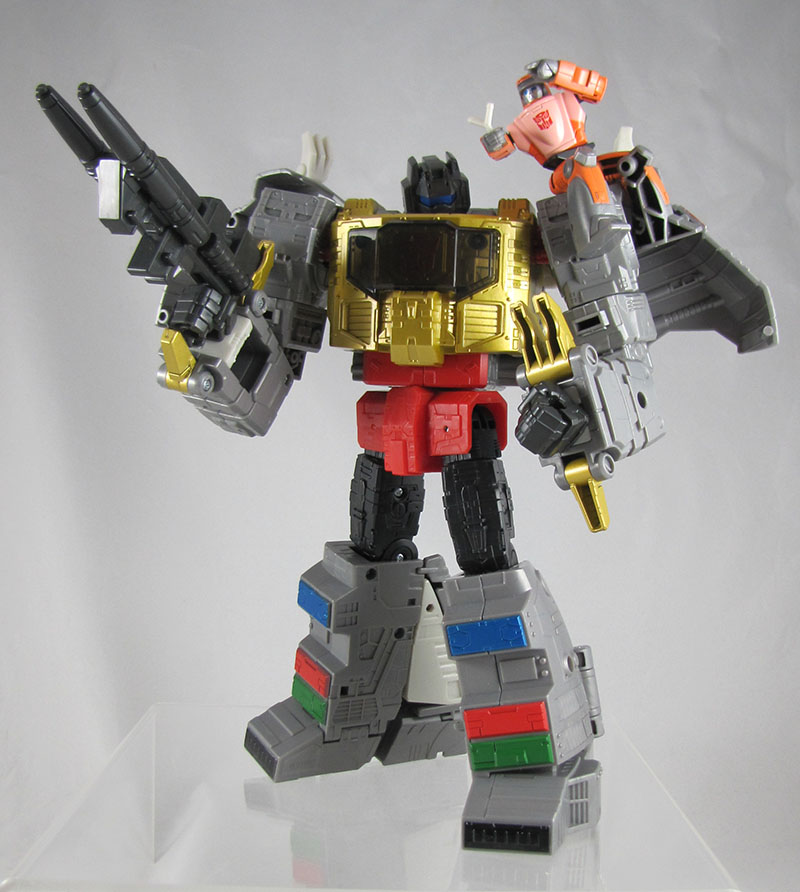 Anyway, Studio Series '86 Grimlock is pretty close in feel to Masterpiece Grimlock!  They're about the same size, and they're roughly the same visual design, and they transform very similarly.  SS86 Grimlock's a little chonkier, and the tail-to-legs transformation is a little less fussy, and he's missing the Turn-Head-Wag-Tail gimmick, nor is he electronic, and he doesn't come with a sword.  Cartoon Grimlock?  Didn't actually have a sword!  He had his double-barreled rifle in his model sheet and no sword.  And so SS86 Grimlock only comes with the rifle. 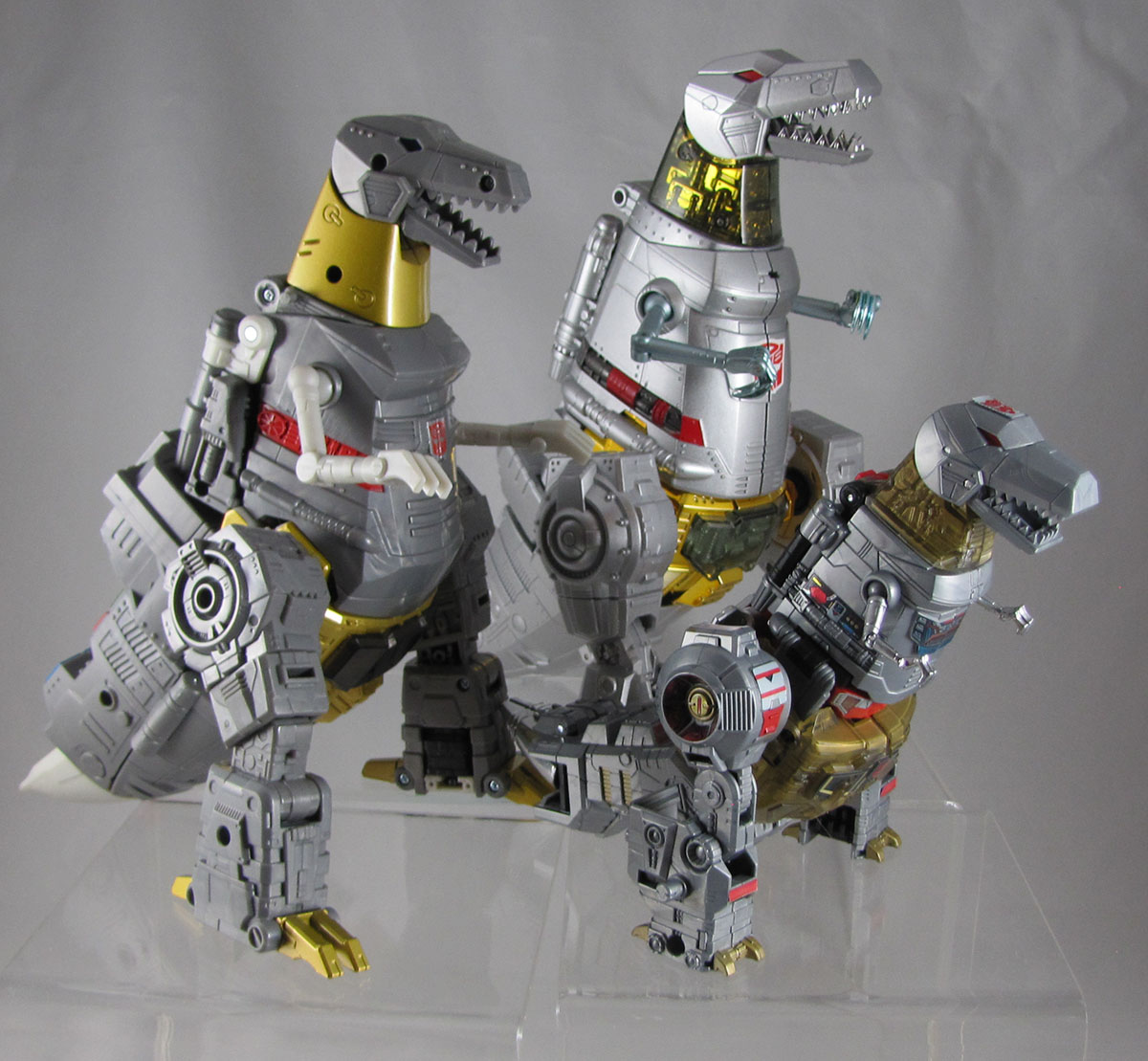 He does come with Wheelie, though!  A small, nontransforming Wheelie that exists entirely to be fit onto the top of Grimlock's dinosaur neck or robot shoulder.  He's sculpted into a permanent squat because, again, he's a little prop.  His arms are posed just enough you can get him to aim his slingshot in plenty directions.  (The slingshot does remove from the fist and I think it's a 3mm port) 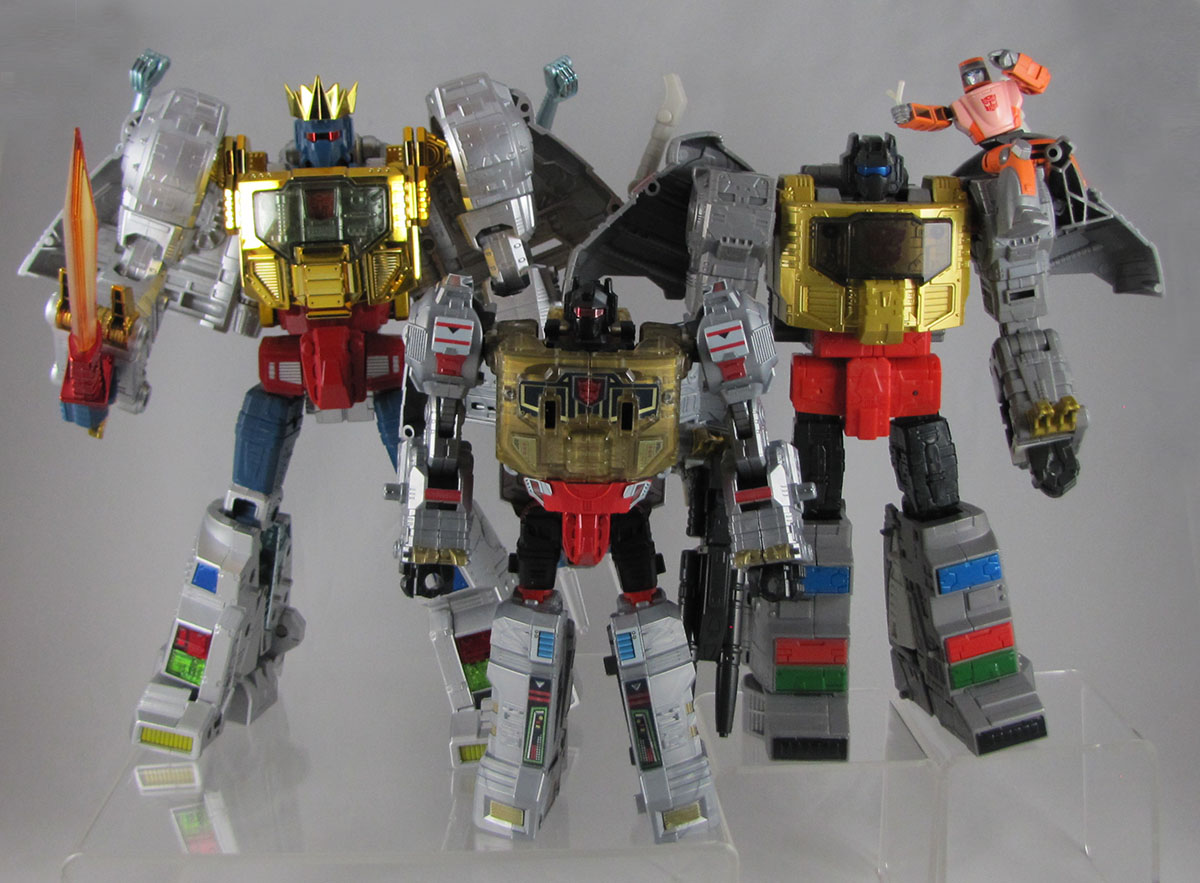 I have a perfectly fine Wheelie who's not sculpted permanently into a teabagging stance and can also transform, so I think I'll keep that one around for display.  But for those of you who missed out on Titans Return Wheelie from several years ago, this is your chance at him again.

What's better about SS86 Grimlock that isn't his precise scale?  Well, he's cheaper than MP Grimlock, for one.  Most of his joints are ratcheted, while my Masterpiece's joints are all friction-based and getting kinda floppy after twelve years.  I like the range of motion his robot mode dino-rib wings have.  His articulation is a little more solid.  There's a 5mm port for effects parts inside his dinosaur mouth.  He can steal the Masterpiece's sword (since it also used a 5mm port) and crown (it barely balances on his head, but that was true of the masterpiece too honestly). 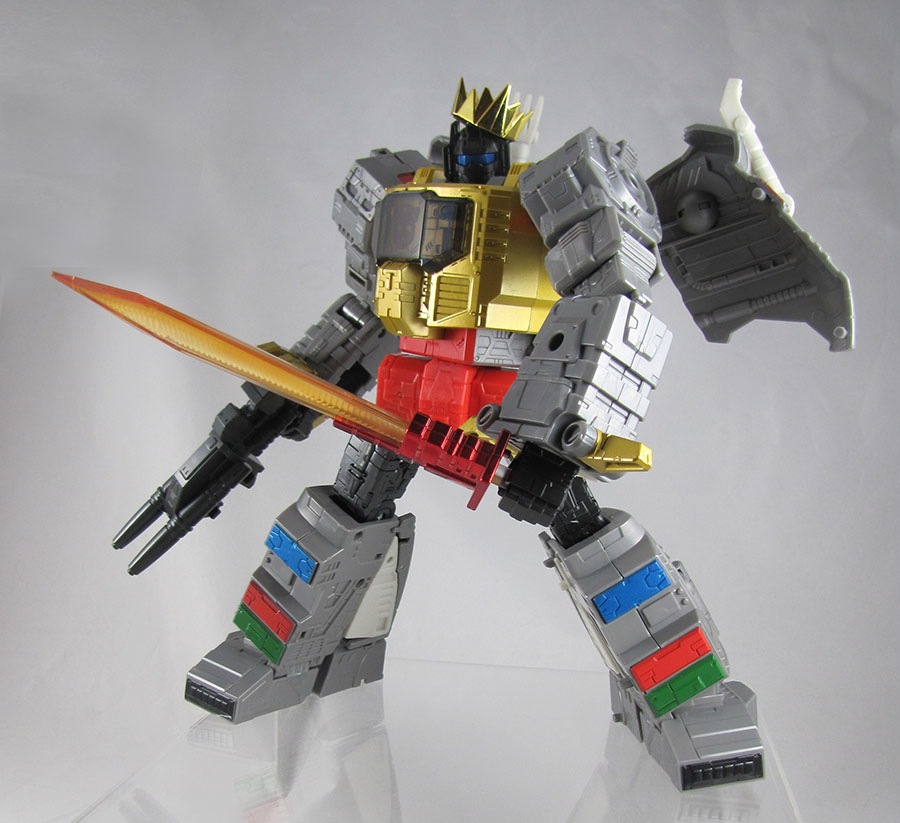 Both still transform into that ugly-ass dinosaur mode, though.  I mean, we all know dinosaurs were birds, but it's weird when you see a T. rex waddle around like an upright duck.  However, he's releasing at the same time as Beast Megatron and Fossilizer Paleotrex, so it's not like there aren't other style options for Transformers tyrannosaurs!  See, they also come in both flesh and naked.  (And both with more realistic posture.)